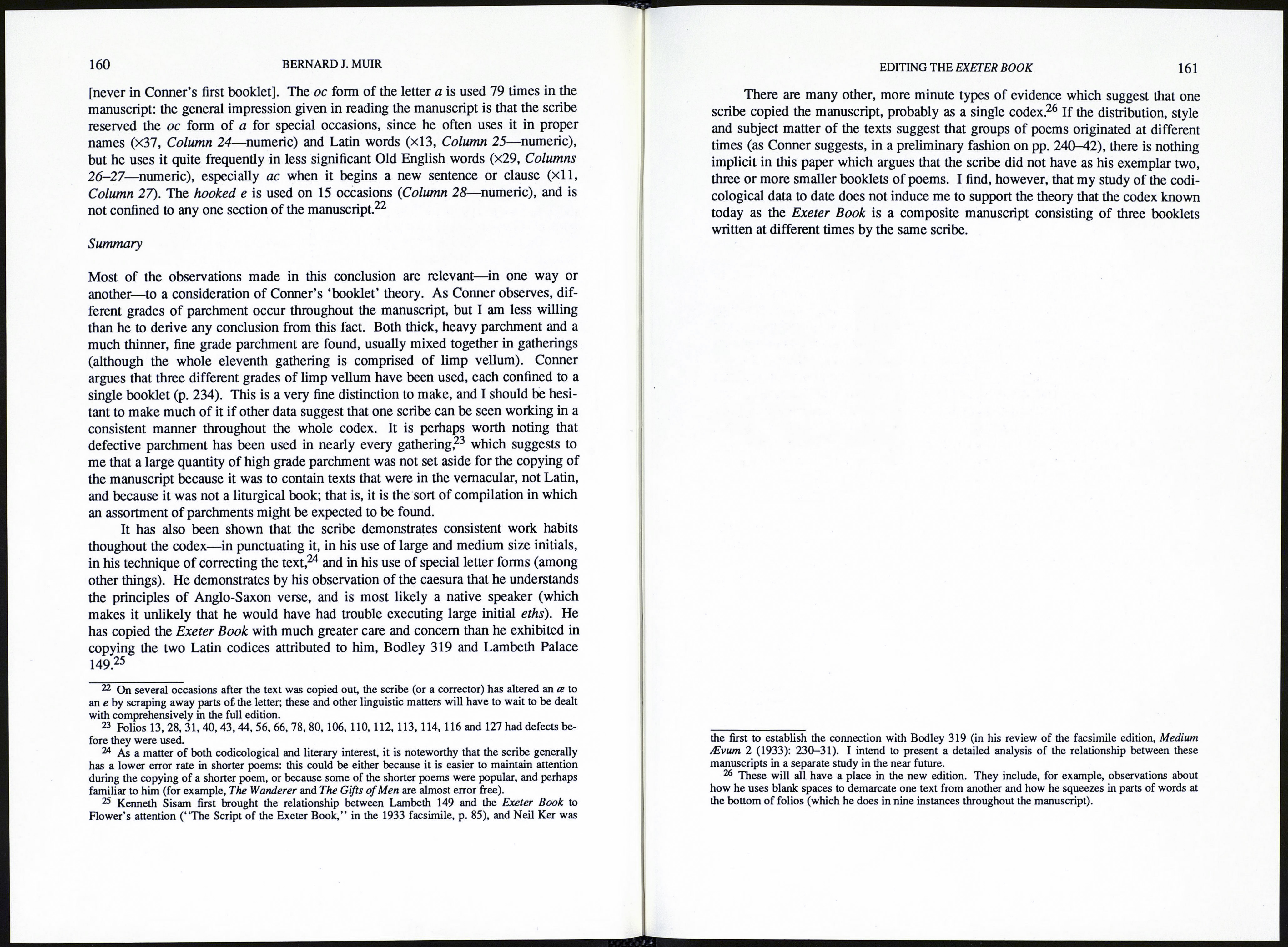 107 v.7 onfindeö: Ö is altered from f, the upward stroke of 5 is crossed by the rem¬

nant of the horizontal top stroke of the t, and then the crossbar was added.
109 v.21 tidum: i is altered; d has been altered from an I by adding a loop to it, so

that it now has a vertical ascender (which is exceptional).

115 r.l pa: a is altered from e by scraping away the tongue of the e and adding a

116 v.10 byman: у altered from i. This is a very common adjustment, at times made

during the course of the copying, and at others being made after the text
was copied out (the implications of this are explored in the edition).

118r. 12 (nu) pu: p altered from wynn by adding an ascender, fir en: r altered from
n; the serif of the foot of the first minim of the n is visible on the des¬
cender of the r.

Column 17 (logical) indicates which folios contain text in Latin. There are a few
standard abbreviations (e.g. ses for sanctus and am for amen), and sometimes one or
more whole verses are in Latin (e.g. in the macaronic ending of the Phoenix). One
text, Riddle 90, is completely in Latin. With the exclusion of literary considera¬
tions,17 there appears to be nothing remarkable about the use and distribution of
Latin words in the manuscript.

17 For example, why does the Phoenix poet use a macaronic ending? Is it to do with a spirit of ex¬
perimentation with literary forms evident elsewhere in the manuscript? Etcetera.

Punctuation and its function

The most common punctuation mark in the Exeter Book is the point (or fullstop) in a
raised position, approximately half the height of a minuscule letter above the line of
writing.18 The point standing on the line of writing appears only 10 times (Column
22—numeric) [and not at all in Conner’s second and third booklets]. The raised
point is used sparingly (less than five times per folio side) on approximately one
quarter of the folios in the manuscript [distributed almost equally in the hypothetical
booklets (Column 21—logical)].19

On several occasions (usually in lists and catalogues, or passages with a high
density of rhetorical figures), the raised point has been used at the end of a number
of consecutive verses; this is tabulated in Column 20 (logical). The number of times
points occur within a verse is so small as to appear insignificant or aberrant, and they
are much more common at the end of a b verse than after an a verse. Although the
spacing between words and particles throughout the manuscript at first appears
unpredictable (as it does in the other poetic codices), close study of the patterns of
division is beginning to suggest there may be some discernible principles at work;
these will be outlined in detail in the edition. For the moment, suffice it to say that
on only ten occasions in the whole corpus of poems are words joined together where
the caesura occurs, indicating that the scribe was aware of the principles of
versification and understood precisely what he was writing (Column 19—logical).20

The only other punctuation in the manuscript is the combination of symbols
used to mark the end of poems (and sections of longer poems); the scribe often uses
several of these at a time or repeats the same combination two or more times. Com¬
mon combinations are: the point with a diagonal slash above or after it (/); a colon
followed by a ‘seven’ (:7); a colon followed by either an undulating or a straight
dash (:~ or :—); and a ‘seven’ with an ‘umlaut’ above it ( 7 ).21

The use of three special letter forms is charted in the database. The curved, ‘upside-
down’ type r (Column 23—numeric) is used 6 times, always at the end of a line

18 The dot which appears frequently at the end of the long tail of final a where the writing instru¬
ment leaves the parchment is not regarded in the edition as a deliberate attempt by the scribe to punctu¬
ate without wasting movement. When he wishes to place a point after an a, he does so very clearly, as
can be seen at f. 85 r.4 and .16 (in Widsith).

19 Although I thought at times that I could distinguish between points with different elevations, the
lack of any perceivable consistency or rationale in the use of such a system led me to abandon further
investigation of this possibility.

20 In order to make any sort of statement about word spacing, an arbitrary decision had to be made
as to how great a space had to be present before two words or particles became separate entities. After
reading the whole manuscript letter by letter, I decided that the minimal distance would be 2 mm.,
which is the figure upon which statements regarding word spacing are based in this paper. Of course, I
did not measure the space between every letter in the manuscript, relying after a period on my visual
judgment.