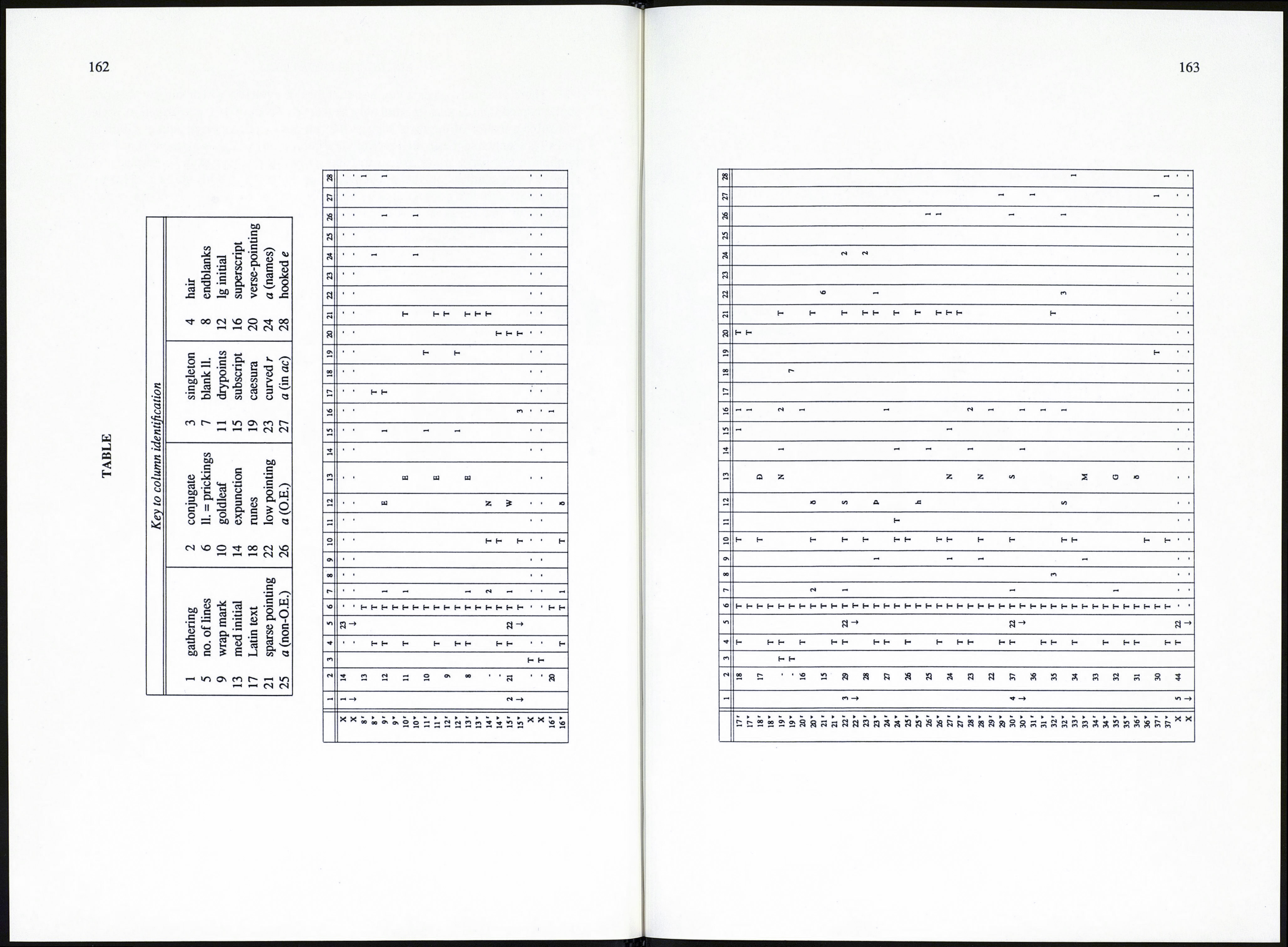 [never in Conner’s first booklet]. The oc form of the letter a is used 79 times in the
manuscript: the general impression given in reading the manuscript is that the scribe
reserved the oc form of a for special occasions, since he often uses it in proper
names (x37, Column 24—numeric) and Latin words (xl3, Column 25—numeric),
but he uses it quite frequently in less significant Old English words (x29, Columns
26-27—numeric), especially ac when it begins a new sentence or clause (xll,
Column 27). The hooked e is used on 15 occasions (Column 28—numeric), and is
not confined to any one section of the manuscript.22

Most of the observations made in this conclusion are relevant—in one way or
another—to a consideration of Conner’s ‘booklet’ theory. As Conner observes, dif¬
ferent grades of parchment occur throughout the manuscript, but I am less willing
than he to derive any conclusion from this fact. Both thick, heavy parchment and a
much thinner, fine grade parchment are found, usually mixed together in gatherings
(although the whole eleventh gathering is comprised of limp vellum). Conner
argues that three different grades of limp vellum have been used, each confined to a
single booklet (p. 234). This is a very fine distinction to make, and I should be hesi¬
tant to make much of it if other data suggest that one scribe can be seen working in a
consistent manner throughout the whole codex. It is perhaps worth noting that
defective parchment has been used in nearly every gathering,23 which suggests to
me that a large quantity of high grade parchment was not set aside for the copying of
the manuscript because it was to contain texts that were in the vernacular, not Latin,
and because it was not a liturgical book; that is, it is the sort of compilation in which
an assortment of parchments might be expected to be found.

It has also been shown that the scribe demonstrates consistent work habits
thoughout the codex—in punctuating it, in his use of large and medium size initials,
in his technique of correcting the text,24 and in his use of special letter forms (among
other things). He demonstrates by his observation of the caesura that he understands
the principles of Anglo-Saxon verse, and is most likely a native speaker (which
makes it unlikely that he would have had trouble executing large initial eths). He
has copied the Exeter Book with much greater care and concern than he exhibited in
copying the two Latin codices attributed to him, Bodley 319 and Lambeth Palace
149.25

22 On several occasions after the text was copied out, the scribe (or a corrector) has altered an œ to
an e by scraping away parts of the letter; these and other linguistic matters will have to wait to be dealt
with comprehensively in the full edition.

24 As a matter of both codicological and literary interest, it is noteworthy that the scribe generally
has a lower error rate in shorter poems: this could be either because it is easier to maintain attention
during the copying of a shorter poem, or because some of the shorter poems were popular, and perhaps
familiar to him (for example, The Wanderer and The Gifts of Men are almost error free).

25 Kenneth Sisam first brought the relationship between Lambeth 149 and the Exeter Book to
Flower’s attention (“The Script of the Exeter Book,” in the 1933 facsimile, p. 85), and Neil Ker was

There are many other, more minute types of evidence which suggest that one
scribe copied the manuscript, probably as a single codex.26 If the distribution, style
and subject matter of the texts suggest that groups of poems originated at different
times (as Conner suggests, in a preliminary fashion on pp. 240-42), there is nothing
implicit in this paper which argues that the scribe did not have as his exemplar two,
three or more smaller booklets of poems. I find, however, that my study of the codi¬
cological data to date does not induce me to support the theory that the codex known
today as the Exeter Book is a composite manuscript consisting of three booklets
written at different times by the same scribe.

the first to establish the connection with Bodley 319 (in his review of the facsimile edition, Medium
Ævum 2 (1933): 230-31). I intend to present a detailed analysis of the relationship between these
manuscripts in a separate study in the near future.

26 These will all have a place in the new edition. They include, for example, observations about
how he uses blank spaces to demarcate one text from another and how he squeezes in parts of words at
the bottom of folios (which he does in nine instances throughout the manuscript).