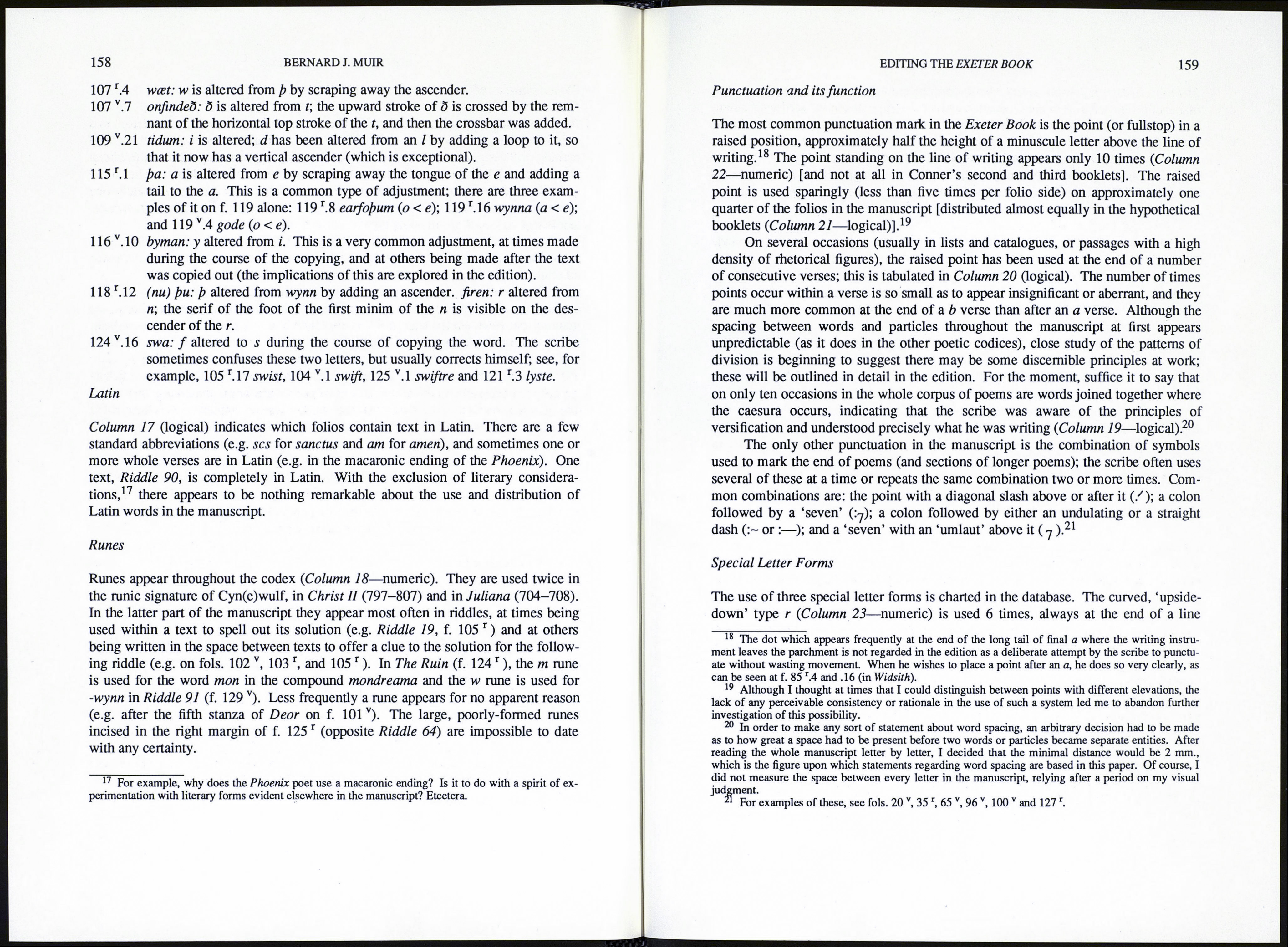 Columns 12-13 chart where large and medium size initials occur respectively.
Uppercase and lowercase forms are used to indicate the shape of the initial as it
appears in the manuscript. It was found upon measuring all the initials in the
manuscript that the scribe seems to have had a notional size for a large or a medium
size initial—30 and 15 mm. respectively. In the database, therefore, large initials are
those which are 30 mm. or larger, and medium are from 15-29 mm. This is perhaps
awkwardly arbitrary in that a 29 mm. initial is very close to being large, but there
are not many examples such as this.14 The scribe seems to have tried consciously to
have some sort of initial on nearly every opening, as if for aesthetic effect, but it is
not immediately apparent that there is a rationale behind the choice between a large
and medium initial.15 [There are twice as many medium initials as large ones, but
they do not alternate in a predictable fashion, there being a high concentration of ini¬
tials at the beginning of the riddles.]

Conner states that the decorative initials of the hypothetical first booklet are
executed more competently than those of the second and third, “a judgment which
cannot be readily demonstrated in the facsimile, but...can be seen in a good light at
Exeter” (pp. 235-36), but a comparison of sample initials from each booklet failed
to convince me of this. Compare, for example, the following initials: f. 15r wynn, f.
70 v thorn and f. 117r wynn; f. 41 v / and f. 107 v /; and, f. 87r F and f. 98 r A.
Admittedly, the scribe has added the crossbar to an uppercase eth in an unusual
manner on one occasion (f. 58 v), but this is most easily explained as an oversight,
and does not suggest immediately that he may have been unused to drawing eths if
his ‘‘copying tasks were dominated by Latin texts” (Conner, p. 236); in fact, it is
observed below that the scribe does his best work when copying vernacular texts.

The scribe corrects the manuscript in several ways: he underpoints letters to be
ignored (expunction—Column 16, numeric); he adds superscript or subscript letters,
with or without an insertion sign (Columns 14 and 15 respectively—numeric);16 he
alters a letter by scraping bits away and adding strokes to change it into another
letter; and, he carefully scrapes away one or more letters and enters the new reading.

14 The size of every initial is listed in the edition. For purposes of clarification and consistency, ini¬
tials smaller than fifteen mm. but larger than a normal size capital are called large capitals in the edi¬
tion.

15 There is further evidence of the scribe’s concern for aesthetics at the end of Christ II (folios
31 v-32 r ) where—knowing from his exemplar exactly how much text remained to be copied—he be¬
gan to space out his text so that it would end near the bottom of a folio, allowing him to start the next
major poem (Christ ІІГ) at the top of a new folio and opening; despite his efforts, he still finished three
and a half lines short of the end of f. 32 r.

16 With the exception of two ys on f. 43 v, all the subscript alterations to the texts (11 in number)
are identical: a slightly smaller g has been added just below the line of writing—these all appear to be
in the principal scribe’s hand. The disposition of the two exceptional letters—they are a considerable
distance below the line of writing—suggests that they were added by a different person.

Most examples of the last type of correction have never been documented, as noted
above (over 400 of them). The scribe makes this sort of correction so skilfully that
they are often detectable only when the manuscript is held up at different angles to a
strong light source. Even then they are not always visible, and must be detected by
passing the hand lightly over the surface of the text and feeling for the slight
abrasiveness left by the scraping.

Expunction is the least common method of correction (if superscript and sub¬
script corrections are taken together), though it is used throughout the manuscript.
[Subscript additions are the only type of correction not found in all three of Conner’s
booklets, there being none in the third.] The second most common method of alter¬
ing a reading is by scraping away from and adding bits to an existing letter; although
these alterations are visible in the manuscript, many have not been noted.

The corrections described here illustrate different types of alterations made by
the scribe; the same techniques of correcting appear uniformly throughout the
manuscript. Photographs of two folios on which a number of alterations have been
made are reproduced as Figures 67 and 68.

17 v The scribe has made five corrections on this folio, only one of which is

above; sped (.13): wynn is altered to s by scraping away part of its diago¬

nal stroke; bryttaö (.19-20): final Ö is altered from f, and cengum (.20): n is
written over a g (which is still partly visible in the facsimile). (Figure 67)
60 v Three of the four alterations to the text of this folio are noted in ASPR III

(because they are visible in the facsimile): eastan (.6): first a has an
unerased descender; sceawiap (.8): original final n altered to p\ onmearm
stane (.12): e of mearm expuncted, and the r erased (though still
visible)—these changes were made after the text had been copied;
sidwegum (.14): there is an expunction sign in the loop of the g. (Fig¬
ure 68)

63 r.5 gefremmap: p is altered from n by erasing 2 elements and adding an

ascender and a descender; the same adjustment is made at 64r.19 to
sipiap.

89 v.2 torhtre: the scribe first made a descender, then changed his mind and made

an о by scraping away the descender; note the flat side of the o.

94 v.19 grorn: 1st r is altered from n: the scribe traced over the first minim and

extended it below the line.

105 v.2 seomaÖ: Ö is altered from d by adding a crossbar. The crossbar is not visi¬

ble in the facsimile so that ASPR III records the manuscript reading as seo
mad and emends the text unnecessarily. The scribe made six other adjust¬
ments to the text on this folio, none of which is noted in ASPR III.