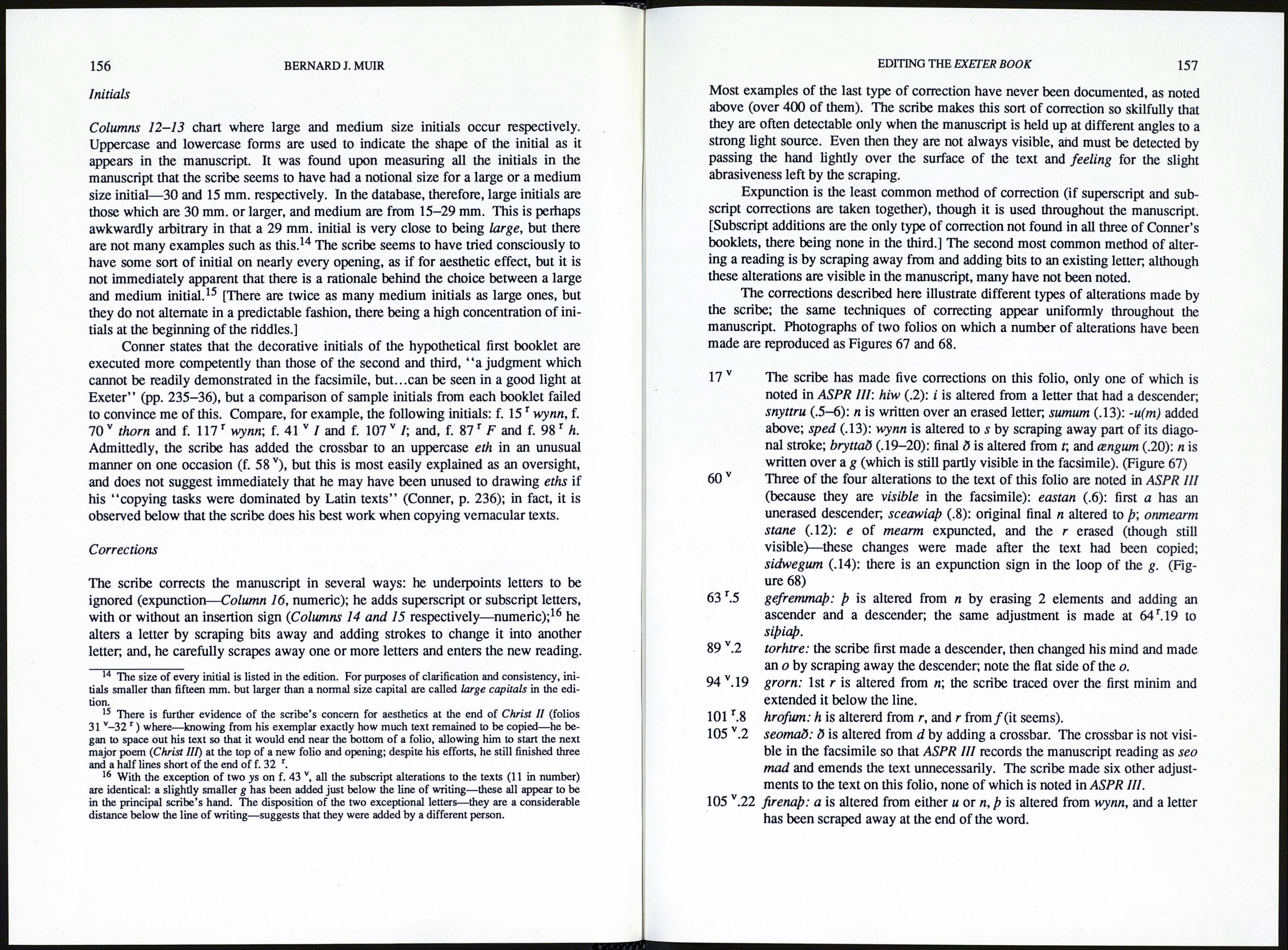 Column 9 (numeric) indicates where text wrap marks appear.11 In all but one
case, these resemble a reversed 5-shaped scroll placed before the designated text; on
f. 125 v (line 17) before gierwed a double forward-sloping slash is used ( // ). [Wrap
marks appear in all three hypothetical booklets.]

Column 10 (logical) indicates folios on which there are traces of goldleaf. The
presence of these traces in a manuscript lacking illumination indicates that at some
stage after the Exeter Book was copied, and probably when its texts could no longer
be understood, it became a repository for sheets of goldleaf used to decorate other
manuscripts produced in the scriptorium. The high number of folios on which traces
can still be found today (90) indicates that the scriptorium was well-equipped and
well-endowed in its heyday.

Column 11 (logical) indicates where drypoint etchings occur, usually in the left
or right margins, but in one instance in the centre of the bottom margin (f. 123r).
Förster notes only decorative etchings (p. 60), and thus does not include the series of
diagonal slashes on f. 59 v which Conner lists as the first drawing in the manuscript
(p. 237). The drypoints on folios 24 v and 47 v were not noticed by Conner (or
Förster), who argues that the absence of drypoints from the first hypothetical booklet
serves to differentiate it from the second and third—an argument no longer valid.
[He also observes that the unique orientation of the only drypoint in the third
booklet—it is upsidedown—serves to differentiate it from the second.]

Another previously unnoticed drypoint is found on folio 96г. I had suspected
its presence when in Exeter, but all that could be seen with the naked eye and an
ultra-violet lamp were faint curving lines in the lower right hand margin, which I
thought might be part of another robed figure. Figure 63 (an ultra-violet photograph)
shows that this is indeed the case. The head of the figure is opposite lines 13-14,
and his feet touch the bottom of the folio. Unlike the gowned figure on 87 v which
seems to be stepping forward (Figure 64), this figure appears to be standing still.
Although details are very hard to discern, the robe of the figure on 96r seems to
have more elaborate folds than that of the figure on 87 v. In addition to the full
length figure, a small, long-haired, disembodied head can be seen below the last
word on the page (sellend). A hand is holding up a tilted drinking vessel in front of
the head. It is possible that the rest of the body was also drawn originally, but if so,
it is no longer visible.

Figure 61 shows the three etchings on f. 24 v. This style of vine and tendril
patterning is unique in the manuscript. On f. 47 v etchings appear in the top and left
margins. These are quite faint, but appear to be letter forms executed in a rather
crude style (perhaps including eth and wynn among the more recognizable shapes),

11 These text wrap marks are placed before text that could not be fitted in at the end of a line; the
scribe writes the text at the end of the preceding or following line, and places the symbol before it, in¬
dicating that the designated text is not part of the line in which it appears. Wrap marks in the shape of
animals and grotesques are common in elaborate Gospel books [such as The Book of Kells). Irish
scribes called them ‘tum-in-the-path’ (cor fa casan) or ‘head-under-the-wing’ (ceann fa eitil).

quite unlike anything found elsewhere in the manuscript. Those in the left margin
start approximately opposite the third line of text and finish opposite the eleventh.
There are two in the top margin over the first word of line one of the text, most
closely resembling an О and a P. As is the case with the diagonal slashes, these
etchings have no artistic merit and should not be considered ornamentation in the
manuscript.

The previously noted drypoints are:

from sleeves with fingers pointing downwards in the left margin of f. 95 v
opposite lines 1-14 (Figure 62);

7 - a rider on horseback (upsidedown) in the centre of the bottom margin of f. 123r

(which did not come out clearly in the u-v photograph).

On folio 112r there are 2 sets of ribbon-like lines incised across lines 6-7 and
8-14, and on the verso a group of intersecting incised strokes opposite lines 3-8 in
the left margin. There are also very faint curving lines suggesting the presence of
drypoints in the margins of two other folios (1061 and 121 v), but the technology
either to verify their presence or to recover them is not available at this time. Förster
thinks that the drypoints were added later, but Conner is right in observing that in
several instances the writing goes over the drawings, and that they must therefore
have been executed before the text was copied (p. 237).

It should also be noted that in seven instances the scribe has pressed hard
enough when making the drypoint to leave an impression of the etching on the folio
beneath it.12 This means that—for whatever reason—the scribe made these etchings
after the gatherings were in a state of final preparation awaiting the copying of the
text—even the upsidedown horseman.13

13 It seems unlikely, for example, that he was whiling away the time while someone prepared ink
for him, since the drawings appear so frequently. Moreover, it is possible that they were not all made
by the same person, since they are executed with varying degrees of skill—for example, the initials on
95 v are far superior to those on 80r. As there are no drawings incorporated in the text proper, it can¬
not even be ascertained if the drypoints are by the scribe who copied the text. In short, a great deal of
analysis of the style and disposition of the drypoints remains to be done.