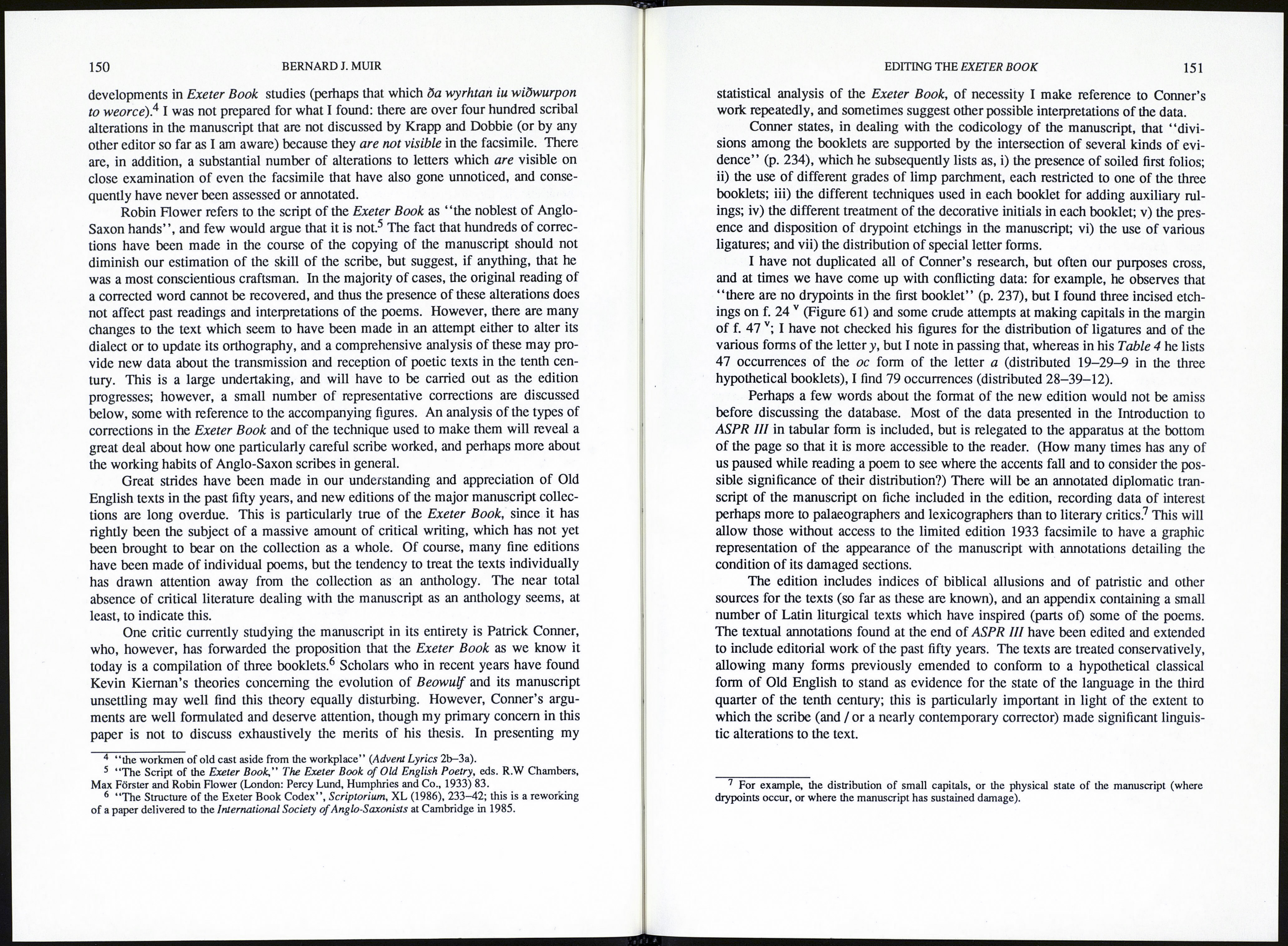 For the past two years I have been working on a new edition of Exeter Cathedral
Library MS 3501, better known as the Exeter Book, and in July-August 1988 spent
four weeks conducting a thorough examination of the manuscript in situ} Since an
optimistic estimated completion date for the new edition is approximately three
years from now, it seems advisable to offer a summary of some of my observations
and conclusions at this point rather than withholding information which may be of
use to others and of advantage to the progress of Exeter Book studies. Apart from
some introductory remarks, this paper is a discussion of the Table below, a database
summarizing a large amount of information about the Exeter Book, which can be
manipulated in various ways.2

In the Preface to the 1936 edition of the Exeter Book, Dobbie writes, “The text
has been based on the admirably clear facsimile edition of the Exeter Book pub¬
lished in 1933, with the introductory chapters by Max Förster, R.W. Chambers, and
Robin Flower”.3 Like Dobbie and many other editors since his time, I too believed
that the facsimile was of such excellent quality that there would probably be little to
be gained from an extended examination of the manuscript itself, but went to Exeter
in the hope of discovering some unturned stone which might lead to new

1 I should like to thank John Stirling, Librarian of Exeter University, for granting me permission to
consult the manuscript on a daily basis and for allowing ultra-violet photographs to be made of some of
the manuscript’s folios, and also Peter Thomas, Assistant Librarian of Exeter Cathedral, for being most
helpful and offering assistance whenever it was needed.

For example, it might be desirable to compare punctuation patterns, correction techniques and the
distribution of special letter forms in arguing the number of scribes involved in copying the manuscript.

3 G.F. Krapp, E. van K. Dobbie, eds., The Exeter Book, Anglo-Saxon Poetic Records ІП (New
York: Columbia U.P., 1936; henceforth ASPR III). Krapp and Dobbie indicate in their notes to Christ
(p. 247) that, though they did not consult the manuscript itself, they have used Ker’s readings for the
first folio, obtained using ultra-violet photography.