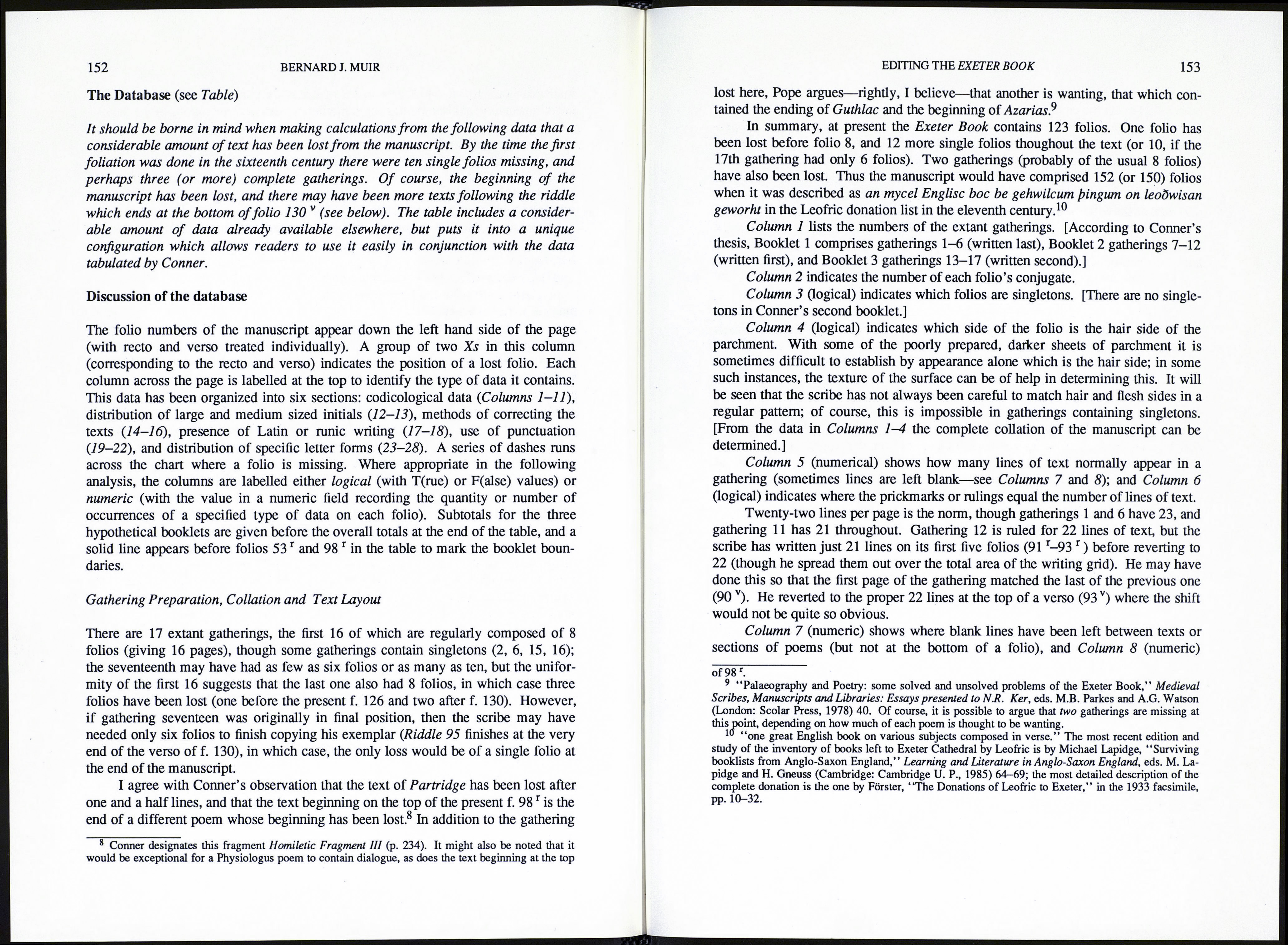 developments in Exeter Book studies (perhaps that which 5a wyrhtan iu wiöwurpon
to weorce).4 I was not prepared for what I found: there are over four hundred scribal
alterations in the manuscript that are not discussed by Krapp and Dobbie (or by any
other editor so far as I am aware) because they are not visible in the facsimile. There
are, in addition, a substantial number of alterations to letters which are visible on
close examination of even the facsimile that have also gone unnoticed, and conse¬
quently have never been assessed or annotated.

Robin Flower refers to the script of the Exeter Book as “the noblest of Anglo-
Saxon hands”, and few would argue that it is not.5 The fact that hundreds of correc¬
tions have been made in the course of the copying of the manuscript should not
diminish our estimation of the skill of the scribe, but suggest, if anything, that he
was a most conscientious craftsman. In the majority of cases, the original reading of
a corrected word cannot be recovered, and thus the presence of these alterations does
not affect past readings and interpretations of the poems. However, there are many
changes to the text which seem to have been made in an attempt either to alter its
dialect or to update its orthography, and a comprehensive analysis of these may pro¬
vide new data about the transmission and reception of poetic texts in the tenth cen¬
tury. This is a large undertaking, and will have to be carried out as the edition
progresses; however, a small number of representative corrections are discussed
below, some with reference to the accompanying figures. An analysis of the types of
corrections in the Exeter Book and of the technique used to make them will reveal a
great deal about how one particularly careful scribe worked, and perhaps more about
the working habits of Anglo-Saxon scribes in general.

Great strides have been made in our understanding and appreciation of Old
English texts in the past fifty years, and new editions of the major manuscript collec¬
tions are long overdue. This is particularly true of the Exeter Book, since it has
rightly been the subject of a massive amount of critical writing, which has not yet
been brought to bear on the collection as a whole. Of course, many fine editions
have been made of individual poems, but the tendency to treat the texts individually
has drawn attention away from the collection as an anthology. The near total
absence of critical literature dealing with the manuscript as an anthology seems, at
least, to indicate this.

One critic currently studying the manuscript in its entirety is Patrick Conner,
who, however, has forwarded the proposition that the Exeter Book as we know it
today is a compilation of three booklets.6 Scholars who in recent years have found
Kevin Kieman’s theories concerning the evolution of Beowulf and its manuscript
unsettling may well find this theory equally disturbing. However, Conner’s argu¬
ments are well formulated and deserve attention, though my primary concern in this
paper is not to discuss exhaustively the merits of his thesis. In presenting my

4 “the workmen of old cast aside from the workplace” (Advent Lyrics 2b-3a).

of a paper delivered to the International Society of Anglo-Saxonists at Cambridge in 1985.

statistical analysis of the Exeter Book, of necessity I make reference to Conner’s
work repeatedly, and sometimes suggest other possible interpretations of the data.

Conner states, in dealing with the codicology of the manuscript, that “divi¬
sions among the booklets are supported by the intersection of several kinds of evi¬
dence” (p. 234), which he subsequently lists as, i) the presence of soiled first folios;
ii) the use of different grades of limp parchment, each restricted to one of the three
booklets; iii) the different techniques used in each booklet for adding auxiliary rul¬
ings; iv) the different treatment of the decorative initials in each booklet; v) the pres¬
ence and disposition of drypoint etchings in the manuscript; vi) the use of various
ligatures; and vii) the distribution of special letter forms.

I have not duplicated all of Conner’s research, but often our purposes cross,
and at times we have come up with conflicting data: for example, he observes that
“there are no drypoints in the first booklet” (p. 237), but I found three incised etch¬
ings on f. 24 v (Figure 61) and some crude attempts at making capitals in the margin
of f. 47 v; I have not checked his figures for the distribution of ligatures and of the
various forms of the letter y, but I note in passing that, whereas in his Table 4 he lists
47 occurrences of the oc form of the letter a (distributed 19-29-9 in the three
hypothetical booklets), I find 79 occurrences (distributed 28-39-12).

Perhaps a few words about the format of the new edition would not be amiss
before discussing the database. Most of the data presented in the Introduction to
ASPR III in tabular form is included, but is relegated to the apparatus at the bottom
of the page so that it is more accessible to the reader. (How many times has any of
us paused while reading a poem to see where the accents fall and to consider the pos¬
sible significance of their distribution?) There will be an annotated diplomatic tran¬
script of the manuscript on fiche included in the edition, recording data of interest
perhaps more to palaeographers and lexicographers than to literary critics.7 This will
allow those without access to the limited edition 1933 facsimile to have a graphic
representation of the appearance of the manuscript with annotations detailing the
condition of its damaged sections.

The edition includes indices of biblical allusions and of patristic and other
sources for the texts (so far as these are known), and an appendix containing a small
number of Latin liturgical texts which have inspired (parts oí) some of the poems.
The textual annotations found at the end of ASPR III have been edited and extended
to include editorial work of the past fifty years. The texts are treated conservatively,
allowing many forms previously emended to conform to a hypothetical classical
form of Old English to stand as evidence for the state of the language in the third
quarter of the tenth century; this is particularly important in light of the extent to
which the scribe (and / or a nearly contemporary corrector) made significant linguis¬
tic alterations to the text.

7 For example, the distribution of small capitals, or the physical state of the manuscript (where
drypoints occur, or where the manuscript has sustained damage).