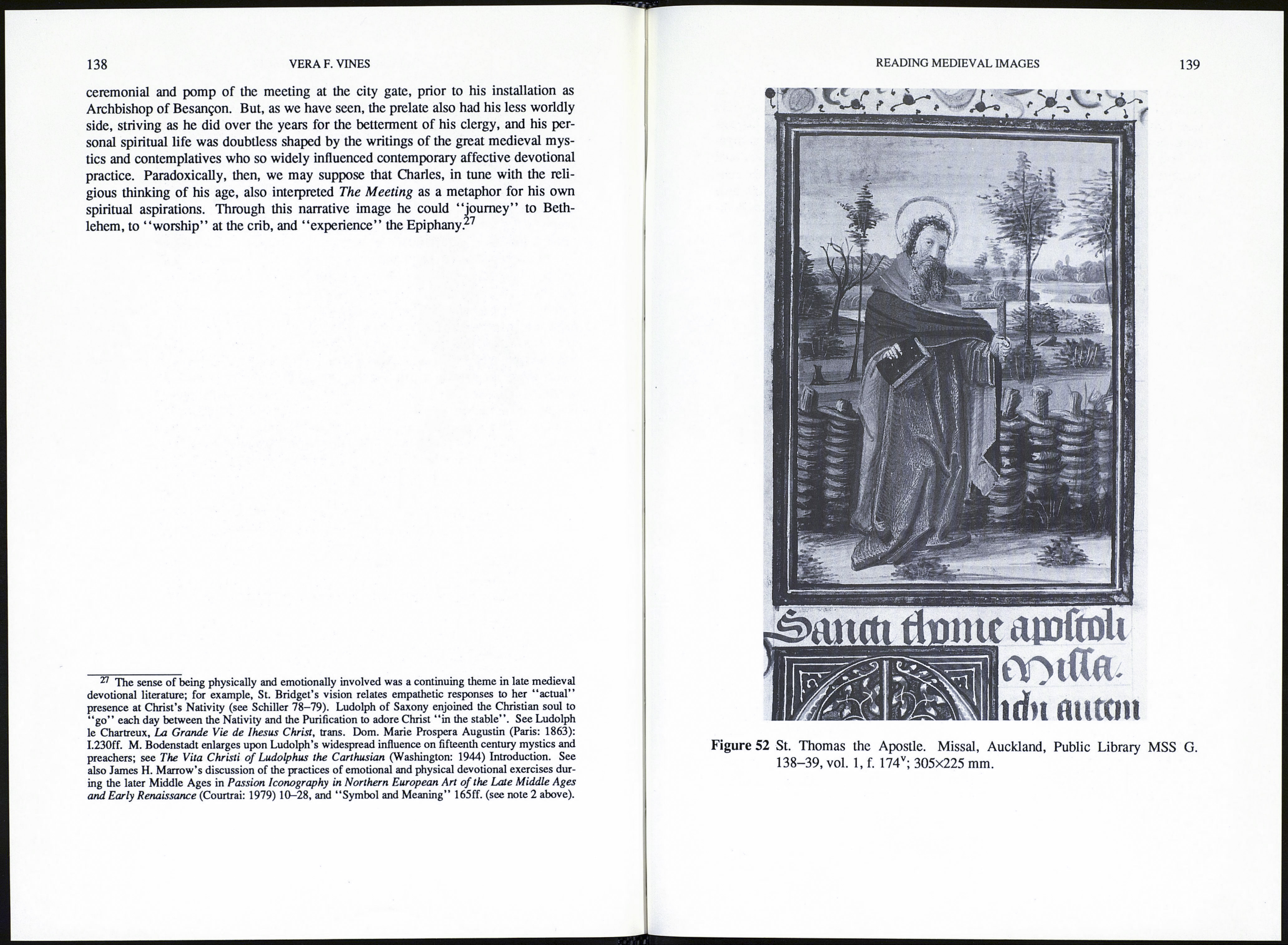 prophecy of Christ’s coming in order to flesh out the Magi’s own story. Thus the
biblical quotation, “For lo darkness shall cover the earth and a cloud the people”,
was used to describe the legendary circumstances of the Three Kings’ Meeting.
Isaiah’s camels and dromedaries and the men from Saba became the Three Kings’
men and beasts, said to be too numerous to lodge in the city.

These two miniatures—The Legend of St. Antidius and The Meeting of the
Magi—gain further significance if the manuscript commission is set into the broader
context of Charles de Neufchâtel’s achievements as Archbishop of Besançon.

When the Missal was commissioned, Charles was a young man, recently
installed as archbishop who, some months earlier in July 1463, had made a solemn
entry into his cathedral city. The Adventus Ceremony of welcome, originally
codified in monastic centres for medieval kings, had by the fifteenth century also
been accorded to other dignitaries, who were received at the city gates with tradi¬
tional ritual, and often with extravagant displays in the maimer of the joyeuses
entrées of the French kings and the Duke of Burgundy.19 Some prelates, remember¬
ing that one prototype for the Adventus Ceremony was Christ’s entry into Jerusalem,
had eschewed pomp and had even ridden on a donkey.20 But Charles was received
with pomp as the prince-archbishop who was to be temporal ruler of Besançon,
arriving with a huge escort of horsemen, said to number eight hundred—the élite of
the Franche-Comté nobility.21 At the city gate consecrated for solemn entries, he
would have been greeted by town and clerical dignitaries before entering his domain.

It should be said that such emphasis on temporal power, the hallmark of
authority, denotes only one aspect of Charles de Neufchâtel’s character. Set aside
for the Church at an early age, well educated, versed in Latin, philosophy and theol¬
ogy, he actively promoted liturgical reform. He saw the need for a single text of the
Sanctoral which retained local feasts, and also revised books of prayers for his
diocese. He compiled a catechism, and annotated Missals and Breviaries were
printed under his direction for distribution to his clergy—many of whom were
ignorant of the nature of their religious duties.22 As aids to devotion, he published

20 Kantorowicz 217, note 66. In a near-contemporary Burgundian description of the Congress of
Arras the chronicler notes that when news came of the impending arrival of the Cardinal of Cyprus the
vested bishop and abbot and the governor of the town with attendants went on horseback to the gate of
St. Michael consecrated for solemn entries. The abbot presented the cardinal with a cross to kiss,
which the cardinal did, while still on horseback. Then everybody processed to the cathedral. The Car¬
dinal Alberti, however, arrived unheralded—a matter for concern to the abbot. This account highlights
the different approaches of prelates to “solemn entries”. See A. de la Taverne, Journal de la Paix
d'Arras (1435), A. Boussat ed. (Arras: 1936) 6-8.

21 See Histoire de la Seigneurie 174-95. Charles, in fact, owed his benefice to the influence of his
family. His father, Jean П de Neufchâtel-Montaigu, who occupied important positions in the Burgun¬
dian court, had taken possession of the archbishopric for Charles in May 1463. Charles’ ceremonial
entry took place on 11 July 1463. He was not installed as archbishop until 23 May 1464. (See, howev¬
er, Histoire de Besançon, 515-516, which dates his personal temporal rule after 1466.)

various tracts, for example on the prayer of St. Bernard, on the joys of Paradise, and
on the torments of Hell. Other devotional texts printed under his direction included
several Specula and the poem Viri venerabiles sacerdotes Dei...P popular since the
thirteenth century, which exalted the dignity of the priesthood.

The formidable list of publications, which continued unabated during the
period of the Archbishop’s long exile,24 attests to a prelate of stature, concerned
with the administration of his diocese and with technical considerations of ceremo¬
nial, as well as with questions of liturgical reform. Also clear is the Archbishop’s
deeply felt pastoral concern for his clergy and his wish to improve their calibre
through education and spiritual exercises.

Such concerns are highlighted not only by the stress laid on teaching manuals
and devotional literature, but also by his use of an apocryphal tale when reminding
his canons of their obligation to recite the Divine Office. He enlivened his exhorta¬
tion by citing a terrible and horrible history of an archbishop of Magdeburg who was
neglectful of his duties. It is quite possible, therefore, that another apocryphal
tale—the legend of S. Antidius whose mission was to reform the Pope—would have
been understood by Charles de Neufchâtel as a metaphor for his own reforming zeal.
Under these circumstances the dynamic interpretation of St. Antidius astride a devil
would have spoken to the archbishop more powerfully and directly than, for exam¬
ple, the iconic figures of Ferreolus and Ferrucius.25 Could the Meeting of the Magi
also have been of personal moment to Charles in his role as prince-archbishop? To
answer this question we need to turn to the Introit for the Epiphany which begins
“Ecce advenit dominator Dominus: et regnum in manu ejus, et potestas, et
imperium”.

This is an adaptation of the prophecy of Malachai 3: 1. So, too, is the verse
“Ecce mitto angelum meum, qui praeparabit viam tuam ante faciem meam” used
since the tenth century for the Entrance verse in the consecration service for a prince,
and sung while he was conducted to the altar of the cathedral.26 There are indeed
strong links between the liturgy for the Feast of the Epiphany and the consecration
procession for a prince. Thus, it is quite possible that the equestrians in the Missal
miniature above the Introit would have triggered Charles’ memory to recall the

23 These appeared with the Besançon printed edition of the Statuta in 1488.

24 The Neufchâtel family, loyal to the Duke of Burgundy, lost favour after the Battle of Nancy
when Louis XI overran the region and devastated the countryside. In 1480 Charles pleaded with the
city to capitulate, which so angered the nobility still loyal to the Burgundian cause that de Neufchâtel
was declared a traitor and forced to flee. Louis XI gave him the bishopric of Bayeux where he lived
until his death in 1498. However he remained Archbishop of Besançon, leaving the administration of
the diocese to an auxiliary bishop. Charles’ publications stem from this period of exile.