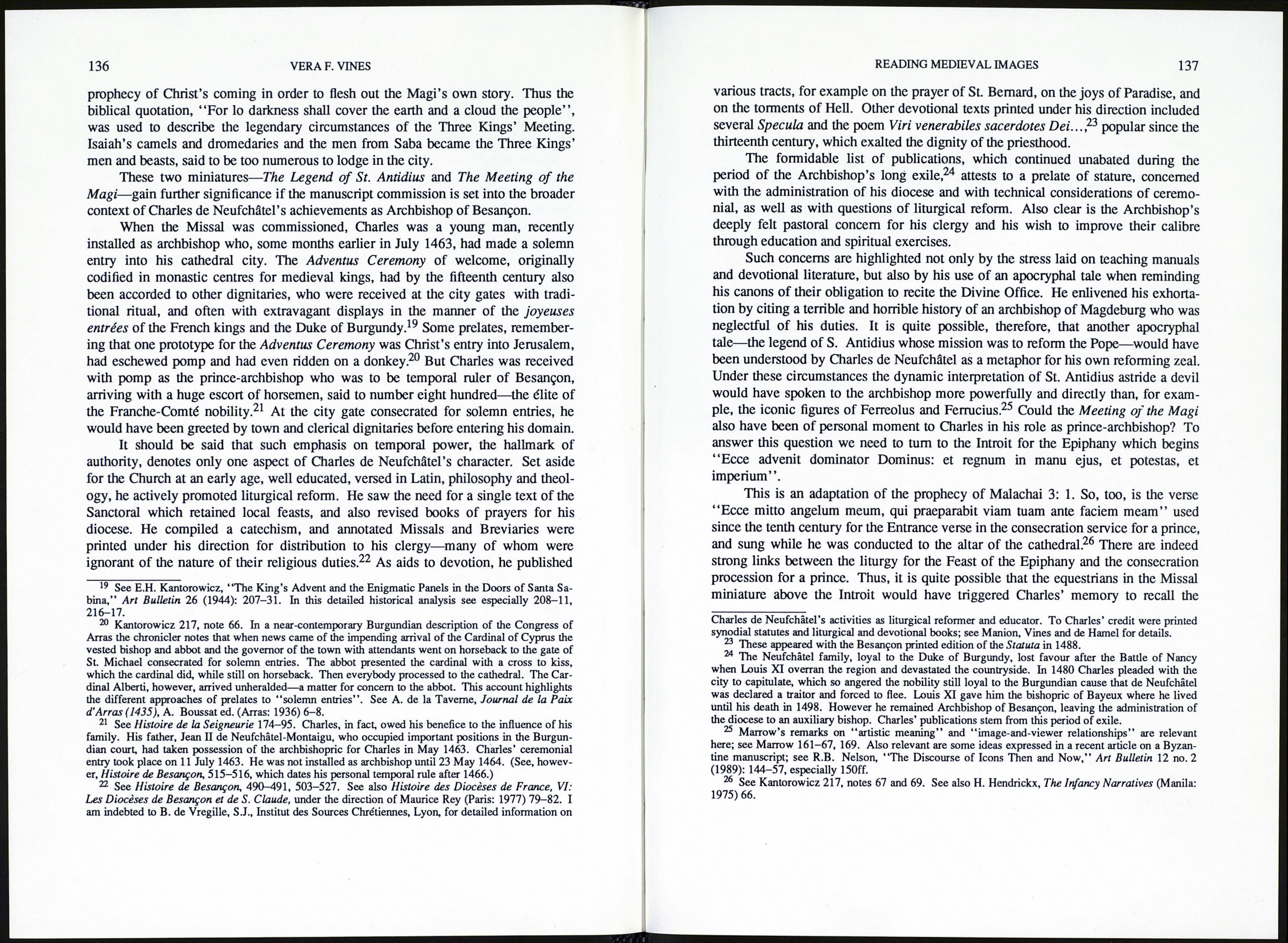 folk who stopped beside the mount of Olives in a little town called
Galilee, which town is frequently mentioned in the Gospels and not to be
confused with the province of Galilee which is three days journey from
Jerusalem. When these two kings came and abode in these places in the
cloud and in darkness, the fog began to lift but the star was still hid. So
when the two Kings saw that they were near the city of Jerusalem they
did not know each other but took their way towards the city with all their
folk. When they came to this highway, beside the mount of Calvary
where the three highways met, then came Jaspar king of Tarsus with all
his host, and all three met, kissing each other in great joy and reverence
although they had not known each other before, relating the reason for
their coming. They then rode forth together and at sunrise came to
Jerusalem with such numbers of men and beasts that they could not all be
lodged within the city but for the most part they lay without the city all
about as Isaiah had prophesied: Fortitudo gencium venerit tibi inundado
camelorum operiet te dromedarij Madian et Effa; omnes de Saba venient
aurum et thus deferentes et laudem domino annunciantes et cetera. That
is to say: “the strength of folk cometh to thee (that is to say to the city of
Jerusalem) great plenty of camels shall hail thee and dromedaries of
Madian and Epha shall come to thee all men shall come from Saba bring¬
ing gold and incense and showing praising to God” (Is. 60: 5-6). After¬
wards when the three kings had come to Jerusalem, Herod was in the city
and so they asked of the people about the child that was bom, as the
evangelist said in his Gospel...

If we return now to the miniature in the Besançon Missal, we see that the artist
was familiar with John of Hildesheim’s account, for his composition fits the literary
source closely. The sequence of events and the descriptive details of the legend are
clearly conveyed within the small dimensions of the miniature. The two landmarks
distinguished in the chronicle—the Mount of Calvary and the Mount of Olives—are
shown as two bulbous outcrops, on one of which is the ‘single highway’, a zig-zag
line. Melchior, identified by his negroid page as the king of Nubia, has arrived first
for his horse is almost stationary, and, inclining his head, he accepts a greeting
already extended by Balthazar on the left. The equestrian on the right is Jaspar, the
third king to arrive at the junction of the highways, still in the act of doffing his
crown—and the other two seem as yet unaware of his presence. The lines drawn
behind the kings signify lances of the assembled retinues—the ‘folk’, or ‘company’
of the English text—while the hound on the move represents the ‘numbers of
beasts’. The Magi do not look upwards because, although the fog has begun to lift,
the star is still hidden. Their journey to Jerusalem has yet to happen, for the artist
has selected the moment when the three independent cavalcades have just converged
before the Mount of Calvary—the instant of recognition, immediately before the
kings saw the star and kissed each other “in great joy and reverence...”. Thus the
artist has succeeded in conveying the temporal dimension of the narrative by

suggesting an ongoing sequence of events within the framework of a single compo¬
sition.

The question arises: Given the widespread popularity of the Adoration theme, why
was The Meeting substituted to illustrate the Epiphany in Charles de Neufchâtel’s
Missal? On the most general level, this could be construed as a register of the impor¬
tance placed by the people of Besançon on narrative legends about the Three Kings,
whose relics had been carried long before through nearby Burgundy en route to
Cologne. There was an abbey in the city dedicated to the Three Kings in which the
Neufchâtel seigneurial family had a chapel where Mass was said daily for the
Archbishop’s uncle Thibaud. Evidently there was family loyalty to the cult.17 In
addition, it is on record that during the Middle Ages and beyond, the Three Kings
were honoured in Besançon’s Cathedral of St. Stephen by a liturgical drama during
the Epiphany Mass.18 It is recounted that, after the Epistle, three clerics retired to the
sacristy to put on ‘royal’ capes and gold crowns. Then, led by chanting choristers
with candles and censors, they processed along the aisles of the nave, following a
luminous star which moved overhead, suspended from the vaults. Next, the ‘Three
Kings’ mounted the rood screen and each intoned one section of the Gospel. They
then pointed to the star, proclaiming “Ecce stellam quam vidimus”, and proceeding
across the choir they laid their gifts at the feet of the celebrant and presented him
with their crowns, which he placed upon the altar.

This interlude, intended to enrich the liturgy, thus presented the succeeding
episodes of the Magi’s journey and their homage, anticipating the Gospel (St.
Matthew 2: 1-12) which was to proclaim the Manifestation of Christ to the Gentiles.
Thematically, therefore, The Meeting of the Three Kings would have been a fitting
accompaniment to the liturgical drama being presented before the congregation. It
was thus a highly appropriate choice to illustrate the Epiphany Mass in a Missal
which was to be used in the cathedral.

This image is appropriate for another reason. The legend of the Meeting of the
Magi, signified by its illustration above the Introit, becomes a visual gloss or com¬
mentary, interacting with the biblical readings for the Epiphany. For, as the English
version makes plain, the chronicler had appropriated sentences from Isaiah’s

18 L’abbé Guibard, Cérémonies qui se pratiquaient au Moyen Age dans nos deux cathédrals de S.
Jean et de S. Etienne, Annales franc-comtoises, Revue religieuse, historique et littéraire, tome XII,
Nov. 1869, 330-342. There is a note to the effect that the material was gathered from a manuscript
written in 1646 by the Canon d’Orval, apostolic protonotary entitled Etat de l'Eglise de Besançon. The
Besançon drama was one of many associated with the popular theme of the Magi. The miniaturist
could have been familiar with descriptive details of The Meeting in association with Besançon Epi¬
phany pagentry. R. Hatfield, in “The Compagnia de Magi,” Journal of the Warburg and Courtauld
Institute 33 (1970): 107-61, discusses the pageantry and the devotional practices associated with the
Magi for which an important lay confraternity in Florence was responsible, and which attest to the
widespread popularity of the cult. See also the discussion in Sterling (note 11).