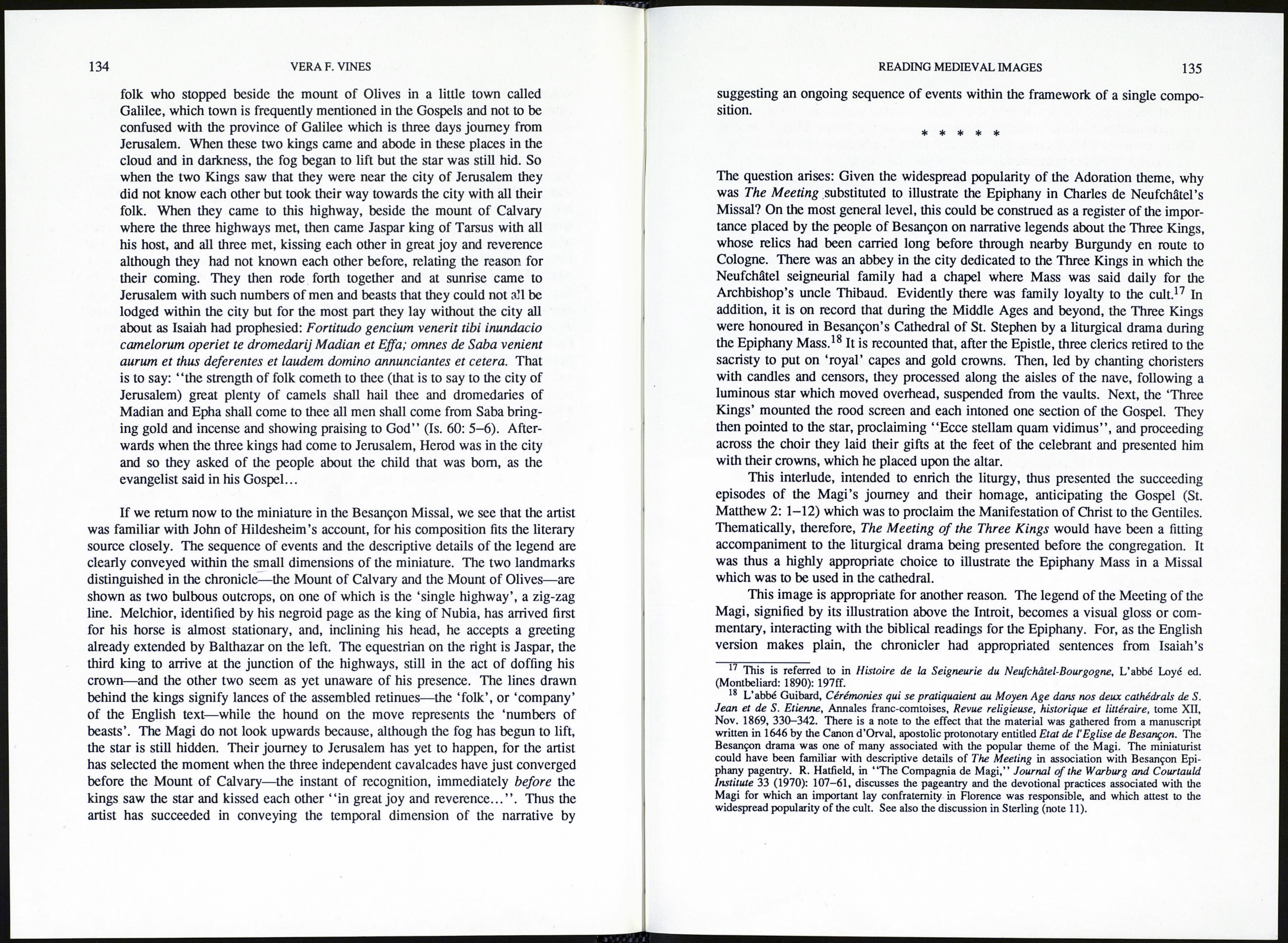 Thus for an unequivocal interpretation of the legend of The Meeting the caval¬
cades must appear to converge towards a destination point, and they should also
appear peaceable. These requirements are met in a subsidiary scene in a panel paint¬
ing of the The Adoration of the Magi by the Netherlandish artist Jacques Daret
painted in 1434 (Figures 59, 60).12 The painter has set the events in a Flemish
landscape. Behind the stable in the foreground a cavalry procession gallops towards
an inn where a larger group of horsemen is already assembled (Figure 60). In the far
distance two or three horsemen are also converging. The group at the inn does not
look warlike, although several soldiers are in armour. Some have their backs turned
to the oncoming procession; all are waiting upon the other travellers, and a meeting
between the first two cavalcades is imminent. Thus Daret’s version acknowledges
the temporal dimensions of the narrative and, in this one respect, it has an affinity
with the Missal illustration.

During the fifteenth century The Meeting was sometimes included in the bord¬
ers of manuscripts as a subsidiary motif to the main Adoration image. However, the
only well-known earlier illustration which treats The Meeting as a main theme
occurs in the Très Riches Heures of the Duc de Berry dated before 1416 (Fig¬
ure 58).13 Here three processions are set in a rocky mountainscape. The riders, all
splendidly robed and mounted on magnificent steeds, with pennants flying and
exotic animals in train, make their way towards a wayside shrine. It is, however, not
certain who will be the first to arrive, for the three retinues appear to converge simul¬
taneously towards the Gothic wayside shrine above which the guiding star is already
shining. In fact, the earlier moment of climax (when, according to the legend, the
fog lifts to reveal the star to the three assembled Magi) has been subsumed into the
temporal flow of the story. For the Meeting was inserted to face the Adoration of the
Magi in the Duke’s prayer-book, forming a diptych (fols. 51 v-52) to introduce the
Hour of Sext. The viewer, confronted by succeeding episodes of the Magi story, is
thus encouraged to recall and imagine the earlier happenings—the Magi’s separate
journeys and their fog-bound meeting before the star was revealed. It is precisely
this earlier moment of meeting which the Provençal artist has chosen to portray, in
simple terms without recourse to a wayside shrine. Thus the version in the
Besançon Missal has little in common compositionally or functionally with the

12 This is now in the Gemäldegalerie, Staatliche Museen Preussischer Kulturbesitz, Berlin. Daret’s
Adoration with its subsidiary motif has been discussed in my doctoral dissertation “The Arras Altar-
piece of J. Daret. A reassessment of the Artist on the Basis of his only Documented Work,” diss., U.
of Melbourne, 1981, 142-45. Daret’s imagery has no sense of warlike intent attributed to the process¬
ing Magi in the Bosch late fifteenth century “Prado Epiphany”. For this see L.B. Philip, “The Prado
Epiphany by Jerome Bosch,” Art Bulletin XXXV (1953): 267—93; see 284-85.

Limbourg Meeting of the Magi.u Moreover, unlike the Très Riches Heures, the
Missal contains no depiction of the Adoration of the Magi and on this account the
artist’s choice of The Meeting to illustrate the Epiphany assumes added interest.

To shed light on the Provençal artist’s compositional vocabulary we need to
turn to the literary source of this legend. In about 1364 a Westphalian Carmelite
prior, John of Hildesheim, wrote The Three Kings of Cologne. Claiming to have
compiled his chronicle from various Eastern, biblical, apocryphal and traditional
sources, the author interfused plausible narrative with strange topographical details
and fanciful miracles.15 His compilation was inspired by the widespread importance
of the cult of the Magi whose relics had been carried to Cologne in 1164. The popu¬
larity of the “Three Kings of Cologne” was such that the Chronicle was soon
widely disseminated. It was translated into German in 1389 and there were several
English versions by about 1400. The author narrates the Kings’ Meeting carefully,
locating it precisely in a “biblical” landscape, and commenting also on the adverse
weather conditions. Since his prolix descriptions (which in previous discussions
have been abbreviated) are important in the present context, they are reported in
lull.16

When the three kings, each with his own company had come within two
miles of Jerusalem, a great fog and dark cloud covered all the earth and
they lost the star, as Isaiah had prophesied: Surge illuminare Ierusalem
quia venit lumen tuum et gloria domina super te orta est: quia ecce tene¬
bre operient terram et caligo populos; that is to say: “Jerusalem, arise
and take light for thy light is come and the Joy of God is sprung upon
thee: for lo darkness shall cover the earth and a cloud the people” (Is. 60:

1-2). When these three kings were near Jerusalem, Melchior king of
Nubia and Araby, with his people, halted in the fog beside the mount of
Calvary. On this hill there was a highway, and to this highway were
three highways meeting together. After Melchior, next to him a little
under this cloud, came Balthazar king of Godolia and of Saba with his

14 The Limbourg diptych exemplifies the pictorial narrative convention which Ringbom (following
earlier scholars) calls “cyclic narrative” (see note 1). Some fifteenth century French depictions oí The
Meeting have been described as The Journey of the Magi: see Walters MS 223, f. 62 v; Time Sanctified
no. 46, p. 82, PI. 22; Great Book of Hours of Henry ѴПІ, Pierpont Morgan Library, Heinemann Collec¬
tion, H.8, f. 10 v (see Renaissance Painting in Manuscripts. Treasures from the British Library ed. T.
Kren (New York: 1984) 178, Figure 23 g.); The Journey (placed above The Adoration) occurs in the
Tilliot Hours (c. 1500), B.L. Yates Thompson MS 5, f. 48 v (see Kren 176, Figure 23 c.) Comparisons
are instructive. Compositionally the two themes can be distinguished in terms of processional arrange¬
ments, and the figurations of the kings and their gestures. The Meeting in the Besançon Missal does
not resemble any of the other versions in its compositional format.

16 The rendering given here closely paraphrases the Middle English text of The Three Kings, 52-58.
It should be noted that the account makes no mention of a wayside shrine at the foot of the Mount of
Calvary see the discussion above of the disparities between the Limbourg and Besançon depictions of
the episode.