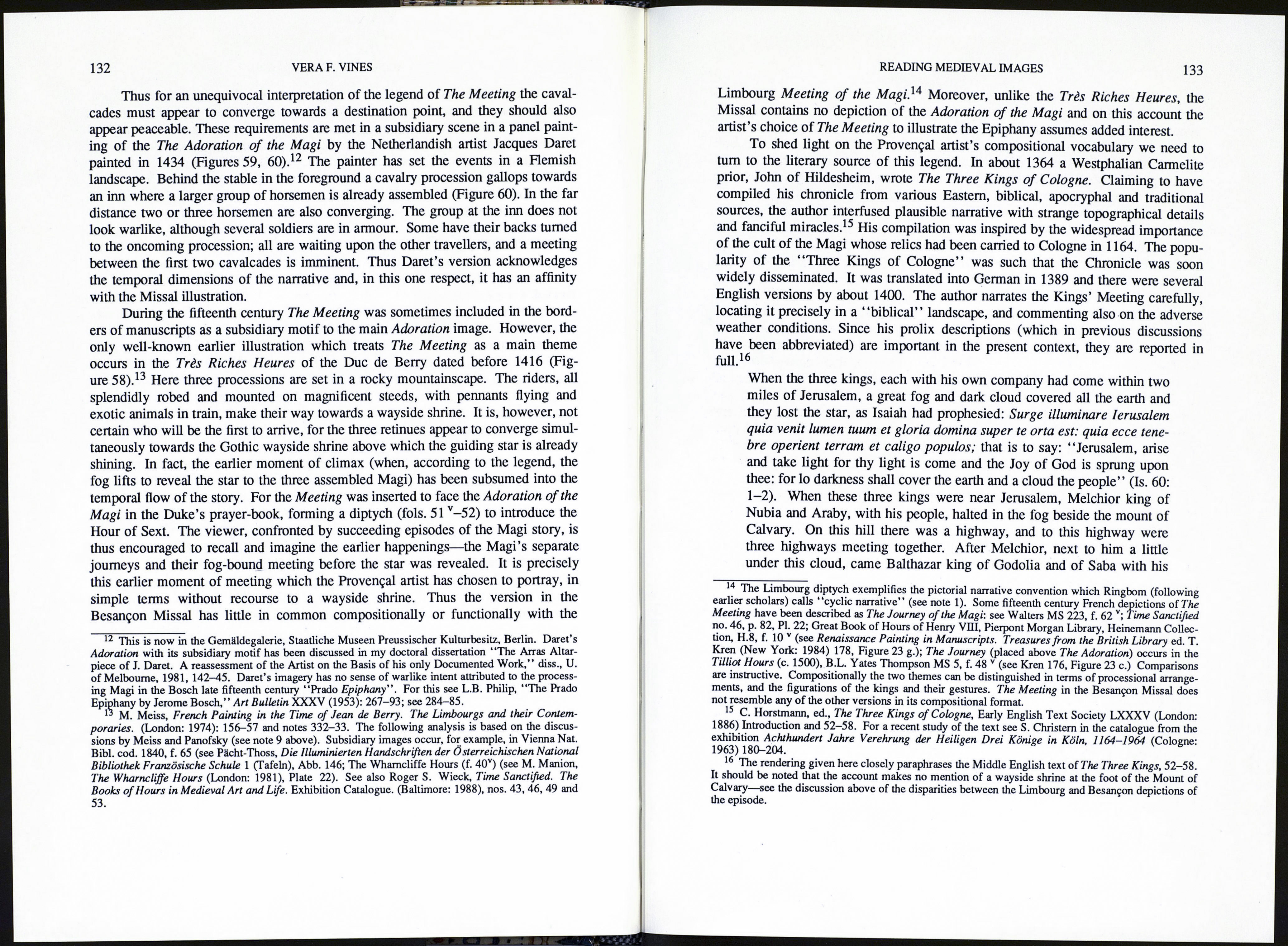 artists, in response it would seem, to the specific interests of the patron.6 They intro¬
duce the Mass for St. Antidius (volume I, f. 22) and the Feast of the Epiphany
(volume П, f. 157). Unlike the static iconic representation of many of the other
saints, including Ferreolus and Ferrucius (Figure 56) who were of major importance
in the Besançon calendar, St. Antidius is accorded a lively narrative reference.
Seated astride a devil, he is shown flying over a landscape, intent upon his journey
(Figure 57). The saint’s determined expression and the energy of the demon—with
its limbs extended, claws splayed out, and eyes turned towards the viewer—
communicate a sense of movement and single-minded purpose. Antidius was sup¬
posedly a bishop, martyred in about A.D. 411, and, although of doubtful historical
authenticity, his name appeared in the episcopal lists of Besançon compiled in the
eleventh century. It was claimed that he was murdered by Crocus, a king of the
Vandals, and buried some eleven miles from the city. In 1042 his relics were
discovered and transferred to St. Paul’s Church in Besançon, after which his cult
became popular. Miracles were attributed to the saint and fanciful legends proli¬
ferated, the most remarkable of which is the one commemorated in the Sanctoral
miniature.7 The holy man was credited with making a journey to Rome on the back
of a (supposedly benevolent) devil, because he was disturbed by rumours that the
Pope had committed fornication. Arriving in Rome as the Pope was about to say
Mass, Antidius called him aside and charged him with the sin. The Pope, tearful and
trembling, admitted his guilt, whereupon the saint replaced him as celebrant at the
altar. Later, after calling on the Pope to confess, Antidius gave him absolution and
departed. Such is the substance of the legend responsible for the Sanctoral miniature
whose air-borne comic-strip figures encourage the imagination of an informed
observer to anticipate the successful finale. The Northern painter’s talent for narra¬
tive is amply demonstrated in this unusual composition.8 The dynamic rendering of
St. Antidius stands in marked contrast to the stereotyped iconic figures of Ferreolus
and Ferrucius, who, as Besançon’s patron saints, enjoyed greater prominence
throughout the city. Thus within the Missal’s programme of illustration Antidius’
distinctive treatment carries an implied emphasis which merits consideration. This
is discussed below.

The second miniature, The Meeting of the Magi, (Plate 5), by the Provençal
painter, introduces the Mass for the Epiphany, and shows the artist departing from
the traditional image for that feast, namely The Adoration of the Magi.

8 The originality lies in the configuration of St. Antidius and the devil, not in the energetic rendering

of the demon per se, since such creatures abound in medieval art (for example, in scenes depicting Hell

or the conflict with St. Michael).

Three equestrians appear in the mid-ground. Their facial expressions and pos¬
ture are peaceable: two are associated with shadowy figures, and all three have
lances behind them. The central figure on horseback is accompanied by a negroid
youth, who stands to the front of the picture glancing up at his master. A hound,
sketched in, streaks off to the right. The background is cut short by trees and two
bulbous hillocks, one with a steep zig-zag path. The Provençal Master displays his
impressionistic technique, using thinly applied pallid washes of paint, short flecks
for grass, and shadows suggested by thin hastily drawn long lines; but his penchant
for creating naturalistic landscapes with long vistas—a hall-mark of his style
(already discussed in relation to the Stoning of Stephen and St. Thomas)—is not
apparent in this composition. Little attention has been paid to pictorial recession or
atmospheric perspective in plotting this particular background. Nevertheless he has
created a convincing composition in a coherent pictorial space within which the
three cavalcades are strategically placed for their moment of recognition which is the
climax of the legend. Indeed, the originality of the compositional setting suggests
that the artist was not aware of any traditional visual model.

This surmise finds support in the apparent rarity of the theme in earlier art.9 In
panel painting of the late fourteenth and early fifteenth century The Meeting of the
Magi does not seem to have been treated as a separate theme. Cavalcades with reti¬
nues of horsemen and exotic animals appear in the background of some representa¬
tions of The Adoration of the Magi, and could be construed as generalized references
to the Magi’s Meeting. But it is more likely that these subsidiary elements describe
a later event—the journey of the Magi to Jerusalem—a pictorial theme with a long
history.10 In a group of paintings of The Adoration stemming from fourteenth and
fifteenth century Italy, the horsemen in the background are actually converging, and
it has been assumed that the event portrayed is the Meeting of the Three Kings, a
legend recounted in a late medieval chronicle. However, in these Italian paintings
the retinues contain unbridled animals fighting one another, and agitated grooms
ready to intervene with drawn swords. Such warlike motifs, as Sterling has argued,
refer to a quite different medieval tradition which held that the Three Kings were
mortal enemies until they met under the guidance of the star, whereas in the original
written account of The Meeting it was explicitly stated that they had no prior
acquaintance.11

9 V. Leroquais, for example, has no examples of the theme in his survey of late fourteenth and
fifteenth century French Missals; see Les Sacramentales et les Missels Manuscrits des Bibliothèques
publiques de France (Paris: 1924) vols. П and ПІ. It is not included, for example, in the extensive Magi
Cycle on the Virgin Portal of Amiens Cathedral. For this see Marcia R. Rickard, “The Iconography of
the Virgin Portal of Amiens,” Gesta ХХП.2 (1983): 147-157, 148 ff. In fact, G. Schiller, Iconography
of Christian Art (London: 1973) vol. 1, 113ff., points out that the legend was unknown in the West un¬
til the second half of the fourteenth century. See also E. Panofsky, Early Netherlandish Painting
(Cambridge, Mass.: 1953) 393 n. 1.

11 C. Sterling, “Fighting Animals in the Adoration of the Magi,” Bulletin of Cleveland Museum of
Art LXI (1974): 350-359. Sterling discusses this assumption held, inter alia, by Panofsky (see note 9).
For the written account of The Meeting see note 15.