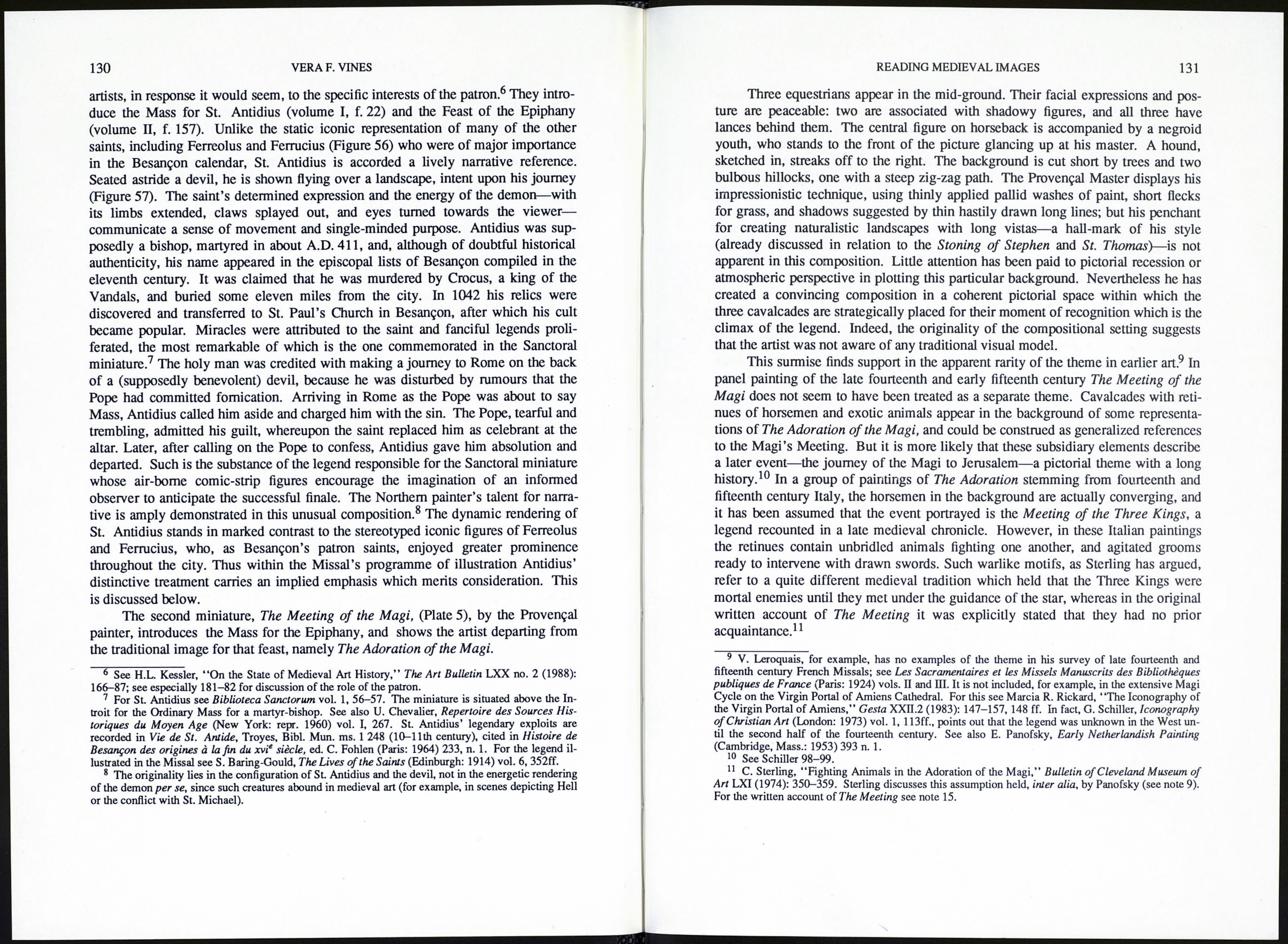 might suggest movement, figures describe incomplete gestures, or assume animated
expressions, or their directed gaze could signal the climactic moment of the story.

Such ploys are part of any artist’s repertoire, providing clusters of visual meta¬
phors to activate the informed viewer’s imagination, alerting it to make associations
which set the episode into a temporal context. But unless there is familiarity with
the story in question, a visual composition cannot signify unequivocal meaning even
though its forms are recognizable objects: of itself, a narrative picture cannot “tell”
a tale. But to the spectator already acquainted with a particular context, an image
can be recognized and “read”. Meanings will unfold, resonances will be set up in
the mind forging linkages and interactions with remembered words or appropriate
text, and, perhaps, with the observer’s own contextual associations.

This study focuses on two “narrative” images in a fifteenth century French Missal
which contain novel responses to the accompanying liturgical text. The themes are
rare enough to invite study, and in seeking to establish their significance in terms of
a specific historical context the discussion addresses some general questions about
the nature of narrative painting in late-medieval manuscripts. The two-volume Mis¬
sal in question was designed for use in Besançon and was probably made in about
1464 by a local workshop for Charles de Neufchâtel (1439-1498), Archbishop of
that city. The Calendar contains several local feasts, including the Translation of
Saints Ferreolus and Ferrucius (May 29), their Feast Day (June 16), and the Inven¬
tion of their Relics (September 5), and St. Antidius (June 17). It is an elaborate
book, with every feast in the Liturgical Year marked by a large illuminated initial
accompanied by a finely executed border, while the major Temporal feasts and all
the Masses in the Sanctoral are introduced by rectangular single-column miniatures.
Two full-page paintings prefix the Canon in both volumes.3 The miniatures are the
work of two artists coming from different stylistic traditions, one of whom was
probably trained in Provence, while the second displays affinities with the North-
Netherlandish centre of illumination in Utrecht.

Temporal and Sanctoral illustrations are mostly developed from familiar
models with the saints conventionally identified. Saint Thomas the Apostle, as dep¬
icted by the Provençal artist, is a traditional iconic figure who holds a book in one
hand and in the other a builder’s T-square—an attribute which stems from the apo¬
cryphal claim that he built a palace for an Indian king (Figure 52).4 Nevertheless, the
saint’s portrait gains conviction through its background, a tranquil scene stretching
into the distance, shafted with light and shadow—demonstrating the Provençal

3 See Margaret M. Manion, Vera F. Vines and Christopher de Hamel, Medieval and Renaissance
Manuscripts in New Zealand Collections (London, 1989) 55-58 for a detailed description of the codi-
cology of the volumes, a stylistic analysis of the contributing artists and a brief account of the historical
context. The Missal is in the Grey Collection (Med. MSS. G138—39).

miniaturist’s talent for painting naturalistic landscape. To mark the Feast of Fer¬
reolus and Ferrucius the Northern artist too has depicted the saints as iconic figures.
They stand side by side confronting the viewer from an interior architectural space,
each holding his decapitated head with a halo incongruously placed behind the neck
stump (Figure 56).5 Such images would have presented few problems to the artists
who had atelier models to call on as part of their stock-in-trade.

Despite their different figurative and compositional styles, the two miniaturists
shared an ability to interpret well-known narrative themes in lively ways. In the
Stoning of Stephen, for example, the Provençal artist provides realistic anecdotal
details which invite the audience to project in imagination beyond the moment
treated (Figure 53). The malefactors appear as if interrupted in their task. One
stands with rumpled leggings and head inclined, his gaze fixed on the back of the
saint, his right arm raised, stone clenched in hand. Rolling up his sleeve, a second
figure postures threateningly, his right arm and leg held taut, as he presses forward.
The captors’ murderous intent is in stark contrast to the saint’s compliant stillness as
he kneels awaiting martyrdom. The dramatic nature of this narrative is reinforced by
the contrasting elements of the landscape—rugged boulders with a dead tree project
the three figures into relief, while a line of greenery leading to still water reflects, it
seems, St. Stephen’s self-abnegation.

The Northern artist has a different approach to narrative depiction. His compo¬
sitions, although lacking the expressive subtleties of the Provençal artist’s interpreta¬
tion, nevertheless gain in energy and conviction through their spatial realism and the
warm palette which animate the stocky, almost comic-strip figures. Thus, for the
Transfiguration, an event of psychological intensity, the tableau is in a plausible
three dimensional setting which separates each figure by colour and form to convey
the apostles’ awe-stricken response to their moment of enlightenment (see Fig¬
ure 54). In the Conversion of St. Paul (Figure 55), a narrative with a more physical
climax, the Northern artist has again used form and colour with dramatic effect-
employing a large patch of scarlet for Paul’s rumpled jacket and another to frame the
vision of Christ above, with the heavenly and earthly zones being connected by a
stream of golden rays. By placing the horse and rider before a line of asymmetric
hillocks, he has emphasized the animal’s solid rump, a dead weight upon the ground.
Confronted by such an energy-charged image, the literate viewer cannot fail to be
reminded of the strange circumstances leading to Saul’s conversion.

In addition to such illustrations based on readily recognizable iconographical pat¬
terns, the Besançon Missal contains two images for which there appear to be no esta¬
blished models. These compositions demonstrate the powers of invention of both