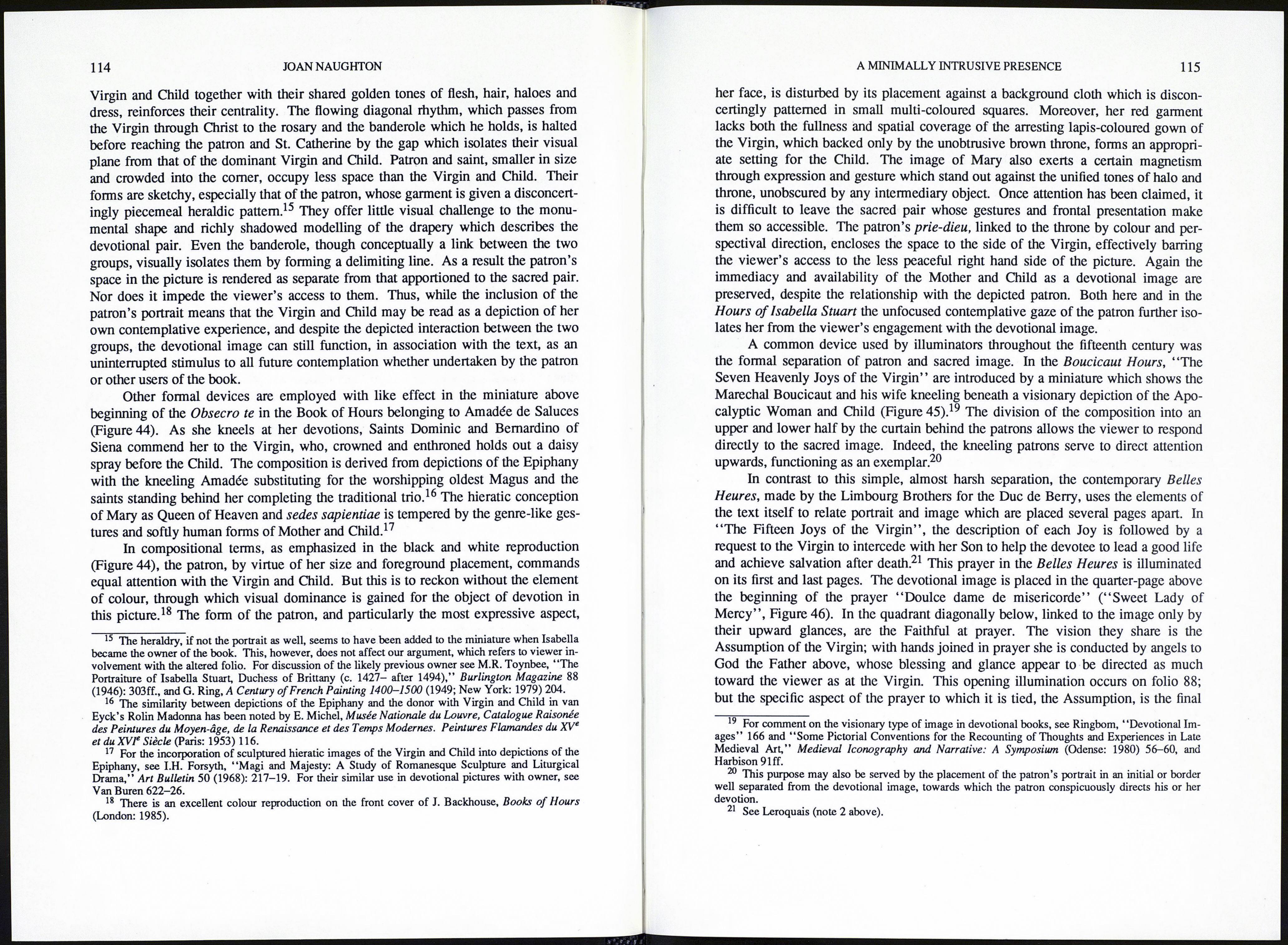 such as the Apocalyptic Woman “clothed with the sun, the moon under her feet”
(Figure 45),5 and the Christ Child often exhibits a playful interest in his surround¬
ings, as for example in his preoccupation with the instruments of attendant angel
musicians. Most emotive, perhaps, and allied to the continued reiteration of Christ’s
humanity, are the implied references to his impending Passion in the sad, foreknow¬
ing expression of the Virgin (Plate 3) and the naked body of the Child with stiffly-
hanging arm presaging scenes of the Deposition and Lamentation (Figure 49).6

Just as the illustration of the Hours of the Virgin serves to mark the canonical
divisions of this Office, so also the illumination which accompanies the Marian
prayers helps to clarify the hierarchical ordering of particular elements within the
book.7 Thus, the frequency with which the prayers attract large miniatures indicates
their importance to the patron, relative to other devotional texts. While these illus¬
trations clearly serve the double function of devotional aid and significant bookmark,
it is more difficult to ascertain the precise nature of their relationship to the prayers
they precede. Are the two necessarily linked, or can the image function indepen¬
dently of its textual accompaniment? Are these paintings essentially equivalent to
the very similar miniatures of Virgin and Child which occur in Books of Hours as
free-standing ‘frontispieces’, presumably intended as an aid to purely imaginative
contemplation rather than to a devotion which is largely verbal?8 The rubrics to
these prayers always refer to the efficacy of saying (or even just carrying) the prayer
itself. An appropriate emotional state is suggested less often, and then the rubric
merely states that the prayer should be said devote* or dévotemente10 or bono et
puro corde;n or it may comment that Thomas of Canterbury recited such prayers
cum magna devotione.12 It would seem, therefore, that for their recitation no specific

5 Revelations 12:1. More emotive still is the conflation of this imagery or the majestic theme of the
Virgin and Child in a Glory with that of the Eleousa-type Virgin and Child, where the Child’s arms are
affectionately placed around his mother’s neck while their faces gently touch, a popular amalgamation
appearing early in fifteenth century Paris (M. Meiss, French Painting in the Time of Jean de Berry. The
Limbourgs and their Contemporaries (London: 1974) Figures 388-391, pp. 138-140, 268).

6 For discussion of the equivalence of sleeping Child and Pietà in both text and image see E. Panof-
sky, “Reintegration of a Book of Hours executed in the workshop of the ‘Maître des Grandes Heures
de Rohan’,” Medieval Studies in the Memory of A. Kingsley Porter, ed. W.R.W. Koeler (Cambridge,
Mass.: 1939) 2: 490ff.

7 See M.B. Parkes’ discussion of the development of the ordering of the contents of books by care¬
ful compilation and by separating items by illustrative means: “The Influence of the Concepts of Ordi-
natio and Compilano on the Development of the Book,” Medieval Learning and Literature: Essays
Presented to Richard William Hunt, eds. J.J.G. Alexander and M.T. Gibson (Oxford: 1976) 115—41.

8 For medieval theory concerning devotional technique, and the compromise regarding the superior¬
ity of non-corporeal devotion by theologians such as Jean Gerson in early fifteenth century Paris at a
time when contemplative meditation was increasingly being taken up by the laity, see S. Ringbom
“Devotional Images and Imaginative Devotions: Notes on the Place of Art in Late Medieval Private
Piety,” Gazette des Beaux-Arts 6th ser. 73 (1969): 162-66.

devotional mood was recommended. This allowed scope for varied illumination and
for an even greater variety of associative thought on the part of the reader.

There is, however, a complication. In these compositions the patron is fre¬
quently portrayed at prayer. This involves a change in reference on the part of the
user of the book. Such imagery may be logically interpreted as reflecting a devo¬
tional state already attained as the result of the contemplative exercise. Indeed, the
patron is almost invariably depicted with unfocused gaze; the religious image thus
becomes an extension of his / her inner thoughts, while the book, the initial impetus
leading to this state, lies open but unheeded on the prie-dieu (Figure 45).13

Illustrations in which the patron appears, therefore, as well as acting as a devo¬
tional stimulus also direct the attention of the reader (whether the original patron or
later user) to the achievement of this activity. They are both a means to devotion
and the visualisation of its result.

There is yet another aspect to consider. The Virgin and Child in such scenes
are often shown interacting with the patron. The Christ Child may finger the
patron’s rosary or accept a banderole which invokes the Virgin’s aid “O mater Dei
memento mei” (Plate 3) in the same playful fashion as he treats the angel musi¬
cians.14 The sacred pair may also acknowledge the presence of the patron with a
glance or gesture (Figure 50). A complex set of relationships is thus set up by the
introduction of the patron into this type of affective illustration. Not only do the
Virgin and Child interact with the portrayed patron; but also to be taken into account
is the relationship between the user of the book and the portrait, as well as the nature
of the affective response invited by the religious image. How then did the artist deal
with the challenge of including the patron in these illustrations? Was it possible in
such circumstances to maintain the viewer-directed devotional nature of the Virgin
and Child? One means of answering this question is to examine closely how the pic¬
tures function visually. To this end I shall discuss a number of illustrations which I
consider to offer a variety of artistic solutions to the problem.

Confronted by the folio which introduces the Obsecro te in the Hours of Isa¬
bella Stuart (Plate 3) from the Rohan Master’s workshop, the viewer’s attention is
immediately claimed by the image of the Virgin and Child, situated near the top of
the miniature which itself occupies the upper part of the page. The conspicuous
lapis lazuli blue of the introductory rubric “Oracio beate Marie” overwhelms the
sepia text below, and forces a link with the large mass of matching rich colour in the
Virgin’s mantle, while the three dimensional pattem of the intervening floor mounts
inexorably and uni-directionally towards the sacred pair. Once arrived the viewer
stays easily with the devotional image: the three-quarter frontal rendering of both

12 The interpretation of devotional images which include owner or patron participation as a
reflection of his or her contemplative state of mind is argued in Ringbom, “Devotional Images”
164-66; A. H. van Buren, “The Canonical Office in Renaissance Painting, Part П: More About the Ro-
lin Madonna,” Art Bulletin 60 (1978): 624-26; and Harbison 96-105.