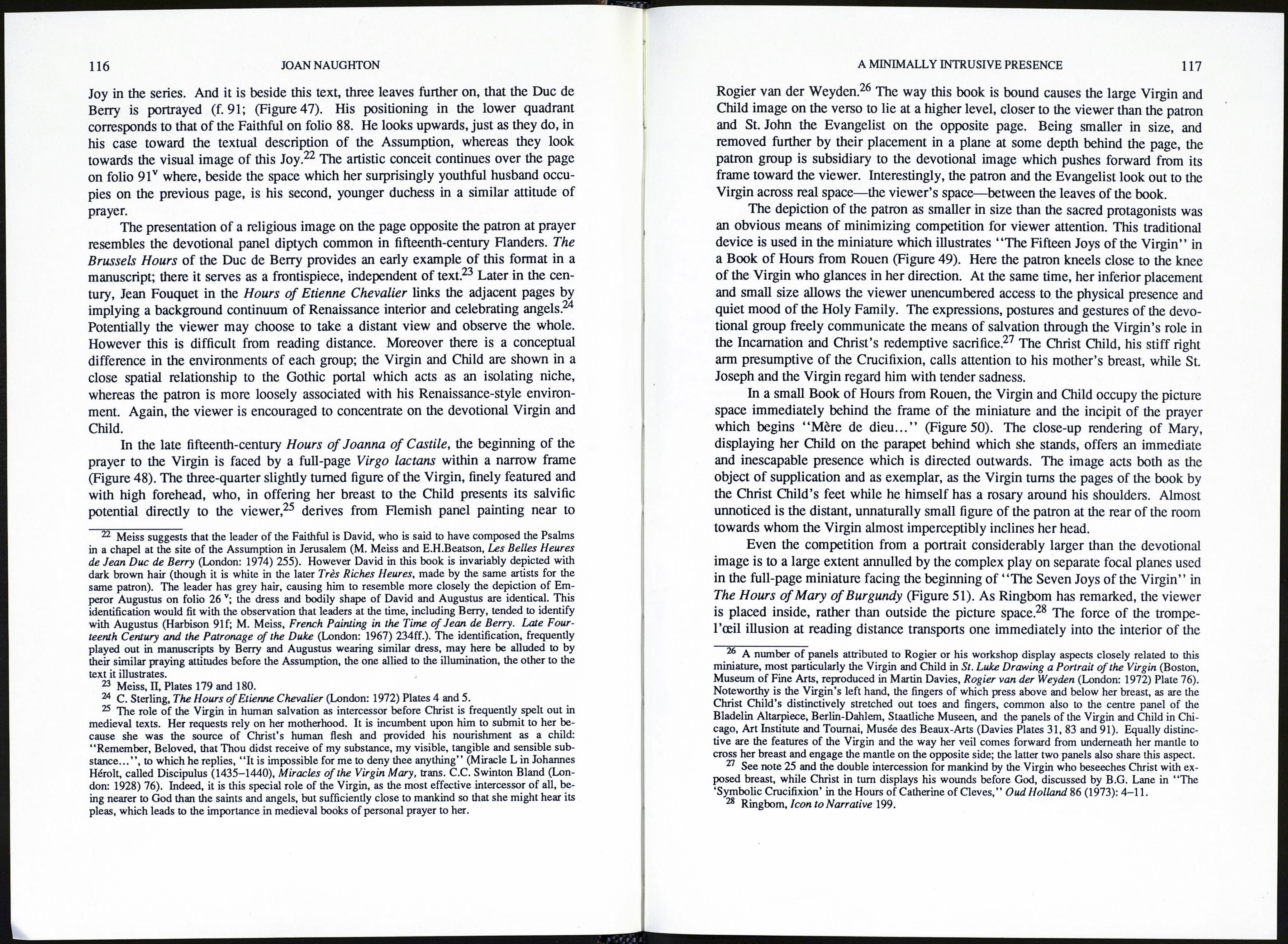 Virgin and Child together with their shared golden tones of flesh, hair, haloes and
dress, reinforces their centrality. The flowing diagonal rhythm, which passes from
the Virgin through Christ to the rosary and the banderole which he holds, is halted
before reaching the patron and St. Catherine by the gap which isolates their visual
plane from that of the dominant Virgin and Child. Patron and saint, smaller in size
and crowded into the comer, occupy less space than the Virgin and Child. Their
forms are sketchy, especially that of the patron, whose garment is given a disconcert¬
ingly piecemeal heraldic pattem.15 They offer little visual challenge to the monu¬
mental shape and richly shadowed modelling of the drapery which describes the
devotional pair. Even the banderole, though conceptually a link between the two
groups, visually isolates them by forming a delimiting line. As a result the patron’s
space in the picture is rendered as separate from that apportioned to the sacred pair.
Nor does it impede the viewer’s access to them. Thus, while the inclusion of the
patron’s portrait means that the Virgin and Child may be read as a depiction of her
own contemplative experience, and despite the depicted interaction between the two
groups, the devotional image can still function, in association with the text, as an
uninterrupted stimulus to all future contemplation whether undertaken by the patron
or other users of the book.

Other formal devices are employed with like effect in the miniature above
beginning of the Obsecro te in the Book of Hours belonging to Amadée de Saluces
(Figure 44). As she kneels at her devotions, Saints Dominic and Bernardino of
Siena commend her to the Virgin, who, crowned and enthroned holds out a daisy
spray before the Child. The composition is derived from depictions of the Epiphany
with the kneeling Amadée substituting for the worshipping oldest Magus and the
saints standing behind her completing the traditional trio.16 The hieratic conception
of Mary as Queen of Heaven and sedes sapientiae is tempered by the genre-like ges¬
tures and softly human forms of Mother and Child.17

In compositional terms, as emphasized in the black and white reproduction
(Figure 44), the patron, by virtue of her size and foreground placement, commands
equal attention with the Virgin and Child. But this is to reckon without the element
of colour, through which visual dominance is gained for the object of devotion in
this picture.18 The form of the patron, and particularly the most expressive aspect,

17 For the incorporation of sculptured hieratic images of the Virgin and Child into depictions of the
Epiphany, see I.H. Forsyth, “Magi and Majesty: A Study of Romanesque Sculpture and Liturgical
Drama,” Art Bulletin 50 (1968): 217-19. For their similar use in devotional pictures with owner, see
Van Buren 622-26.

18 There is an excellent colour reproduction on the front cover of J. Backhouse, Books of Hours
(London: 1985).

her face, is disturbed by its placement against a background cloth which is discon¬
certingly patterned in small multi-coloured squares. Moreover, her red garment
lacks both the fullness and spatial coverage of the arresting lapis-coloured gown of
the Virgin, which backed only by the unobtrusive brown throne, forms an appropri¬
ate setting for the Child. The image of Mary also exerts a certain magnetism
through expression and gesture which stand out against the unified tones of halo and
throne, unobscured by any intermediary object. Once attention has been claimed, it
is difficult to leave the sacred pair whose gestures and frontal presentation make
them so accessible. The patron’s prie-dieu, linked to the throne by colour and per-
spectival direction, encloses the space to the side of the Virgin, effectively barring
the viewer’s access to the less peaceful right hand side of the picture. Again the
immediacy and availability of the Mother and Child as a devotional image are
preserved, despite the relationship with the depicted patron. Both here and in the
Hours of Isabella Stuart the unfocused contemplative gaze of the patron further iso¬
lates her from the viewer’s engagement with the devotional image.

A common device used by illuminators throughout the fifteenth century was
the formal separation of patron and sacred image. In the Boucicaut Hours, “The
Seven Heavenly Joys of the Virgin’’ are introduced by a miniature which shows the
Maréchal Boucicaut and his wife kneeling beneath a visionary depiction of the Apo¬
calyptic Woman and Child (Figure 45).19 The division of the composition into an
upper and lower half by the curtain behind the patrons allows the viewer to respond
directly to the sacred image. Indeed, the kneeling patrons serve to direct attention
upwards, functioning as an exemplar.20

In contrast to this simple, almost harsh separation, the contemporary Belles
Heures, made by the Limbourg Brothers for the Duc de Berry, uses the elements of
the text itself to relate portrait and image which are placed several pages apart. In
“The Fifteen Joys of the Virgin”, the description of each Joy is followed by a
request to the Virgin to intercede with her Son to help the devotee to lead a good life
and achieve salvation after death.21 This prayer in the Belles Heures is illuminated
on its first and last pages. The devotional image is placed in the quarter-page above
the beginning of the prayer “Doulce dame de miséricorde” (“Sweet Lady of
Mercy”, Figure 46). In the quadrant diagonally below, linked to the image only by
their upward glances, are the Faithful at prayer. The vision they share is the
Assumption of the Virgin; with hands joined in prayer she is conducted by angels to
God the Father above, whose blessing and glance appear to be directed as much
toward the viewer as at the Virgin. This opening illumination occurs on folio 88;
but the specific aspect of the prayer to which it is tied, the Assumption, is the final

19 For comment on the visionary type of image in devotional books, see Ringbom, “Devotional Im¬
ages” 166 and “Some Pictorial Conventions for the Recounting of Thoughts and Experiences in Late
Medieval Art,” Medieval Iconography and Narrative: A Symposium (Odense: 1980) 56-60, and
Harbison 9 Iff.

20 This purpose may also be served by the placement of the patron’s portrait in an initial or border
well separated from the devotional image, towards which the patron conspicuously directs his or her
devotion.