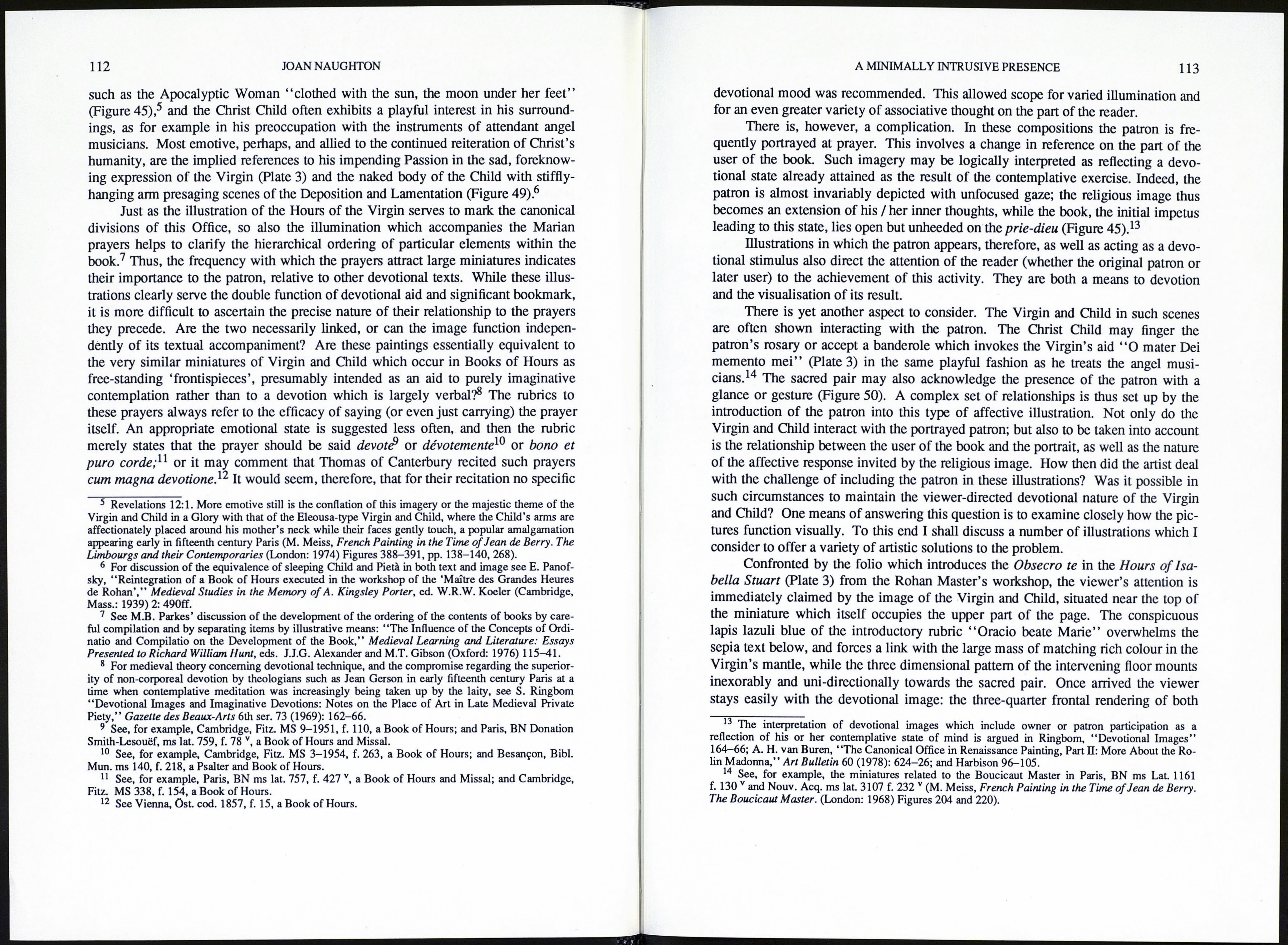 A Minimally-intrusive Presence:
Portraits in Illustrations
for Prayers to the Virgin

The extra-liturgical prayers in honour of Mary most frequently illustrated in
fifteenth-century French and Flemish Books of Hours are the Obsecro te, O intem¬
erata and “The Fifteen Joys of the Virgin”.1 Based often on the theme of the Virgin
and Child their illumination is relatively free of the narrative emphasis that charac¬
terizes the illustration of the Offices in these manuscripts.2 The accent is rather on
the pictures’ devotional function. Placed at the beginning of the prayer, they focus
attention on Mary, to whom the text is addressed, and serve to arouse in the devotee
an appropriate contemplative mood, either through their invitation to shared
intimacy with a tenderly accessible Mother and Child,3 or through their presentation
of a devotional exemplar.4 Affective elements inform even the most hieratic themes

1 The texts of the Obsecro te and one of the two distinctly different prayers beginning О intemerata
(to the Virgin and St. John the Evangelist) are translated in R.S. Wieck, Time Sanctified: The Book of
Hours in Medieval Art and Life (New York: 1988) 163ff. For the text of the other О intemerata (to the
Virgin only) and “The Fifteen Joys of the Virgin” see V. Leroquais, Les Livres d’Heures (Paris:
1927) 3: 336ff. and 31 Off. respectively.

2 From a consideration of more than a thousand Books of Hours, Wieck lists the broad variety of il¬
lumination which most frequently encompasses the theme of Virgin and Child: the Virgin may be dep¬
icted as Virgin of Humility, Virgo lactans or Virgin of Mercy; she may offer the Christ Child fruit; the
theme may be widened to include St. Joseph. Pietà and Lamentation scenes are also common (Wieck
94-96, 103). My own study is revealing an extraordinary breadth of thematic material and detail asso¬
ciated with this theme; the illustrations appear to be accorded a considerable freedom, sometimes mov¬
ing well away from the content of the prayer. For illustrations of the Hours of the Virgin and other
Offices in Books of Hours see J. Harthan, Books of Hours and their Owners (London: 1977); and R.S.
Wieck.