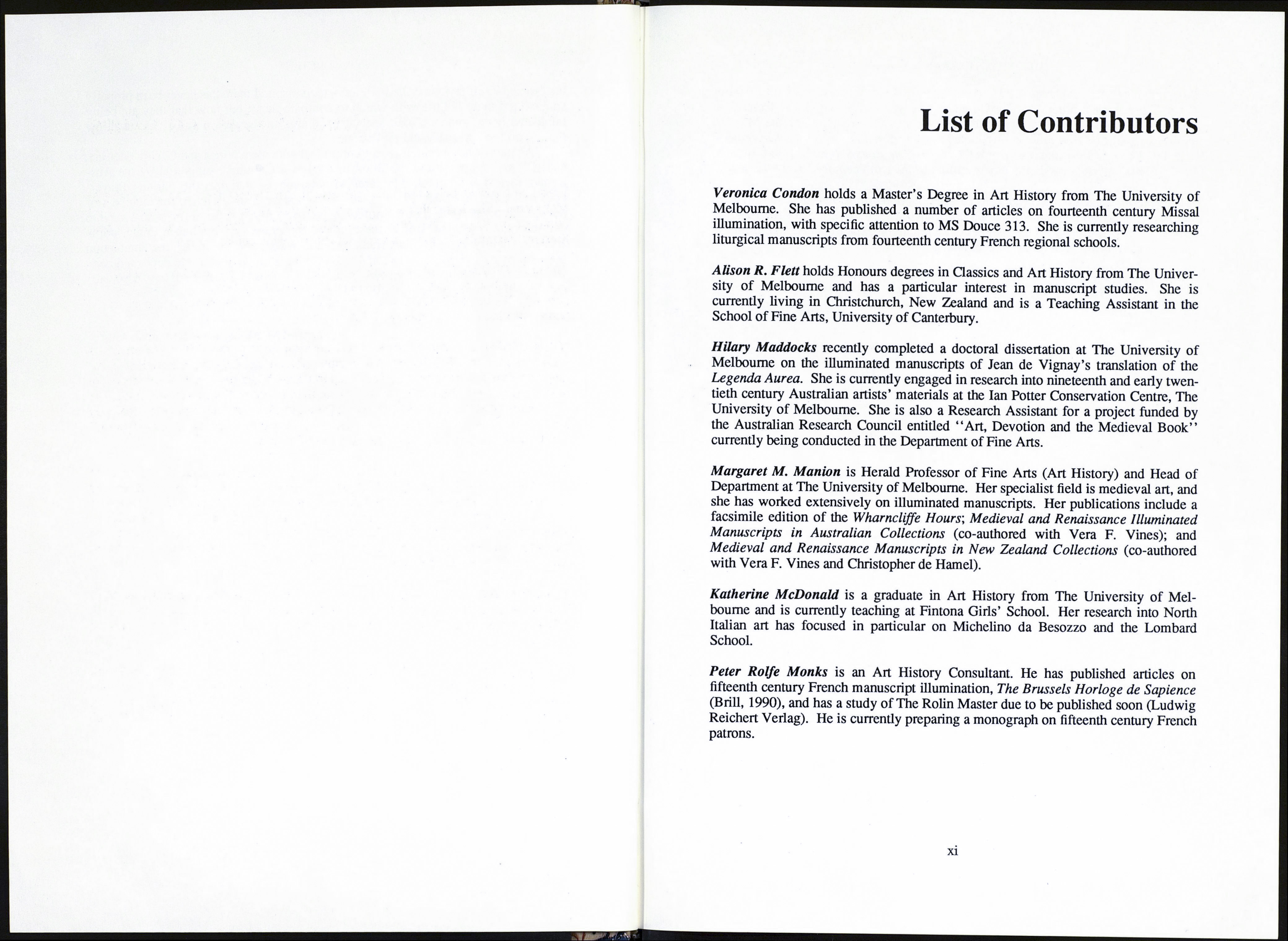 illustrations for the season of Pentecost in a fourteenth century French Missal for
FrancTscan Use, Oxford, Bodleian MS Douce 313. This is a continuation of a senes
of studies she has published on this exceptional manuscnpt. Vera Vines drew atten¬
tion to the fully illustrated two-volume Missal executed for Charles de Neufchâtel,
Archbishop of Besançon c.1464, in the catalogue of Medieval and Renaissance
Manuscripts in New Zealand Collections (1989). Here she examines two mimatures
from the Missal distinguished by their unusual iconography, and demonstrates how
me knowledge of iconographie conventions, popular legend and liturgical and
ecclesiastical ceremonial, as well as of the specific interests of the patron, can assist

Alison Hett also uses medieval material now located in New Zealand as the
basis for her theoretical investigation into the role of the written scroll within the
painted composition. She compares its various compositional ^d thematic func¬
tions in the depiction of a Crucifixion from a fifteenth century Book of Hours
(Dunedin Public Library, Reed Fragment 45) with examples in two other
CmcTfixion miniatures from a Flemish Book of Hours (Canberra, National Library

Two other contributors focus attention on the role of illumination in a devo¬
tional context. Joan Naughton demonstrates how artists manipulated the relationship
between text, devotional image and patron portraits in a group of illustrations for
prayers to the Virgin so that the user of these fifteenth century Books of Hours might
be affectively attuned to the spirit of the Marian devotion. Both miniature and
border decoration in the fifteenth century Italian prayer-book of Michelino da
Besozzo are studied by Katherine McDonald with special reference to the way in
which they reflect and amplify the intensely emotional and personal tone of the
prayers—prayers that are based on the libelli precum tradition and were composed

for 0>Brien indicates the continuing influence of written and liturgical

traditions on monumental Renaissance art in her challenging reading of Raphael s
Disputa. She argues that textual and visual liturgical references, together with topoi
developed for library decoration, are used in the fresco to allude to the function of

the room and to Julius II’s own personal ambitions. .

The essay by Bernard J. Muir stands out from the others presented here in that
it deals with a manuscript from a much earlier period. Commonly known as the
Exeter Book, this contains the earliest surviving English anthology of Christian ver¬
nacular poetry, comprising approximately 130 poems representing a number о
genres otherwise unknown from early England. Many of the poetic texts are
inspired by the liturgy or can be related to the English “Monastic Revival of the
tenth century. Muir’s work on a new edition of this important manuscnpt is being
supported by a substantial grant from the Australian Research Council, and a
comprehensive bibliography of the manuscript and its texts is scheduled to be pub¬
lished in 1991. There are a number of drypoint designs and figures in the margins ot
the manuscript (some of which are reproduced here) that may be of interest to art

historians. Their style and the tradition which inspired them has never been properly
studied and there is little with which to compare them; but now that they are being
published here, someone with specialist training in the area may be able to throw
light upon their ancestry and affiliations.

As part of her research for a joint project with Vera Vines and Cecilia O’Brien,
called Art, Worship and the Book in Medieval Culture”, supported by the Aus¬
tralian Research Council, Margaret M. Manion is studying the various Prayer-
books—Books of Hours, Psalters etc.—which were commissioned for members of
the French royal family in the fourteenth and early fifteenth centuries, with a view to
defining the ways in which these often sumptuously illuminated manuscripts
enshrine family customs and traditions and reveal the nature of the interaction
between patron, clerical adviser and artist-illuminator. In the article published here,
she concentrates on certain aspects of the prayer-books of Jean de Berry, especially
the illumination of prayers for use at Mass.