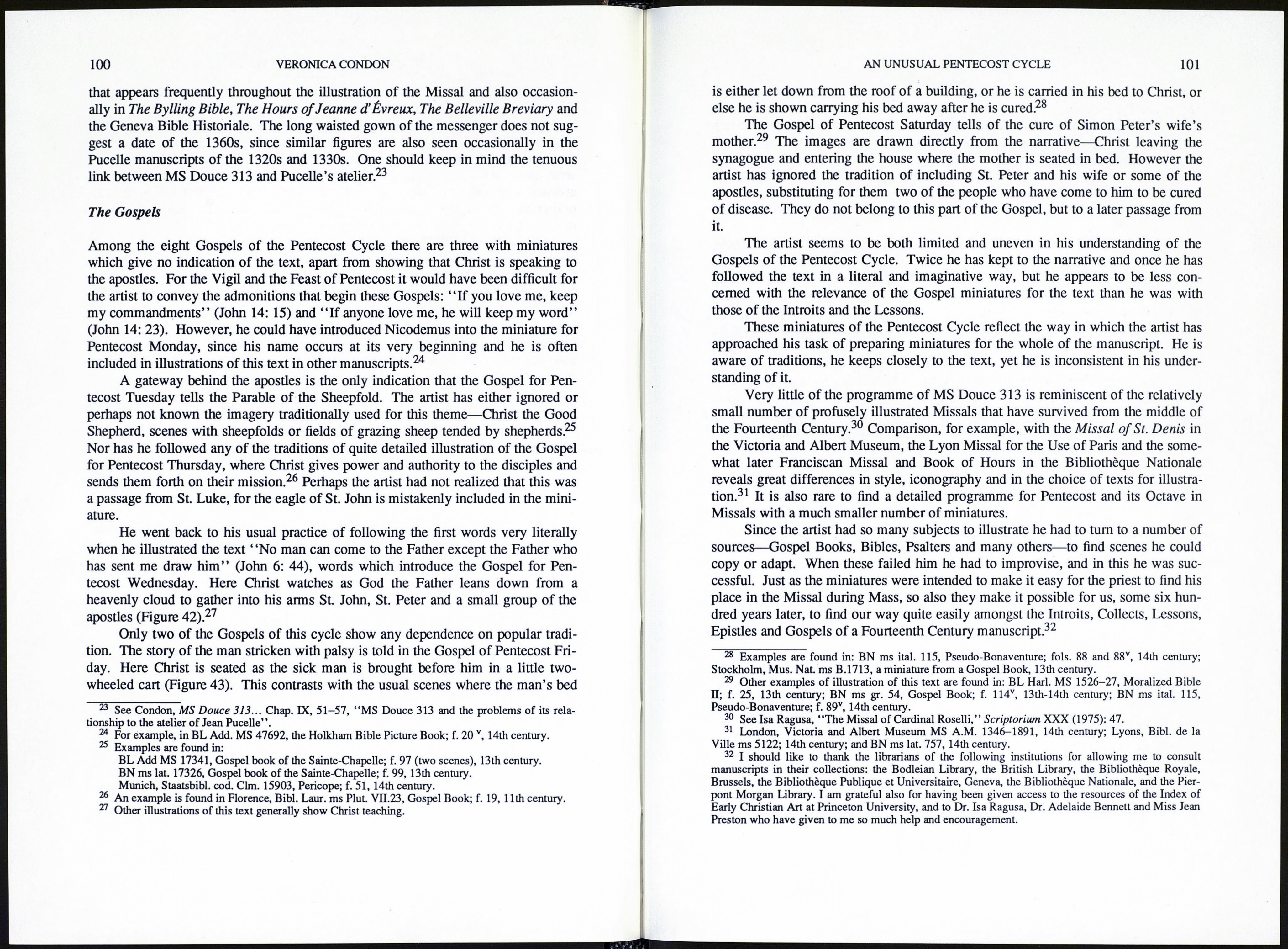 first of these Lessons, that for the Vigil of Pentecost, depicts St. Paul speaking
boldly in the synagogue of Ephesus (Figure 38). The traditional illustration for this
text is Apollo at Corinth, who is referred to at the beginning of the Lesson, while St.
Paul in the synagogue is not mentioned until the end. It is unusual for the artist to
take an image from the last part of the text. For the Lesson for Pentecost he has
drawn the City of Jerusalem, the seated apostles, a few of the devout of every nation
and the coming of the mighty wind— all of which are mentioned in the text (Fig¬
ure 39). The wind is blown from a trumpet, which is characteristic of apocalyptic
illustrations (from time to time throughout the Missal the artist reveals his depen¬
dence on such manuscripts).18

The Lesson for Pentecost Monday is again a subject which was not often illus¬
trated; once more the images are taken directly from the text: St. Peter opening his
mouth, God commanding him to speak to the people, God as the judge of the living
and the dead, the grace of the Holy Spirit poured down upon the gentiles, and St.
Paul baptizing in the name of the Lord. The illustration for Pentecost Tuesday is
almost as detailed, for it includes the apostles, the messenger who tells them that
Samaria has received the word of the Lord, and St. Paul and St. John in Samaria
laying their hands on the people so that they may receive the Holy Spirit. By con¬
trast, the illustration for Pentecost Wednesday is a simple didactic scene. Here too
the artist has made a mistake: St. Peter is described as standing with the eleven; but
the artist has included too many haloes in the group of apostles. He follows tradition
in his inclusion of the People of Judea.

The miniature for Pentecost Thursday shows St. Philip healing the man who
had an unclean spirit. This particular text is seldom illustrated, though there are
numerous examples of miniatures which depict similar cures. The artist frequently
uses the image of a devil to indicate unclean spirits or evil deeds and temptations—
for example, on Thursday of Holy Week a devil clings to Judas’ back as the High
Priests give him the thirty pieces of silver.19

In the miniature for Pentecost Friday the artist depicts Joel telling the Children
of Sion to “be joyful and to rejoice in the Lord” (Joel 2: 23-24, 26-27). This
admonition was rather too hard for the artist to convey, though it is surprising that he
did not read more of the text and find images that were easy to draw, such as rain,
wheat, or the presses overflowing with wine and oil. However, as with Esdras, com¬
parable miniatures of Joel are mostly in Bibles and moralized Bibles and indicate the
beginning of a book of the Old Testament rather than an episode from it.

Pentecost Saturday is an Ember Saturday, and a larger number of Lessons than
usual are read at Mass. In the first of these the artist has been careless once more.
The miniature illustrates the text which alludes to the young men who see visions

18 The similarities are in scenes of hillsides strewn with bones or with animals grazing on them; in
details such as trumpets, flames, clouds, islands, and streams of water. See, for example:

and the old men who dream dreams, but here all the men on the hillside are young
(Figure 40). The second Lesson begins: “The Lord spoke to Moses saying: Speak
to the Children of Sion” (Levit. 28: 9-11, 15-17, 21). There are many comparable
miniatures where God speaks to Moses, but none (to my knowledge) where God
leans out of a temple window to do so. The scene does not appear to be dependent
on another manuscript; rather it is an adaptation of another miniature in MS Douce
313, where St. John the Baptist leans out of his prison window to speak to some of
his disciples.20 The third Lesson is a very simple scene with Moses and the Children
of Israel standing by sheaves, the first fruits of their harvest. The miniature for the
fourth Lesson is another didactic scene, which illustrates the text ‘ ‘The Lord said to
Moses: Speak to the Children of Israel” (Levit. 26: 3-12). The artist has placed the
Children of Israel behind Moses, but he has not included any of the other textual
images such as the harvest or the vintage.

The last of these Lessons tells the story of Azarias and his companions in the
fiery furnace. It is a subject which was often illustrated, sometimes simply and
sometimes in detail. Two versions appear in MS Douce 313, a simpler one for
Saturday of Ember Week in Advent, while the miniature for Pentecost Saturday
takes a number of precise images from the text: “The angel of the Lord went down
with Azarias and his companions into the furnace... he drew the flame of the fire our
of the furnace and made the midst of the furnace like a blowing wind...and the
flames mounted up above the furnace...and it broke forth and burned such of the
Chaldeans as it found near the furnace, the servants of the king” (Dan. 3: 46-50)21

With few exceptions, the artist illustrates St. Paul’s Epistles with the figure of St.
Paul, his messenger, and the people to whom he addresses his letter (Figure 41).
This is the traditional way of illustrating the Epistles.22 What is so interesting about
these particular miniatures is the way in which the artist has managed to vary the
clothes, gestures, stance, background and general arrangement of the scenes so that
no two miniatures are alike. In Figure 41 St. Paul is that strange, distorted figure

21 Some other simple versions are:

Some more detailed versions are found in the following: