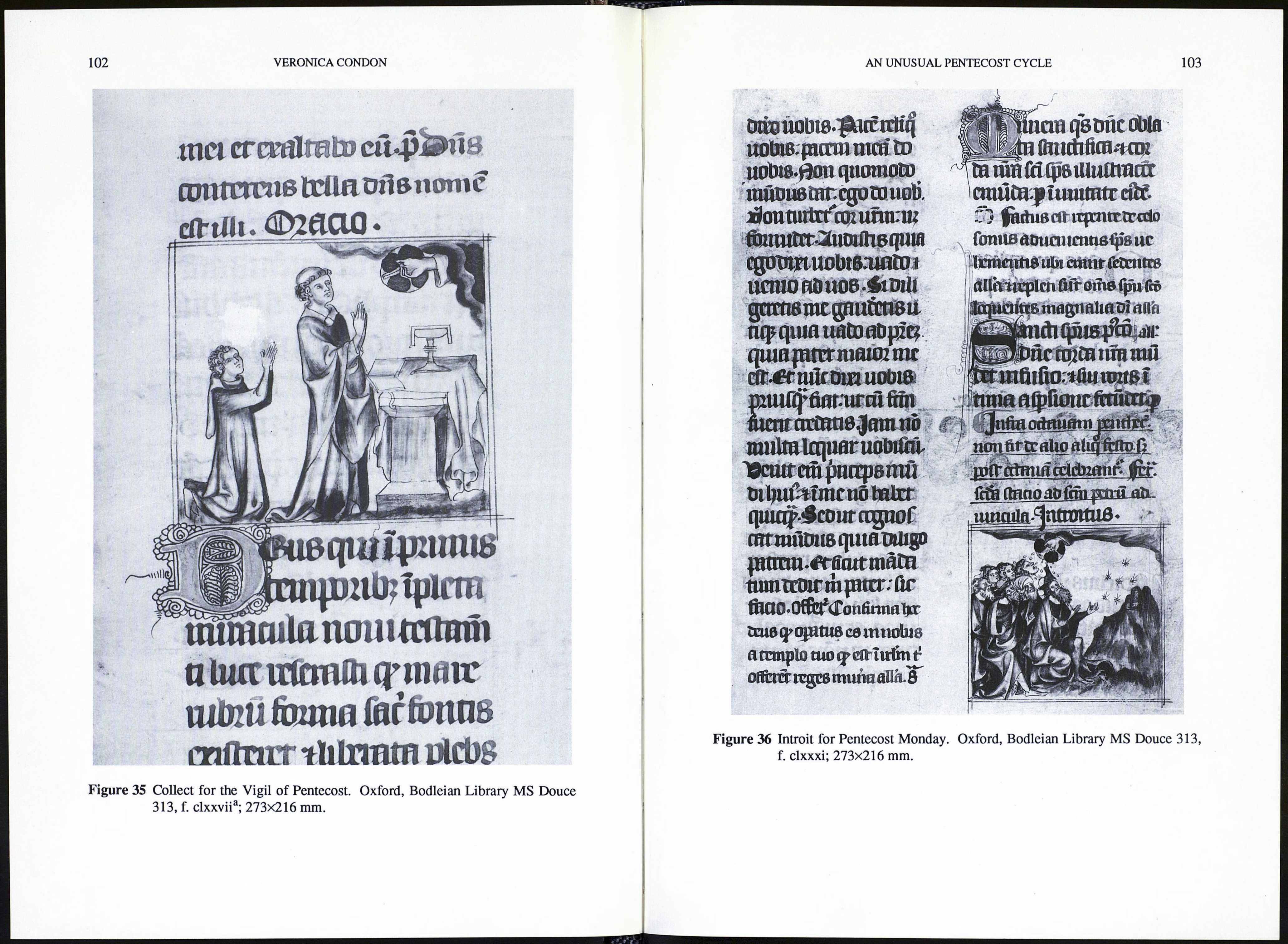 that appears frequently throughout the illustration of the Missal and also occasion¬
ally in The Bylling Bible, The Hours of Jeanne d’Êvreux, The Belleville Breviary and
the Geneva Bible Historíale. The long waisted gown of the messenger does not sug¬
gest a date of the 1360s, since similar figures are also seen occasionally in the
Pucelle manuscripts of the 1320s and 1330s. One should keep in mind the tenuous
link between MS Douce 313 and Pucelle’s atelier.23

Among the eight Gospels of the Pentecost Cycle there are three with miniatures
which give no indication of the text, apart from showing that Christ is speaking to
the apostles. For the Vigil and the Feast of Pentecost it would have been difficult for
the artist to convey the admonitions that begin these Gospels: “If you love me, keep
my commandments” (John 14: 15) and “If anyone love me, he will keep my word”
(John 14: 23). However, he could have introduced Nicodemus into the miniature for
Pentecost Monday, since his name occurs at its very beginning and he is often
included in illustrations of this text in other manuscripts.24

A gateway behind the apostles is the only indication that the Gospel for Pen¬
tecost Tuesday tells the Parable of the Sheepfold. The artist has either ignored or
perhaps not known the imagery traditionally used for this theme—Christ the Good
Shepherd, scenes with sheepfolds or fields of grazing sheep tended by shepherds.25
Nor has he followed any of the traditions of quite detailed illustration of the Gospel
for Pentecost Thursday, where Christ gives power and authority to the disciples and
sends them forth on their mission.26 Perhaps the artist had not realized that this was
a passage from St. Luke, for the eagle of St. John is mistakenly included in the mini¬
ature.

He went back to his usual practice of following the first words very literally
when he illustrated the text “No man can come to the Father except the Father who
has sent me draw him” (John 6: 44), words which introduce the Gospel for Pen¬
tecost Wednesday. Here Christ watches as God the Father leans down from a
heavenly cloud to gather into his arms St. John, St. Peter and a small group of the
apostles (Figure 42).27

Only two of the Gospels of this cycle show any dependence on popular tradi¬
tion. The story of the man stricken with palsy is told in the Gospel of Pentecost Fri¬
day. Here Christ is seated as the sick man is brought before him in a little two¬
wheeled cart (Figure 43). This contrasts with the usual scenes where the man’s bed

25 Examples are found in:

27 Other illustrations of this text generally show Christ teaching.

is either let down from the roof of a building, or he is carried in his bed to Christ, or
else he is shown carrying his bed away after he is cured.28

The Gospel of Pentecost Saturday tells of the cure of Simon Peter’s wife’s
mother.29 The images are drawn directly from the narrative—Christ leaving the
synagogue and entering the house where the mother is seated in bed. However the
artist has ignored the tradition of including St. Peter and his wife or some of the
apostles, substituting for them two of the people who have come to him to be cured
of disease. They do not belong to this part of the Gospel, but to a later passage from
it.

The artist seems to be both limited and uneven in his understanding of the
Gospels of the Pentecost Cycle. Twice he has kept to the narrative and once he has
followed the text in a literal and imaginative way, but he appears to be less con¬
cerned with the relevance of the Gospel miniatures for the text than he was with
those of the Introits and the Lessons.

These miniatures of the Pentecost Cycle reflect the way in which the artist has
approached his task of preparing miniatures for the whole of the manuscript. He is
aware of traditions, he keeps closely to the text, yet he is inconsistent in his under¬
standing of it.

Very little of the programme of MS Douce 313 is reminiscent of the relatively
small number of profusely illustrated Missals that have survived from the middle of
the Fourteenth Century.30 Comparison, for example, with the Missal of St. Denis in
the Victoria and Albert Museum, the Lyon Missal for the Use of Paris and the some¬
what later Franciscan Missal and Book of Hours in the Bibliothèque Nationale
reveals great differences in style, iconography and in the choice of texts for illustra¬
tion.31 It is also rare to find a detailed programme for Pentecost and its Octave in
Missals with a much smaller number of miniatures.

Since the artist had so many subjects to illustrate he had to turn to a number of
sources—Gospel Books, Bibles, Psalters and many others—to find scenes he could
copy or adapt. When these failed him he had to improvise, and in this he was suc¬
cessful. Just as the miniatures were intended to make it easy for the priest to find his
place in the Missal during Mass, so also they make it possible for us, some six hun¬
dred years later, to find our way quite easily amongst the Introits, Collects, Lessons,
Epistles and Gospels of a Fourteenth Century manuscript.32

32 I should like to thank the librarians of the following institutions for allowing me to consult
manuscripts in their collections: the Bodleian Library, the British Library, the Bibliothèque Royale,
Brussels, the Bibliothèque Publique et Universitaire, Geneva, the Bibliothèque Nationale, and the Pier-
pont Morgan Library. I am grateful also for having been given access to the resources of the Index of
Early Christian Art at Princeton University, and to Dr. Isa Ragusa, Dr. Adelaide Bennett and Miss Jean
Preston who have given to me so much help and encouragement.