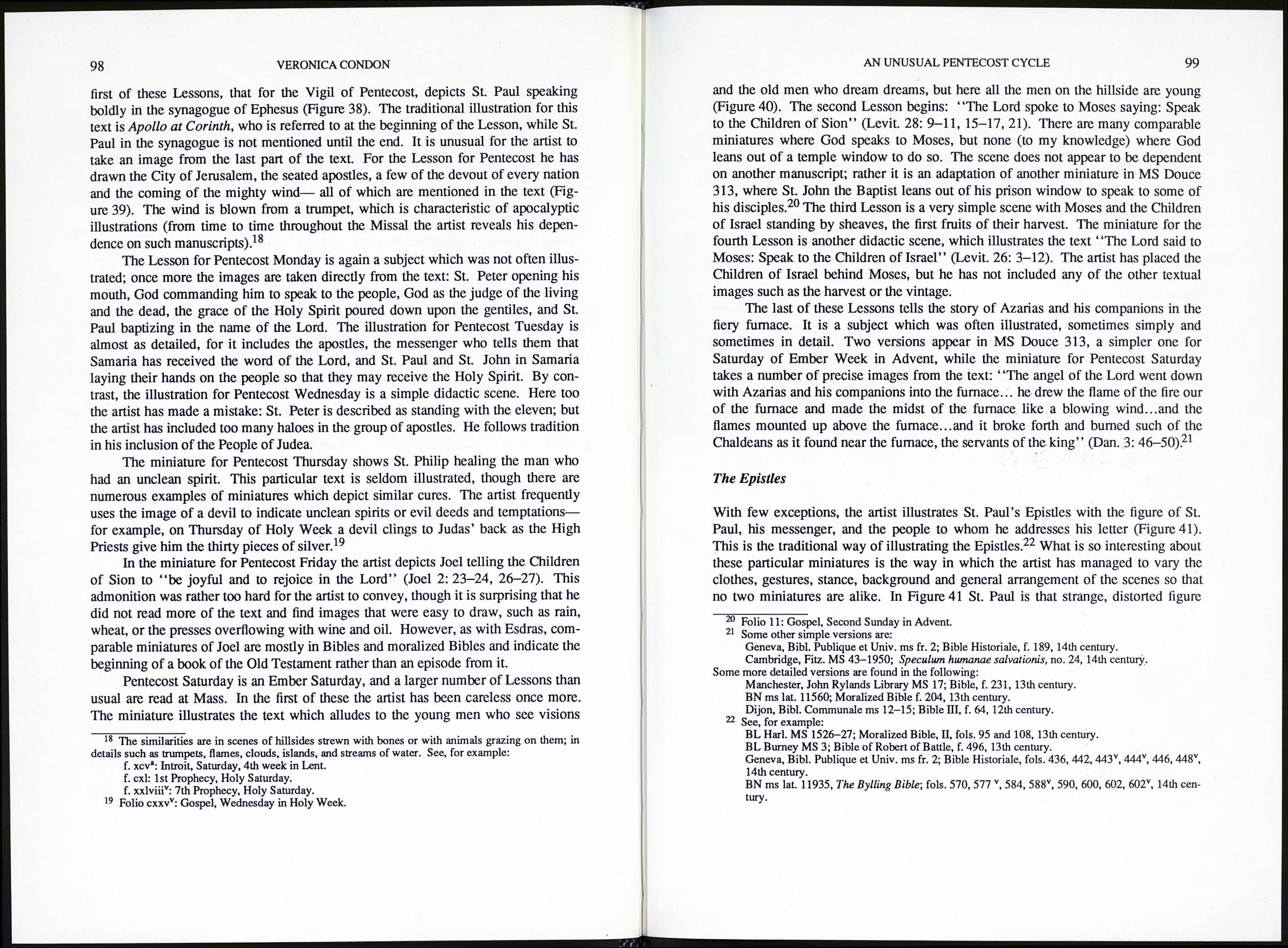 Masses which always include either the subject or the object of the prayer. There are
dozens of Collect miniatures throughout the Missal, but no two are alike. The artist
varies the shape of the altar, the position of the chalice or book, the placement of the
people; and he may add the Hand of God or the Dove of the Holy Spirit. He also
varies the number and the clothing of the laymen. The miniatures for the Vigil (Fig¬
ure 35) and Pentecost Wednesday include men who wear a form of religious habit
indicating, presumably, that they are confrères—if it is true that MS Douce 313 was
prepared for a Franciscan confraternity, then it would be appropriate for confrères to
be depicted as present at Mass during the major seasons of the Liturgical Year.

Some of the Introits of the Pentecost cycle are of subjects which were seldom illus¬
trated, while others are based on earlier traditions which occur most frequently in
Psalters or Bibles.

The first verse of the Introit of Pentecost Sunday is taken from the Book of
Wisdom, where it was usual to illustrate the text with the figure of King Solomon.
However, the artist of MS Douce 313 has sought to relate the miniature to the feast
rather than to the author of the text. He has drawn a conventional Pentecost scene
with the Dove of the Holy Spirit and with flames coming from it onto two groups of
apostles below; his arrangement of the apostles into sharply divided groups
separated by a central v-shaped space is reminiscent of some much earlier Psalter
and biblical traditions.12

A more unusual subject is that of Pentecost Monday (Figure 36). The artist
has followed the text exactly: “He fed them with the finest wheat, alleluia, and filled
them with honey from the rock” (Ps. 80; 17), verses which were also used and illus¬
trated for the Introit of the comparatively new feast of Corpus Christi. In the Pen¬
tecost Monday miniature the men are given the grains of wheat by the Hand of God
and bees fly near a hive at the top of a rocky hill, while in the Corpus Christi minia¬
ture the same images are drawn and arranged quite differently.13 There are several
traditions for illustrating this Psalm, though not necessarily this verse; by far the
most common illustration is that of David playing bells or another musical instru¬
ment. Other illustrations showed Jacob wrestling with an angel or men carrying the
Ark of the Covenant, none of which the artist would have found appropriate when

Some miniatures include the Virgin Mary:

the text was used to symbolise Holy Communion.14

Occasionally the artist makes mistakes, as he has done in the miniature for
Pentecost Tuesday. Here he has substituted David for Esdras, the author of the text.
Esdras was often illustrated, particularly in Bibles and moralized Bibles, but the
artist has chosen to focus on the words “God has called you to a heavenly king¬
dom” (4 Esdras 2: 36-37), and has drawn David with a crown, holding a harp and
gazing up to God who is commanding an angel to place crowns on the heads of the
two people who stand before him (Figure 37).15

Another unusual miniature is that for Pentecost Wednesday: Christ and a small
group of people watch as a little crowned figure climbs a ladder towards an angel in
heaven. The Introit begins “Oh God! When thou didst go forth in the sight of thy
people, making a passage for them” (Ps. 67: 8-9). It is difficult to relate this scene
to any other miniature, although it is likely that the ladder goes back to a tradition
where this Psalm was illustrated with the story of Jacob’s Ladder.16 The king climb¬
ing the ladder is probably David, since the artist rarely omits the author or introduces
an irrelevant figure. Another possibility is that he is St. Louis, King of France, who
was a great benefactor to the Order of Friars Minor. He has omitted the author again
in the Introit for Pentecost Friday. Here a priest chants, thus depicting the words of
the Introit: “Let my mouth be filled with Thy praise, alleluia, that I may sing” (Ps.
70: 8, 23).

In the last of this group of Introits, that of Pentecost Saturday, the artist has
mistakenly drawn St. John instead of St. Paul who usually appears beside passages
from his Epistles. Here the identification of the feast must have seemed of more
importance since the image of the Holy Spirit is shown with its rays falling down
upon the Romans to illustrate the verse “The charity of God is poured forth in our
hearts, alleluia, by his Spirit dwelling in us” (Romans 5: 5).17

The miniatures for the Lessons illustrate subjects from both the Old and New Testa¬
ments; they vary considerably in the amount of detail they take from the text. The

14 Examples occur in the following manuscripts:

16 There are many illustrative traditions for this Psalm; they include the “Mouth of Hell”, “Christ
trampling on the gates of Hell”, “Moses with Aaron”, and “Jacob’s Ladder”. “Jacob’s Ladder” is
employed quite frequently; see, for example: