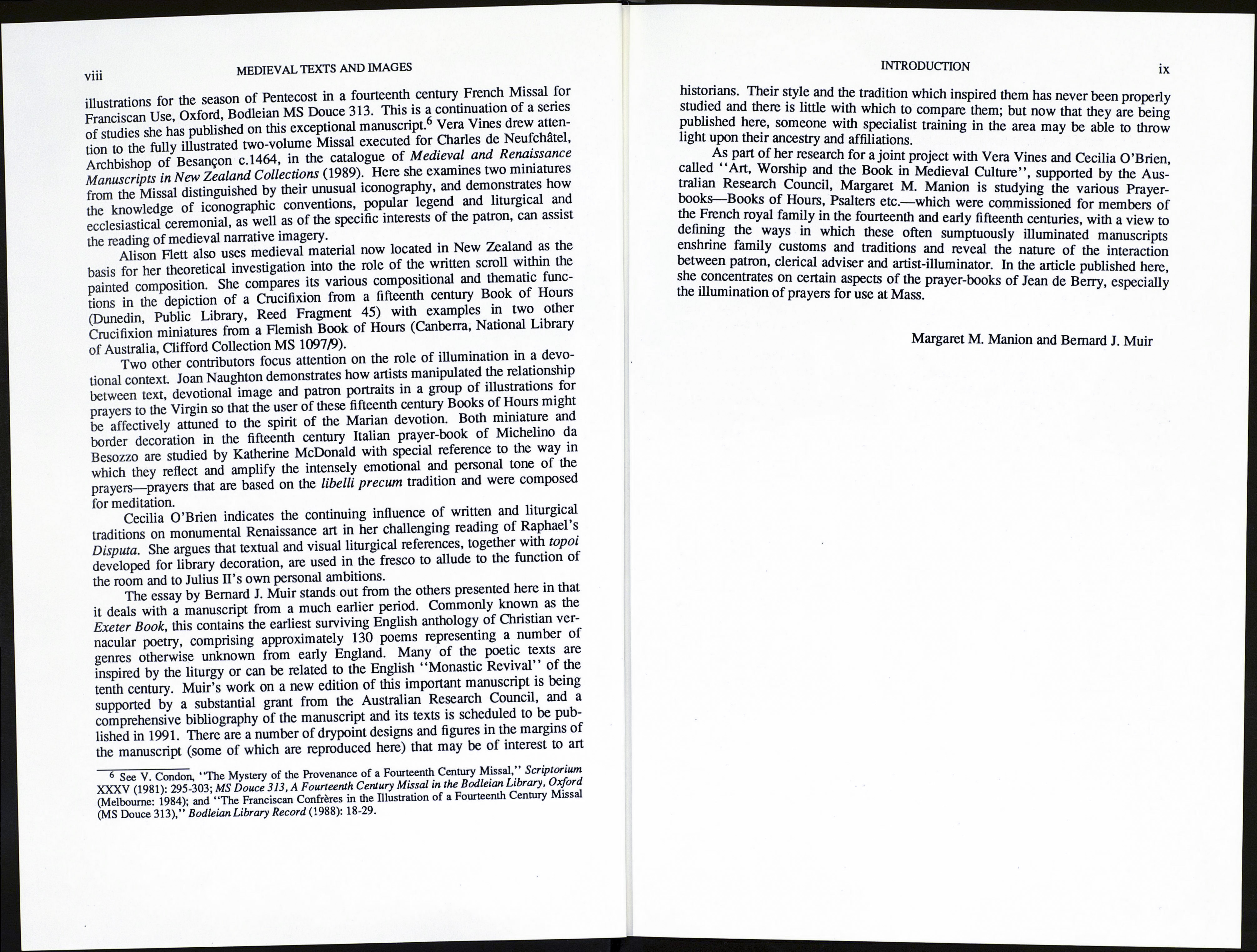 This collection of essays has its genesis in the authors’ shared interests in
manuscripts broadly called Medieval, since they belong to the tradition of book pro¬
duction before the age of printing, although there is some overlap with the Renais¬
sance period.

Hilary Maddocks’ examination of some of the characteristics of the illumina¬
tion of the Légende dorée and its relationship to the aristocratic patrons who com¬
missioned these manuscripts stems from her recently completed doctoral dissertation
on this topic.1 Through the generosity of two scholars in medieval English, Vida
Russell (formerly of Adelaide University) and Richard Hamer (Oxford), she was
able to take as the starting point for her research their identification and categoriza¬
tion of thirty-two extant copies of the Légende, all but four of which are
illuminated.2

Judith Pearce and Peter Rolfe Monks also develop aspects of their doctoral
research. They are concerned with the tradition of French illumination as it
developed in Paris in the so-called Bedford Master’s workshop in the 1420s and was
continued by The Master of Jean Rolin II c. 1435-1465. This Master’s work is in
turn linked with that of Maître François around whose name has been grouped a
large number of manuscripts produced in Paris and the Loire Valley c. 1465-1490s.
The Maître François “school” has long been of interest to Melbourne-based scho¬
lars since the National Gallery of Victoria possesses a fine example of his hand in
The Wharncliffe Hours? Monks provided in his dissertation an analysis of the Rolin
Master’s mature style as displayed in the illustration of Jean Gerson’s treatise
L’Horloge de Sapience, Brussels Bibl. Royale ms IV.lll.4 In his present article he
concentrates on an earlier phase of the artist’s style in the Book of Hours, British
Library MS Additional 25695. Pearce’s dissertation sets the illustration of the Salis¬
bury Breviary within a liturgical and iconographical context of mixed French and
English influence. Her study of the Advent Miniature explores the complex visual
and textual traditions behind an image which is of considerable importance in the
book since it introduces the Liturgical Year.

2 Russell and Hamer are preparing an English edition of the Golden Legend which is dependent on
the French translation.

A Study of the Art Work of the Rolin Master in the Horloge de Sapience, Brussels, Bibliothèque
Royale ms IV.l 11, and of his other known surviving Works”, diss., Melbourne University, 1986.