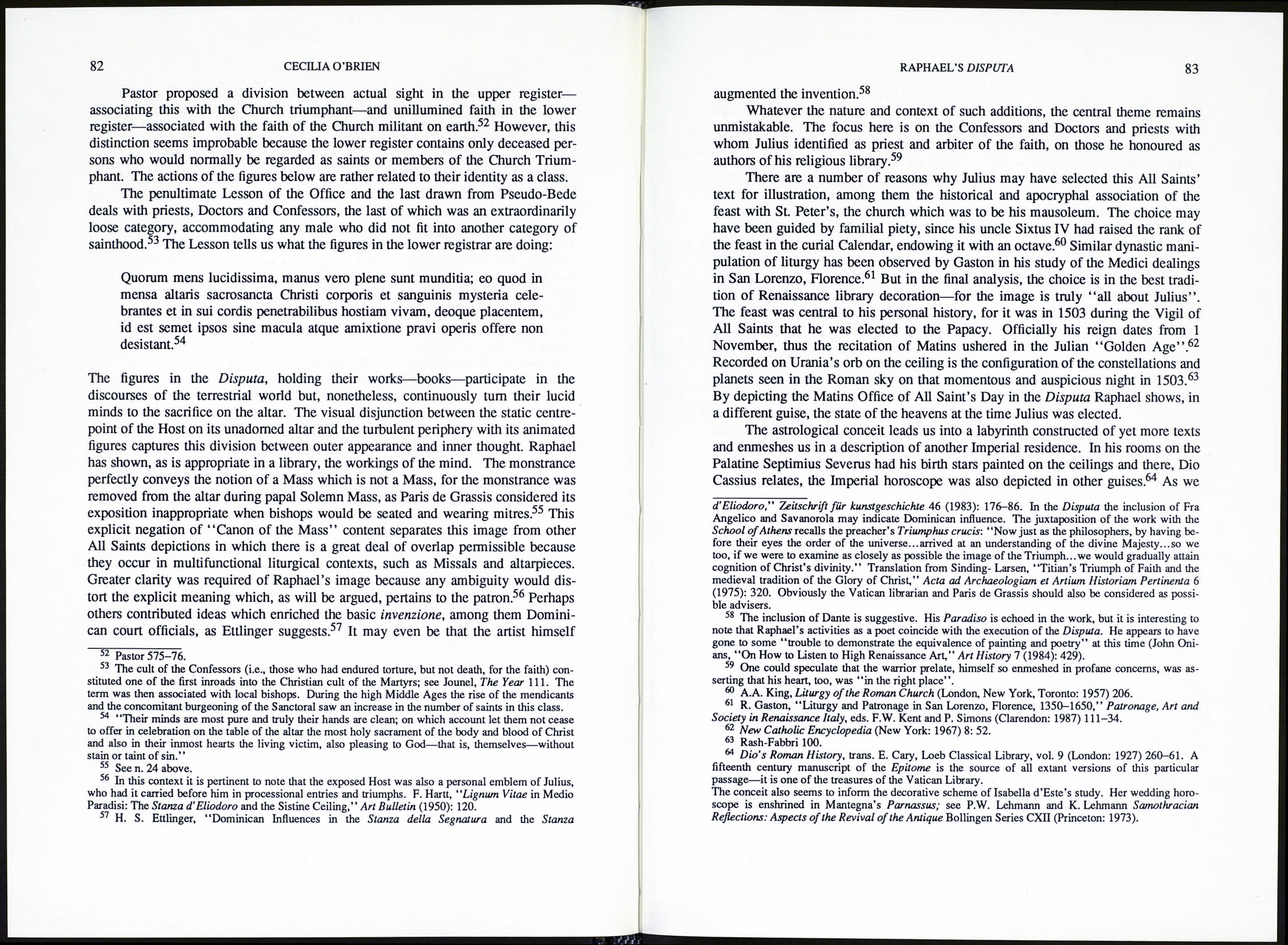 finished painting and gesticulates, indicating that it corresponds to the text. As a
parallel reading of the text and image will show, the book is a Breviary, and
Raphael’s script is the Office for Matins of the Feast of All Saints; his task was to
assemble its textual motifs into a visual whole.44

First let us turn to location or set. The actors are positioned within a sanctuary
surrounding a high altar; in the background is a building under construction, most
likely Julius’ Belvedere. On the right-hand side is a massive incomplete pier, prob¬
ably part of the new St. Peter’s, the foundations of which had been hastily laid by
Julius in 1506—much to the chagrin of some of the curia.45 The figures, both terres¬
trial and celestial, fill the apse, made of the living stones of the Church as in Ephe¬
sians 2: 19-20, “You are citizens with the Saints and members of God’s household;
you are built upon the foundation of the Apostles and Prophets with Jesus Christ
himself as the chief cornerstone”.46

The location is the high altar of St. Peter’s, a church associated with the insti¬
tution of the Feast of All Saints by Gregory III, who had an oratory built there in
honour of “all the holy Martyrs and Confessors and all the just who have reached
their consummation”.47 As recounted in the Golden Legend, the high altar of this
church was the site of the warden’s vision of the celestial liturgy during Matins of
the Feast of All Saints.48 Turning to the Matins Office itself, we find an emphasis on
church dedication. The legend of the Pantheon’s conversion into a church for All
Saints is narrated in its first Lesson from Pseudo-Bede, “Legimus in ecclesiasticis
historiis”. The theme of dedication is reiterated in the Response, “In dedicatione
templi”. In the fifteenth century in Northern Europe, the monstrance was similarly
displayed on the altar during feasts of dedication.49 The image of the Church
founded atop a mountain, which occurs a number of times in the Office, is used in
the Versicle and may be alluded to in the construction works in the left background
of the Disputa.

44 The Office is found in Vat. ms Urbinates lat. 112, a Roman curial Breviary. It replicates exactly
the Franciscan ordo of Haymo of Faversham, which was derived from the thirteenth century curial
Office and was standard for the use of Rome at least until the mid-sixteenth century; see S.J. Van Dijk,
The Sources of the Modern Roman Liturgy: The Ordinals of Haymo of Faversham and related docu¬
ments (1243-1307), 2 vols., (Leiden; 1963) 2: 167-69. The text from which the first eight Matins Les¬
sons are extracted is edited by J.E. Cross, ‘“Legimus in ecclesiasticis historiis’: a Sermon for All
Saints, and its Use in Old English Prose,” Traditio 33 (1977): 101-35. The Responses and
Versicles—which, naturally, do not occur in the sermon edited by Cross—are recorded below in the
Appendix.

45 For identification of the buildings, see Jones and Penny 60.

46 This verse, the little chapter for Vespers of the Common of an Apostle, may be consciously
evoked in the large cornerstone.

et scientie dei...”. This text was also the capitulum for the Office of the feast of
Trinity Sunday. Above Raphael’s Trinity are the numerous stars mentioned in the
reading. The Response, “I saw the Lord sitting upon a high throne”, evokes a
Majesty theme, and in depicting the enthroned Christ showing his wounds, Raphael
is using a type of Maiestas image common in Florentine liturgical manuscripts. In
these, artists depict the Christ of the Second Coming as the Christ of the Ascension
out of deference to the text of Acts 1:11, “This Jesus, who was taken up from you
into heaven, will come again in the same way as you saw him go.”50 Above Christ
in the Disputa are the seraphim invoked in the Versicle. The third reading lauds the
Virgin. Her worthiness to bear God, is emphasized in the Response. She sits, head
inclined, as if awaiting the Coronation which is her reward. The fourth reading con¬
cerns the angelic hosts, liberally represented in Raphael’s work—and refers con¬
sistently to their knowledge of divine matters echoing the titulus above the painting.
Its Response weaves together the motifs of angels and dedication: “In the presence
of the Angels, I will sing your praise; I will worship at your holy Temple”. The
angels venerate the Lord of Hosts in Julius’ new basilica. The next Lesson deals
with the prophets and patriarchs who “see God face to face”. The relaxed pose of
Adam conveys precisely this type of intimacy. The Response, “Precursor Domini”,
is taken from the liturgy of the feast of John the Baptist and stresses his primacy,
“Nullus maior inter natos mulierum...”. Raphael has placed him on a dais elevated
above the prophets and patriarchs and on the same level as the Virgin. The follow¬
ing reading describes the athletes of God, the apostles. The Response, “Iste sunt
viventes...”, emphasizes their foundation of the Church and their reward in Heaven,
not on earth. They are followed by the Martyrs.

The cast for the upper tier is complete. Representatives of each class seem to
be chosen on account of their importance in Papal liturgy, their status as priests and
prototypes of Julius, and because those depicted had been credited with direct vision
of God and this is appropriate to their position in the picture.51

51 The images are polysemous. For priesthood, the relevance of the apostles and deacons is obvi¬
ous. Moses, David and Abraham are prototypes of Christ the priest and, as such, accompany “Те igi-
tur” illustrations in Missals like that of Cardinal Bemadino de Carvajal (Sotheby’s, Western
Manuscripts and Miniatures, Sale Tuesday 11th December, 1984; lot 44). De Campos’ tentative
identification of the first figure on the right hand side as Judas Maccabeus would fit as the Maccabees
are associated with priesthood and church dedication in the Roman liturgy.

With respect to papal and Roman liturgy, Saints Peter, Paul, John the Evangelist, Stephen and
Lawrence were all a particular focus of the old Lateran liturgy. Saints Peter and Stephen were venerat¬
ed at the Vatican; see Jounel, Culte 369. Judas Maccabeus recalls the martyred Maccabees venerated
on Julius It’s titular feast, S. Pietro in Vincoli (August 1). Peter’s Liberation and a scene from Macca¬
bees are juxtaposed in the Stanza d'Eliodoro.

With respect to seeing God: Saints Peter and John correspond to the Transfiguration, Moses to the
Burning Bush, David to the Vision in the Wilderness, Abraham to the Vision of the Three Angels, and
Paul to the Transport into third Heaven. Stephen and Lawrence are credited with seeing God in their li¬
turgies (in the Responses to the third Lesson of Matins in their respective Offices).