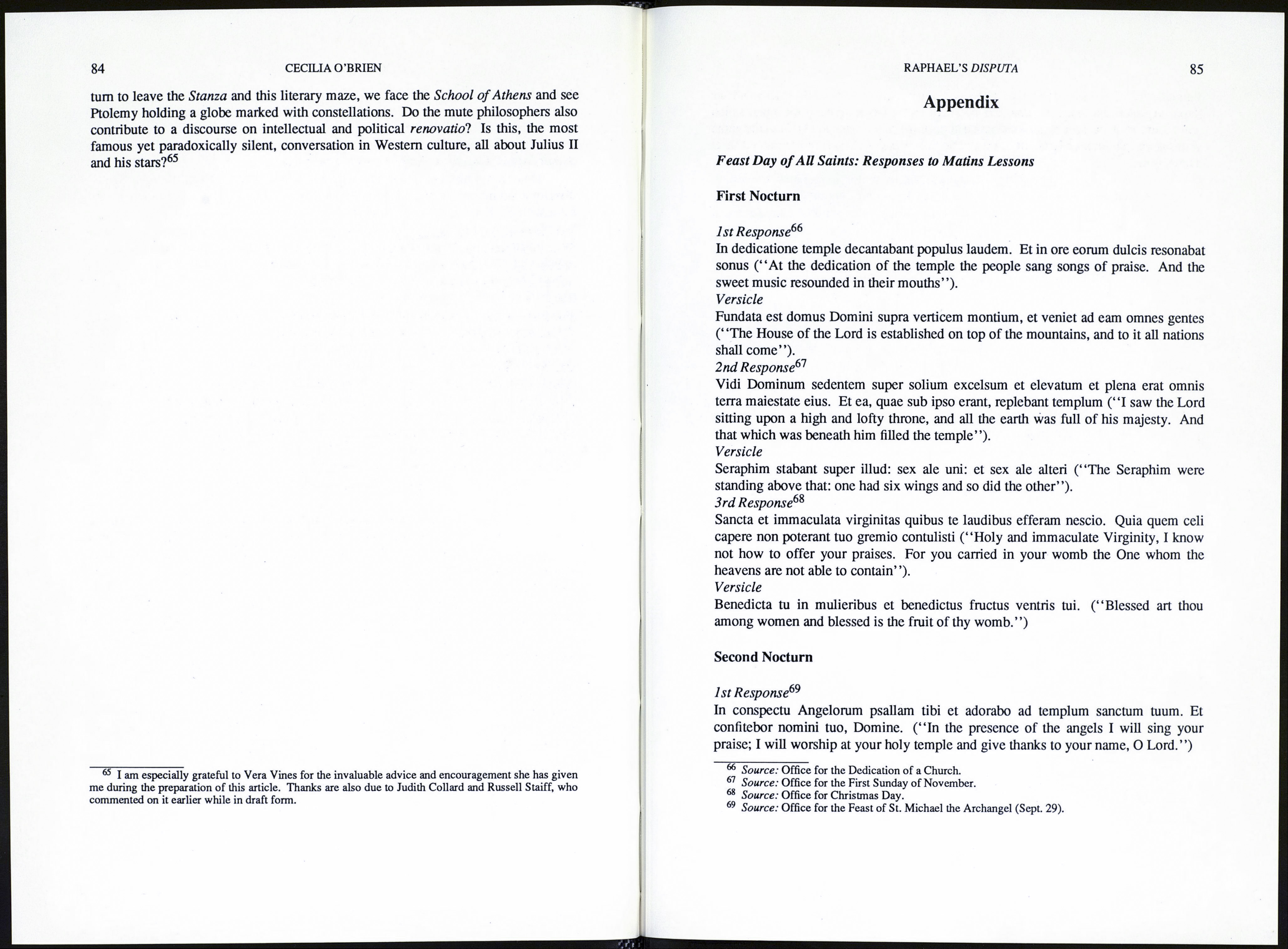 Pastor proposed a division between actual sight in the upper register—
associating this with the Church triumphant—and unillumined faith in the lower
register—associated with the faith of the Church militant on earth.52 However, this
distinction seems improbable because the lower register contains only deceased per¬
sons who would normally be regarded as saints or members of the Church Trium¬
phant. The actions of the figures below are rather related to their identity as a class.

The penultimate Lesson of the Office and the last drawn from Pseudo-Bede
deals with priests, Doctors and Confessors, the last of which was an extraordinarily
loose category, accommodating any male who did not fit into another category of
sainthood.53 The Lesson tells us what the figures in the lower registrar are doing:

The figures in the Disputa, holding their works—books—participate in the
discourses of the terrestrial world but, nonetheless, continuously turn their lucid
minds to the sacrifice on the altar. The visual disjunction between the static centre-
point of the Host on its unadorned altar and the turbulent periphery with its animated
figures captures this division between outer appearance and inner thought. Raphael
has shown, as is appropriate in a library, the workings of the mind. The monstrance
perfectly conveys the notion of a Mass which is not a Mass, for the monstrance was
removed from the altar during papal Solemn Mass, as Paris de Grassis considered its
exposition inappropriate when bishops would be seated and wearing mitres.55 This
explicit negation of “Canon of the Mass’’ content separates this image from other
All Saints depictions in which there is a great deal of overlap permissible because
they occur in multifunctional liturgical contexts, such as Missals and altarpieces.
Greater clarity was required of Raphael’s image because any ambiguity would dis¬
tort the explicit meaning which, as will be argued, pertains to the patron.56 Perhaps
others contributed ideas which enriched the basic invenzione, among them Domini¬
can court officials, as Ettlinger suggests.57 It may even be that the artist himself

53 The cult of the Confessors (i.e., those who had endured torture, but not death, for the faith) con¬
stituted one of the first inroads into the Christian cult of the Martyrs; see Jounel, The Year 111. The
term was then associated with local bishops. During the high Middle Ages the rise of the mendicants
and the concomitant burgeoning of the Sanctoral saw an increase in the number of saints in this class.

54 ‘ ‘Their minds are most pure and truly their hands are clean; on which account let them not cease
to offer in celebration on the table of the altar the most holy sacrament of the body and blood of Christ
and also in their inmost hearts the living victim, also pleasing to God—that is, themselves—without
stain or taint of sin.”

56 In this context it is pertinent to note that the exposed Host was also a personal emblem of Julius,
who had it carried before him in processional entries and triumphs. F. Hartt, “Lignum Vitae in Medio
Paradisi: The Stanza d'Eliodoro and the Sistine Ceiling,” Art Bulletin (1950): 120.

57 H. S. Ettlinger, “Dominican Influences in the Stanza della Segnatura and the Stanza

Whatever the nature and context of such additions, the central theme remains
unmistakable. The focus here is on the Confessors and Doctors and priests with
whom Julius identified as priest and arbiter of the faith, on those he honoured as
authors of his religious library.59

There are a number of reasons why Julius may have selected this All Saints’
text for illustration, among them the historical and apocryphal association of the
feast with St. Peter’s, the church which was to be his mausoleum. The choice may
have been guided by familial piety, since his uncle Sixtus IV had raised the rank of
the feast in the curial Calendar, endowing it with an octave.60 Similar dynastic mani¬
pulation of liturgy has been observed by Gaston in his study of the Medici dealings
in San Lorenzo, Florence.61 But in the final analysis, the choice is in the best tradi¬
tion of Renaissance library decoration—for the image is truly “all about Julius”.
The feast was central to his personal history, for it was in 1503 during the Vigil of
All Saints that he was elected to the Papacy. Officially his reign dates from 1
November, thus the recitation of Matins ushered in the Julian “Golden Age”.62
Recorded on Urania’s orb on the ceiling is the configuration of the constellations and
planets seen in the Roman sky on that momentous and auspicious night in 1503.63
By depicting the Matins Office of All Saint’s Day in the Disputa Raphael shows, in
a different guise, the state of the heavens at the time Julius was elected.

The astrological conceit leads us into a labyrinth constructed of yet more texts
and enmeshes us in a description of another Imperial residence. In his rooms on the
Palatine Septimius Severus had his birth stars painted on the ceilings and there, Dio
Cassius relates, the Imperial horoscope was also depicted in other guises.64 As we

d’Eliodoro," Zeitschrift für kunstgeschichte 46 (1983): 176-86. In the Disputa the inclusion of Fra
Angelico and Savanorola may indicate Dominican influence. The juxtaposition of the work with the
School of Athens recalls the preacher’s Triumphus crucis: “Now just as the philosophers, by having be¬
fore their eyes the order of the uni verse... arrived at an understanding of the divine Majesty...so we
too, if we were to examine as closely as possible the image of the Triumph... we would gradually attain
cognition of Christ’s divinity.” Translation from Sinding- Larsen, “Titian’s Triumph of Faith and the
medieval tradition of the Glory of Christ,” Acta ad Archaeologiam et Artium Historiam Pertinenta 6
(1975): 320. Obviously the Vatican librarian and Paris de Grassis should also be considered as possi¬
ble advisers.

58 The inclusion of Dante is suggestive. His Paradiso is echoed in the work, but it is interesting to
note that Raphael’s activities as a poet coincide with the execution of the Disputa. He appears to have
gone to some “trouble to demonstrate the equivalence of painting and poetry” at this time (John Om¬
ans, “On How to Listen to High Renaissance Art,” Art History 7 (1984): 429).

59 One could speculate that the warrior prelate, himself so enmeshed in profane concerns, was as¬
serting that his heart, too, was “in the right place’ ’.

64 Dio's Roman History, trans. E. Cary, Loeb Classical Library, vol. 9 (London: 1927) 260-61. A
fifteenth century manuscript of the Epitome is the source of all extant versions of this particular
passage—it is one of the treasures of the Vatican Library.