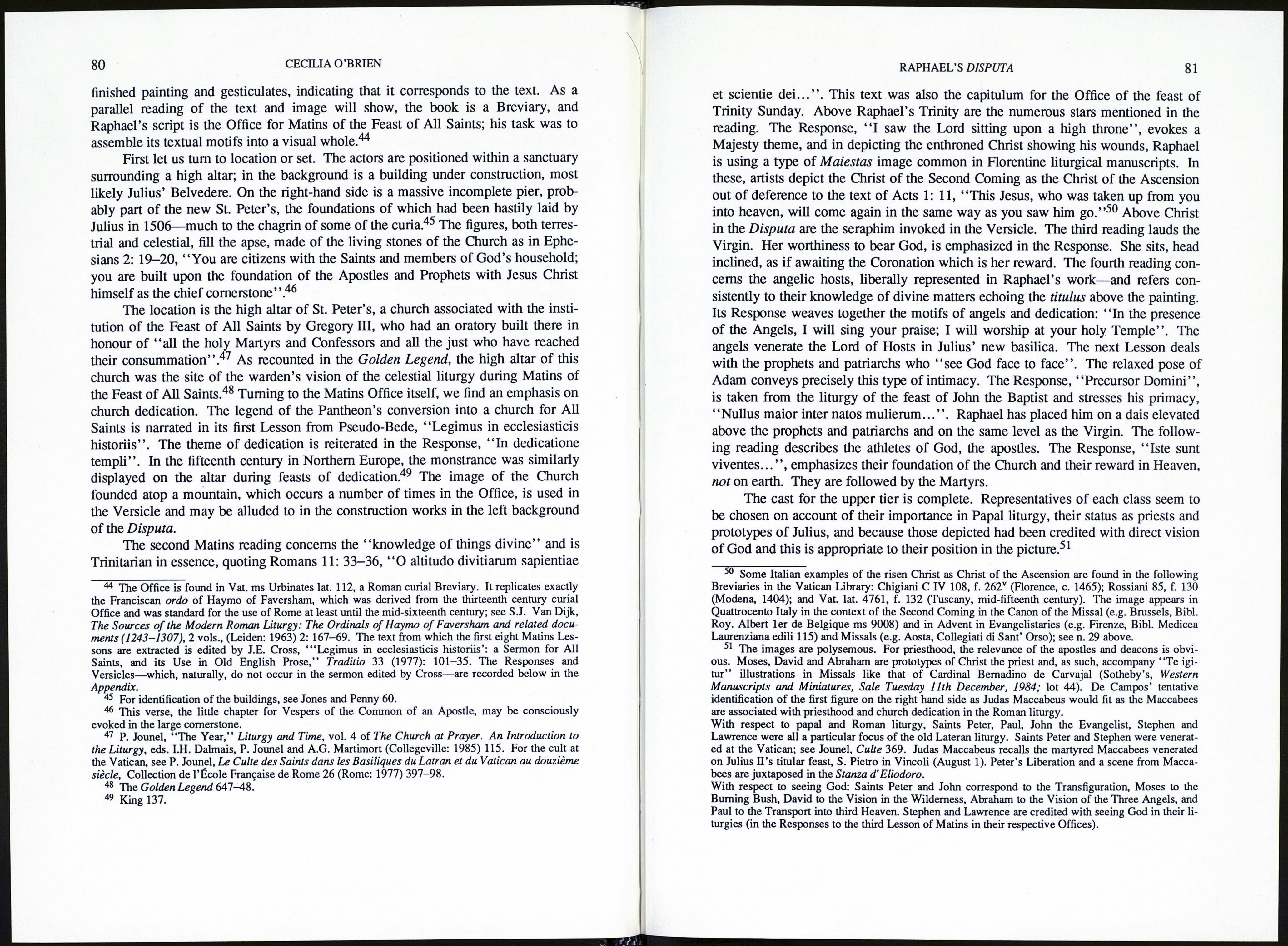 Matthias Corvinus (Figure 34) Attavante includes a Dixit Dominus Trinity (that is,
one where the Son and Father are side by side, as indicated in the opening words of
Psalm 109) surrounded by the Virgin, John the Baptist and the Apostles seated in a
semi-circle in the upper section of the illustration; they are praised by scroll-bearing
prophets arrayed beneath.30 On the opposite page, gesticulating figures are ranged
about an altar on which is placed the incipit of the text. Above the altar is the half-
length figure of God the Father making a gesture of blessing and holding an orb, as
he does in the Disputa (Figure 33). These configurations appear frequently in liturg¬
ical books illuminated by Attavante, and are related to the traditional Aspiciens a
longe schema used in the illustration of Advent. To a certain extent, Raphael’s work
represents a conflation of two images commonly found in contemporary liturgical
books. The context of Attavante’s Trinity is worth noting:31 its position at the
beginning of the Common of Saints indicates its status as an All Saints’ picture.

Vasari, it will be remembered, described the protagonists in Raphael’s work
not as theologians, but as un numero infinito di Santi?2 His comment, I propose, is
the key to the work. But before pursuing this, some iconographical cobwebs must
be cleared away. As Sinding-Larsen has trenchantly argued, traditional iconography
comes unstuck when dealing with “Paradise” images because of an underlying
assumption that one morphological type necessarily conveys one fixed meaning.33
Christian imagery, because it is embedded within the rich web of the liturgy, is not
amenable to such treatment. Illustrations in contemporary Missals, Breviaries, and
vernacular versions of the Golden Legend, both north and south of the Alps, do not
support the Panofskian proposition that pictorial emulation of that day’s Mass
liturgy with its vision of the Lamb is the sole way of representing All Saints.34
Scenes of Paradise with images such as the Coronation of the Virgin and Christ as
Maiestas Domini also occur, as do representations of the Trinity in various guises.35
The Trinity can take on a Throne of Grace format, a Dixit Dominus format, or be
represented as Three Persons seated side by side.36 Alternately, one figure can indi¬
cate the Trinity: the notion of Christ seated at the Father’s right hand is, for example,

34 E. Panofsky, Early Netherlandish Painting, 2 vols. (New York: 1971) 1: 214-17. For example,
he could not see the liturgical relevance of the Just Judges in the Ghent altarpiece, but both Office and
Mass are shot through with references to Justice and the Sermon on the Mount; see also the critique in
Sinding-Larsen’s “The ‘Paradise ...” 368-69.

36 For example the “Dixit Dominus” version in Vat. Urb. ms lat. 112 discussed above. A
representation of the Trinity as three persons introduces the feast of All Saints in Caxton’s 1527 En¬
glish edition of the Golden Legend (illustrated in The Golden Legend of Jacobus de Voragine, trans,
and adapted by G. Ryan and H. Ripperger (New York, London, Toronto: 1941) Plate ХІП).

implicit in the Maiestas Domini image which sometimes accompanies the feast.37 In
its All Saints’ image, a fifteenth century Breviary from Treviso evokes the celestial
liturgy of the Communion of Saints by showing God, between Mary and John the
Baptist surrounded by a mandorla of seraphim, one of whom holds the Host.38 This
is a clear reference to the “Supplices te rogamus” of the Canon, “command these
offerings to be borne by the hands of the holy Angel to Thine altar on high, in the
sight of Thy divine majesty”. Traditionally, there is cross-fertilization of the
imagery of the Canon with that of All Saints’ because of the relationship between
their texts.39 There is no standard way of depicting all the saints—Old Testament
figures such as Adam, Eve, Moses and David may find a place, or the scheme can be
extremely truncated showing only one class of saints, such as Virgin Martyrs or the
Apostles.40 Limitations of space, personal preference, workshop patterns and local
litanie significance all bear on the choice of saints.

These observations are offered as a prologue to a reading of Raphael’s Disputa
as an All Saints’ image, not because any direct visual relationship between these
sources and his image will be posited, but to demonstrate that the pictorial treatment
of All Saints is variable, that the notion of All Saints is inherent in the late Quattro¬
cento altarpieces which Raphael “quotes” in his work, and that because of the lati¬
tude found in the deployment of specific figures and compositional arrangements in
All Saints pictures, there is very little iconographical significance to be attached to
the so-called “radical” changes found in Raphael’s working sketches. Some have
argued that these changes, which concern the number and placement of figures,
imply that any programme for the work must have been ill-defined, vague and mut¬
able.41 But as Shearman demonstrates, the central germ of the picture—figures
clustered in two tiers about the Trinity in an architectural setting—is apparent in the
earliest study.42

While Gombrich has employed the analogy of a musician setting libretto to
score in speaking of Raphael’s achievement in the Segnatura, I shall use that of the
stage director interpreting a script.43 Raphael has “told” us as much. On the left
side of the fresco the artist, his head still wrapped in the cloth which protects his hair
from paint, stands poring over a book. His colleague Bramante turns to look at the

39 This is a point stressed by Sinding-Larsen, but worth re-iterating. The Ordinary of the Mass con¬
tains the following prayers referring to All Saints: Confiteor, “Oremus te Domine”, “Per interces-
sionem”, “Suspice sancta Trinitas”, “Communicantes”, “Nobis quoque peccatoribus", and “Libera
nos”. The Proper of All Saints recalls the Ordinary of the Mass in the Epistle (Apocalypse 7: 2-12)
which relates the vision of the Lamb (i.e., the Eucharist), and in the Secret “Muñera tibi”, which re¬
calls the Offertory. In the All Saints’ Office the kinship with the whole Church Year is stressed and
elements are taken from many other festal liturgies.

40 Adam, Eve, Moses and David appear at All Saints in a Golden Legend, BN ms fr. 244-5. Fe¬
male saints are accentuated in the Advent page of a Breviary from Treviso (Vat. ms Rossiani 125,
f. 12) but frequently in Italian Breviaries only male saints are depicted at All Saints.