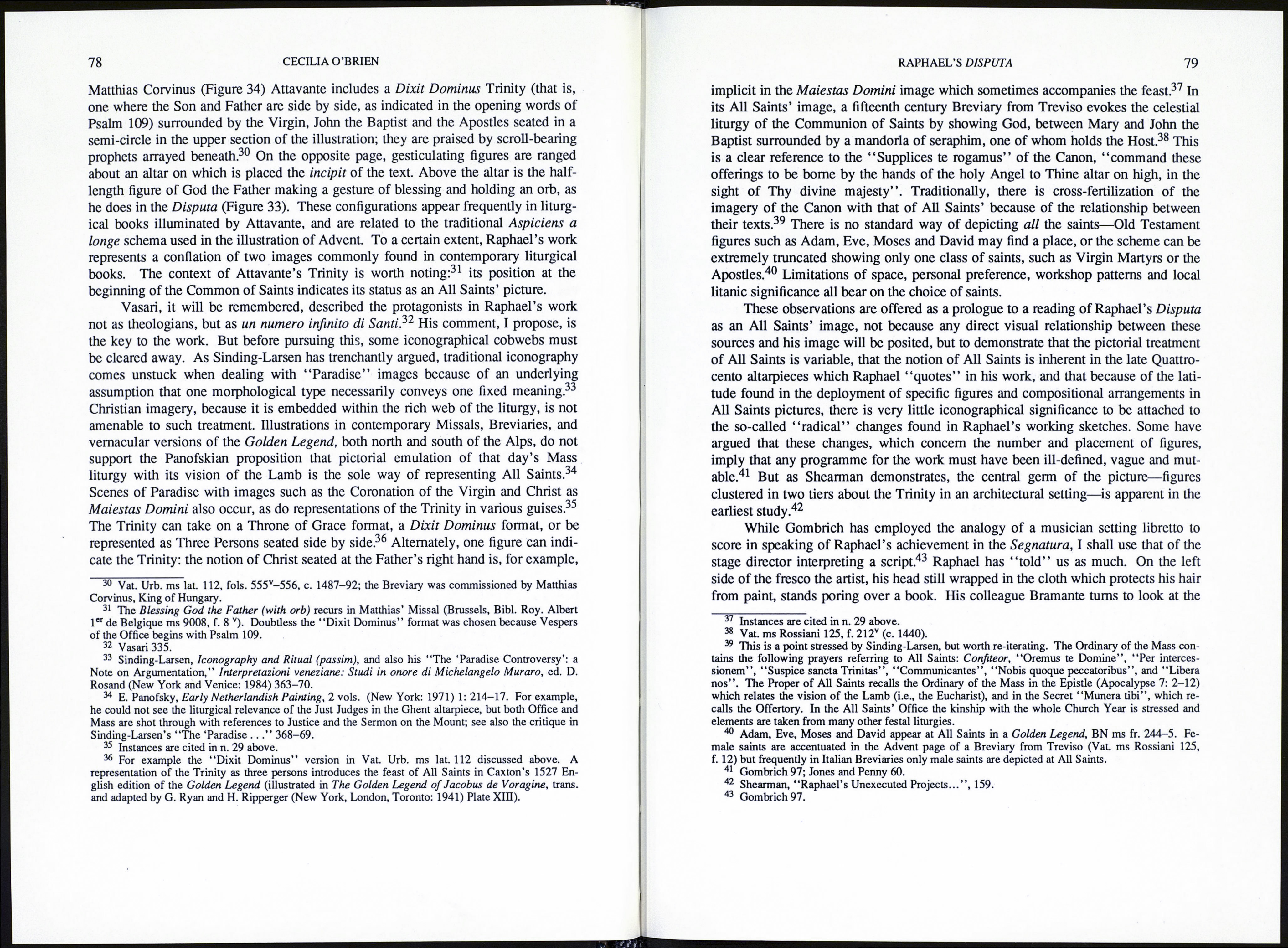 in the fifteenth century, Renaissance libraries were usually extremely limited in
stock. It is extraordinary that the Breviary and Missal, the very texts which were
commonly available to clerics and often known by heart, are so infrequently used
today as sources for iconographical studies.

Vasari’s familiarity with post-Reformation revisions of the liturgy seems to
have influenced his conclusion, which is not unnatural, but certainly anachronistic,
that the image referred to composition or revision of the liturgy by a group of scho¬
lars. He recognized elements of the Mass liturgy in the work. In particular, it seems
to evoke the “Suscipe, sancta Trinitas” of the Offertory.

Receive, О Holy Trinity, this offering, which we make to Thee in
memory of the Passion, Resurrection, and Ascension of our Lord Jesus
Christ, and in honour of the blessed Mary ever Virgin, of blessed John
the Baptist, of the holy Apostles Peter and Paul, of these and of all the
Saints.

A similar reading led some nineteenth century apologists to conclude that the image
was actually derived from such prayers.23 But from the demeanours of the per¬
sonages shown, from the lack of typical Mass furnishings on the altar (as seen, for
example, in the Mass at Bolsena), and from the presence of the monstrance on the
altar, Vasari rightly concluded that no actual Mass was depicted here 24

Perhaps Vasari was also reminded of the Mass because the image belongs to a
rather fluid class of “Presence” images usually employed in liturgical contexts.
Shearman points to the work’s typological and compositional affinities with a
number of late fifteenth century altarpieces.25 As de Campos has noted, the image
has overtones of the type of Paradise depiction found in earlier medieval apse pro¬
grammes.26 Ganzelli has recently published a similar image which appears in a
Florentine Missal illuminated by Attavante in 1487. In this book the risen Christ

24 The reservation of the Host in a monstrance on side altars dates from the fourteenth century in
Northern Europe; see A.A. King, Eucharistie Reservation in the Western Church (London: 1965) 137.
Wall and altar tabernacles were used for reservation in fifteenth century Italy; see H. Van Os, “Paint¬
ing in a house of glass the altarpieces of Pienza”, Simiolus 17 (1987): 21-38. However, contemporary
illustrations show that monstrances were also used, as the Corpus Christi image in at least one Breviary
reveals (Vat. B.A.V. ms lat. 7235, f. 200—Gubbio, с. 1470). These exposures were later formalized in
the rite of Benediction. However the exposure of the monstrance during Mass and on High altars
seems to post-date Raphael’s work. Its use during Mass was interdicted by Paris de Grassis, papal
Master of Ceremonies (King 194). The ritual wherein the exposed Host was allowed on the altar dur¬
ing Mass—the Forty Hours prayer—was fostered in Counter-Reformation Northern Italy by Carlo Bor¬
romeo; see R. Cabie, The Eucharist, The Church at Prayer, ed. A.G. Martimort (Collegeville: 1986) П,
248-49; and with regard to the same ritual up until Vatican П, “Without necessity, grave cause or spe¬
cial induit. Mass may not be said at an altar on which the Sanctissimum is exposed , Adrian Fortescue,
The Ceremonies of the Roman Rite Described, ed. J. O’Connell, 7th ed. rev. (London: 1943) 61.

showing his wounds, surrounded by figures seated in a synthronos arrangement
above a scene of the Resurrection of the Flesh, accompanies the “Te Igitur” of the
Canon (Figure 32).27 This depiction in fact preceded Fra Bartolomeo’s Last Judge¬
ment rendering, so often cited as Raphael’s source. In evoking such earlier images
Raphael could have scarcely avoided some form of tacit reference to the Canon of
the Mass which would provoke recognition in a viewer familiar with the eucharistie
liturgy. However, as noted above, the image explicitly confutes such readings; a
different focus is intended.

The evidence of contemporary liturgical books indicates that the Court of
Heaven with the Trinity and other related images—including the Coronation of the
Virgin, the Maiestas Domini and the Last Judgment—also appear in a variety of
liturgical contexts other than the Canon.28 These include the feasts of the Assump¬
tion and All Saints and the first Sunday of Advent.29 Elaborate Trinitarian imagery
like that found in the Disputa can occur in a variety of contexts. In the Breviary of

^ The explanation for this lies in the liturgy. All these images are parousial and demonstrate the
culmination of a salvation achieved through the Eucharist. The liturgies of Advent, All Saints, the As¬
sumption and the Canon of the Mass have a summa-Xûie. quality. Office and Mass texts for the feast
days overlap. The Office readings for the Assumption were, for example, not concerned with the his¬
torical event, but with the resurrection of the flesh in general as discussed in Jerome’s letter “Cogitis
me о Paula”. It is thus related to both the First Sunday in Advent and to the feast of All Saints in
theme. Thus a Coronation image might feasibly be replaced with a resurrection of the flesh image
without much change in meaning. This is precisely what occurs later in the altar wall of the Sistine
Chapel (which had a double dedication to the Virgin Assumptive and to All Saints).

29 For example, the Coronation frequently introduces Advent in French Breviaries and Golden
Legends. One Italian example appears in a Milanese breviary of c. 1450 (Vat. ms lat. 9217). The im¬
age is used for All Saints in two French Breviaries: the Salisbury Breviary (BN ms lat. 17294, f. 618);
and Châteauroux (Bibl. Mun. ms 2, f. 387 v). For knowledge of the French Breviaries cited in this arti¬
cle I am grateful to Judith Pearce, who allowed me to consult her Text and Image in the Salisbury Bre¬
viary, diss., Australian National University, 1987.

The Virgin and Child and Saints appears in two Golden Legends for the feast of All Saints (BL MS
Add. 19907 and Munich, Bayerische Staatsbibliothek ms Gall 3). I am indebted here to Hilary Mad-
docks who allowed me to consult her unpublished material on the Légende Dorée.

The Maiestas Domini occurs at Advent in a French Golden Legend (BN ms fr. 244-5) and at All Saints
in a Tuscan Breviary (Vat. ms lat. 4761, f. 348v) which bears the arms of Julius П (on a folio inserted
some decades later). It commonly appeared at the Preface or “Vere dignum” in earlier Missals; see
Staale Sinding-Larsen “Some observations on liturgical imagery of the twelfth century,” Acta ad Ar-
chaeologiam et Artium Historiam Perlinentia 8 (1978): 198-201, and O. Pächt, Book Illumination in
the Middle Ages (London: 1986) 39—44.