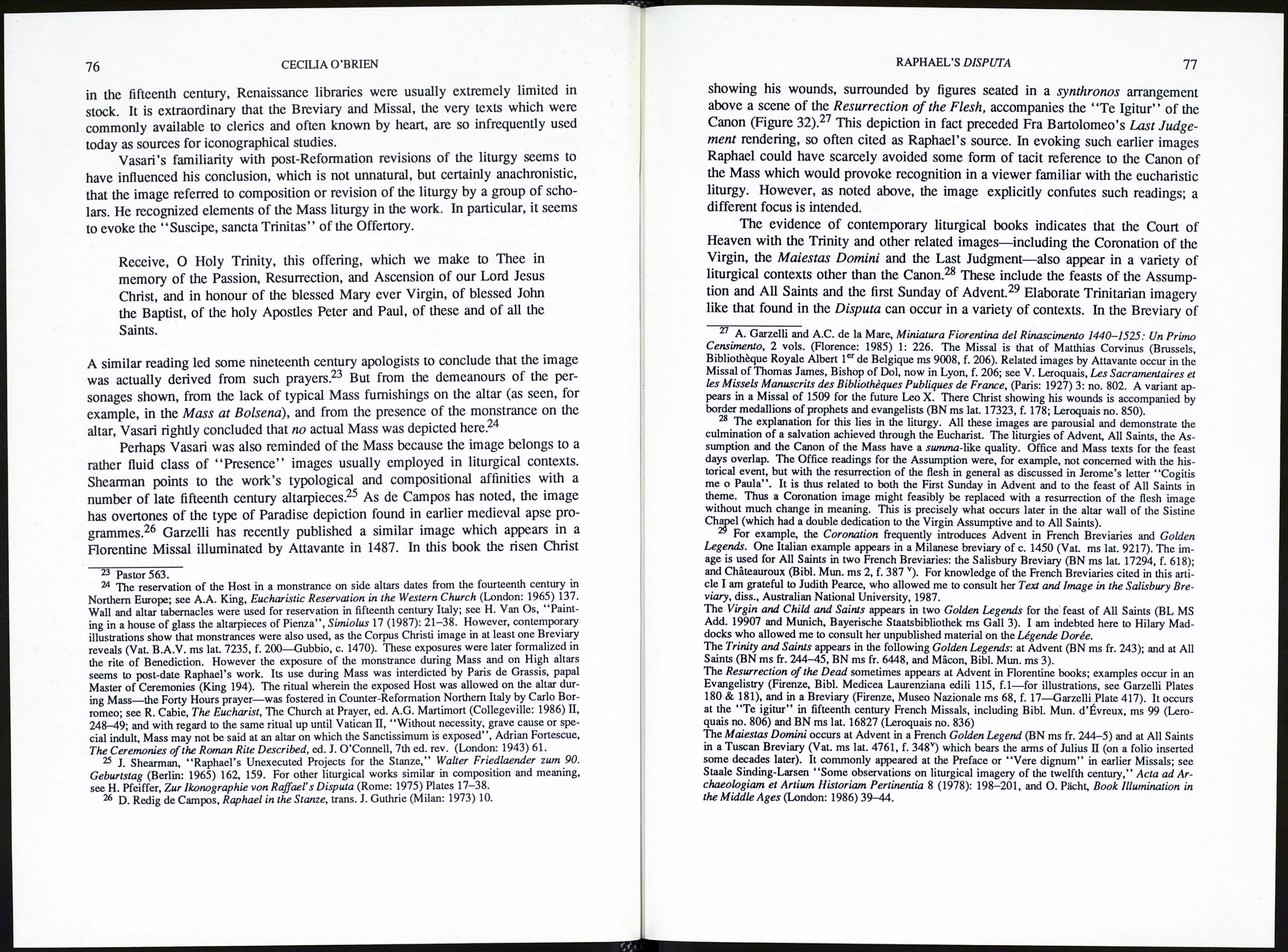 make explicit reference to Papal and Imperial History. Finally Rhetoric, Poetry and
Song constitute the last divisions in the catalogue of Urbino’s Latin books—the
relevance to the Parnassus is obvious.

This comparison of the Stanza’s decorative scheme with the Urbino catalogue
suggests that a similar document may have contributed to the invenzione of the
ensemble. Part of the task of the inventor, most probably Julius,10 would have been
to amalgamate and perhaps omit some disciplines in order to fit those he wanted on
to four walls. Personal interest may account for particular emphases found in the
decoration and it is known that theological and legal texts formed the bulk of Julius’
library holdings.11 Thus a number of scenes in the ceiling refer to judgement: The
Fall of Man, the Flaying of Marsyas and the Judgement of Solomon.

I have drawn attention to the probable fluidity and overlapping of the identities
of the disciplines in the four frescos because this calls into question the long-held
assumptions that the four tituli held by the female figures on the ceiling refer
exclusively to the disciplines of Theology, Jurisprudence, Philosophy and Poetry,
and that each designates the central theme of the fresco located immediately
below.12 On the contrary, even the literary derivations of the tituli employed would
suggest that the confluence of knowledge, rather than a rigid stratification into four
disciplines is being accentuated. The phrase “causarum cognitio” held by the so-
called Philosophy figure above the School of Athens is taken, as Rash-Fabbri notes,
“from a passage in Cicero’s Topica devoted to the importance of knowledge of
causes not only for jurists and poets, but also for philosophers”.13 Even more sug¬
gestive is the derivation of the titulus “notitia divinarum rerum”, usually held to
refer to Theology, from Justinian’s definition of Jurisprudence.14

Does the term “notitia divinarum rerum” really denote theology per se, or
something broader? Perhaps as the appearance of non-theologians like Dante and Fra
Angelico in the Disputa below tends to suggest, this titulus should be read quite
literally. The knowledge, or concept, of divine matters is not the exclusive property
of theologians, but rather of the faithful who constitute the Mystical Body of the
Church. Even Aquinas, a professional theologian, placed revelation as in Scripture
and tradition, especially the liturgy, above the discourses of theologians. “Theology
as the science of which God is the subject argues from the divine knowledge of God
contained in the Scriptures, whose main aspects are summarized under specific arti¬
cles of faith.”15 “The defining of the faith in articles is the office of the Roman

14 Rash-Fabbri 98. In the comers of the ceiling, the scenes in the rectangles— the Fall, the Judge¬
ment of Solomon and the Flaying of Marsyas— also seem to point to a blending of the disciplines of
Law, Theology and Poetry. See Jones and Penny 52-55.

Pontiff” [as stated in the Decretals].16 Thus Julius had legal status as final arbiter of
“notitia divinarum rerum”, hence the appropriateness of a titulus taken from a legal
text. Rash-Fabbri has argued that other allusions to the law discernible in the Stanza
are indicative of a general theme of “an age when all knowledge is united in the ser¬
vice of Justice”.17

The notion that “Theology” is presented in the Disputa has led to various
interpretations of the work. Many of these have as a starting point Vasari’s miscon¬
ception that the figures depicted are discoursing or disputing on the real presence, “e
sopra l’ostia, che è sullo altare, disputano”.18 This reading is apparently grounded in
Vasari’s experience of the Counter Reformation and led to the assigning of the
misappelation Disputa to the work.

In the decades which separated Vasari from Raphael a fundamental shift in
religious practice had occurred. As Kavanagh has argued, the sixteenth century saw
a variety of factors, including printing, humanism, and doctrinal dissent, contribute
to an up-ending or inversion of the patristic maxim legem credendi lex statuat sup-
plicandi (“the law of worshipping is based upon the law of believing”).19 “Rite
became less a means than an obstacle for the new textual piety ... The truth now
lies exclusively in the text, no longer on the walls, or in the windows, or in the
liturgical activity of those who occupy the churches.”20

This new hegemony of the learned text informed Vasari’s alternate description
or interpretation of the Disputa as representing saints “ordering” or “writing” the
Mass. Correction of liturgy by committee consensus post-dated Raphael’s Stanza by
some decades. “The technology of printing...greatly speeded up liturgical change
by giving this previously labyrinthine and long-term process over to committees of
experts whose work was predominantly textual and theological rather than ritual and
symbolic.”21 As I argue below, Raphael’s image utilizes the earlier ritual tradition
to convey a specifically Julian theme: neither Julius nor Raphael could have antici¬
pated the revolution which would make the painting’s meaning less than patent.

Iconographers, the heirs to the triumph of literary expertise, often base their
interpretations of Christian art of the pre-Reformation on the dicta of exegetes and
commentators, ignoring the liturgical bedrock on which these images rested. Even
when a precise “text” rather than an oral, visual or ritual tradition may be relevant
to the interpretation of a work of art, the emphasis placed by modem scholars on cer¬
tain types of texts seems lop-sided. On a purely pragmatic level, the question as to
whether the kinds of texts now enshrined in Migne were readily and widely available
is rarely addressed.22 Despite an exponential rise in the number of books produced

22 For this “Mignomania” see S. Sinding-Larsen, Iconography and Ritual: a Study of Analytical
Perspectives (Oslo: 1984) 198.