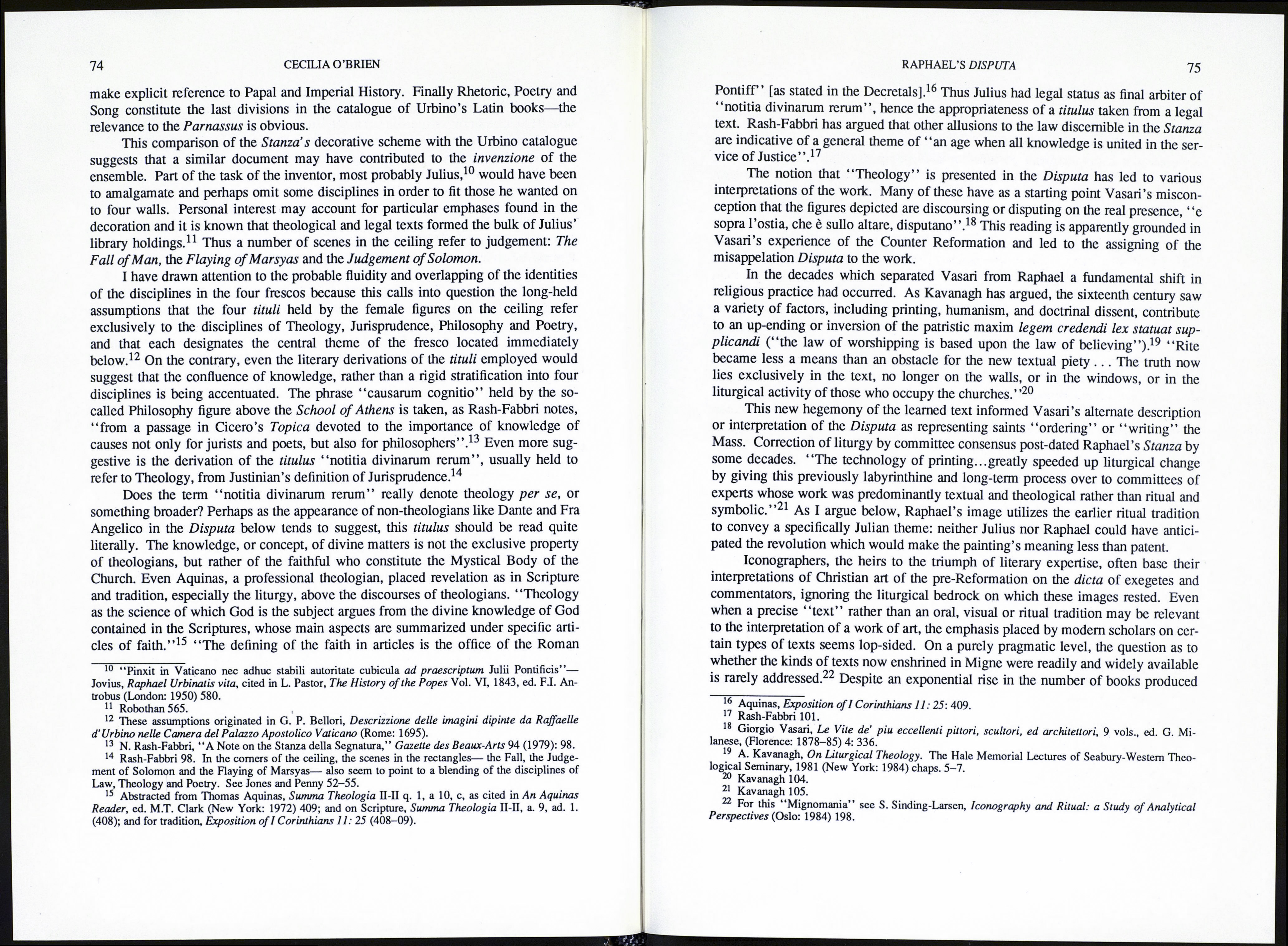 However, in general terms, the iconography of the ensemble as articulated by Gom-
brich, who was mistaken about the room’s purpose, remains valid. The overall
theme is, in his words, “knowledge and virtue as expressions of the divine”.4
Clearly this message is as pertinent to a library as it is to an administrative chamber.
Another conclusion based on the older erroneous identification remains valid. The
scheme depends on earlier programmes in which personifications of the Virtues and
Liberal Arts were linked with depictions of distinguished practitioners of those arts:
similar combinations found a place in Renaissance libraries as well as council halls.5

Perhaps the fame of the work and its place in the canon of “universally”
relevant masterpieces has deterred scholars from assessing the iconography contex¬
tually. Why was it employed in the library of this particular patron? Indeed, the
Stanza scheme is still discussed as if it consisted merely of a generalized visualiza¬
tion of the divine origin of knowledge as lauded in contemporary epideictic oratory.
Specific references to the patron—his stemma on the altar cloth in the Disputa, his
portrait in the scene of the Decretals and allusions to his Belvedere and Vatican
building programmes in both the School of Athens and the Disputa—are dismissed
as co-incidental, and not treated as conscious allusions to the notion of Pope as pri¬
est, ruler and builder, which had been articulated during the preceding century. Jones
and Penny, for example, maintain that the inclusion in the ceiling depiction of
Urania’s orb of the planetary formations which appeared in the Roman sky on the
night of Julius’ election, is irrelevant to the overall meaning of the ensemble, adding
only a minor embellishment.6 Such an approach does not accord with what is known
of the decoration of Renaissance studioli. The surviving contents of both Federico da
Montefeltro and Isabella D’Este’s studies reveal that the commissioned decorations
were replete with references to the owner and his or her literary pursuits.7 Presum¬
ably the contents of such schemes were governed by written or oral instructions of
some complexity. However, these decorations had other functions besides replicat¬
ing prior documents. In effect they mapped out the library space, denoted the
literary nature of its contents, and most importantly, referred to the patron who

4 E.H. Gombrich, “Raphael’s Stanza della Segnatura and the Nature of its symbolism,” Symbolic
Images (London: 1972): 88. He bases his conclusion on the fact that the Stanza does not comply with
Albertini’s description of the library—“quam tua beatitudo construxit signisque planetarum de coe-
lorum exomavit” (Opusculum, 1509). Shearman shares the view that this description is incompatible
with the actual appearance of the room arguing that it is a ‘ ‘generalised, rhetorical vision of the proper
appearance of libraries” (n. 91). However, at least two globes are depicted in the scheme. Further¬
more, if the conclusions presented in this paper are correct, the horoscope is the major iconographical
theme of the first wall.

5 Shearman 45-46, n. 85. For a summary of nineteenth century scholarship. For a survey of later
library decoration and, inter alia, discussion of the Segnatura, see André Masson, The Pictorial Ca¬
talogue Mural Decoration in Libraries, The Lyell Lectures, Oxford 1972—73 (Oxford: 1981).

State University: 1986). For the d’Este studiolo, see E. Verheyen, The Paintings in the Studiolo of Isa¬

would customarily be the surveyor of the room. Thereby the owner was explicitly
located within this private and privileged domain. The decorations functioned deic-
tically like the phrase “dear reader” in the Victorian novel.

A similar index-like quality is evident in Raphael’s Segnatura. There it is
achieved with clarity and economy through conscious and witty manipulation of the
paradigmatic bibliographical index: the library catalogue itself. If we explore the
relationship between the arrangement of protagonists in Raphael’s four frescoes and
the lists of authors in contemporary library catalogues, a close correspondence is
revealed between the ordering of the frescoes and the hierarchy of books found in
the most widely used Renaissance cataloguing system. Developed by Tommaso
Parentucelli, the future Nicholas V, for use by Cosimo de Medici, this form of
catalogue was also employed in the Pesaro, Fiesole, Vatican and Urbino libraries.8

The inventory of the Urbino Library furnishes an extant example of such a
catalogue. Moreover, both patron and artist had connections with Urbino.9
Raphael’s father had composed a panegyric on that library, and in 1508, on becom¬
ing the Duke of Urbino, Julius’ relative, Francesco Maria della Rovere, had acquired
the library. Let us consider Raphael’s Segnatura frescoes and the surviving Urbino
inventory in parallel. When this is done it becomes apparent that the usual formula¬
like equation of each monumental scene with one of four specific disciplines—
Theology, Philosophy, Jurisprudence and Poetry (for example, of the School of
Athens with Philosophy)—is too rigid. At the head of the Urbino catalogue are the
works of Scripture, followed by liturgical books; then come patristics, wherein the
Doctors of the Church— Jerome, Ambrose, Augustine and Gregory—are given pre¬
cedence over a mostly chronological list of exegetes and theologians leading up to
Aquinas and Bonaventura. In the Disputa the dominance of the Trinity and of bibli¬
cal figures in the upper tier is notable, as is the centrality of the four doctors in the
lower tier (Plate 8). The monstrance displayed on the altar alludes to liturgical prac¬
tice. Next the Urbino catalogue lists philosophical works from Aristotle and Plato to
the moderns. Science, Mathematics and Astronomy follow and the section is
rounded off with works on Architecture by Vitruvius and Alberti. The School of
Athens includes not just philosophers and mathematical scientists, but portraits of
the contemporary architects Bramante and Michelangelo in the guise of ancients. It
is set against an ideal rendering of the incomplete crossing of the new St. Peter’s;
thus Architecture is denoted as a subsidiary theme. Two further disciplines in the
library catalogue—Medicine and Cosmography—are denoted in the Timaeus held by
Plato. This text deals with both these natural sciences. Jurisprudence, Imperial His¬
tory and Biographies of Popes follow in the catalogue. The Pandects and Decretals
denote Jurisprudence. Moreover, as the only historical scenes in the Stanza, they