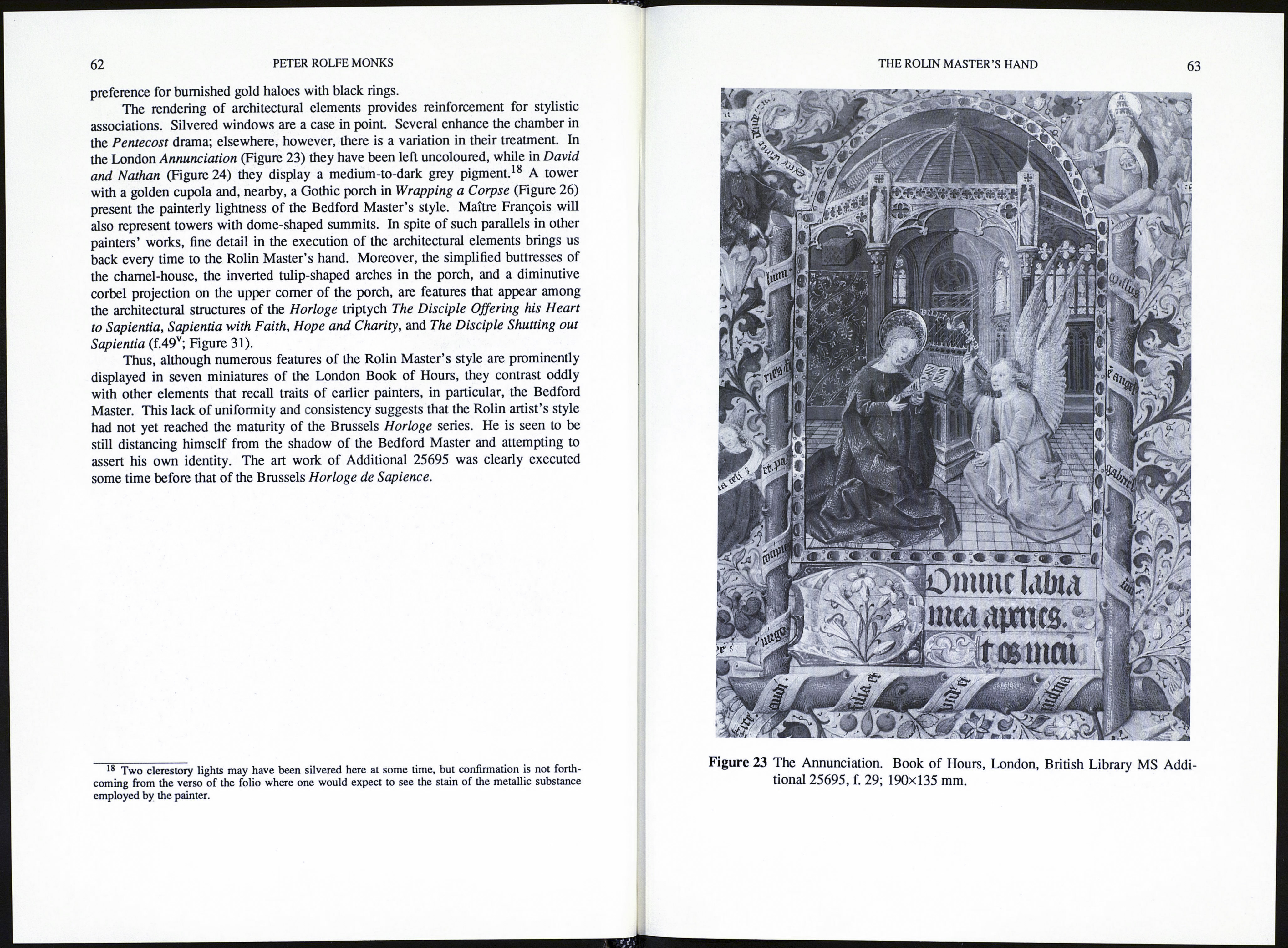 message stands in the vegetal border at the upper right. He is encircled by orange
cherubim and garbed in a blue cope edged with gold, worn over a mauve cassock.
His head is crowned with a red and gold triple tiara. His left hand supports a cruci-
gerous golden orb. This treatment may be compared with another instance of
archaic placement by the Rolin Master in the Clock Chamber miniature (f. 13v) of
the Brussels Horloge. Here, a bell cord extends from the body of the painting to the
upper border, where it is attached to a small turret, ostensibly on the roof of the
building.11

The orange used occasionally by the Rolin Master as a contrasting colour for
garments or accessories is present too in these marginal vignettes. It is less vibrant
than the hue employed later by Maître François in a similar way.12

Seven large paintings in the London Horae are by the Rolin artist. They are
the following: The Annunciation f. 29; The Presentation in the Temple f. 106; The
Crucifixion f. 121 (Plate 6); Pentecost f. 139; The Coronation of the Virgin f. 147
(Figure 25); David and Nathan f. 153 (Figure 24); Wrapping a Corpse f. 165 (Fig¬
ure 26).13 It would be a mistake, however, to imagine that these pictures uniformly
mirror the stylistic qualities later found in the Brussels Horloge series.

The Virgin and angel’s forms in the Annunciation are solid and display firm
colour; both are traits of the Rolin artist, but the serpentine undulations of which
mention has already been made are lacking. To find parallels it is necessary to look
further than the Horloge illustrations. They occur, to be sure, in another Annuncia¬
tion of a Book of Hours in Baltimore, Walters Art Gallery, MS Walters 251 (Fig¬
ure 27). A similar bulkiness of form and monumental drapery in garments is clearly
present, and the anthropomorphic S-curve is absent.14

Both the London and Baltimore Annunciations depict intricate architectonic
detailings common to the Rolin Master’s hand, such as the treatment of Gothic win¬
dow tracery and scaled-down arcading. The pictures also expose a less felicitous
element, the misalignment of a prie-dieu and furniture with the perspective chosen
for the floor tesserae.

Another trend is apparent in the London Annunciation, it is the retention of
traits from the Bedford Master’s milieu. One is the shallow-ribbed golden dome
covering the principal structure; another is the gold-decorated tracery between the
forward-placed pendants; a third is the Gothic quatrcfoil frieze, which occurs also in
the The Presentation in the Temple and in Pentecost. Small mauve and white sta¬
tues of prophets set in niches above leading figures are a further indication of that
workshop’s influence on the Rolin painter.

Each has a jewelled frame, as does the Court of Heaven painting of the Horloge series. Such a
frame does not seem to be a decorative trait of the Rolin Master, however. The identical embellish¬
ment runs across the low wall in the foreground of a second Court of Heaven on f. 199v of the same
Brussels Horloge volume. See Eleanor Spencer, “Gerson, Ciboule and the Bedford Master s Shop,
Scriptorium XIX (1965): 104-8 and Plate 12.

Parallel lay-outs for the themes in Additional 25695 are present in other illus¬
trations from his brush. The example of one subject will suffice. Iconographically,
the Crucifixion in Lyons, Bibliothèque de la Ville ms 517, f. 183v (Figure 28) recalls
the tableau in the London volume. The postures assumed by the tortured Redeemer
and the two thieves in both of these lay-outs are repeated in Christ Offered the Sop
(f. 80; Figure 29) of the Horloge series.15

Little divergence in technical lay-out and coloration can be found between
David and Nathan (Figure 24) and Wrapping a Corpse (Figure 26) and the other
miniatures by the Rolin Master in Additional 25695. The linear clarity already
occurs here that will be present in the Horloge illuminations. Over the head of the
Old Testament prophet in David and Nathan are three gold-dusted columns that sup¬
port a Gothic canopy. One of the columns is a buttress type, with a projecting flange
at the summit, at mid-point and at the base of the plinth. This form of architectonic
support is, by all appearances, derived from anterior styles, yet, it is an element
adopted by the Rolin painter as his own. He employs it, for example, in the portrait
of an Abbot in London, British Library, MS Egerton 2019, f. 231. Another represen¬
tation of columns, this time animated and diminutive Gothic ones, complete with
slender lancets, supports a frieze surmounting the twin side structures of the pros¬
cenium arch in the Horloge representation of the The Repentant in his Cell (Fig¬
ure 30).

The stature of the Rolin figures in Additional 25695 is regular, but waists may
at times be rather long. Later, in the Horloge portraiture of Lechery and Chastity,
the artist will depict the Virtue as a tall lady with a short waist.16 The bodies of
Christ and the two malefactors in the The Crucifixion (Figure 28) of the London
book have firm outlines; the faces of the witnesses to the Passion have shaip, bold
chins with angular, chiselled jaws and cheeks.

The features of the Virgin and of the angel in the London The Annunciation
(Figure 23) lack the angular modelling that is salient in the figuration of the Horloge
pictures. The impression conveyed is one of refined softness, but this may be unin¬
tentional. Rubbing of the folios has perhaps softened the distinct linearity of the
artist’s hand. The visage of Mary in the London The Coronation of the Virgin (Fig¬
ure 25), on the other hand, is identical with that of Sapientia in the Tree of Life
(f. 20v) of the Brussels Horloge-, the hair shows a slight tendency to be less sculp¬
tured than its Horloge counterpart, especially where it cascades over the right
shoulder and falls down her side.17 Throughout the Rolin Master’s works, ears arc
round, somewhat inelegant, and feature two dots. The trait is exemplified in the
Pentecost miniature of the London manuscript. Also evident is the artist’s

This characterization had been customary for a generation or so among French illuminators of the
stature of the Rohan, Boucicaut and Bedford Masters. For examples executed in the Rohan workshop
see M. Meiss, French Painting in the Time of Jean de Berry. The Limbourgs and their Contem¬
poraries (London: 1974) П, Figures 855 and 872. For the Boucicaut Master and his atelier, see Meiss,
Boucicaut Master Figures 37 and 299. For the Bedford workshop, see the two articles by Spencer cited
in n. 4 above.