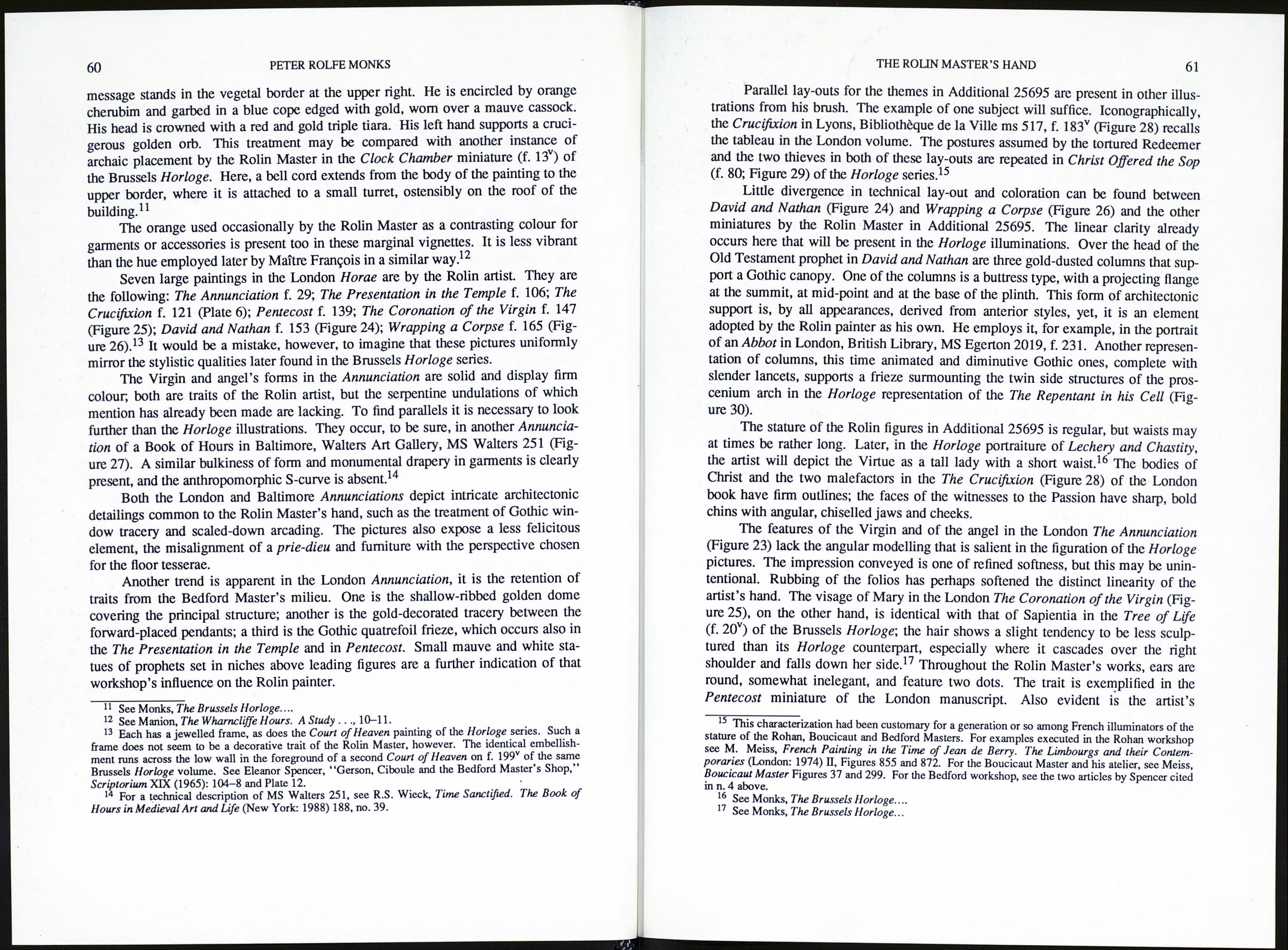 London Hours contains or mirrors the achievements of the Bedford Master in the
two imposing monuments preserved in the Salisbury Breviary (BN ms lat. 17294)
and in the Bedford Hours (BL MS Add. 18850).3 It is, furthermore, curious that
Spencer should announce a collaboration between the Bedford and Rolin painters for
Additional 25695. She acknowledged herself that the former’s hand remains
painterly even late in his career, that his hand fades from view at the time work was
suspended on the Salisbury Breviary c. 1435, and that his work cannot be confused
with that of the Rolin Master.4 Moreover, the floruit years for the Rolin artist are
c. 1435-1465, and these dates suggest that collaboration was highly unlikely. A
more plausible view is that the Rolin painter shared the decoration of the London
Hours with another illuminator, who may be called Hand B, and who had been
trained in the Bedford Master’s style.

Speaking about Pierpont Morgan Library MS M. 1027, Plummer observed,
“Most closely resembling our paintings are perhaps the ones by the Master in a
Vienna Horae of about the same size (Öst. Nationalbibi., Codex s.n. 13237) and a
larger one at London (BL Add. 25695). These two books contain some of his finest
paintings...”.6 Janet Backhouse offered no comment on the views of Spencer and
Plummer, nor on the number of hands in Additional 25695. She saw the volume’s
art work as, “...related stylistically to the work of the fashionable Maître
François...”.7 A relationship between the artistic approach of the Rolin Master and
that of Maître François had been noticed by Spencer many years ago. She believed
that the Rolin painter, “...may well have been the chief formative influence for the

As soon as the London Hours are opened at the text pages, evidence of two
hands at work strikes the viewer’s gaze. The difference in the glow and aura of the
matt gold staves which always frame the text on the reverse sides of the large minia¬
tures seems attributable to the individuality of two artists. The irregular staves on
the verso of the Rolin Master’s illustrations are duller than those for Hand B’s paint¬
ings. The concave stroke for the gilding at the cleft of the sapling is bland and indis¬
tinct for the Rolin artist but clear and bright for Hand B. On the other hand, little
personal whim is noticeable in the border decorations of the illuminated folios. It is

^ The volumes were consulted by me when I was recently in Paris and London. I am indebted to

the Manuscript curators for according me permission to handle them.

5 See P.R. Monks, “A Study of the Art Work of the Rolin Master in the Horloge de Sapience,
Brussels, Bibliothèque Royale, ms IV. Ill and of his other known surviving Works”, diss., Melbourne

6 See J. Plummer (with the assistance of G. Clark), The Last Flowering. French Painting in

8 Spencer, Horloge, 296. Remarks made by me in this paper about elements of the Maître François

style are derived from the same article by Spencer, and from Margaret M. Manion The Wharncliffe
Hours. A Study of a Fifteenth-Century Prayer-book (Canberra: 1972) and The Wharncliffe Hours.

of a bold and vigorous kind, featuring flowers, acanthus leaves and assorted berries
in red and blue. Other folios almost invariably display pink and white or mauve and
white acanthus, liberally highlighted with gold. The plants on the verso of a folio
are reversed images of those on the recto side.

Viewed broadly, the artistic interpretation in the London book’s twenty-four
Calendar vignettes, the historiated initials and the sixteen large miniatures recalls
Parisian atelier methods popular between the first and third quarters of the fifteenth
century. It was derived mainly from the Boucicaut and Bedford Masters’ styles.9
The same folios, however, present specific traits which point to the presence of the
Rolin Master. Both the firm vertical folds of a table-cloth in the January interior
and a boldly designed Greek palmette configuration overpainted in gold on a dark
red background in the Libra scene resemble closely their multiple counterparts in the
Horloge series of miniatures.10 Again, the finely modelled face within circumscribed
lines, and the fluffy hair-ends of the subject in St. John on Patmos are characteristics
associated with the Rolin painter’s skills. By contrast figures in the Zodiac Signs
and Labours of the Months are quite doll-like, particularly the female ones. None
has the S-curve and sway which the Rolin Master lends to his statuesque forms.

Almost every page of Additional 25695 has at least one illuminated or histori¬
ated initial, with many carrying four or five, as well as elaborate and delicately exe¬
cuted line-endings in mauve and white. They feature butterflies, snails, birds,
insects or human faces. Of particular interest is a capital D on f. 33 that is in the
Rolin style. It displays a bust of a young woman who wears a blue truncated hat
with gold and black trimmings; a small loop of black cloth rests on her forehead, and
a white veil streams from the crown of the hat. A minute section of a blue and
white, off-the-shouldcr gown is just visible. Both garment and head covering belong
to French fashion of the mid-fifteenth century. Other historiated initials bear witness
to the Rolin artist’s participation in their execution. For example, on folios 32v, 34,
38 and 39, within an О, V, D and C, respectively, appears the head of a man wearing
a brown beaver fur and blue hat, identical with the models worn by Daniel and other
men in the Susanna miniature of the Horloge series. Even more apposite is the war¬
rior presented in the N on f. 109v. He is clad in bluish-grey armour, the helmet and
shoulders of which accord with the armour on the young Amalekite who severs
Saul’s head in the Horloge painting known as the Death of Saul.

Elements of the Rolin Master’s hand are also evident in the vignettes which
decorate the borders of certain folios. In keeping with his eclectic style, archaisms
are not uncommon. They are possibly derived from Bedford trends. One particular
form this takes is the positioning outside the frame of the miniature a person or
object related to the sequence of events of the pictorial narrative. In the Annuncia¬
tion, for example (f. 129; Figure 23), God the Father, the source of Gabriel’s

9 For these two styles, see M. Meiss, French Painting in the Time of Jean de Berry. The Boucicaut
Master (New York: 1968) passim and the two papers by Spencer cited in n. 4 above.

See P.R. Monks, The Brussels Horloge de Sapience. Iconography and Text of the Brussels,
Bibliothèque Royale, ms IV. Ill (Leiden: 1989) chap. 5, and the plates which reproduce all the minia¬
tures.