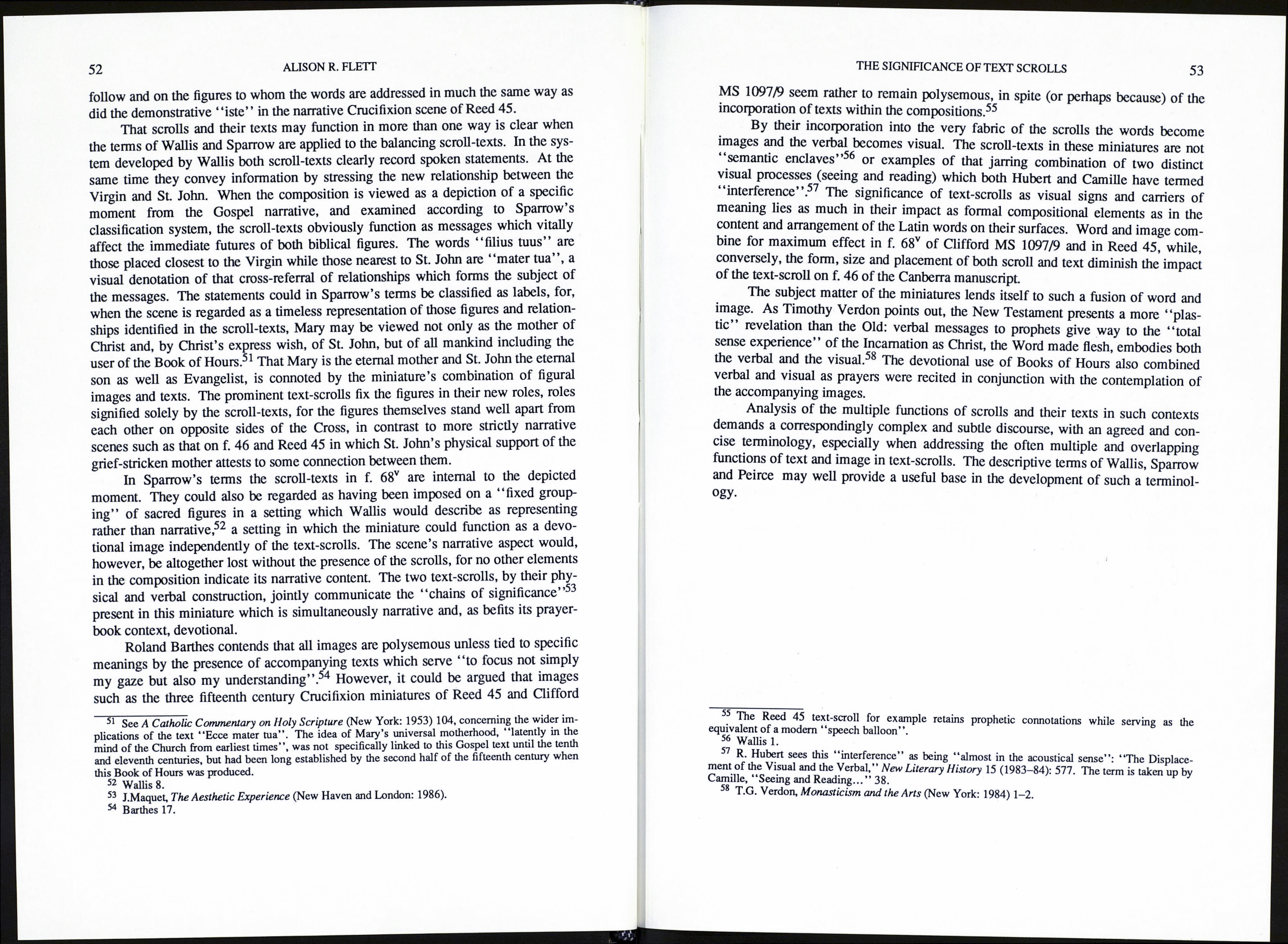 impact of the profession of faith is nonetheless far less forceful in this miniature.
The text-scroll lacks the visual “weight” of many others found in the same
manuscript including those in the Crucifixion miniature on f. 68v (Figure 22). It is
merely a slender band of uniform width which extends in a shallow arc above the
head of the speaker, passes behind the soldier’s upright lance and terminates in a sin¬
gle line which merges confusingly with the line of a path on the hillside. The
insignificant form of the scroll, which seems almost to have been added as an aft¬
erthought, raises a number of questions. For example, could the scroll have been
accidentally or deliberately omitted in the first instance and added later, or could the
artist have used as model a Crucifixion scene which lacked a scroll?43

The role of the text and scroll combination in the internal structuring processes
by which the meaning of this scene is conveyed is however a quite separate issue.
Its impact on the reader/viewer is very different from that of the Reed 45 text-scroll.
The text here is, firstly, very easy to read, despite the fact that its clear and even
letters are proportionately smaller than those in the Dunedin miniature, where the
viewer’s point of view is controlled by the exigencies of an elaborate upwardly curv¬
ing vehicle. Here there are no such problems: the text may be assimilated in a single
glance as the eye follows the scroll’s progress from left to right. Paradoxically the
significance of the scroll-text within the composition is diminished precisely because
it is so readable. It does not startle or focus the attention on either the Centurion or
Christ. Its force as an indexical sign is lost.

Using the descriptive terms of Wallis and Sparrow, this scroll-text, like the
Reed 45 scroll-text, appears in a narrative context and is internal to the historical
event depicted. It records the Centurion’s spoken statement, conveys information
about Christ (although the placement of this scroll makes the connection between its
content and the actual figure of Christ far less obvious) and so functions simultane¬
ously as label and message.

The less obviously narrative Crucifixion miniature on f. 68v of the same
manuscript (Figure 22) prefaces the text for the devotion of the Seven Last
Words”, the seven statements made by Christ from the Cross,44 in that section of
the prayer-book containing “hymns and devotions, including texts in honour of the
Virgin and the Passion” and includes two prominent curling text-scrolls on which

two of the statements are displayed.45

The initial impression (modified when the text-scrolls are examined more
closely) is that sacred history is not so much being narrated as celebrated.4
Although set in a landscape similar to that of f. 46 (Figure 21), the figures of the Vir¬
gin and St. John here flank the Cross in those formal standing poses which to Wallis

43 Conversely the model could have included a scroll held in the Centurion s right hand which now
disappears behind the wood of the Cross, a scroll which would not fit when the figure was transposed
from a larger to a smaller compositional format.

signify the removal of such sacred persons and their inscribed statements from their
historical narrative setting to an atemporal representing context.47 The timeless qual¬
ity of this scene is reinforced by the gesture of the figure of St. John who extends
towards the Cross the sacred codex of his own account of the complete Gospel narra¬
tive, an account which includes the moment here shown. The dominant impression
of a symmetrical pattern is reinforced by the reversed forms of the miniature’s text-
scrolls. Originating on either side of Christ’s upper torso, the scrolls follow the lines
of the outstretched arms and billow down into large open curves over the heads of
the figures below before curling back towards their source to form reversed and dis¬
tinctively shaped “key hole” configurations of the type so often found in this
manuscript.48 The curving white scrolls are highlighted against the plain expanse of
colour which fills the upper half of the miniature and which is decorated with curvi¬
linear slender golden branches and repeated motifs of tiny golden hooks and curls.49

When the figures and text-scroll are considered together, however, the presence
of a historical narrative is revealed, for the texts are taken from the Gospel of St.
John and record the statements by which the crucified Christ commended his mother
and his disciple to each other’s care: “Mulier ecce filius tuus...Ecce mater tua”
(John 19: 26). These words could be said to produce an active response on the part
of the figures. The Virgin crosses her arms on her breast in that gesture of
acceptance—so often found in scenes of the Annunciation and in f. 46—while St.
John, offering his codex with outstretched arms, appears to dedicate to Christ not
only his account of Gospel events but his entire being and future.

At the same time the scroll-texts reinforce what Wallis would term the pre¬
valent representing mode of the scene. Just as the shapes of the scrolls balance each
other, so the structure of their textual content and the disposition of that content
along the lengths of the scrolls add to the dominant patterning effect. Two of the
four words of each scroll-text are, from the reader’s point of view, upside down, and
the process of perceiving the construction and meaning of the two short statements is
not simple. This contrasts strikingly with the easily readable scroll-text of f. 46.
Balance and repetition are here actually imposed on the grammatical construction of
the scroll-texts, for the name Johannes has been inserted before the scriptural words
of Christ to St. John. The construction of the second statement is in this way made
identical to that of the first which begins with the naming word “Mater”.50 The
repetition of the emphatic “Ecce”, present in both statements, confirms the role of
the texts as indexical signs. It commends and draws attention to the words which

Such patterned skies are however also routinely found in obviously narrative miniatures such
as that of the nailing of Christ to the Cross on f. 65 v, Figure 115, Manion and Vines 125. The
manuscript also includes many examples of what have been termed by Manion and Vines “outmoded
diapered grounds” (133), as in the miniature depicting the martyrdom of St. Thomas A’Becket on f 6
Figure 113, (p. 125).

fi fi ppt known whose decision is was to add the word to the biblical text, for the roles and
responsibilities of text artists in relation to those of miniaturists and others responsible for the produc¬
tion of such prayer-books are not yet fully understood.