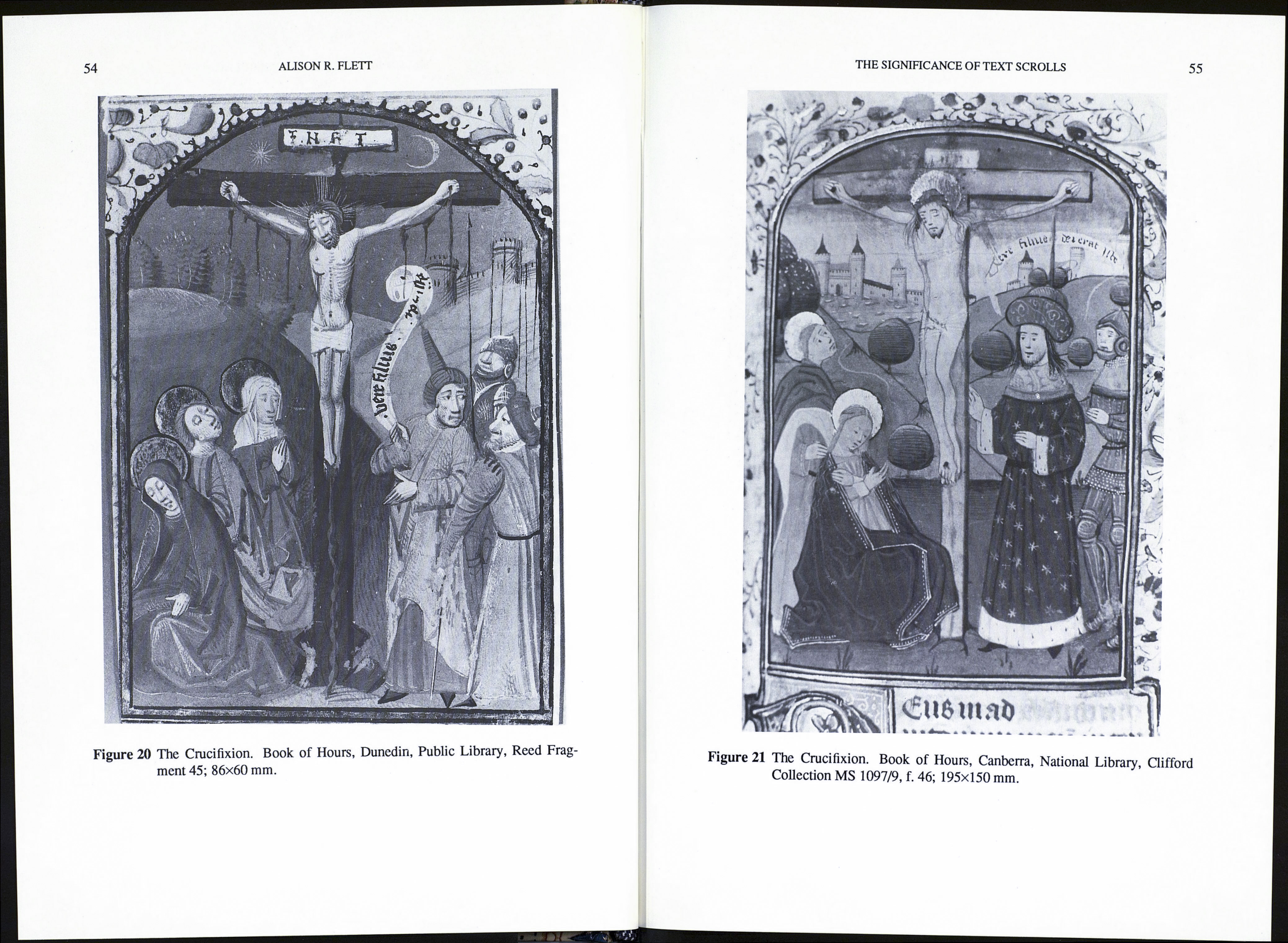 follow and on the figures to whom the words are addressed in much the same way as
did the demonstrative “iste” in the narrative Crucifixion scene of Reed 45.

That scrolls and their texts may function in more than one way is clear when
the terms of Wallis and Sparrow are applied to the balancing scroll-texts. In the sys¬
tem developed by Wallis both scroll-texts clearly record spoken statements. At the
same time they convey information by stressing the new relationship between the
Virgin and St. John. When the composition is viewed as a depiction of a specific
moment from the Gospel narrative, and examined according to Sparrow’s
classification system, the scroll-texts obviously function as messages which vitally
affect the immediate futures of both biblical figures. The words “filius tuus” are
those placed closest to the Virgin while those nearest to St. John are “mater tua”, a
visual denotation of that cross-referral of relationships which forms the subject of
the messages. The statements could in Sparrow’s terms be classified as labels, for,
when the scene is regarded as a timeless representation of those figures and relation¬
ships identified in the scroll-texts, Mary may be viewed not only as the mother of
Christ and, by Christ’s express wish, of St. John, but of all mankind including the
user of the Book of Hours.51 That Mary is the eternal mother and St. John the eternal
son as well as Evangelist, is connoted by the miniature’s combination of figurai
images and texts. The prominent text-scrolls fix the figures in their new roles, roles
signified solely by the scroll-texts, for the figures themselves stand well apart from
each other on opposite sides of the Cross, in contrast to more strictly narrative
scenes such as that on f. 46 and Reed 45 in which St. John’s physical support of the
grief-stricken mother attests to some connection between them.

In Sparrow’s terms the scroll-texts in f. 68v are internal to the depicted
moment. They could also be regarded as having been imposed on a “fixed group¬
ing” of sacred figures in a setting which Wallis would describe as representing
rather than narrative,52 a setting in which the miniature could function as a devo¬
tional image independently of the text-scrolls. The scene’s narrative aspect would,
however, be altogether lost without the presence of the scrolls, for no other elements
in the composition indicate its narrative content. The two text-scrolls, by their phy¬
sical and verbal construction, jointly communicate the “chains of significance 53
present in this miniature which is simultaneously narrative and, as befits its prayer-
book context, devotional.

Roland Barthes contends that all images are polysemous unless tied to specific
meanings by the presence of accompanying texts which serve to focus not simply
my gaze but also my understanding”.54 However, it could be argued that images
such as the three fifteenth century Crucifixion miniatures of Reed 45 and Clifford

51 See A Catholic Commentary on Holy Scripture (New York: 1953) 104, concerning the wider im¬
plications of the text “Ecce mater tua”. The idea of Mary’s universal motherhood, “latently in the
mind of the Church from earliest times”, was not specifically linked to this Gospel text until the tenth
and eleventh centuries, but had been long established by the second half of the fifteenth century when
this Book of Hours was produced.

MS 1097/9 seem rather to remain polysemous, in spite (or perhaps because) of the
incorporation of texts within the compositions.55

By their incorporation into the very fabric of the scrolls the words become
images and the verbal becomes visual. The scroll-texts in these miniatures are not
semantic enclaves”56 or examples of that jarring combination of two distinct
visual processes (seeing and reading) which both Hubert and Camille have termed
interference 57 The significance of text-scrolls as visual signs and carriers of
meaning lies as much in their impact as formal compositional elements as in the
content and arrangement of the Latin words on their surfaces. Word and image com¬
bine for maximum effect in f. 68v of Clifford MS 1097/9 and in Reed 45, while,
conversely, the form, size and placement of both scroll and text diminish the impact
of the text-scroll on f. 46 of the Canberra manuscript.

The subject matter of the miniatures lends itself to such a fusion of word and
image. As Timothy Verdón points out, the New Testament presents a more “plas¬
tic” revelation than the Old: verbal messages to prophets give way to the “total
sense experience of the Incarnation as Christ, the Word made flesh, embodies both
the verbal and the visual.58 The devotional use of Books of Hours also combined
verbal and visual as prayers were recited in conjunction with the contemplation of
the accompanying images.

Analysis of the multiple functions of scrolls and their texts in such contexts
demands a correspondingly complex and subtle discourse, with an agreed and con¬
cise terminology, especially when addressing the often multiple and overlapping
functions of text and image in text-scrolls. The descriptive terms of Wallis, Sparrow
and Peirce may well provide a useful base in the development of such a terminol¬
ogy.

55 The Reed 45 text-scroll for example retains prophetic connotations while serving as the
equivalent of a modem ‘ ‘ speech balloon ”.