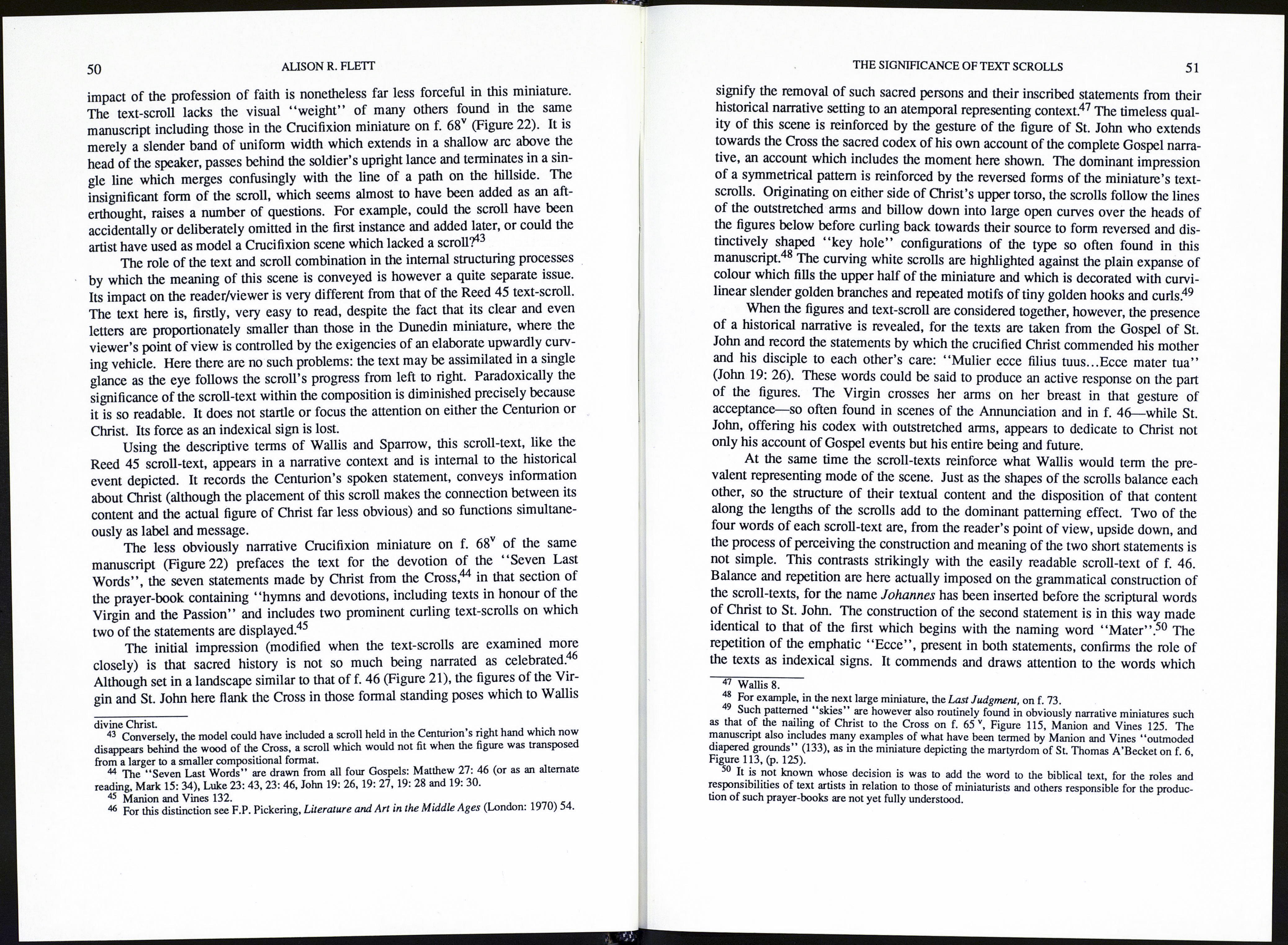 The Reed 45 scroll-text may then also be placed in the first of Wallis’s
categories, that of texts which convey information about the figures with which they
are connected, either by identifying them or concentrating on a single feature or life
event. It also conveys information about Christ by alluding to his filial relationship
to God the Father and, indirectly, to his Death, the circumstances of which prompted
the Centurion’s cry.

John Sparrow, in an alternative system of classification based on a series of
paired oppositions, distinguishes between inscriptions which function as labels and
those which act as messages. According to their context he then judges them to have
either an internal or imposed relationship to the other elements of the images in
which they appear.28 The Reed 45 scroU-text would be classified by Sparrow as hav¬
ing an internal relationship to its context, for it has not been imposed on its setting
but is part of the Gospel Crucifixion narrative. Although the scroll-text presents an
emphatic statement it would also be regarded as a label rather than as a message: the
similarly emphatic Annunciation text of Gabriel’s greeting to the Virgin, is classified
as label by Sparrow 29 That such familiar and routinely expressed texts are desig¬
nated labels shows that in Sparrow’s system they are regarded as having similar
characteristics to those physical attributes which often appear in conjunction with
certain sacred figures. A statement may therefore be regarded as an attribute, just as
a scroll (with or without a scroll-text) may also serve on occasion as an attribute, one
which, moreover, often has prophetic overtones.-’"

Sparrow also discusses the processes of connotation and denotation which he
connects with such labels and in both of which the Reed 45 scroll-text participates.
He does not regard these processes as mutually exclusive but insists, as does the
semiotician Roland Barthes,32 that they occur simultaneously. As Sparrow explains:
“Sometimes the label, in the very act of identifying, may intensify for the spectator
echoes and associations already evoked by the representation; the label may
connote...as well as denote”.33 The process of connotation therefore assumes a
degree of prior knowledge and understanding which enables the viewer to grasp the
significance of relevant associations and attributes. The Reed 45 scroll-text denotes
the spoken statement, made at the site of the narrative Gospel action but at the same
time it connotes additional associations and attributes of the figures concerned which
are recognised as meaningful by the viewer, namely the dual nature and eternal
divinity of Christ and, in the case of the Centurion/scroll combination, the potential
role of that figure as witness in the prophetic tradition.34

34 Scroll-bearing prophets in Crucifixion scenes bore witness to the fulfilment of Old Testament
prophecies concerning the coming of the Messiah and his subsequent treatment. An example is found
in the late thirteenth century Psalter of Yolande de Soissons, Pierpont Morgan Library MS M. 729, dis¬
cussed by E. Panofsky in Early Netherlandish Painting (New York: 1971) 1.40. Such scroll-bearing

The significance of the text-scroll in the Dunedin Crucifixion miniature may
also be evaluated according to the specialist terminology of semiotics, that general
theory of signs which “deals with meanings and messages in all their forms and in
all their contexts”35 and whose terminology “seeks to describe the underlying sys¬
tems of conventions that enable objects and activities to have meaning”.3^ If the
Peircean definition of sign as anything which “stands to somebody for something in
some respect or capacity” is adopted,37 both scroll and text may be seen as mean¬
ingful signs and classified as icon, index or symbol according to the nature of their
relationship to those things for which they stand.38 In the Reed 45 miniature the
scroll-text combination functions primarily as index. It startles the viewer and
focuses the attention of the reader on the scroll as physical object by the contrast it
presents between the angular black lettering of the text and the arresting curvilinear
scroll form.

Attention is next drawn to the meaning of the text by its use of the demonsra-
tive pronoun iste” to signify its object, the figure of Christ near which it is placed.
This connection is made not by a process of signification based on physical resem¬
blance (as would be the case for an icon) or convention (as for a symbol) but by an
existential link “embodied and actuated” in part of the text itself,39 namely in the
demonstrative pronoun, for such pronouns “call upon the hearer to use his powers of
observation, and so establish a real connection between his mind and the object”.40
The scroll-text is indexical in a non-reflexive way: it directs attention primarily to its
object, the figure of Christ on the Cross, and only secondarily to its source, the figure
of the Centurion. The Crucifixion miniatures in Clifford Collection MS 1097/9 also
contain text-scrolls and an assessment of their significance is similarly aided by
employing the concise descriptive terms of Wallis, Sparrow and Peircean semiotics.

The miniature on f. 46 (Figure 21) prefaces the text for None in the Hours of
the Cross and illustrates the same moment from the Gospel narrative as Reed 45.41
It also includes the same text from St. Matthew’s Gospel, here presented on a text-
scroll placed over the imposing and richly dressed figure of the Centurion.42 The

prophets also appeared as witnesses to the Christian faith in medieval dramatic presentations such as
the Ordo or Processio Prophetarum (performed in conjunction with the Christmas liturgy) in which
they have been described by P. Axton, European Drama in the Early Middle Ages (London: 1974) as
icons, pointing to Quist” (72). They also appeared in Easter plays from the late twelfth to early six¬
teenth centuries, as discussed by O.B. Hardison, Christian Rite and Christian Drama in the Middle
Ages (Baltimore: 1965) 283, and A.M. Nagler, The Medieval Religious Stage, trans. C. Schoolfield
(Newhaven and London: 1976) 70.

41 In this manuscript a short version of the Hours of the Cross is inserted at the end of each of the
Hours of the Virgin; see Manion and Vines 132.

The Centurion in the Reed 45 fragment is presented as a simply attired layman, not as a Roman
military official. Here the figure is more splendidly dressed, again wearing civilian clothing. The lay
viewer/reader may, as a result of this portrayal, have identified more closely with the figure, leading in
turn to a closer connection with the scroll-text as a personal reaffirmation of faith in the crucified yet