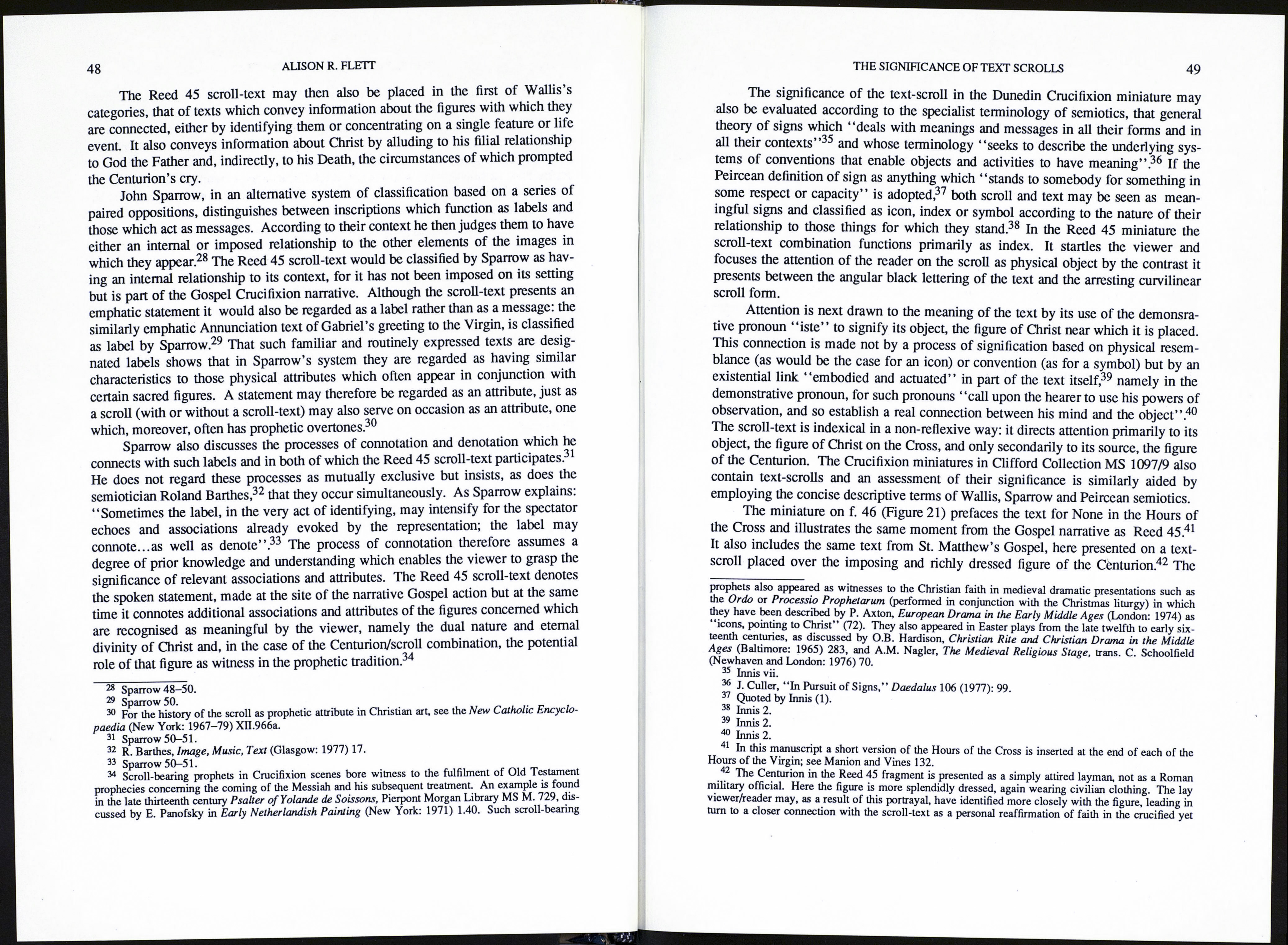 powerfully conveyed in the first instance by the structure of the biblical text itself:
the impact of the adverb “Vere” at the beginning of the exclamation is reinforced
by the complementary placement of the demonstrative pronoun “iste” at its conclu¬
sion. The user of the prayer-book is challenged to make the mental connection
between the visible word “iste” and its object, the visible crucified body of the
human Christ, whose image is embedded at the heart of the composition just as the
words asserting his divinity, “filius dei erat”, are embedded at the heart of the
scroll-text.16

The significance of the text is conveyed not only through the reception of its
individual words and phrases and by the recognition of its unique Gospel source, but
also by its appearance on the surface of the scroll. The flat shapes of the black
Gothic letters are highly visible against the white ground of the three dimensional
scroll in a dynamic mix of the second and third dimensions. The impact of this text
and scroll combination is intensified by the effort involved in identifying and recog¬
nizing the sequence of its Latin words:17 these cannot be read horizontally from left
to right as the scroll, their vehicle, leaps up energetically into the space between the
Cross and the standing figure of the Centurion. The eye must travel upwards along
the length of the scroll which begins in the Centurion’s hand and terminates near the
figure of Christ. There must also be a sideways orientation as the letters of the
scroll-text are not placed one above the other but retain their conventional side by
side, left to right arrangement. In their Gospel context the words of the exclamation
seem to be addressed by the members of the group to each other,18 and in this minia¬
ture the figure of the Centurion does turn towards the other figures on the right. The
scroll however has its own orientation: it does not turn away from the picture plane
but towards it, presenting its exclamatory contents to the user of the prayer-book

and, by extension, to all mankind.

Although scroll and text here contribute equally to the impact of the text-scroll,
the classificatory system developed by Wallis makes no acknowledgement of such
interdependence. Wallis in fact makes no mention of the objects or surfaces on
which painted texts appear, defining every such text as a “semantic enclave, which
consists of signs of a different kind or from a difference system than the signs in
which the main body of that work of art consists”.1^ His system for classifying
painted inscriptions according to functional type is nevertheless invaluable when
attempting to describe and assess the Reed 45 combination of text and scroll.

16 This devotional exercise is entirely consistent with the miniature’s position before the text for the
hour of None in the Hours of the Cross. The placement of the fragment is given in the sale catalogue

19 Wallis 1. Sparrow distinguishes, however, between what he sees as the potential difficulties of
the modem spectator and the response to such composite images of a fifteenth century viewer who
“evidently found no difficulty...in looking with one eye while he read with the other” (48).

Wallis distinguishes between four groups of inscriptions: those which convey
information about the figures depicted; texts which present statements made by
sacred figures; texts which show invocations to such figures by spectators who are
themselves depicted in the compositions; and, finally, inscriptions which record the
comments of artists.20 As the Reed 45 scroll-text presents a “speech-act”, it belongs
to the second category.21 Wallis subdivides this group according to temporal con¬
text, differentiating between what he terms narrative and representing modes.
Specified moments in the lives of the holy figures are depicted in the former, while
in the latter the figures are shown statically and outside of the normal time frame “at
an unspecified moment of their existence”.22 Sometimes the distinction is unclear as
when, for example, a representation of a temporal episode is “petrified” into a fixed
figurai arrangement, making the image more devotional than narrative.23

The Reed 45 scroll-text functions in both modes. The discourse of Gospel-
based Christianity is, as Michael Camille points out,24 essentially narrative in
nature, and is based upon such reported statements as this exclamation from St.
Matthew’s Gospel, here literally presented to the viewer on a scroll.25

In supplementary processes of signification involving the Centurion figure and
the figure of Christ the scroll-text functions simultaneously in the representing mode
as defined by Wallis. The juxtaposition of the hanging static body of the crucified
Christ and the insistently upward curling scroll with its declaration of the eternal
truth of Christ’s divinity distances the iconic figure from its temporal context and
enables it to stand alone as a summa of Christian doctrine.

Wallis also claims that in a representing setting a spoken statement acts as the
leitmotif of the figure with whom it is associated, and states briefly “that person’s
role in the history of the world”.26 According to these criteria the Centurion’s cry of
faith may be regarded as his leitmotif and its utterance as his principal contribution
to world history: it actually embodies the most important event in the life of that
figure, an unnamed and problematic character not mentioned elsewhere in the canon¬
ical books of the Bible.27

21 The term is used by Camille (“The Book of Signs...”) to describe “many of the scrolls and in¬
scriptions in medieval pictures” (143).

25 The statement is also represented in the composition by the presence of the figures who partici¬
pate in that moment of the narrative action in which the statement was made. See S. Alpers, The Art of
Describing (Chicago: 1983) 236, for this distinction between pictorial presentation and representation.

27 The life of the Centurion after the Crucifixion was however described in some detail in medieval
devotional literature and apocryphal texts with wide currency. The Centurion was also often conflated
with the figure commonly known as “Longinus” whose lance pierced the side of the dead Christ. See,
for example, The Golden Legend of Jacobus de Voragine eds. G. Ryan and H. Ripperger (New York:
1941, repr. 1960) 191, and “The Letter of Pilate to Herod”, referred to in The Apocryphal New Testa¬
ment ed. M.R. James (Oxford: 1924, repr. 1960) 155. For a discussion of this conflation in Eastern and
Western Art see Schiller П.153-155.