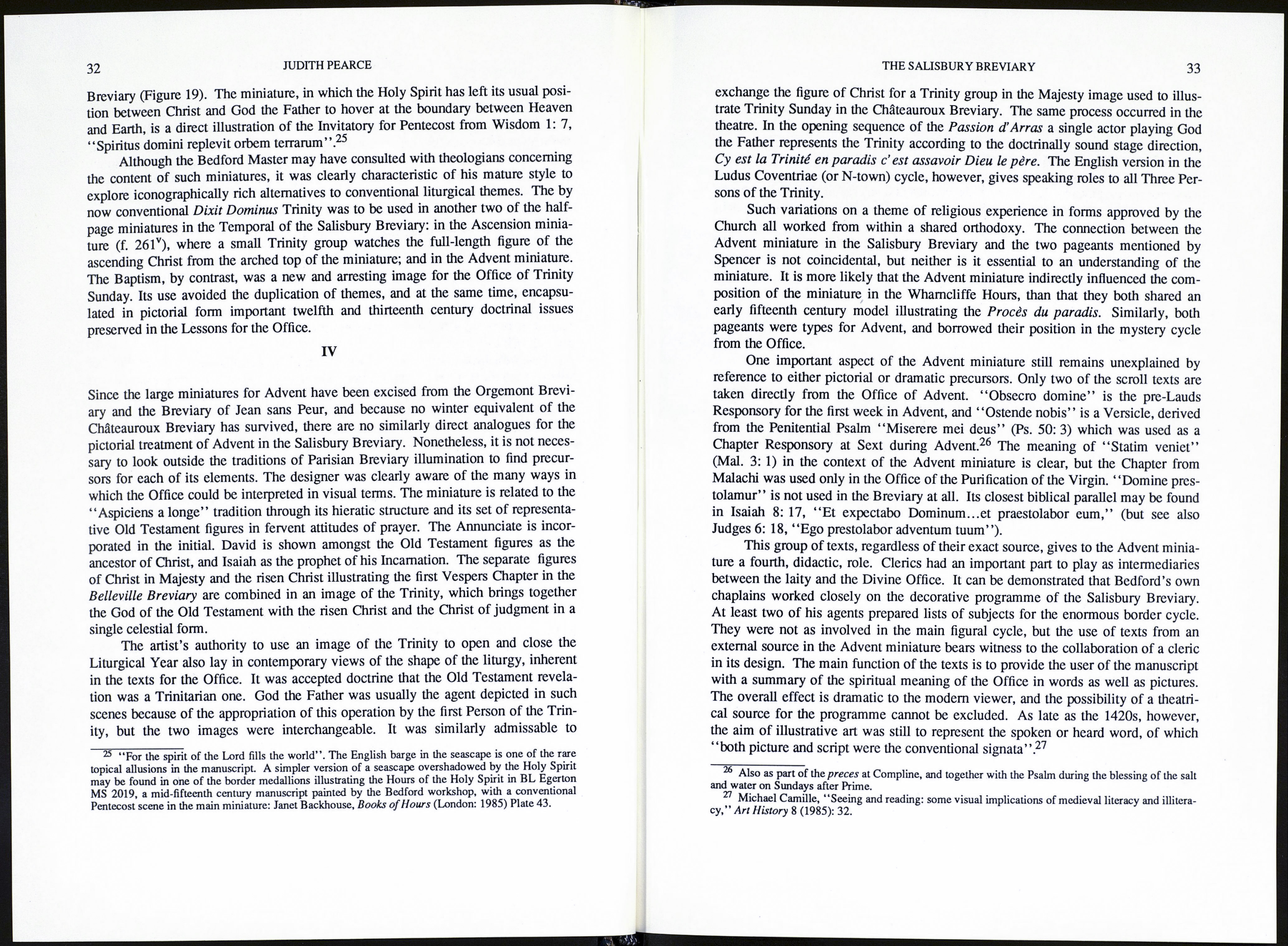 The decorative programme of the Salisbury Breviary is exceptional in many regards,
not excluding its four border miniatures on each folio and an unprecedented number
of half-page miniatures.16 Bedford’s generous patronage had encouraged the
workshop to treat the project in the experimental manner of a luxury Book of Hours
rather than as a liturgical manuscript. Despite this, the figurai cycle of the text relies
iconographically on traditional approaches to the illustration of the Breviary. The
innovations are those one might expect from the work of the Bedford Master and his
assistants: complex exposition of the theme and, particularly in the large miniatures,
the inclusion of rich narrative detail.17

The Easter Sunday miniature of The Three Maries at the Tomb (Figure 16) is a
case in point. The standard fourteenth and early fifteenth century theme for Easter
Sunday was that of the Resurrection, the feast being celebrated by the Office, but
there are a number of precedents for its subordination to the closely related scene of
The Three Maries at the Tomb under the influence of the first Lesson Gospel
extract.18 In the Salisbury Breviary, the artist used the theme predicated by the
emphasized text, but added subsidiary figures in the style of the Master of Flémalle.
He also included the risen Christ within the larger pictorial space, thus illustrating in
visionary form the words, “Nolite timere...Surrexit...Non est hic” (Matt. 28:5),
spoken by the angel to the Three Maries, and given in contracted form in the scroll.

The use of the half-page format to develop the theme of the feast also informs
the miniature for Trinity Sunday (Figure 17), in spite of its surprising subject. The
Baptism of Christ rarely appears in Breviary cycles.19 Its association with the Trin¬
ity, however, was firmly fixed by St Augustine, who grouped the voice of God the
Father and the descent of the Holy Spirit in the form of a dove with the Incarnation
and Pentecost as appropriations of the individual Persons of the Trinity.20 Although

17 The Bedford Master was responsible for the design of most of the half-page miniatures in the
Temporal, although he had a major hand in only four: the Baptism miniature and the Advent, Nativity
and Epiphany miniatures. The rest were completed by Spencer s Hand B, Salisbury Breviary,

20 St Augustine, De Trinitate, I, 4. The nine-miniature pictorial sequence on St Augustine’s doctrine
of the Trinity illustrating the memorial to the Trinity in the Sobieski Hours (f. 203) includes a much re¬
duced version of the Baptism in the Salisbury Breviary; Eleanor Spencer, The Sobieski Hours, a
Manuscript in the Royal Library at Windsor Castle (London: 1977).

the use of the theme in the Salisbury Breviary has no direct textual licence from the
Antiphon itself, the Baptism is used in the fifth Lesson as the central proof of a scho¬
lastic sermon on the doctrine of appropriation, which seeks to reconcile the problem
of how the Three Persons of the coequal Trinity may each have individual charac¬
teristics:

The Bedford Master had already experimented with the miniature for Trinity
Sunday in the Châteauroux Breviary (Plate 1), a summer Breviary possibly made for
the Dauphin, Louis de Guyenne, before his death in December 1415.22 For the
Châteauroux Breviary, he used the Dixit Dominus form, but gave the three members
of the Trinity the celestial framework of a Christ in Majesty image. This combina¬
tion had been used by artists to illustrate the memorial of the Trinity in manuscripts
like the Très Belles Heures de Notre DameP The Bedford Master modified the
model to the demands of the Breviary text, however, by adding a cross to accentuate
the physical reunion of the Trinity in Heaven after the Ascension of Christ.

The miniature for the same Office in the Bedford Hours (Figure 18), painted by
the Master some four years later, is a confident variant of the theme, in which the
Dixit Dominus image is used to comment on the transubstantiation issue in the con¬
text of an extended version of the Trinitas creator mundi,24 It was a design of this
nature which inspired the extraordinary Pentecost miniature in the Salisbury

21 “However, certain operations of God may be particularly suitable to certain Persons, just as the
voice which spoke from Heaven over the baptized Christ was to the Father: and only to the person of
the Son belongs the taking on of humanity, and to the person particularly of the Holy Spirit
corresponds the dove in which form the same Holy Spirit descended upon the same Son of God as he
was being baptized in human form: nevertheless, without any doubt, that voice and that dove and the
humanity of Christ are the operations of the whole Trinity whose works are inseparable”. I have not
been able to trace the source of the Lesson, but it echoes thirteenth century conclusions on this issue:
see, in particular, Aquinas, Summa Theologia, I, QQ xliii, 7; and also Bertrand Margerie, La Trinité
Chrétienne dans l'histoire. Théologie Historique 31 (Paris: 1975).

22 The Dauphin s arms appear on f. 430. There were three dauphins during the reign of Charles I:
Louis, the eldest; Jean de France, who was Dauphin for only five months; and the future Charles П,
who was in exile after 1418. Louis, although not yet nineteen when he died, was a connoisseur of art
and spent large sums of money on the furnishings of his private chapel: Leopold Pannier, Les Joyaux
du duc de Guyenne, Extrait de la Revue Archéologique (Paris: 1873) 8.

24 Janet Backhouse dates the Bedford Hours (BL Add. MS 18850) to 1419, demonstrating with
strong supporting evidence that the manuscript was commissioned by Philippe le Bon after the death of
his father in that year. Bedford’s armorials were added at a later date: “A reappraisal of the Bedford
Hours,” British Library Journal 7 (1981): 47-49.