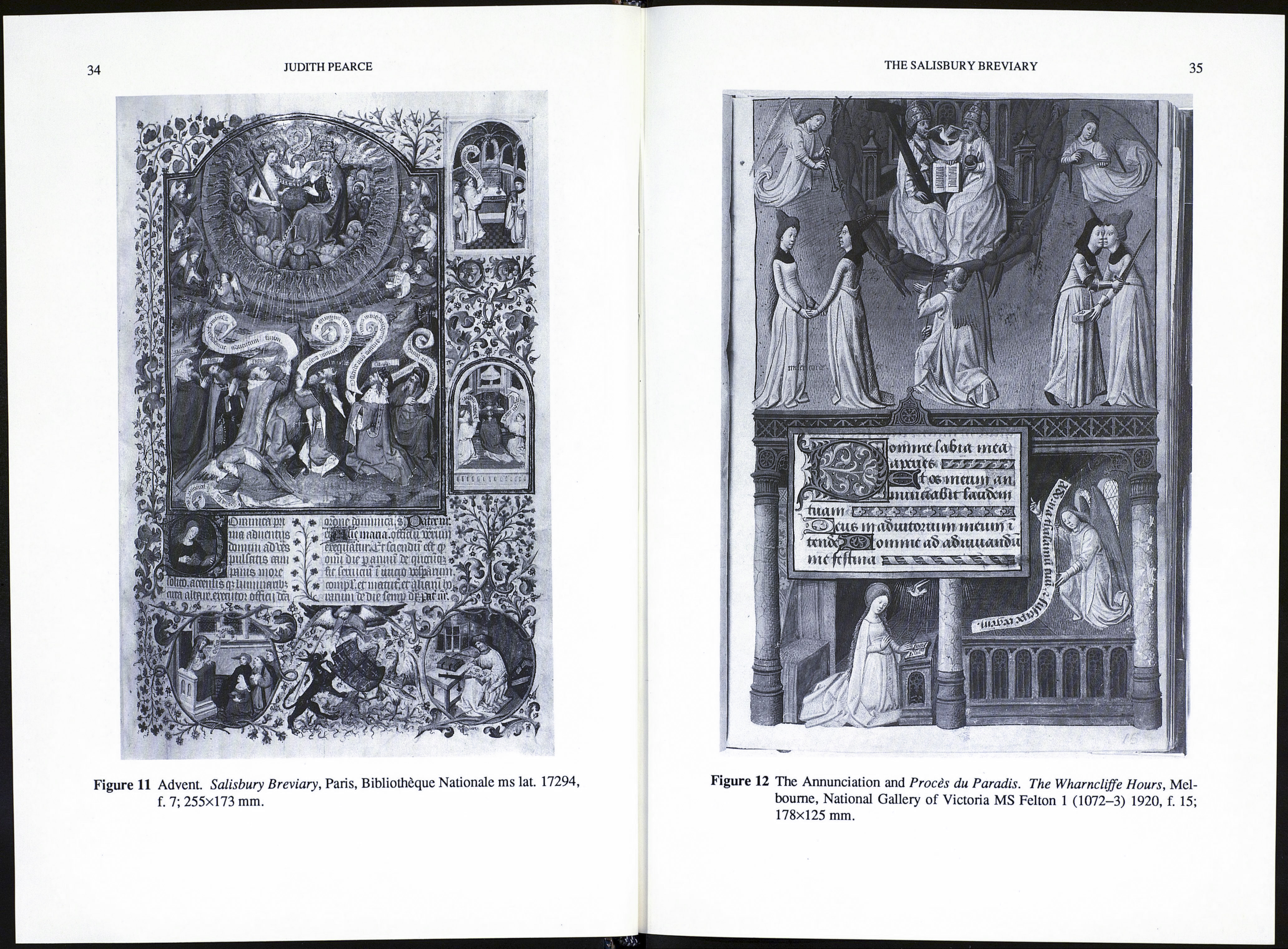 Breviary (Figure 19). The miniature, in which the Holy Spirit has left its usual posi¬
tion between Christ and God the Father to hover at the boundary between Heaven
and Earth, is a direct illustration of the Invitatory for Pentecost from Wisdom 1:7,
“Spiritus domini replevit orbem terrarum”.25

Although the Bedford Master may have consulted with theologians concerning
the content of such miniatures, it was clearly characteristic of his mature style to
explore iconographically rich alternatives to conventional liturgical themes. The by
now conventional Dixit Dominus Trinity was to be used in another two of the half¬
page miniatures in the Temporal of the Salisbury Breviary: in the Ascension minia¬
ture (f. 26lv), where a small Trinity group watches the full-length figure of the
ascending Christ from the arched top of the miniature; and in the Advent miniature.
The Baptism, by contrast, was a new and arresting image for the Office of Trinity
Sunday. Its use avoided the duplication of themes, and at the same time, encapsu¬
lated in pictorial form important twelfth and thirteenth century doctrinal issues
preserved in the Lessons for the Office.

Since the large miniatures for Advent have been excised from the Orgcmont Brevi¬
ary and the Breviary of Jean sans Peur, and because no winter equivalent of the
Châteauroux Breviary has survived, there are no similarly direct analogues for the
pictorial treatment of Advent in the Salisbury Breviary. Nonetheless, it is not neces¬
sary to look outside the traditions of Parisian Breviary illumination to find precur¬
sors for each of its elements. The designer was clearly aware of the many ways in
which the Office could be interpreted in visual terms. The miniature is related to the
“Aspiciens a longe” tradition through its hieratic structure and its set of representa¬
tive Old Testament figures in fervent attitudes of prayer. The Annunciate is incor¬
porated in the initial. David is shown amongst the Old Testament figures as the
ancestor of Christ, and Isaiah as the prophet of his Incarnation. The separate figures
of Christ in Majesty and the risen Christ illustrating the first Vespers Chapter in the
Belleville Breviary are combined in an image of the Trinity, which brings together
the God of the Old Testament with the risen Christ and the Christ of judgment in a
single celestial form.

The artist’s authority to use an image of the Trinity to open and close the
Liturgical Year also lay in contemporary views of the shape of the liturgy, inherent
in the texts for the Office. It was accepted doctrine that the Old Testament revela¬
tion was a Trinitarian one. God the Father was usually the agent depicted in such
scenes because of the appropriation of this operation by the first Person of the Trin¬
ity, but the two images were interchangeable. It was similarly admissable to

25 “For the spirit of the Lord fills the world”. The English barge in the seascape is one of the rare
topical allusions in the manuscript. A simpler version of a seascape overshadowed by the Holy Spirit
may be found in one of the border medallions illustrating the Hours of the Holy Spirit in BL Egerton
MS 2019, a mid-fifteenth century manuscript painted by the Bedford workshop, with a conventional
Pentecost scene in the main miniature: Janet Backhouse, Books of Hours (London: 1985) Plate 43.

exchange the figure of Christ for a Trinity group in the Majesty image used to illus¬
trate Trinity Sunday in the Châteauroux Breviary. The same process occurred in the
theatre. In the opening sequence of the Passion d’Arras a single actor playing God
the Father represents the Trinity according to the doctrinally sound stage direction,
Cy est la Trinité en paradis с’ est assavoir Dieu le père. The English version in the
Ludus Coventriae (or N-town) cycle, however, gives speaking roles to all Three Per¬
sons of the Trinity.

Such variations on a theme of religious experience in forms approved by the
Church all worked from within a shared orthodoxy. The connection between the
Advent miniature in the Salisbury Breviary and the two pageants mentioned by
Spencer is not coincidental, but neither is it essential to an understanding of the
miniature. It is more likely that the Advent miniature indirectly influenced the com¬
position of the miniature in the Whamcliffe Hours, than that they both shared an
early fifteenth century model illustrating the Procès du paradis. Similarly, both
pageants were types for Advent, and borrowed their position in the mystery cycle
from the Office.

One important aspect of the Advent miniature still remains unexplained by
reference to either pictorial or dramatic precursors. Only two of the scroll texts are
taken directly from the Office of Advent. “Obsecro domine” is the pre-Lauds
Responsory for the first week in Advent, and “Ostende nobis” is a Versicle, derived
from the Penitential Psalm “Miserere mei deus” (Ps. 50: 3) which was used as a
Chapter Responsory at Sext during Advent.26 The meaning of “Statim veniet”
(Mai. 3: 1) in the context of the Advent miniature is clear, but the Chapter from
Malachi was used only in the Office of the Purification of the Virgin. “Domine prcs-
tolamur” is not used in the Breviary at all. Its closest biblical parallel may be found
in Isaiah 8: 17, “Et expectabo Dominum...et praestolabor eum,” (but see also
Judges 6: 18, “Ego prestolabor adventum tuum”).

This group of texts, regardless of their exact source, gives to the Advent minia¬
ture a fourth, didactic, role. Clerics had an important part to play as intermediaries
between the laity and the Divine Office. It can be demonstrated that Bedford’s own
chaplains worked closely on the decorative programme of the Salisbury Breviary.
At least two of his agents prepared lists of subjects for the enormous border cycle.
They were not as involved in the main figurai cycle, but the use of texts from an
external source in the Advent miniature bears witness to the collaboration of a cleric
in its design. The main function of the texts is to provide the user of the manuscript
with a summary of the spiritual meaning of the Office in words as well as pictures.
The overall effect is dramatic to the modem viewer, and the possibility of a theatri¬
cal source for the programme cannot be excluded. As late as the 1420s, however,
the aim of illustrative art was still to represent the spoken or heard word, of which
“both picture and script were the conventional signata”.27

^ Also as part of the preces at Compline, and together with the Psalm during the blessing of the salt
and water on Sundays after Prime.