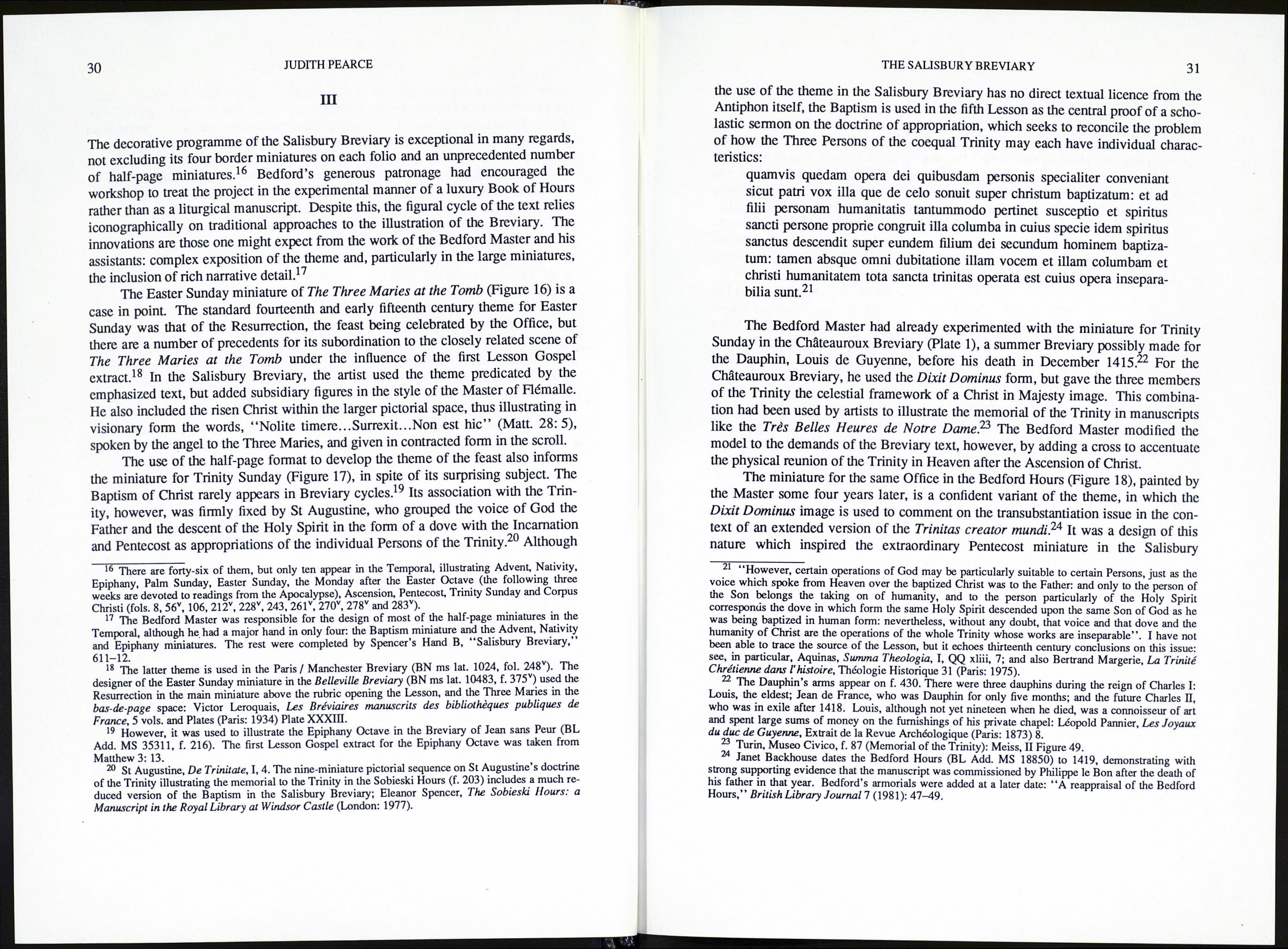 The subjects used to illustrate these Offices are drawn directly from the text.
For the lesser Sundays and weekdays lacking unique texts for first Vespers, this
resulted in a range of somewhat arbitrary themes dependent on the first Noctum Les¬
sons.9 The case is different for the nine feasts. There were established traditions for
the visual interpretation of their themes, many of which were shared by Books of
Hours. The versions used in the Breviary, however, were more prescribed than in a
para-liturgical manuscript. After the adoption of the feast of the Trinity in 1334, the
Office of Trinity Sunday was routinely illustrated in Paris manuscripts by the Mercy
Seat version of the Trinity, because the Dixit Dominus Trinity was firmly associated
with the illustration of Psalm 109 in the Psalter (Figure 13).

Such traditions could be in conflict with the artist’s obligation to relate the
image directly to the particular text being emphasized. Designers of Breviary cycles
were aware that the doctrine of the Trinity epitomized by the first Vespers Antiphon
“Gloria tibi trinitas/ equalis una deitas” was better expressed pictoriaUy by the
Dixit Dominus than the Mercy Seat version of the theme. The Psalter tradition was
so fixed, however, that it was transferred to the Temporal through the medium of
Books of Hours, where images were less firmly connected to individual texts.
Thus the miniature for Trinity Sunday in a late fourteenth century summer Breviary
in Manchester (Figure 14) borrows its Dixit Dominus format and unusual iconogra¬
phy from a model like the one illustrating the memorial of the Trinity in the Heures
de Jeanne de Navarre (f. 129). The landscape details within the orb in both exam¬
ples reinforce the idea of the Trinity as Creator Mundi.11

The first Sunday in Advent posed additional problems for the illustrator
because the Office was not directly associated with a particular feast. The complex
function of Advent as the season opening the Liturgical Year is reflected in its texts
which, directly or through exegesis, predict or implore Christ’s coming, or rehearse
the moment of incarnation. The main illustration for Advent carried the triple
responsibility of giving pictorial form to such texts, of illustrating the Office as a
whole, and of opening the Temporal. The synthesizing function of the image was
particularly great when the opening rubric was the text receiving pictorial emphasis.

Solutions to this problem were sought in such themes as the Annunciation,
references to which are interwoven throughout the Office in the form of musical
commentaries to the Chapters and Lessons.12 Another synthetic theme owed its

9 For example, the Breviary of Charles V (BN ms lat. 1052), dated soon after 1369, has an Old Tes¬
tament cycle for eight of the nine Sundays preceding Palm Sunday: listed in Robert Calkins, Illuminat¬
ed Books of the Middle Ages (London: 1983) 303. The Lessons for this period were taken from

10 This has also been observed by Don Denny: “The Trinity in Enguerrand Quarton s Coronation

11 This is now Paris, BN Nouv. Acq. ms lat. 3145. Folio 129 is illustrated in Millard Meiss, French
Painting in the Time of Jean de Berry: The Late XIV Century and the Patronage of the Duke, 2nd ed., 2
vols. (New York: 1969) П, Figure 601. For the Trinity as Creator Mundi, see Adelhard Heimann,
“Trinitas creator mundi,” Journal of the Warburg and Courtauld Institutes 2 (1938—39). 42—52. A
winter Breviary produced by the same workshop as the Breviary in Manchester survives as BN ms lat.

12 The Annunciation illustrates the rubric in an early fifteenth century Breviary in London (BL Harl.
MS 2927, f. 132), and the first Vespers Chapter in a Breviary for Roman Use made for Blanche de

popularity to its use in Italian fourteenth century Antiphonals or Graduais to illus¬
trate the opening Antiphon “Aspiciens a longe” or the Introit “Ad te levavi” (Ps.
24: 1). Old Testament figures occupy the lower half of the opening initial in each
case, praying earnestly to the figure of Christ in Majesty or the enthroned Virgin and
Child in the upper level.13 A simple version of this theme may be found opening the
rubric for Advent in a late fourteenth century Paris Breviary in Amiens (Bibl. Mun.
ms 114, f. 7), where a single figure in biblical robes prays to God the Father before
an altar. The exact identification of such figures was less important than the recogni¬
tion of their role as representative of the whole group of patriarchs and prophets liv¬
ing a life of prayer and penance under God’s law before the Incarnation.

The “Aspiciens a longe” tradition also explains the group of men and women
in the bas-de-page of the folio opening the Chapter from Jeremiah 23: 5 for first
Vespers in the Belleville Breviary (Figure 15).14 The reference in the Chapter to
David as the ancestor of Christ is directly illustrated in the miniature. The subject is
expanded, however, by the depiction, on the bottom right, of the risen Christ in a
mandorla, displaying his wounds. The promise of judgment and justice prophesied
in the Chapter text and prayed for by the group at the left, is shown to have been
fulfilled through the Resurrection of Christ. The designer of the folio thus makes it
clear that Advent was seen, not only as a time of preparation before the commemora¬
tion and re-enactment of the historical sequence of events initiated by Christ’s Birth,
but also as a time of anticipation for the second triumphant coming of Christ.

When the first Lesson from Isaiah 1: 1 was illustrated, artists usually depicted
Isaiah as prophet of the Incarnation. This is the case in the Breviary of Blanche de
France and the Belleville Breviary, both of which have two illustrations for Advent.
In the former (f. 103v), Isaiah stands holding an empty scroll looking up at the head
of Christ in a blue cloud. In the latter (BN ms lat. 10483, f. 214), he sits at a lectern
looking at the head of a dove emerging from a cloud, while in the bas-de-page, a
crowd of men point upwards. The single miniature in the Breviary of Charles V is
slightly more complex.15 The artist shows Isaiah prophesying to a group of sleeping
people, one of whom awakens. The half-length figure of the Virgin, through whom
the prophecy is to be fulfilled, appears in her guise as Queen of Heaven in the upper
comer of the miniature.

^ The Chapter reads Fece dies veniunt dicit dominus, et suscitabo David germen iustum et regnabit
rex et sapiens erit et faciet iudicium in terra (“Behold, the days come, saith the Lord, that I will raise
unto David a righteous Branch, and a King shall reign and prosper, and shall execute judgment and jus¬
tice in the earth”).