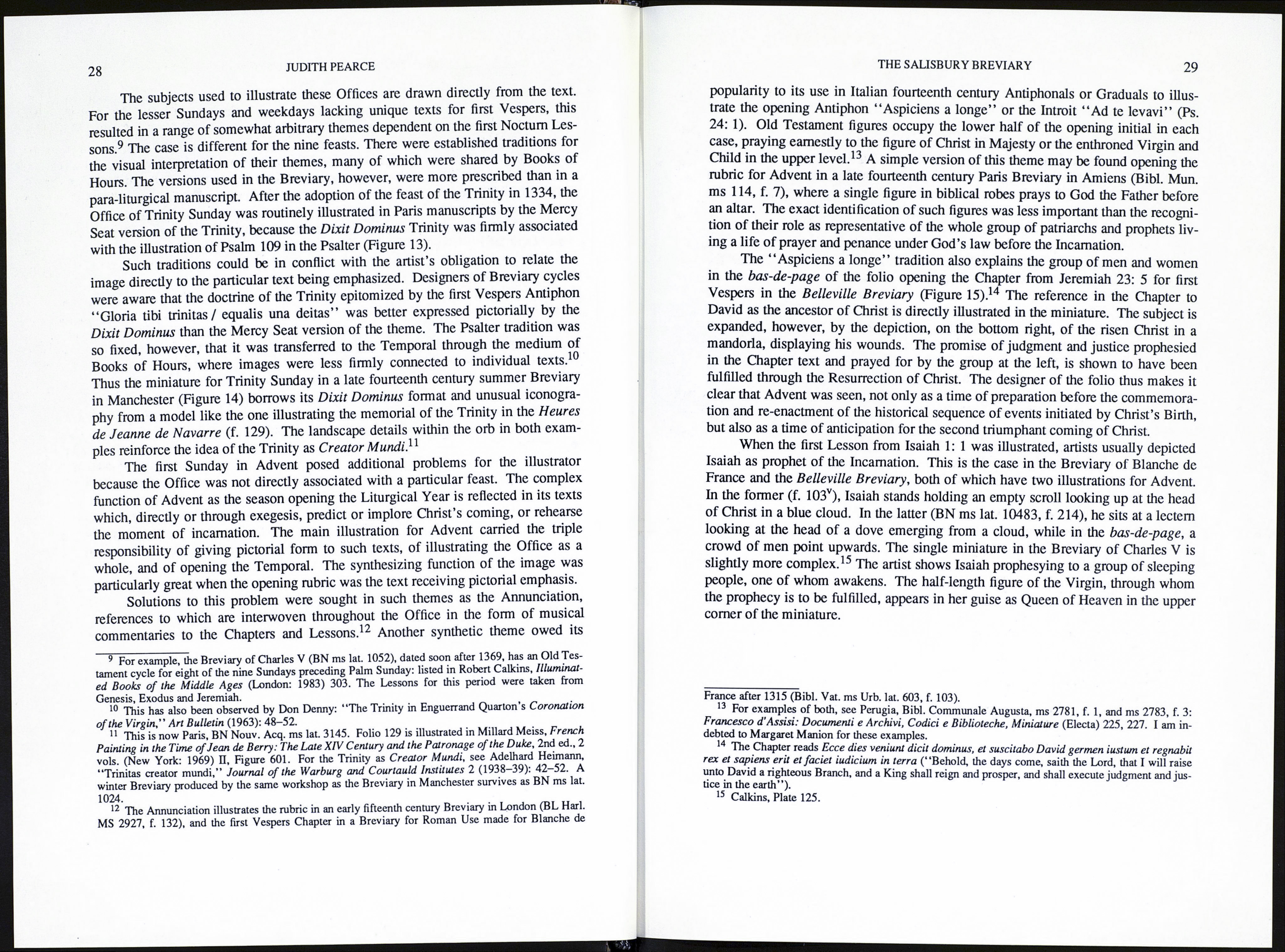 is anticipated. The need for penance in preparation for his coming is conveyed by
David, whose scroll reads Ostende nobis domine misericordiam tuam (Ps. 84: 8
“Show us your mercy Lord”).

Most dramatised versions of the Ordo prophetarum draw upon the same exe-
getical traditions as the Tree of Jesse and the cycle in the Belleville Breviary. Pro¬
phets, patriarchs and pagans come forward in turn to bear witness to the coming of
Christ.2 Old Testament characters were used in a supplicatory role, however, to pre¬
face the Nativity plays in some late medieval French mystery cycles. The earliest
extant example occurs in Amoul Gréban’s Mystère de la passion, performed first in
Paris in 1452.3 In the play, which is set in Limbo, Adam, Eve, Isaiah, Ezechiel, Jere¬
miah and David each implore the fulfilment of the prophecies as a preface to the
Procès de paradis. The Procès de paradis was a dramatic dialogue probably first
used in the French theatre to frame the four-day long Passion d’Arras? Before the
opening scenes, the Trinity in the form of God the Father responds to the arguments
and pleas of four of the Virtues by sending Gabriel to announce the Incarnation to
the Virgin. At the end of the performance, the Heavenly Host, including the dissent¬
ing Virtues, rejoice at the return of Christ and give praise to the Trinity.

Spencer was alerted to a connection between the Advent miniature and these
two pageants through her familiarity with illustrations of the Procès du paradis in a
series of Books of Hours painted by the workshop of Maître François in the third
quarter of the fifteenth century. The theme was used with The Annunciation for
Matins of the Hours of the Virgin. In the example in the Wharnclijfe Hours (Fig¬
ure 12), probably executed between 1475 and 1480, the artist unites the opening and
closing scenes of the play.5 Whilst the miniature in the Salisbury Breviary does not
illustrate the same theme, it is linked in subject with the supplicatory version of the
Ordo Prophetarum which precedes the Procès du paradis in Gréban’s play. The
role of Gabriel as agent in the salvation of mankind is also emphasized in both mini¬
atures. In addition, the Advent miniature similarly telescopes the events of Christ’s
life, by depicting the Trinity in all three of its appropriations.

If the iconographie sources for the Advent miniature or its models derive from
a play like Gréban’s, then it provides strong evidence that the Procès du paradis was
performed in association with a supplicatory prophet play at a much earlier date than

2 Grace Frank, The Medieval French Drama (Oxford: 1954) 39-42, 67, 136-53. The Ordo Pro¬
phetarum was used as early as the mid-twelfth century as the third part of the Mystère d’Adam: Carl J.
Odenkirchen, The Play of Adam (Ordo Represenlacionis Ade) (Brookline, Mass. and Leiden: 1976). It
also appears in three of the four surviving English Corpus Christi cycles between the Old Testament
pageants and the series of Nativity plays: Peter Happe, ed., English Mystery Plays: A Selection (Har-
mondsworth: 1975) 188-215.

5 Margaret Manion, The Wharncliffe Hours: A Fifteenth Century Illuminated Prayer-book in the

the surviving documents suggest. Much remains to be understood, however, about
the degree to which liturgically significant themes explored through various media
were part of a shared thought world. The dangers of interpreting similarities
between art and theatre as evidence of direct influence are particularly great when
looking at images in illuminated manuscripts which form part of a larger cycle. It is
not sufficient to define the elements which the Advent miniature has in common
with the two pageants; one must also explore how it compares with illustrations for
Advent in other liturgical manuscripts produced in the same artistic milieu. The
Salisbury Breviary, although made for an alien use and patron, was written in Paris a
short time after 1424, and decorated by the Paris-based Bedford workshop.6

In the Temporal of Breviaries made in Paris in the late medieval period, the Offices
most frequently emphasized in the hierarchy of decoration include those for the
feasts of the Nativity, Circumcision, Epiphany, Resurrection, Ascension, Pentecost,
Trinity and Corpus Christi, together with the Dedication of a Church, the first Sun¬
day in Advent, the ten weeks leading up to Easter, and the Sundays opening the
post-Epiphany, post-Easter and summer seasons.7 The emphasis is usually carried
by one or at most two initials or column miniatures within the Office, their size
depending on the importance of the text. The texts receiving the decorative emphasis
vary from Office to Office and from manuscript to manuscript. The Antiphon and
Chapter for first Vespers were strong candidates, in competition with the Invitatory
and the first Lesson of Matins or its Responsory. In early fifteenth century Bre¬
viaries, attempts at standardization are reflected in a preference for the first Lesson.
During the second decade of the fifteenth century, there was also some experiment
with half-page miniatures for the most highly ranked Offices.8

6 The patron was John of Lancaster, Duke of Bedford and Regent of France from 1422-36. The
date of the commission is suggested by a note on f. 2V, giving the dominical letter for 1424. The
manuscript was never finished, and may have remained in the workshop until long after the death of
Bedford in 1436: see Catherine Reynolds, ‘‘The Salisbury Breviary (BN ms lat. 17294) and some relat¬
ed manuscripts,” diss., Courtauld Institute of Art, University of London, 1986. The Advent miniature,
however, belongs to the period of Bedford’s patronage.

2 The Temporal is the section of the Breviary containing the Offices commemorating the events of
Christ s life. A full discussion of the illustration of the Temporal in Paris Breviaries is given in
Chapter 4 of my thesis, “Text and Image in the Salisbury Breviary (Paris, BN ms lat. 17294): the
decorative cycle and its Paris precursors,” diss., Australian National University, Canberra, 1987.