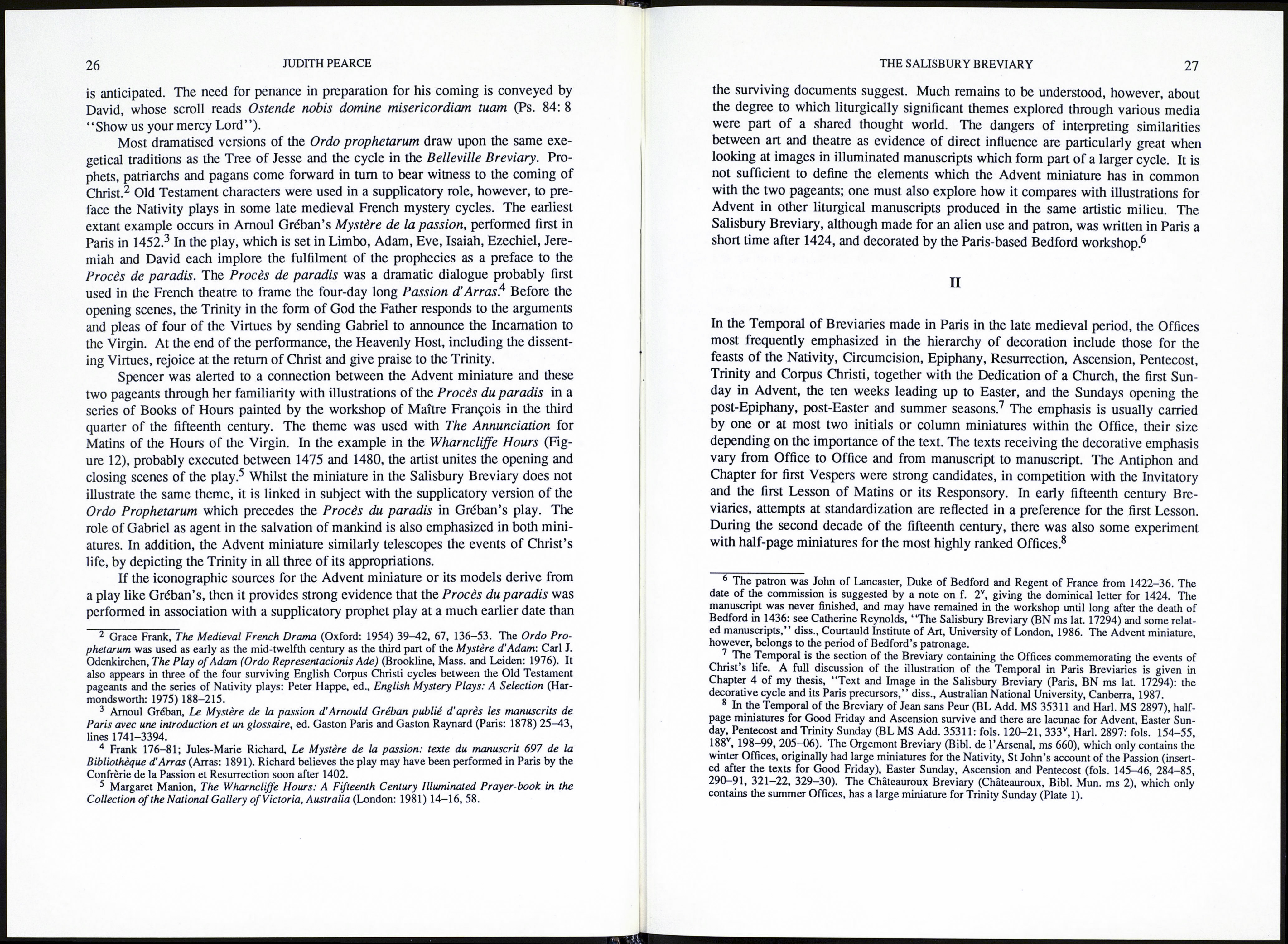 Liturgy and Image: The Advent
Miniature in the Salisbury Breviary

In the Salisbury Breviary (BN ms lat. 17294, f. 7; Figure 11), the half-page minia¬
ture for Advent was seen by Eleanor Spencer to resemble two late medieval
pageants, the Ordo Prophetarum and the Procès du paradis} The miniature shows
Abraham, Isaiah, Jacob, Moses, David and Malachi kneeling or sitting in a
landscape, holding scrolls. Above them, encircled by music-making angels, is a ver¬
sion of the Dixit Dominus Trinity surrounded by the Heavenly Court. Christ is dep¬
icted in his risen form, revealing his wounds and holding the Cross. The third person
of the Trinity holds a scroll bearing the words “Ecce venio” (Ps. 39: 8, Ezech.
21:7). At the bottom of the miniature, Gabriel, with a scroll reading “Spiritus
sanctus superveniet in te” (Luke 1: 35), leans down towards the Virgin reading in
the initial below.

The main difficulty with the miniature is that it has no standard historical or
votive theme. Nor is it related specifically to themes from the prophets like the Tree
of Jesse or the Calendar cycle in the Belleville Breviary (BN mss lat. 10483-84).
Although the Advent miniature also works to demonstrate the concordance between
the Old and New Testaments, all the figures except Malachi, who is depicted in the
typical pose of a prophet, are kneeling in prayer. In addition, only Malachi’s scroll
bears a prophetic text, taken from Malachi 3: 1 and reading Statim veniet dominator
(“Suddenly the Lord will come”). The first scroll, Domine prestolamur adventum
tuum (cf. Is. 8: 17 “Lord we are awaiting your coming”), held by Jacob, reminds the
Lord that his chosen people are ready and waiting for his coming. Moses’ scroll,
Obsecro domine mitte quem missurus es (Exod. 4: 13 “I beseech you Lord, send
him who you are about to send”), expresses the urgency with which Christ’s Advent