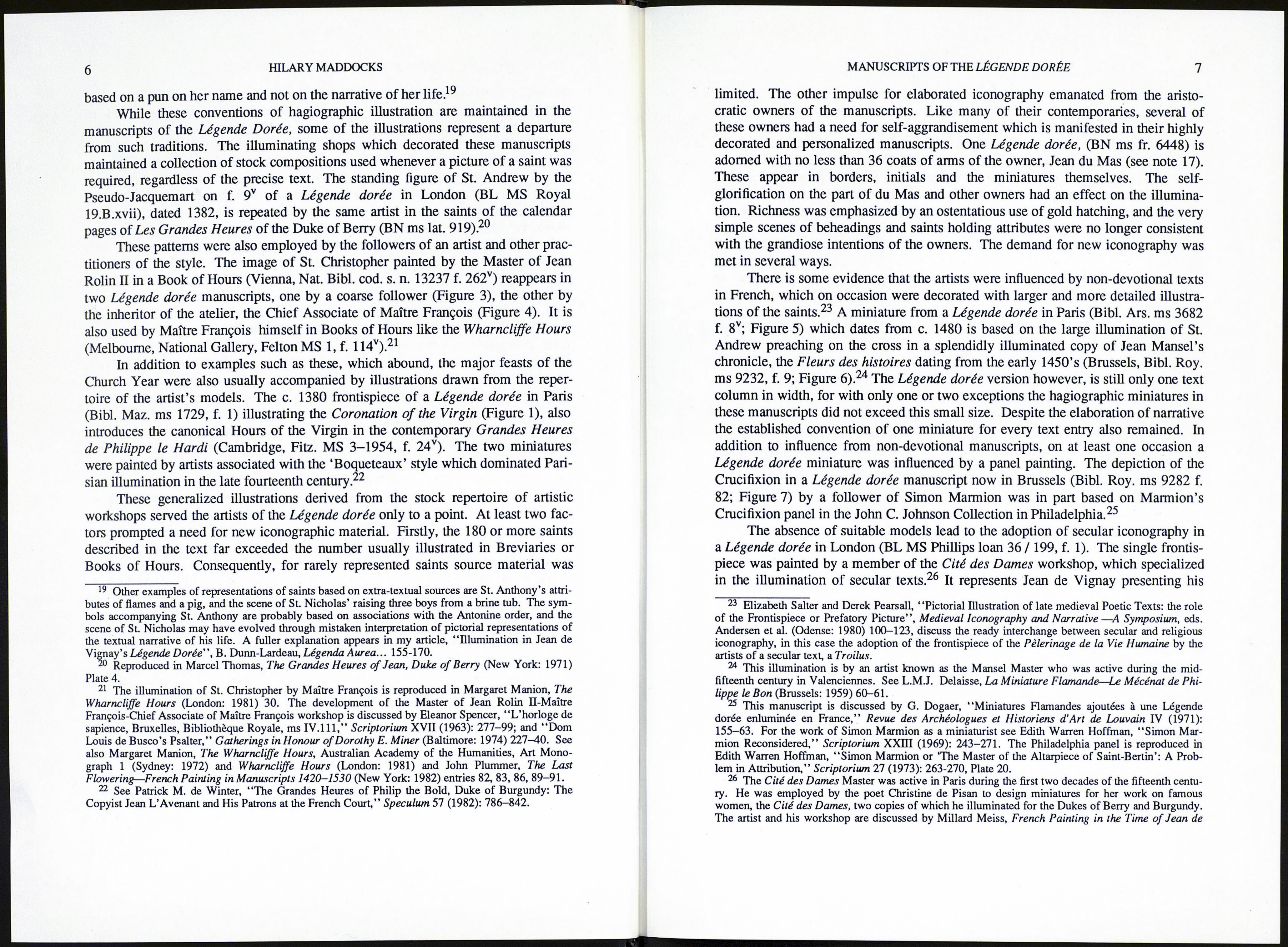 he completed four translations, including the Légende dorée. This is clearly stated
in the translator’s preface, where de Vignay pays homage to his “très haulte noble et
puissante dame, ma dame de bourgoigne”.

It is fitting that the manuscripts of a text prepared for a queen were owned by
aristocrats. A good two-thirds of the 34 extant manuscripts of the Legende dorée
bear arms or signatures indicating that they were commissioned or subsequently
owned by royalty or members of the French and Burgundian aristocracy. Among
these elite owners were Louis le Bâtard de Bourbon; Philippe le Bon, Duc de Bour¬
gogne; two of Philippe le Bon’s counsellors, Jean d’Auxy and Louis de Bruges; Jean
du Mas, Seigneur de l’Isle; and, the bibliophile Charles de Cray. At least two
manuscripts are decorated with entwined initials, suggesting that they were
presented on the occasion of a marriage.14 Even those manuscripts which do not
bear marks of ownership were almost certainly made for or purchased by wealthy
clients, as all but four are embellished with marginal decoration and illumination.
Of the four surviving unillustrated copies, one is incomplete, with spaces left for
miniatures that were never painted, and the miniatures have been excised from
another.15

From an art historical perspective, the illumination in the manuscripts of the
Légende dorée represents a stylistic summary of the major Parisian, and to a lesser
extent the late Flemish, schools of illumination from the mid-fourteenth to the late
fifteenth century. Several artists can be identified by name or by their work in other
manuscripts. These include the Pseudo-Jacquemart, the Master of the Coronation of
the Virgin, the Virgil Master, the Master of the Munich ‘Golden Legend’, Evrard
d’Espinques, Maître François, the Chief Associate of Maître François, the Master of
the Harley ‘Froissart’, and the Master of Margaret of York. Others are distinguished
by their stylistic allegiances, and can be called ‘follower of’ or members of the
workshops of influential artists such as the Boqueteaux Master, the Boucicaut Mas¬
ter, Jean Pucelle, the Master of the Duke of Bedford, Simon Marmion, Willem Vre-
lant, the Master of Jean Rolin II and Loyset Liédet.

The careers of these illuminators relied almost exclusively on the patronage of
the wealthy, and most artists appear to have worked in highly organized professional
workshops dedicated to furnishing the aristocracy with picture books.16 Several, like

14 These are BN ms fr. 244-5, several borders of which are decorated with the initials and arms of
Antoine de Chourses, Royal Chamberlain, and his wife Catherine de Coëtivy, and Brussels, Bibl. Roy¬
ale ms 9282-5 which carries the initials of Philippe de Clèves and Françoise de Luxembourg, who
were married in 1485.

15 The several miniatures which decorated BN ms fr. 23113 have been excised, and the numerous
illustrations intended for BL MS Egerton 645 were not executed. Both manuscripts appear to date
from the early fifteenth century.

16 Evidence suggests that miniaturists often worked together in a workshop under the artistic direc¬
tion of a shop master. This appears to be the case with manuscripts such as BN ms fr. 244-5, where
the more accomplished artists, the Chief Associate of Maître François possibly aided by Maître
François himself, was responsible for the full-page illuminations. Sometimes a manuscript is il¬
luminated by artists working in quite different styles, using unrelated iconography. Here it must be as¬
sumed that the overseer of production farmed out sections of a manuscript to several workshops. An
example is the Légende dorée manuscript now divided between the Pierpont Morgan Library and the
Bibliothèque Municipale in Macon which was illuminated in five unrelated styles. These workshops

the Maître du ‘Polycratique’ who illuminated a Légende dorée just after the turn of
the fifteenth century (Geneva, Bibl. Pub. et Univ. ms fr. 57; Plate 1), seem to have
worked free-lance, in this case for Charles V and his entourage. Others, such as
Evrard d’Espinques, were employed on a semi-permanent basis by one person.17

The programme of illumination in a Légende dorée manuscript generally opens
with a full- or half-page frontispiece depicting Christ in Majesty or The Coronation
of the Virgin. This is followed by a series of small miniatures, one text column in
width, placed at the beginning of each text entry. As there are over 180 different
saints and important feasts described in the Légende dorée these miniatures are
sometimes very numerous. The structure of the programme closely follows the trad¬
ition established in liturgical books such as the Lectionary and Breviary, which were
similarly arranged according to the Church Calendar, and included prayers in honour
of the saints in the Sanctoral.

Like manuscripts of the Legenda aurea, most Breviaries were not illuminated,
but when they were, the saints were usually represented simply—a facing figure
holding an attribute, a traditional, fixed scene from a narrative, or a standard behead¬
ing scene. For example, two illustrations from an early fifteenth century Légende
dorée (BN ms fr. 242, f. 59v) depict the martyrdom of St. Valentine by beheading
and St. Juliana with her symbol, the tethered demon (Figure 2).

In a devotional book these forms had certain advantages. The facing saint,
identified by the attribute, invited address in a way reminiscent of the holy icon. The
traditional scene, such as St. Agatha’s torture, where her breasts are tom off, also
aided identification in its reference to a particular miracle associated with the saint or
to the saint’s martyrdom. The third form, the paradigmatic beheading scene, did not
aid specific identification, but in an important sense imparted, as an exemplum for
the worshipper, the only information necessary about the life of the saint; he or she
was a martyr who had died for the faith.18

These three types of representation were not always reliant on an accompany¬
ing text for their meaning, which was sometimes determined by factors other than
textual tradition. For example, the customary attribute of St. Agnes, the lamb, is

18 Charles F. Altman, “Two Types of Opposition and the Structure of Latin Saints’ Lives,”
Medievalia et Humanística ns 6 (1975): 1-11, notes that hagiographical accounts can be divided into
two main groups: the passio and the vita. Each narrative consists of several constant characteristics.
The passio form for instance involves a dialogue in which a government representative attempts to in¬
duce the Christian to recant, persecution involving torture, and finally martyrdom. This narrative does
not rely on particulars for a worshipper to appreciate the processes of martyrdom, and a depiction of
martyrdom by beheading assumes an understanding of this basic pattern on the part of the viewer.