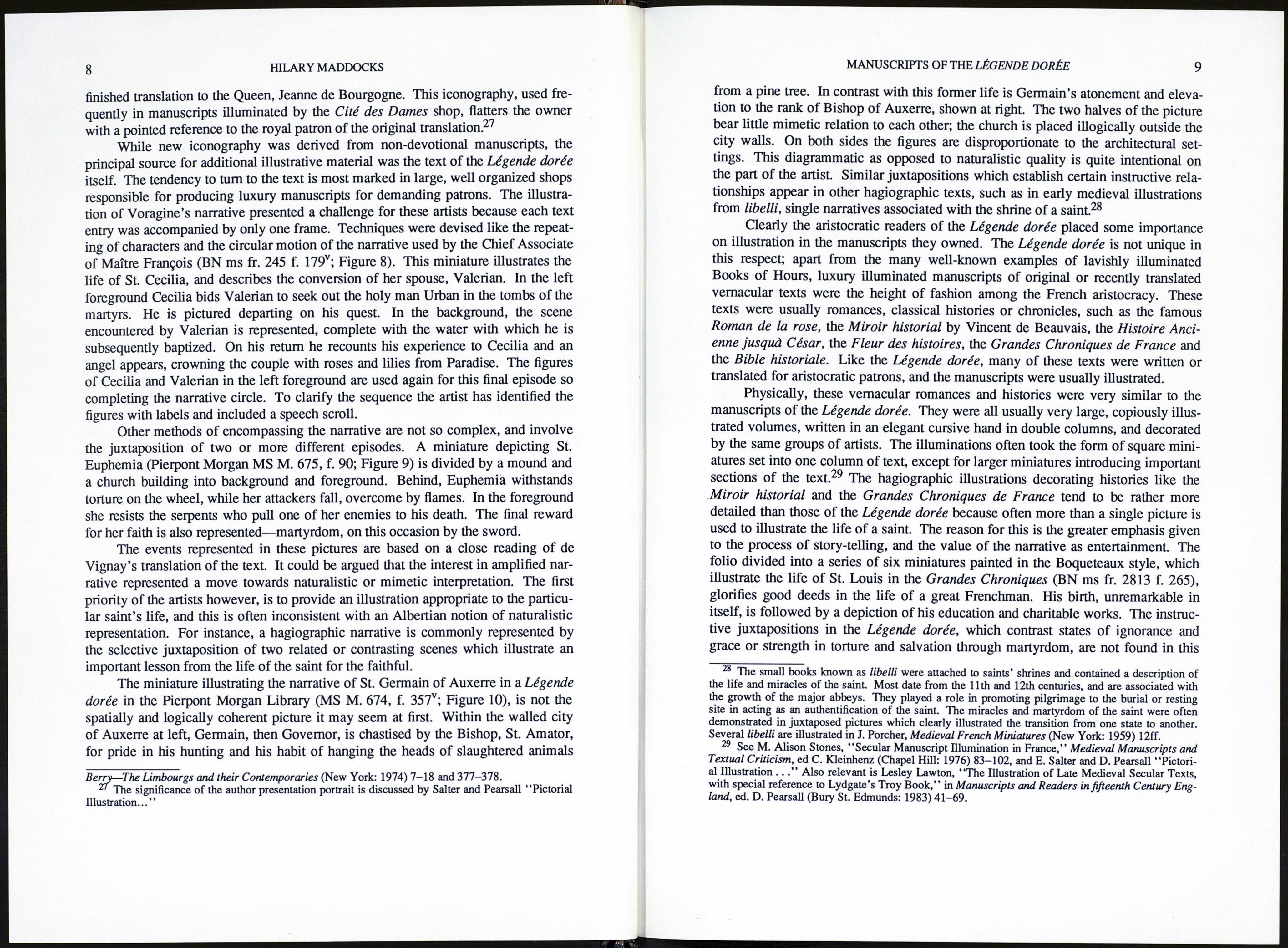 based on a pun on her name and not on the narrative of her life.19

While these conventions of hagiographie illustration are maintained in the
manuscripts of the Légende Dorée, some of the illustrations represent a departure
from such traditions. The illuminating shops which decorated these manuscripts
maintained a collection of stock compositions used whenever a picture of a saint was
required, regardless of the precise text. The standing figure of St. Andrew by the
Pseudo-Jacquemart on f. 9V of a Légende dorée in London (BL MS Royal
19.В.ХѴІІ), dated 1382, is repeated by the same artist in the saints of the calendar
pages of Les Grandes Heures of the Duke of Berry (BN ms lat. 919).20

These patterns were also employed by the followers of an artist and other prac¬
titioners of the style. The image of St. Christopher painted by the Master of Jean
Rolin II in a Book of Hours (Vienna, Nat. Bibl. cod. s. n. 13237 f. 262v) reappears in
two Légende dorée manuscripts, one by a coarse follower (Figure 3), the other by
the inheritor of the atelier, the Chief Associate of Maître François (Figure 4). It is
also used by Maître François himself in Books of Hours like the Wharncliffe Hours
(Melbourne, National Gallery, Felton MS 1, f. 114v).21

In addition to examples such as these, which abound, the major feasts of the
Church Year were also usually accompanied by illustrations drawn from the reper¬
toire of the artist’s models. The c. 1380 frontispiece of a Légende dorée in Paris
(Bibl. Maz. ms 1729, f. 1) illustrating the Coronation of the Virgin (Figure 1), also
introduces the canonical Hours of the Virgin in the contemporary Grandes Heures
de Philippe le Hardi (Cambridge, Fitz. MS 3-1954, f. 24v). The two miniatures
were painted by artists associated with the ‘Boqueteaux’ style which dominated Pari¬
sian illumination in the late fourteenth century.22

These generalized illustrations derived from the stock repertoire of artistic
workshops served the artists of the Légende dorée only to a point. At least two fac¬
tors prompted a need for new iconographie material. Firstly, the 180 or more saints
described in the text far exceeded the number usually illustrated in Breviaries or
Books of Hours. Consequently, for rarely represented saints source material was

19 Other examples of representations of saints based on extra-textual sources are St. Anthony’s attri¬
butes of flames and a pig, and the scene of St. Nicholas’ raising three boys from a brine tub. The sym¬
bols accompanying St. Anthony are probably based on associations with the Antonine order, and the
scene of St. Nicholas may have evolved through mistaken interpretation of pictorial representations of
the textual narrative of his life. A fuller explanation appears in my article, “Illumination in Jean de
Vignay’s Legende Dorée”, В. Dunn-Lardeau, Légenda Aurea... 155-170.

limited. The other impulse for elaborated iconography emanated from the aristo¬
cratic owners of the manuscripts. Like many of their contemporaries, several of
these owners had a need for self-aggrandisement which is manifested in their highly
decorated and personalized manuscripts. One Légende dorée, (BN ms fr. 6448) is
adorned with no less than 36 coats of arms of the owner, Jean du Mas (see note 17).
These appear in borders, initials and the miniatures themselves. The self-
glorification on the part of du Mas and other owners had an effect on the illumina¬
tion. Richness was emphasized by an ostentatious use of gold hatching, and the very
simple scenes of beheadings and saints holding attributes were no longer consistent
with the grandiose intentions of the owners. The demand for new iconography was
met in several ways.

There is some evidence that the artists were influenced by non-devotional texts
in French, which on occasion were decorated with larger and more detailed illustra¬
tions of the saints.23 A miniature from a Légende dorée in Paris (Bibl. Ars. ms 3682
f. 8V; Figure 5) which dates from c. 1480 is based on the large illumination of St.
Andrew preaching on the cross in a splendidly illuminated copy of Jean Mansel’s
chronicle, the Fleurs des histoires dating from the early 1450’s (Brussels, Bibl. Roy.
ms 9232, f. 9; Figure 6).24 The Légende dorée version however, is still only one text
column in width, for with only one or two exceptions the hagiographie miniatures in
these manuscripts did not exceed this small size. Despite the elaboration of narrative
the established convention of one miniature for every text entry also remained. In
addition to influence from non-devotional manuscripts, on at least one occasion a
Légende dorée miniature was influenced by a panel painting. The depiction of the
Crucifixion in a Légende dorée manuscript now in Brussels (Bibl. Roy. ms 9282 f.
82; Figure 7) by a follower of Simon Marmion was in part based on Marmion’s
Crucifixion panel in the John C. Johnson Collection in Philadelphia.25

The absence of suitable models lead to the adoption of secular iconography in
a Légende dorée in London (BL MS Phillips loan 36 / 199, f. 1). The single frontis¬
piece was painted by a member of the Cité des Dames workshop, which specialized
in the illumination of secular texts.26 It represents Jean de Vignay presenting his

23 Elizabeth Salter and Derek Pearsall, “Pictorial Illustration of late medieval Poetic Texts: the role
of the Frontispiece or Prefatory Picture’ ’, Medieval Iconography and Narrative —A Symposium, eds.
Andersen et al. (Odense: 1980) 100-123, discuss the ready interchange between secular and religious
iconography, in this case the adoption of the frontispiece of the Pèlerinage de la Vie Humaine by the
artists of a secular text, a Troilus.

24 This illumination is by an artist known as the Mansel Master who was active during the mid¬
fifteenth century in Valenciennes. See L.M.J. Délaissé, La Miniature Flamande—Le Mécénat de Phi¬
lippe le Bon (Brussels: 1959) 60-61.

26 The Cité des Dames Master was active in Paris during the first two decades of the fifteenth centu¬
ry. He was employed by the poet Christine de Pisan to design miniatures for her work on famous
women, the Cité des Dames, two copies of which he illuminated for the Dukes of Berry and Burgundy.
The artist and his workshop are discussed by Millard Meiss, French Painting in the Time of Jean de