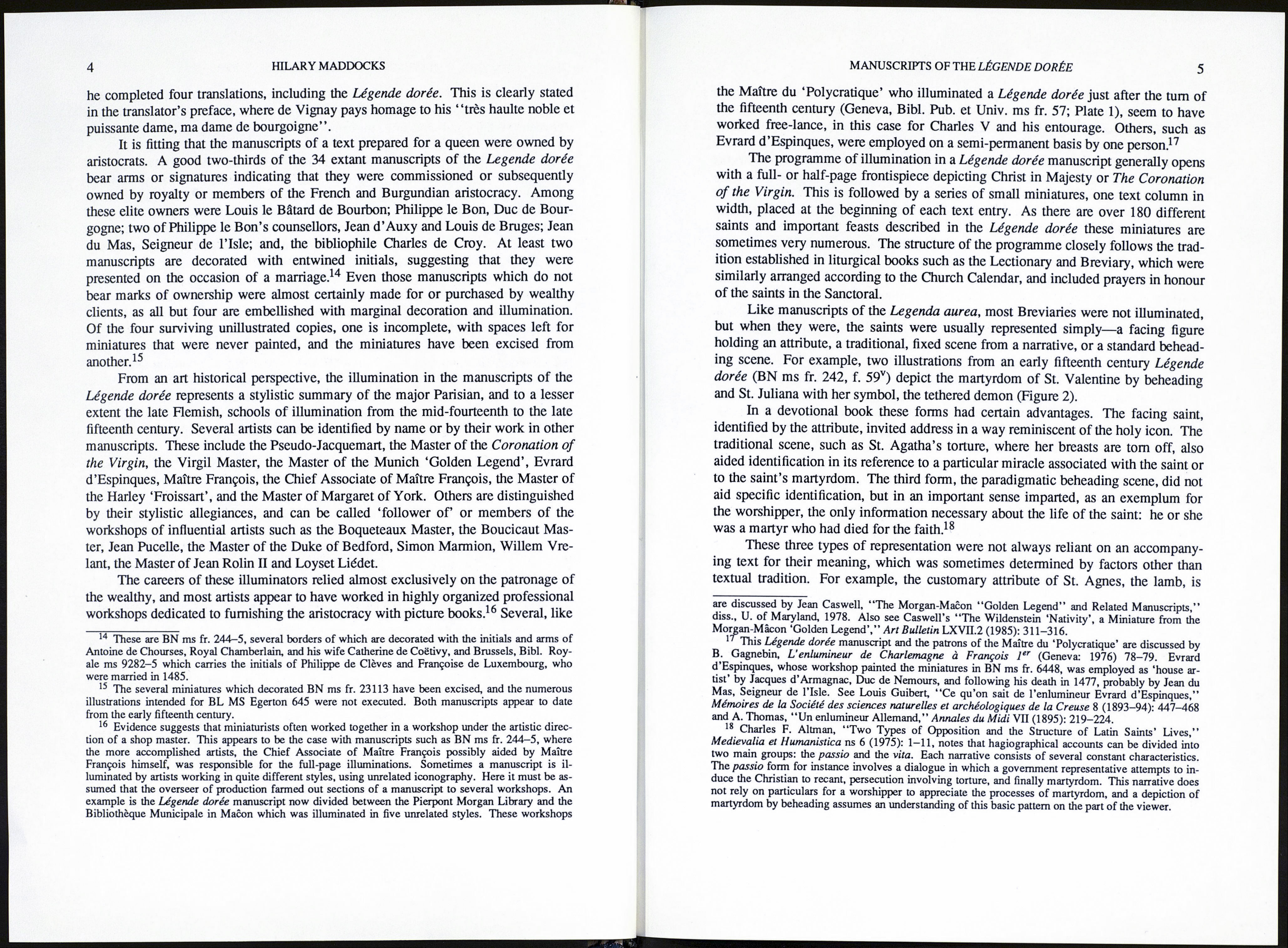 the obvious barrier the Latin language presented to the thirteenth century layperson.3
She has shown that the Legenda, like other thirteenth century collections of abbrevi¬
ated saints’ lives arranged according to the order of the Liturgical Year, was written
with a clerical audience in mind, and was used as a source book for sermons and
readings on important feast days.4 However, unlike these other compendia, the
Legenda aurea was used by educated Dominican churchmen as a weapon against
heretical and lay challenges to the authority of the thirteenth century Church.5
Reames supports this assertion with a close study of the text, which reveals
emphases on complex, theologically controversial issues and concise accounts of
God’s harsh retribution.6 A great many Latin manuscripts of the Legenda aurea are
extant today—over 1000 compared to around 20 each of its closest rivals—a
discrepancy which Reames attributes to deliberate promotion on the part of the
Church in the thirteenth century.7

The physical appearance of the manuscripts of the Legenda aurea and their
patterns of early provenance are consistent with Reames’ findings. The great major¬
ity were owned by clerics and monastic institutions. As a source book for sermons
they were essentially utilitarian, and few contain any decoration or illustration.8

of modem reception of the Legenda aurea see Reames chap. 1.

3 See James Westfall Thomson, The Literacy of the Laity in the Middle Ages (New York: 1960).

4 Two other thirteenth century collections of abridged saints’ lives arranged according to the Liturg¬
ical Year are the Abbreviato in gestis miraculis sanctorum by Jean de Mailly, and Bartholomew of
Trent’s Epilogus in gesta sanctorum. Unlike the Legenda aurea, these works include a prologue indi¬
cating the intended audience. Bartholomew of Trent’s Epilogus in gesta sanctorum is designated as a
sourcebook for Dominican and other preachers, while Jean de Mailly intended his collection of saints’
lives to be used by parish priests for purposes of instruction.

5 During the thirteenth century the pre-eminence of the Church of Rome was threatened on two
fronts. An ongoing power struggle between the Emperor, Frederick II, and the Papacy centered on the
Emperor’s attempts to unite the North and South of Italy and so diminish the basis of the Pope’s power.
The second challenge was posed by the emergence of heretical sects such as the Waldenses and Albi-
gensians in Northern Italy and the Languedoc region. For a discussion of the role the Dominican order
played in suppressing heresies see Georges Duby, The Age of the Cathedrals (Chicago: 1981) chap. 6.

° For example, Voragine devotes much attention to the feast of the Assumption of the Virgin in a
lengthy, partly apocryphal narrative which culminates in her Coronation in Heaven by Christ. As Ec¬
clesia, a symbol of the Church, the crowned Virgin affirmed the sovereignity of the Church of Rome.
In answer to the Albigensians, whose beliefs involved the rejection of all physical matter as evil, it
reinforced the Christian dogma of the Incarnation. Many passages also stress the wrath of a vengeful
God against detractors. Sinners are severely punished and demonstrations of mercy are few. These
sentiments are contained within mainly short, straightforward narratives designed to make these mes¬
sages as clear as possible.

According to Reames’ thesis, only educated clergymen would have understood the implications of the
situation and the subtleties of the theologically complex passages. These sophisticated readers would
have selected suitable passages for particular purposes, such as to intimidate potential critics.

8 One rare exception is a richly illuminated volume in the Glasgow University Library, MS General

1111. Originally illuminated with 106 miniatures by Flemish artists in the early fifteenth century, it

was probably made for the Augustinian canons of S. Antonio in Piacenza; see Nigel Thorp, The Glory

Illuminated Legenda aurea manuscripts are rarely as splendid as this one. An example in Vienna, Na-

While Reames’ argument for the audience and purpose of the Legenda aurea is con¬
vincing, she is at a loss to explain the almost equal success of the text in translation.
Between the thirteenth and fifteenth centuries Voragine’s work was translated into
all the major European languages.9 Why was this text, which was written for a
sophisticated audience under certain circumstances, such a runaway success in the
vernacular during the following two centuries? It is difficult to see why the long,
theologically complicated passages and the concise, often non-discursive narratives
of the saints’ lives should have attracted a large lay audience, particularly when more
suitable compendia were available for translation.10 This is particularly true of the
most popular of seven French translations undertaken during the late Middle Ages.11
Jean de Vignay’s Légende dorée, which was translated in 1333, was a very close
rendition of Voragine’s Latin, preserving all his biases and long winded passages.12
To clarify the attraction the text held for a fourteenth to fifteenth century French
audience we must turn to the 34 extant manuscripts of de Vignay’s translation and,
more specifically, to their illumination.13

In the preface to his translation, de Vignay claims that “cest souverain bien
faire entendre aux gens qui ne sont pas lettres”. Yet there was nothing democratic
about de Vignay’s intentions. His translation was not popular at all, in the true sense
of the word, but targeted to a specifically royal and aristocratic audience. Jean de
Vignay was a clergyman who specialized in performing translations for the royal
family. He was a particular favourite of the Queen, Jeanne de Bourgogne, for whom

10 Jean de Mailly's and Bartholomew of Trent's compilations are pitched more to an unlearned au¬
dience. They do not include the long and complicated passages which distinguish the Legenda aurea,
and the text is presented to meet the specific needs of parish priests and preachers. Reames (164ff.)
discusses some differences between Voragine’s narratives and those of his fellow hagiographers.

13 Vida Russell and Richard Hamer have identified 32 manuscripts of de Vignay’s Légende
dorée—Hamer and Russell 131-135; see also Richard Hamer, “Jean Golein’s Festes Nouvelles: A
Caxton Source”, Medium Ævum LV (1986): 254-60. In addition to the 32 manuscripts, Russell and
Hamer have identified but not located two more. One appears as entry 94 in A Catalogue of Illuminat¬
ed and other MSS together with some works on Paleography, Bernard Quaritch Limited, 1931. The
other is listed in a Sotheby’s sale catalogue, Catalogue of the Library of Sir John Arthur Brooke, 25
May 1921, Lot 1470. A fragment in BN ms n.a. fir. 11198 fols. 29-31 may also be a de Vignay transla¬
tion. I thank Anne van Buren for drawing this to my attention.

A list of the manuscripts of the Légende dorée, with the appropriate sigla assigned by Russell and Ha¬
mer, is given in the Appendix to this article. The suffix ‘b’ refers to a second version of the text, com¬
pleted in c. 1402, when the original text was augmented with some 40 saints; see Hamer 254-60. Most
of these additional saints were French, or had special significance for a French audience. The ‘c’ suffix
refers to a third version undertaken in the late fifteenth century, in which the order of the contents were
changed and some items inserted. This version is represented by only three manuscripts, which were
all produced or illuminated in Flanders. This article focuses on the two earlier versions of the text.