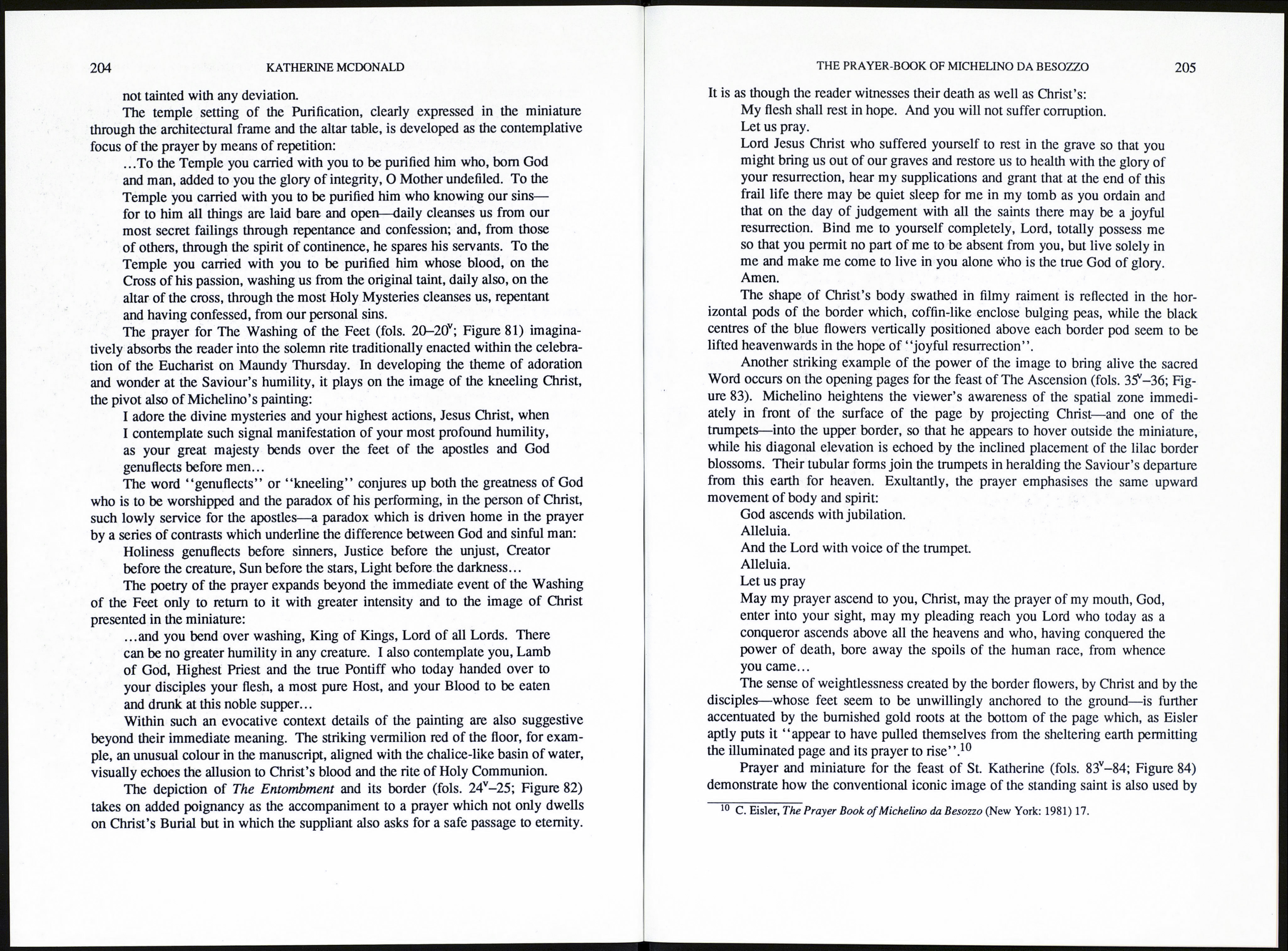 Although a study of the prayer-book as a whole is impeded by the fact that
twenty-five of the original forty-seven miniatures have been excised by later owners
and that with them also has been lost those sections of the text which were written
on the reverse of the painted page, enough remains to establish the book’s basic
structure. Each of the prayers begins on the recto of the folio and is introduced by a
full-page miniature on the facing verso. All have the same format being introduced
by a short Versicle and Response, often Scriptural in origin, which is followed by
the word “Oremus”.4 This liturgical and formulaic setting, however, is in strong
contrast to the tone of the prayers themselves. Written in the first person and often
charged with intense emotion they belong to the tradition of the Libelli Precum, col¬
lections of prayers for private devotion which became widespread in Europe from
the ninth century, and which played an important part in the development of
medieval spirituality.5

Several of the prayers in MS M. 944 are North Italian and Augustinian in char¬
acter, and while some may be traced back several centuries, the inclusion of more
recent feasts such as that of St. Nicholas of Tolentino, who died in 1305, and of the
Trinity, indicates that the text was probably compiled no later than the third decade
of the fourteenth century.6 Whether or not this compilation is unique is yet to be
established and the authorship and origins of many of the specific texts have also to
be determined. I have, however, identified several excerpts or adaptations for the
prayers of St. Anselm (1033-1109), native of Aosta in Northern Italy, who became
abbot of the Norman abbey of Bee and later Archbishop of Canterbury. In his busy
life, Anselm found time to write long meditative compositions for his friends, and in
a letter to the Countess Mathilda of Tuscany, the recipient of some of these, he

6 Cecilia O’Brien, Department of Fine Arts, The University of Melbourne, first alerted to me the

Augustinian nature of the prayer-book reflected in the prayers to St. Augustine, St. Monica and other

saints revered by the Augustinian order. She also drew my attention to the number of works executed
by Michelino da Besozzo for Augustinian patrons and pointed me in the direction of the Libelli pre¬

THE PRAYER-BOOK OF MICHELINO DA BESOZZO

counselled that “they should not be read cursorily or quickly but little by little, with
attention and deep meditation. It is not intended that the reader should feel impelled
to read the whole, but only as much as will stir up the affections to prayer”.7

The practice of lectio divina or the prayerful reading of the Scriptures and spir¬
itual classics was an integral part of monastic life and both the texts and accompany¬
ing illumination in Michelino’s prayer-book preserve and foster this tradition.
Anselm’s own compositions are adapted or shortened to fit the overall shape of the
book. The prayer to St. Mary Magdalen (fols. 54-55), for example, comprises the
first two sections of Anselm’s long text (with the omission of a passage that refers to
the reader as male).8 It is given an introductory Versicle and Response and a more
definitively concluding sentence. The prayers in honour of Saints Peter, Paul and
Monica contain more fragmentary excerpts.9

The intense personal emotion that characterises these devotions finds a sym¬
pathetic counterpart in the illumination. Michelino’s all too human types with their
wistful, sometimes wizened faces and hunched, delicate bodies seem familiar with
life’s hardships, while the individualized flower borders, which frame both miniature
and text on the double-page openings for each prayer, echo and expand the senti¬
ments generated by the words and images. It is precisely this relationship on which
I wish to focus here by examining in detail some extracts from the prayers in the
context of their illumination.

A splendid border of huge gold-studded blooms delicately modelled in
ultramarine blue visually dominates the opening pages for the feast of The
Purification of the Virgin (fols. 12-14; Plate 4). In the miniature Mary’s robe takes
up the hue, while its silky green lining conforms to the rhythm of the border’s
leaves. In her blue garment, amongst blue flowers, Mary appears as the loveliest
flower of all, which is how the opening words of the prayer address her:

Flower of virgins, glory of heaven and earth, holy and ineffable Virgin
Mary, Mother of our Saviour, most holy in body, most chaste in
behaviour, most beautiful Virgin of all virgins, never defiled in heart or
mouth, wholly beautiful, wholly without stain! Inviolate Virgin, Virgin
inviolate in body and mind, you owe nothing to the law, because you are

7 See B. Ward, S.L.G., The Prayers and Meditations of St. Anselm with the Proslogion (London:
1973). Ward discusses the general influence of the liturgy and of Carolingien works on St. Anselm’s
prayers and cautions that they are ‘‘'only the ground on which his genius worked” (p. 43). She accepts
the nineteen prayers distinguished by Dom. A. Wilmart as the genuine work of St. Anselm (see Auteurs
spirituels et textes dévots du moyen âge latin (Paris: 1932) 162-201, and his introduction to Odo
Castel’s French translation, Les meditations et prières de S. Anselme (Paris: 1923) XI. See also a criti¬
cal edition of the prayers, Meditations and Prayers, Vol. 3, Letters, Vols. 3-5 Proslogion, Vol. 2, ed. F.
Schmitt).

8 Ward 201, “Most blessed Lady, I who am the most evil and sinful of men do not recall your sins
as a reproach, but call upon the boundless mercy by which they were blotted out...”