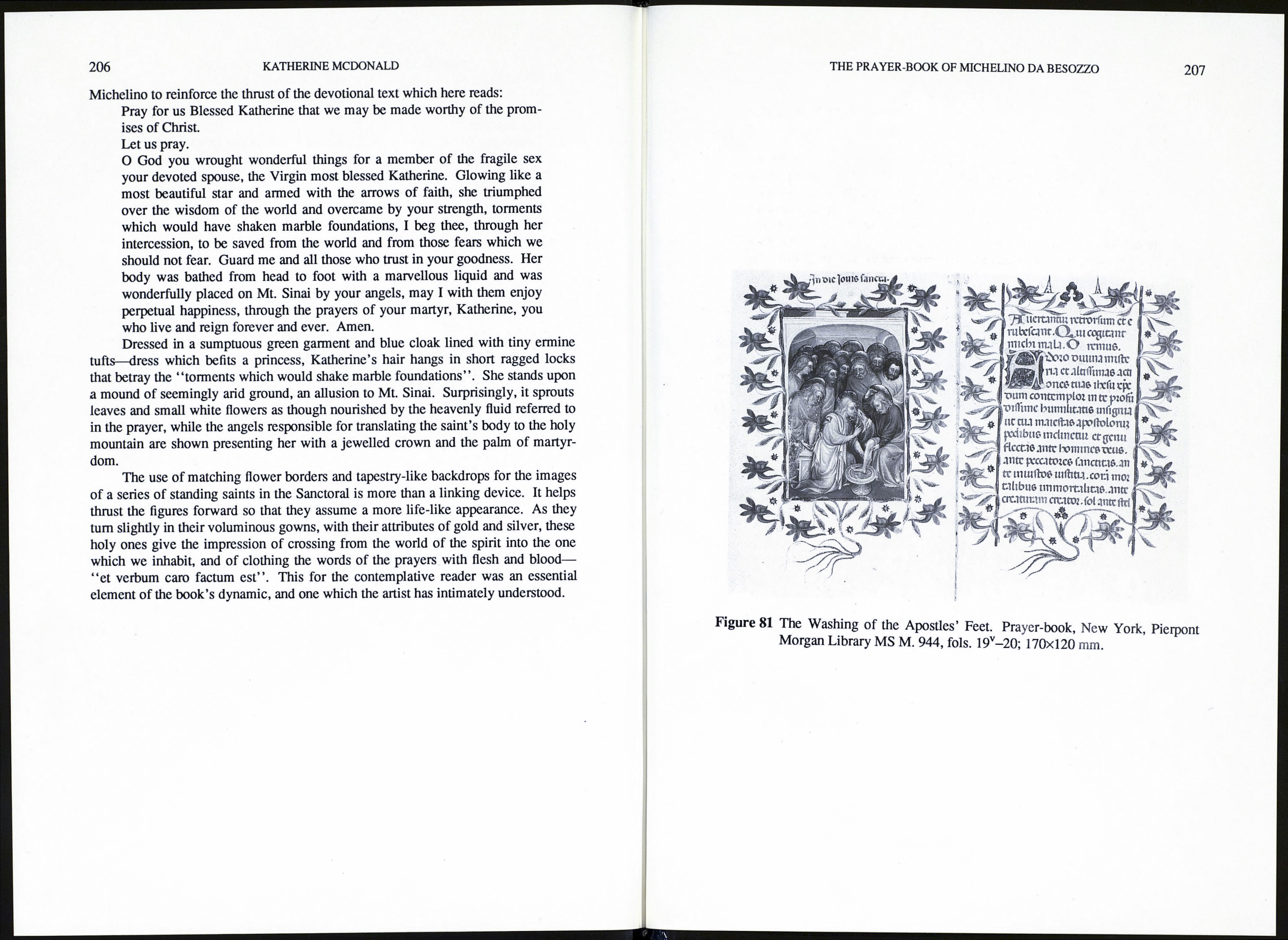 not tainted with any deviation.

The temple setting of the Purification, clearly expressed in the miniature
through the architectural frame and the altar table, is developed as the contemplative
focus of the prayer by means of repetition:

The prayer for The Washing of the Feet (fols. 20-20v; Figure 81) imagina¬
tively absorbs the reader into the solemn rite traditionally enacted within the celebra¬
tion of the Eucharist on Maundy Thursday. In developing the theme of adoration
and wonder at the Saviour’s humility, it plays on the image of the kneeling Christ,
the pivot also of Michelino’s painting:

I adore the divine mysteries and your highest actions, Jesus Christ, when
I contemplate such signal manifestation of your most profound humility,
as your great majesty bends over the feet of the apostles and God
genuflects before men...

The word “genuflects” or “kneeling” conjures up both the greatness of God
who is to be worshipped and the paradox of his performing, in the person of Christ,
such lowly service for the apostles—a paradox which is driven home in the prayer
by a series of contrasts which underline the difference between God and sinful man:
Holiness genuflects before sinners, Justice before the unjust, Creator
before the creature, Sun before the stars, Light before the darkness...

The poetry of the prayer expands beyond the immediate event of the Washing
of the Feet only to return to it with greater intensity and to the image of Christ
presented in the miniature:

...and you bend over washing, King of Kings, Lord of all Lords. There
can be no greater humility in any creature. I also contemplate you, Lamb
of God, Highest Priest and the true Pontiff who today handed over to
your disciples your flesh, a most pure Host, and your Blood to be eaten
and drunk at this noble supper...

Within such an evocative context details of the painting are also suggestive
beyond their immediate meaning. The striking vermilion red of the floor, for exam¬
ple, an unusual colour in the manuscript, aligned with the chalice-like basin of water,
visually echoes the allusion to Christ’s blood and the rite of Holy Communion.

The depiction of The Entombment and its border (fols. 24v-25; Figure 82)
takes on added poignancy as the accompaniment to a prayer which not only dwells
on Christ’s Burial but in which the suppliant also asks for a safe passage to eternity.

THE PRAYER-BOOK OF MICHELINO DA BESOZZO

It is as though the reader witnesses their death as well as Christ’s:

My flesh shall rest in hope. And you will not suffer corruption.

Lord Jesus Christ who suffered yourself to rest in the grave so that you
might bring us out of our graves and restore us to health with the glory of
your resurrection, hear my supplications and grant that at the end of this
frail life there may be quiet sleep for me in my tomb as you ordain and
that on the day of judgement with all the saints there may be a joyful
resurrection. Bind me to yourself completely, Lord, totally possess me
so that you permit no part of me to be absent from you, but live solely in
me and make me come to live in you alone who is the true God of glory.
Amen.

The shape of Christ’s body swathed in filmy raiment is reflected in the hor¬
izontal pods of the border which, coffin-like enclose bulging peas, while the black
centres of the blue flowers vertically positioned above each border pod seem to be
lifted heavenwards in the hope of “joyful resurrection”.

Another striking example of the power of the image to bring alive the sacred
Word occurs on the opening pages for the feast of The Ascension (fols. 35v-36; Fig¬
ure 83). Michelino heightens the viewer’s awareness of the spatial zone immedi¬
ately in front of the surface of the page by projecting Christ—and one of the
trumpets—into the upper border, so that he appears to hover outside the miniature,
while his diagonal elevation is echoed by the inclined placement of the lilac border
blossoms. Their tubular forms join the trumpets in heralding the Saviour’s departure
from this earth for heaven. Exultantly, the prayer emphasises the same upward
movement of body and spirit:

And the Lord with voice of the trumpet.

May my prayer ascend to you, Christ, may the prayer of my mouth, God,
enter into your sight, may my pleading reach you Lord who today as a
conqueror ascends above all the heavens and who, having conquered the
power of death, bore away the spoils of the human race, from whence
you came...

The sense of weightlessness created by the border flowers, by Christ and by the
disciples—whose feet seem to be unwillingly anchored to the ground—is further
accentuated by the burnished gold roots at the bottom of the page which, as Eisler
aptly puts it “appear to have pulled themselves from the sheltering earth permitting
the illuminated page and its prayer to rise”.10

Prayer and miniature for the feast of St. Katherine (fols. 83v-84; Figure 84)
demonstrate how the conventional iconic image of the standing saint is also used by