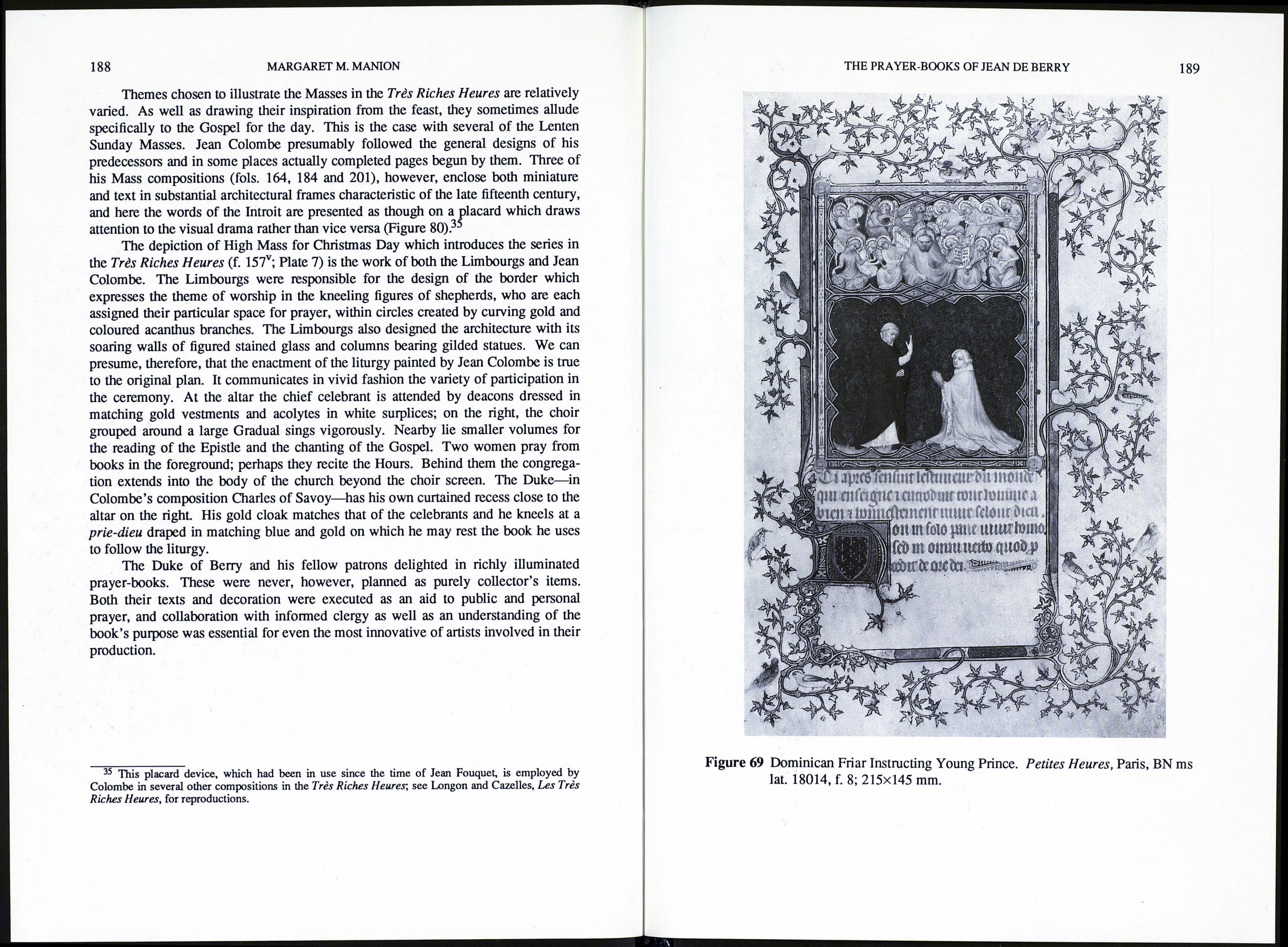 opening pages of the solemn Canon Prayer, the most common subject being a
Crucifixion, often paired with a page depicting the Maiestas theme.27

Once the Missal texts were appropriated for lay use the relationship between
text and decoration was susceptible to much greater variation, since the lay user was
not constrained to read at a regulated pace. Thus in the Très Belles Heures the
decoration for each of the pages introducing the Masses is of the same format as
those for the other sections of the book, and these as we have already observed con¬
tain a considerably detailed programme which integrates miniature, historiated initial
and bas-de-page (Figure 76).28

The two Books of Hours illuminated for the Duke of Berry in the early
fifteenth century by the Limbourg Brothers also contain Masses. Those of the Belles
Heures с. 1409 have a series from the Temporal for Christmas, Easter, Ascension,
Pentecost, Trinity Sunday and Corpus Christi together with the Mass for the Exalta¬
tion of the Cross and a votive Mass of the Virgin (fols. 195-209). The sequence
continues after a set of miniatures in honour of St. John the Baptist illustrating
extracts from the text of the Golden Legend, with Masses for the feasts of the Bap¬
tist, Saints Peter and Paul, All Saints and All Souls, which also serves as a votive
Mass for the Dead (fols. 212v-221).29

The visual presentation of the introductory pages of these Masses varies con¬
siderably. The first group on fols. 195-209 follows the format of a small miniature
above the Introit, with the text divided into two columns and decorated initials and
rubrics clearly signalling particular prayers and the abbreviated texts for the Ordi¬
nary of the Mass—the Kyrie eleison, Gloria, Agnus Dei, etc.30 The Masses that fol¬
low the excerpts from the Golden Legend, on the other hand, are introduced by com¬
positions that harmonise with the decoration of the Legend (Figures 77 and 78).
Large miniatures with dramatic scenes of the Baptist’s martyrdom, the death of
Simon Magus, and the beheading of St. Paul, dominate the pages and visually con¬
tinue the story of the saints. Indeed the Introit for the Mass of Saints Peter and Paul
is extended over two pages (f. 215—215V) with a large miniature heading the four
lines of text on each. The Mass for All Saints (f. 218) is presented as the climax of
the combined Sanctoral section with the Virgin in rich blue holding the Christ Child
as the radiant centre around which are grouped the assembly of saints, while God the
Father and the Holy Spirit hover above. The Mass for All Souls (f. 221) has a more

28 This is not to say that elaborate illustrative programmes are absent from clerical Missals. Several
of the contributors to this volume are currently researching the range and variety of fourteenth- and
fifteenth-century Missal illumination, and the articles by V. Condon and V. Vines discuss examples of
very distinctive programmes. Works such as the Missal of Saint Denis also demonstrate the applica¬
tion of related miniature and border unit to this genre. Nevertheless, research to date points to a greater
freedom in manipulating the relationship of text to illustration in books not destined for use by the cele¬
brant and which comprised both personal and liturgical prayer.

30 See Meiss and Beatson for facsimile reproduction of these folios.

subdued colour scheme, and in place of the drama of martyrdom, an oblique view is
provided of the interior of a chapel where mourners follow the service of the dead
from their open books. Before them is set a draped coffin under the burning candles
of a chapelle ardente. This scene is modelled on a familiar pattem often used for the
Vigils of the Dead and its size, once again, affects the format of the opening words
of the Introit so that the page forms part of a visual sequence both with the preceding
miniatures and with that of the concluding prayer for a safe journey.

It is often observed that the Très Riches Heures is an exceptional work and that
it should not be interpreted as a typical Book of Hours. Nevertheless, it must not be
forgotten that its lavish and splendid decoration is based on a compilation of texts
which are no less devotional than those of the Duke’s older prayer-books. Many
aspects reveal the contribution of his chaplains or theological advisers with whom
the Limbourgs must have worked as closely as did Jean Pucelle and Jean le Noir
with their predecessors at the royal court.31

I single out here the extensive Mass cycle whose decoration was planned and
begun by the Limbourg Brothers c. 1411-1416, when the book was written, but
which was not completed until c. 1485-89. By that time the work had passed into
the possession of Charles I of Savoy, who employed Jean Colombe to finish it.

The series of Masses from the Temporal includes as well as those in the Belles
Heures a Lenten sequence, which comprises the first four Sundays in Lent, Passion
Sunday and Palm Sunday. The Masses drawn from the Sanctoral, in addition to
those in the Belles Heures, are for the feasts of the Assumption, St. Michael, the
Vigil of Saint Andrew and possibly the Purification. The series for the Sundays in
Lent does not appear in earlier extant books of the Duke or his close family. They
do feature, however, in a Franciscan Missal-Hours of Lombard work, BN ms
lat. 757, which has been dated c. 1390. This book belongs to a group of North
Italian Missal-Hours produced around the turn of the century.32 Both the Duke and
the Limbourgs had close associations with this region, and the selection of Masses
for the Très Riches Heures may well have been influenced from this quarter.33

In the Très Riches Heures the small-sized miniature at the head of the Introit is
maintained for some Masses, but the majority are introduced by large-scale compo¬
sitions, with four lines of the Introit text being presented in the same way as the
opening words of the Book’s Offices and other major sections (Figure 79). The
Limbourgs also characteristically vary the shape of the frames of their miniatures
and the designs of the border decoration, so that the pages are presented as indivi¬
dual pictorial units as well as part of a sequence.34

33 The unusual illustrations of the Litany of the Saints in the Très Riches Heures for example have a
precedent in BN ms lat. 757.

34 See Longon and Cazelles, Les Très Riches Heures, for facsimile reproductions which show the
range and variety of shapes, frames and borders.