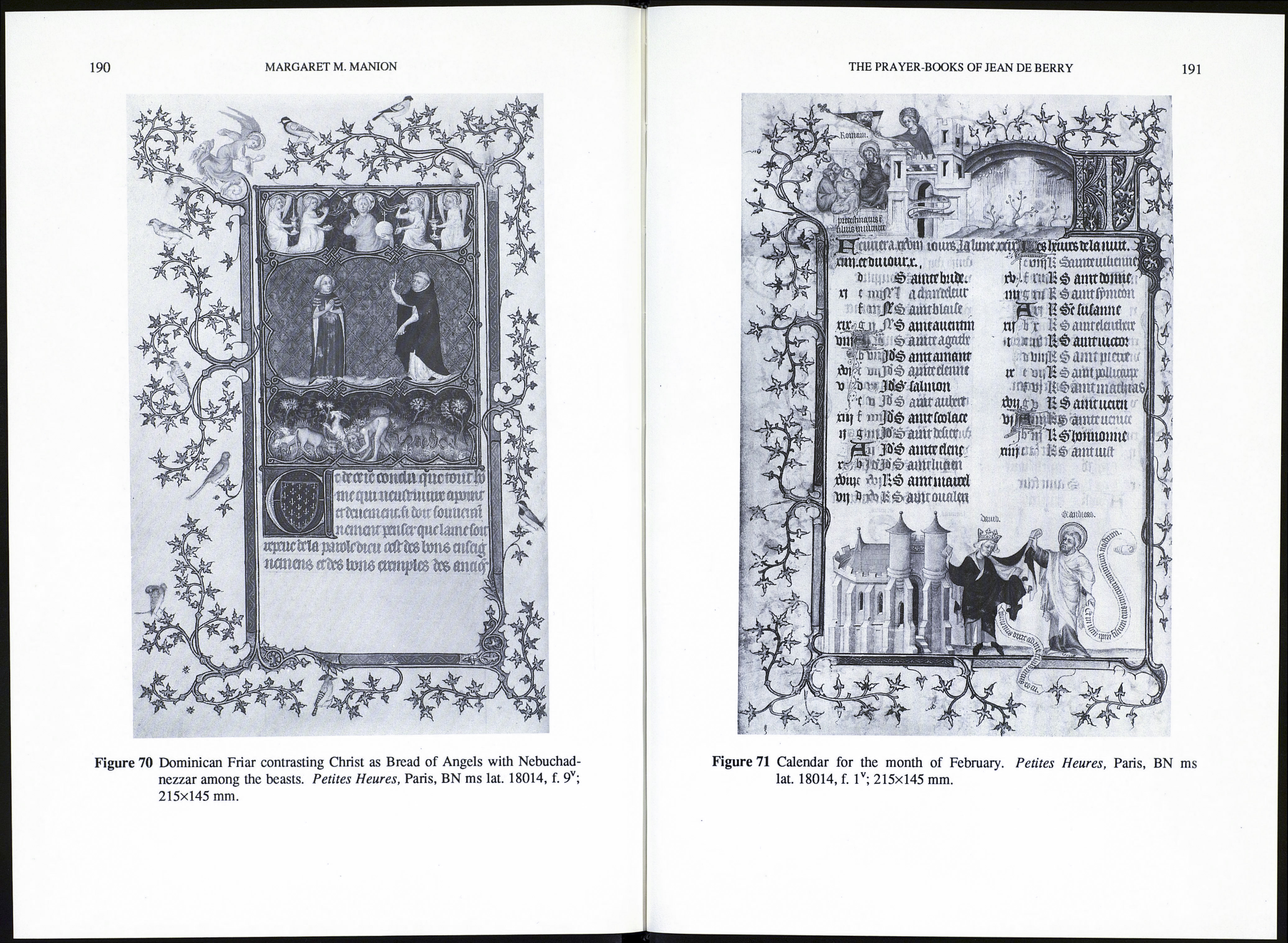 Themes chosen to illustrate the Masses in the Très Riches Heures are relatively
varied. As well as drawing their inspiration from the feast, they sometimes allude
specifically to the Gospel for the day. This is the case with several of the Lenten
Sunday Masses. Jean Colombe presumably followed the general designs of his
predecessors and in some places actually completed pages begun by them. Three of
his Mass compositions (fols. 164, 184 and 201), however, enclose both miniature
and text in substantial architectural frames characteristic of the late fifteenth century,
and here the words of the Introit are presented as though on a placard which draws
attention to the visual drama rather than vice versa (Figure 80).35

The depiction of High Mass for Christmas Day which introduces the series in
the Très Riches Heures (f. 157v; Plate 7) is the work of both the Limbourgs and Jean
Colombe. The Limbourgs were responsible for the design of the border which
expresses the theme of worship in the kneeling figures of shepherds, who are each
assigned their particular space for prayer, within circles created by curving gold and
coloured acanthus branches. The Limbourgs also designed the architecture with its
soaring walls of figured stained glass and columns bearing gilded statues. We can
presume, therefore, that the enactment of the liturgy painted by Jean Colombe is true
to the original plan. It communicates in vivid fashion the variety of participation in
the ceremony. At the altar the chief celebrant is attended by deacons dressed in
matching gold vestments and acolytes in white surplices; on the right, the choir
grouped around a large Gradual sings vigorously. Nearby lie smaller volumes for
the reading of the Epistle and the chanting of the Gospel. Two women pray from
books in the foreground; perhaps they recite the Hours. Behind them the congrega¬
tion extends into the body of the church beyond the choir screen. The Duke—in
Colombe’s composition Charles of Savoy—has his own curtained recess close to the
altar on the right. His gold cloak matches that of the celebrants and he kneels at a
prie-dieu draped in matching blue and gold on which he may rest the book he uses
to follow the liturgy.

The Duke of Berry and his fellow patrons delighted in richly illuminated
prayer-books. These were never, however, planned as purely collector’s items.
Both their texts and decoration were executed as an aid to public and personal
prayer, and collaboration with informed clergy as well as an understanding of the
book’s purpose was essential for even the most innovative of artists involved in their
production.

35 This placard device, which had been in use since the time of Jean Fouquet, is employed by
Colombe in several other compositions in the Très Riches Heures; see Longon and Cazelles, Les Très
Riches Heures, for reproductions.