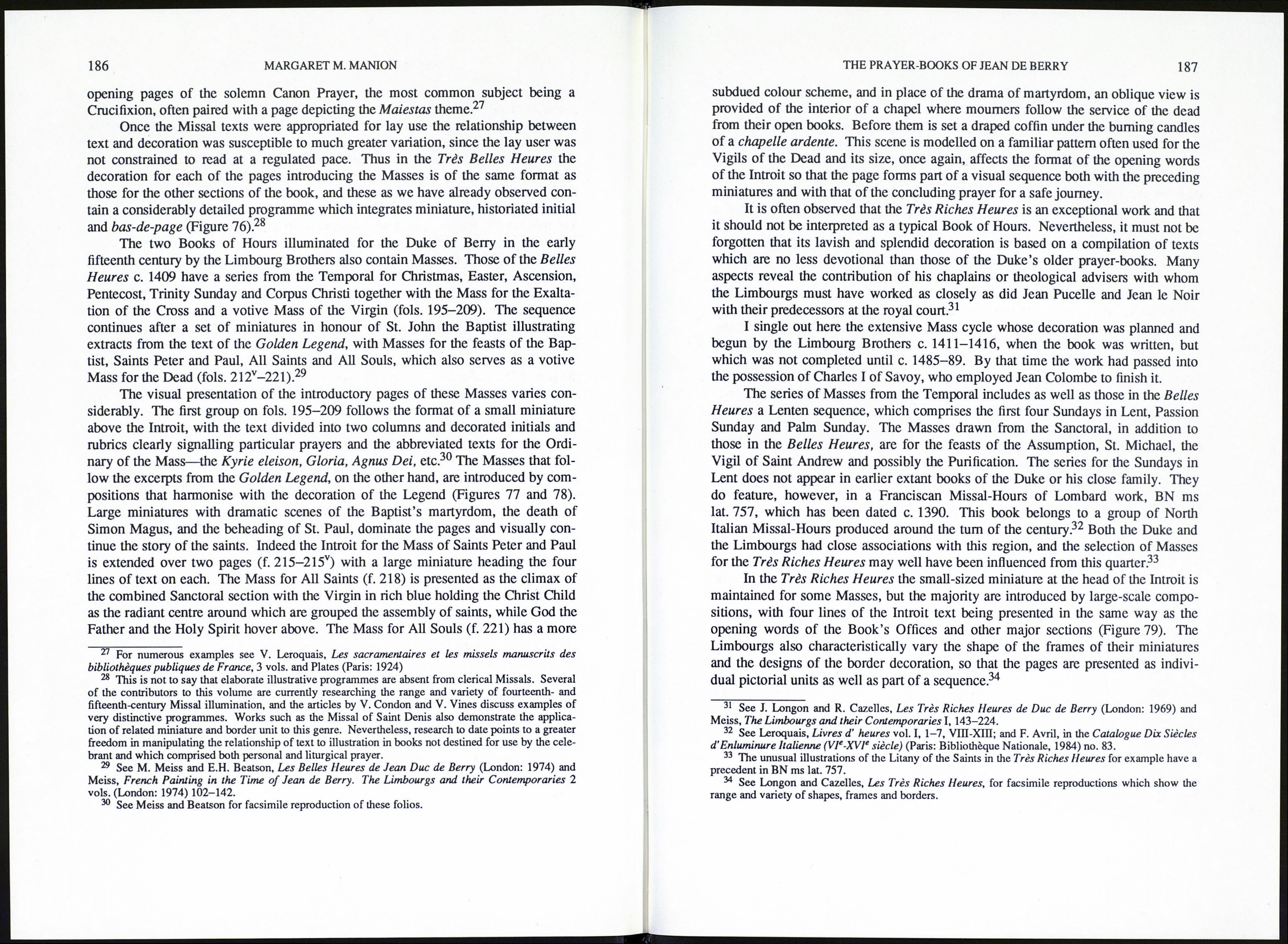 quaesumus...which follows it, or the Domine non sum dignus are prescribed to be
said (silently) with the priest. Latin prayers in honour of the Body of Christ are also
designated for silent recital, while a series of prayers in the vernacular expand the
sentiments appropriate for particular parts of the Mass. Provision is made for
including the names of one’s choice at the commemoration of the living and of the
dead, and in the prayers before Communion the aid of the angels and saints is
invoked with special reference to Saint John the Baptist and Saints Peter and Paul.

The kneeling prince who figures prominently in all the miniatures clearly is to
be identified with the lay user of the book—the Duke himself. The artist responsible
for this series of miniatures in the Petites Heures has been identified as a collabora¬
tor of Jacquemart d’Hesdin—the Pseudo-Jacquemart, who was involved in the
second campaign (c. 1385-1390).20 The interrelated text and image sequence,
nevertheless, reveals the same precise theological and devotional articulation as that
which characterises the Calendar and Psalter of the Belleville Breviary. Like the
Calendar, the Mass prayers and miniatures formed a unit which was copied or
adapted for more than one member of the royal family. The close nexus between
text and illumination and their explicit devotional function suggest the guiding hand
of a cleric concerned with the education of the royal family in an affective and
quasi-liturgical appreciation of the Mass.

Following the text of the Ordinary of the Mass and of the Proper—that is,
Introit, Gradual and Communion verses, Epistle and Gospel readings and the prayers
of Collect and Post Communion—implies a liturgical awareness on the part of the
laity which transcends purely private devotion. In the Middle Ages and indeed until
the liturgical reforms of the Church Council, Vatican II (1963-65), both ways of
sharing in the Mass were acceptable. Liturgical involvement, however, required
more specialised knowledge, and was dependent, to a large degree, on the availabilty
of the texts of the Propers, as well as those of the Ordinary or unvarying setting of
the Mass—the Kyrie, Gloria, Credo, Agnus Dei, etc. Full liturgical participation,
moreover, was usually associated with the celebration of solemn or High Mass in a
public church or chapel, with many of the texts being sung by the choir and the chief
celebrant being assisted by deacons as well as acolytes.

Books for members of the laity containing only the texts for liturgical partici¬
pation in the Mass—lay Missals—are rare before printing. Many Books of Hours,
however, contain one or more votive Masses, often in honour of the Virgin. In
Italian Books of Hours votive Masses of the Virgin become standard practice from
the late fourteenth century, and this section is regularly signalled by major illumina¬
tion.

It is understandable that appropriate texts would be provided for French royalty
and related nobility of this period to enable them to participate meaningfully in the
religious ceremonies which were such an important part of their regular schedule.
The words of the chronicler from the reign of Charles VI, for example, provide a
contemporary affirmation of the Duke of Berry’s commitment to attendance at such

Animated always by an ardent devotion to the service of God, he main¬
tained in his home many chaplains who day and night sang the praises of
God and celebrated mass, and he took care to compliment them whenever
the service lasted longer or was more elaborate than usual.21

Nor is it surprising that the selection of Masses appended to Books of Hours
for the use of members of the French royal family was based on those whose impor¬
tance was often highlighted by rubrication or decoration in Parisian Missals made
for the use of clerics. Since Pucelle and le Noir were experienced in the illumination
of such works, they and their followers had precedents to turn to for their execution
of Mass texts for lay patrons.22

Three of the prayer-books commissioned by the Duke of Berry contain sub¬
stantial sequences of illuminated Mass texts which seem to take their origins from a
royal family tradition.23

The Très Belles Heures has a series of Masses for the major feasts of the
Church’s Temporal Cycle: Advent, Christmas, Epiphany, the Purification, Holy
Week, Easter, Ascension, Pentecost, Trinity Sunday and Corpus Christi, together
with a selection from the Sanctoral: St. John the Baptist, St. Peter, the Assumption,
the Nativity of the Virgin, St. Michael, the Angels, St. Hilary, All Saints, All Souls,
votive Masses of the Holy Cross and of the Virgin, the Vigil of St. Andrew and the
feast of St. Andrew. All the Masses, from both the Temporal and Sanctoral cycles,
are arranged in sequence so that the whole selection covers chronologically the
Church’s year and all are illuminated.24

A very similar series appears in the Grandes Heures de Philippe le Hardi.
This book also contains votive Masses for each day of the week, that are specifically
associated with a royal chapel.25 The latter group feature as well in the additions
made for Charles V to The Hours of Blanche of Savoy?6 In both these manuscripts
the master in charge of the illumination seems to have been Jean le Noir.

The hierarchical grading in liturgical terms of feasts in the Church’s Calendar
had long been translated into decorative language in many clerical Missals. Particu¬
larly important Masses were often singled out by the use of introductory historiated
initials or small miniatures. Full-page illuminations were normally confined to the

23 Meiss (I, 109) is incorrect when he says that a sequence of Masses also appears in the Petites
Heures.