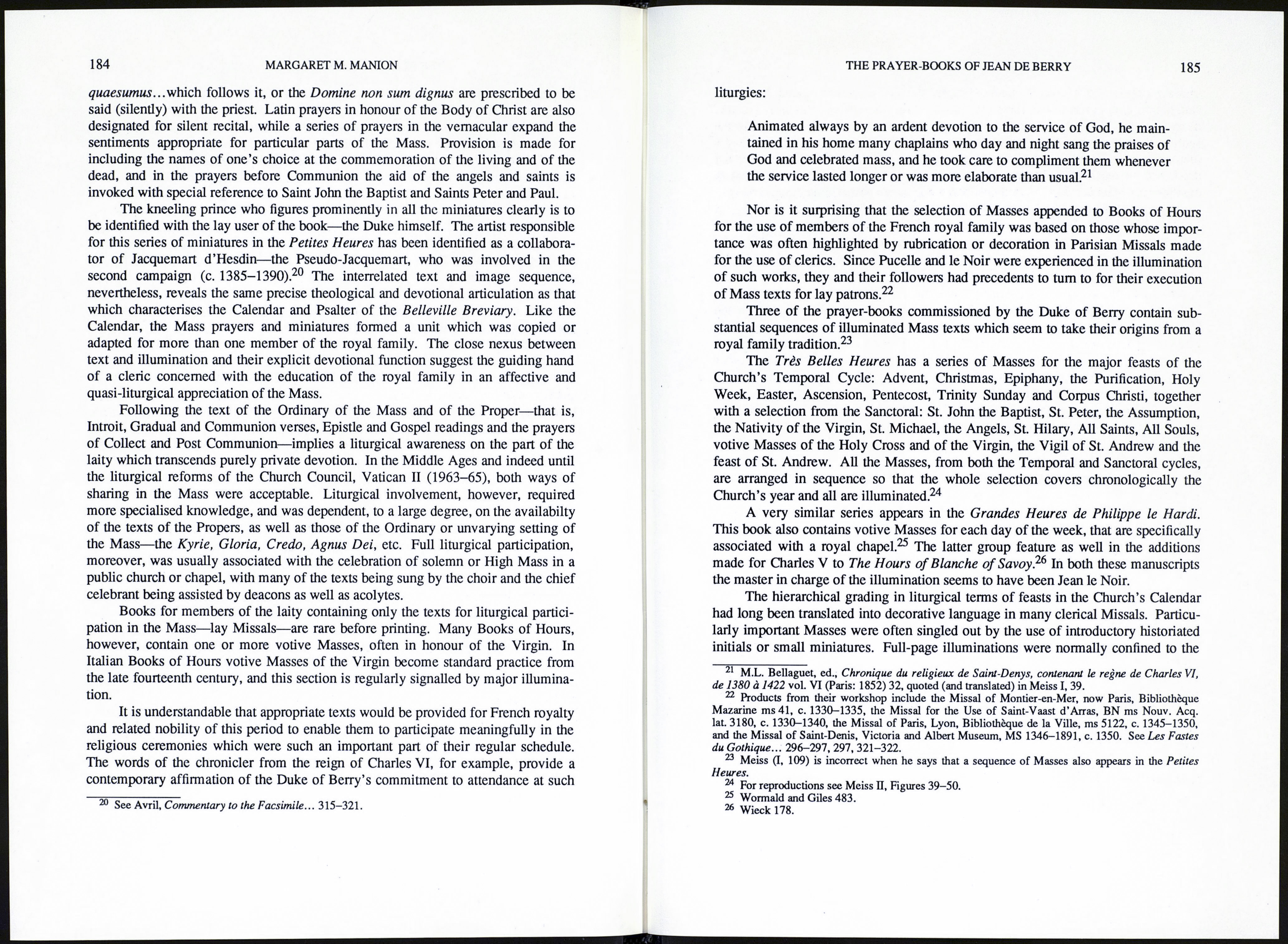 The privileged nature of the Hours of the Virgin in Books of Hours has long
been acknowledged. Both the focus of the most elaborate decoration on this section
and the fact that the Book of Hours takes its popular name from this source are clear
indications of its importance. Instructions such as those we have mentioned in the
Petites Heures, prescribe the daily recitation of this Office; and the devotion could
be performed in a variety of ways. The Hours could be recited in private or with
one’s chaplain and family. Sometimes the female and male members joined
together, at other times they prayed separately. On special feasts, these prayer gath¬
erings could include a larger and more varied representation of the household. Other
Offices in Books of Hours were also regularly recited, either on particular days of
the week, on feast days or during the appropriate liturgical season. The Hours in
honour of the Passion or of the Cross and the Vigils or Office of the Dead, held an
especially favoured place in devotional life, a fact which is underlined by the degree
of illumination which their texts proportionately attract over the life of the Book of
Hours. Devotions such as the Penitential Psalms and the Litanies were also suitable
for particular occasions or to foster an appropriate affective frame of mind. Together
with time-honoured prayers to the Virgin and a host of suffrages in honour of the
saints or more personal prayers directed towards particular needs or cults, they could
be incorporated into domestic prayer services or be recited privately.17

The wealth of such material and the demand for Books of Hours confirm that
communal and private prayer formed a substantial part of daily life; but where, one
may ask, did attendance at Mass fit in this devotional schema? It is here that the
Duke of Berry’s prayer-books are particularly informative. The precepts in the
Petites Heures, we have said, exhort the princely leader to attend Mass daily. In fact
noble men and women often heard more than one Mass a day. The liturgy might be
performed at the start of the day in the presence of the head of the house virtually for
his or her private devotion. Later, especially on major feast days and Sundays, a
more public service would be held in which musicians and choir played an important
part.

The private Mass was viewed as a sacred ritual which when attended with
appropriate spiritual dispositions brought its own blessings. It was not necessary to
participate in the liturgy with the priest; one might simply recite favourite prayers
during its celebration. These could include the Hours of the Virgin or various
offices. Many other prayers and devotions in Books of Hours were also considered
suitable for recitation at Mass, for example those in honour of the Body of Christ
and of the Cross, those commemorating particular saints and those for special needs.
For since the Mass was interpreted as the sacred re-enactment of Christ’s redemptive
sacrifice, calls for rescue or help were rightly made in its context. Moreover, the
Mystical Union of the faithful in the community of the Church was often interpreted
as an extension of specific family and clan ties; thus local or favourite saints were

17 For the variety of devotions in Books of Hours and some examples of their use see J. Harthan,
Books of Hours (London: 1982): especially 32-33; and also R.S. Wieck, Time Sanctified. The Book of
Hours in Medieval Art and Life (New York: 1988).

viewed as special advocates. Honouring them at Mass guaranteed their support in
life’s daily challenges and conflicts.18

An understanding of the importance of this personal and localising element in
medieval spirituality helps to clarify the relationship of the Book of Hours to the
Mass. Often, too, among its pages there are specific prayers to be said at those
points of the Mass which engage a personal act of faith or commitment—at the
elevation of the Host, for example, or before or after Communion.

A unity of place is established for the pictorial sequence by the use of a similar
setting of curtained recess set against a patterned background for each scene (Fig¬
ures 74 and 75). This also indicates a relatively private space for prayer. Constant
actors throughout the series are the priest at a simple altar table and the prince who
kneels at a draped prie-dieu with prayer-book open before him. The celebrant is
normally accompanied by one assistant, and the cast is expanded to include cantors,
additional acolytes or clerical attendants where appropriate, as at the Introit, the
chanting of the Gospel and the distribution of Holy Communion. In the Commun¬
ion scene the prince is accompanied by male and female members of his family.
The miniatures, therefore, do not represent a specific occasion, but rather provide an
imaginative reference to the context in which these prayers are to be recited, a con¬
text which had a considerable range of daily application. But these images commun¬
icate something more. If we follow them with the text, we find that they explicate
the Mass in a complementary way to the prayers. The rubrics indicate how the
prayers are to be recited in between, as it were, the major actions of the liturgical
celebration while the pictures, for the most part, register the actions themselves.

Thus, the chanting of the Introit and of the Gospel, the Offertory donation, the
Elevation of the Host, the Kiss of Peace and the distribution of Communion are the
visual signposts for the lay participant who makes his way through the ritual by
reciting a series of prayers which take their inspiration from the ordinary of the Mass
and are interwoven with it. Some of the sections common to the priest and the choir
such as the Sanctus and Agnus Dei, or familiar to the laity because of their being
recited aloud by the celebrant like the Pater Noster and the prayer Libera nos