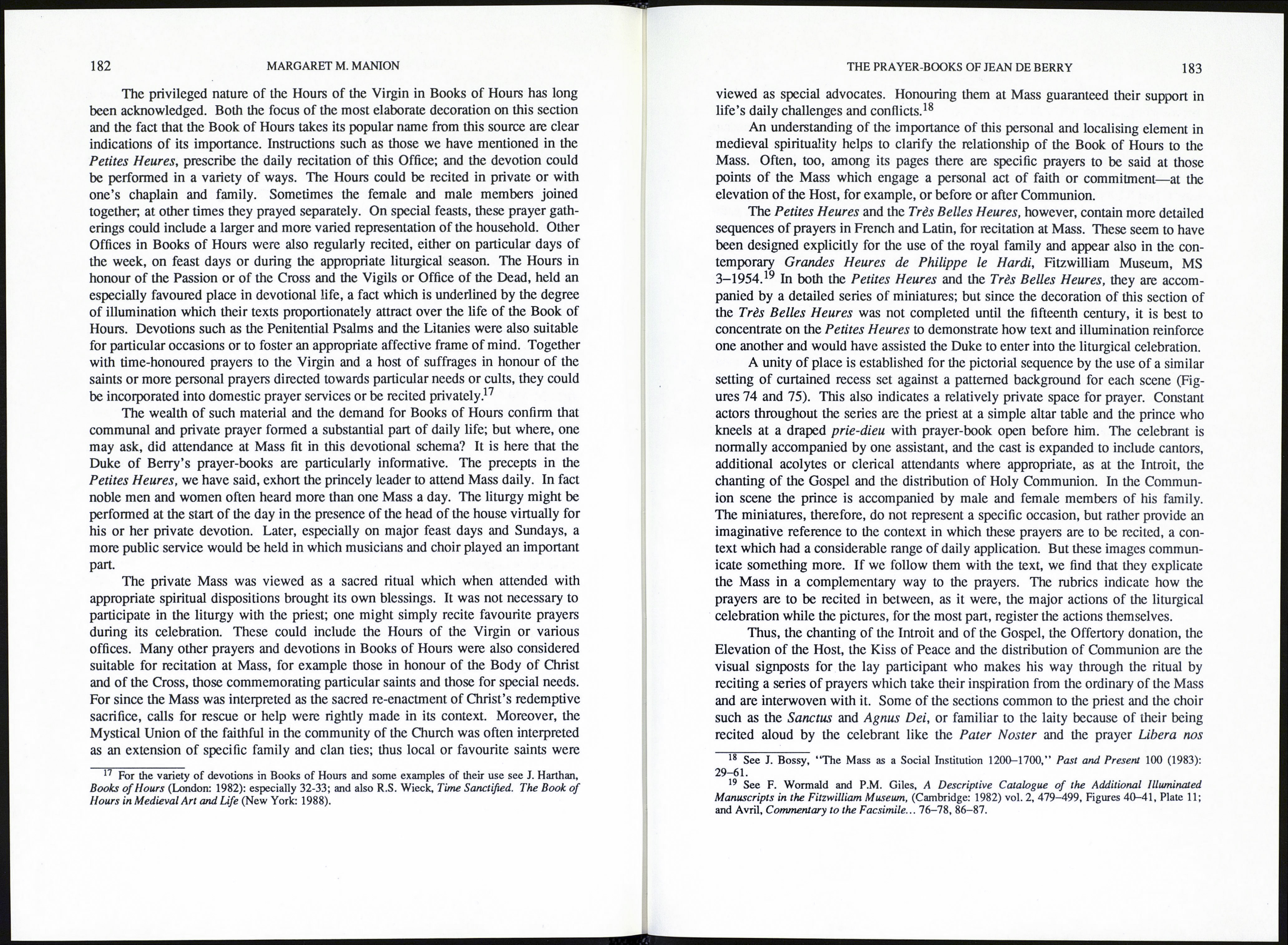 (1323-1326).11 In the upper and lower margins of its pages, the theme of the pas¬
sage of time explicit in the Calendar text itself, is elaborated to embrace Salvation
History. Below, in the bas-de-page, pairs of prophets and apostles enact the transi¬
tion from the Old to the New Dispensation. Each apostle makes a literal gesture of
revelation as he draws aside the cloak of his Old Testament predecessor to disclose
the book which he holds. The prophets, for their part, assist in the transition from
one era to another by dismantling, stone by stone, the edifice which symbolises the
Synagogue to make way for the Church. By December the structure which appeared
impressively solid at the beginning of the year is in ruins.

Scrolls linked to the figures elaborate these themes of transmission, revelation
and transformation. Appropriate verses from the works of the prophets are changed
into an article of faith from the Creed traditionally assigned to a particular apostle. In
the upper margin, the scheme is further developed. Mary, through whom the human
race gains access to Paradise, stands above the gates leading to the New Jerusalem.
Her pennant for each month displays a representation of an article from the Creed.
These pennants were originally designed to parallel the verses on the scrolls of the
apostles below. At her feet appears Saint Paul, the apostle “bom out of due time”.
January depicts his conversion while subsequent months show him addressing the
audiences of his Epistles—the Romans, Corinthians, Galatians, etc. Citations from
these writings provide in their turn an explication of the scenes on the Virgin’s pen¬
nants.12

Although the Belleville Breviary was not commissioned for a member of the
royal family it seems to have come into the possession of Philippe VI de Valois
shortly after 1343 and is listed in the inventory of Charles V in 1380. The detailed
decorative programme of both the Calendar and of the liturgical divisions of the
Psalter is explained in a contemporary French commentary attached to the Breviary.
The intent of the imagery must have been understood early in royal circles since the
Calendar was adopted independently of the commentary for several of their family
prayer-books.13 It did not, however, become a “workshop pattem” for indiscrim¬
inate use outside this milieu.

12 Avril has shown how this very detailed and elaborate interweaving of visual and textual com¬
mentaries has become somewhat confused in the Petites Heures where the order of prophets and apos¬
tles in the lower margin and the verses on their scrolls differ from those in the Belleville Breviary,
although the images on the pennants held by the Virgin still follow the Breviary order. Thus the two
fail to match. He suggests that this may be because in a lost intermediary model the scrolls had not
contained identifying verses and the cleric involved in the design of the Calendar for the Petites Heures
had turned to an alternative system disseminated through the thirteenth century Speculum Theologie by
the Franciscan Jean de Metz. He had failed to see, however, that the upper register was altered accord¬
ingly (Avril, Commentary to the Facsimile... 208-222). The main message is nevertheless clear, and
even such inconsistencies reveal continuing clerical and artistic interaction.

The Dominicans were a powerful influence in medieval Paris. They were
closely associated with the University and hence with book production, and they
also had strong links with royalty, providing chaplains and confessors not only for
the king’s household but also for other members of the Valois and related houses,
including the Duke of Berry.14 Works such as the Belleville Breviary suggest that
Jean Pucelle, the leading Parisian illuminator of the early fourteenth century, worked
extremely closely with them to produce the detailed and highly organised visual pro¬
grammes used to decorate and elucidate the texts destined for prayerful use in royal
and noble establishments. Under Pucelle and his immediate followers, foremost of
whom was Jean le Noir, miniature, historiated initial and marginal scenes especially
those of the bas-de-page, were often integrated into a visual commentary of typolog¬
ical or theological significance. The love of drolleries and whimsicality for their
own sake, however, was never completely abandoned.15

The Duke, in due course, was to acquire several books by Pucelle, including
the Belleville Breviary, but the illuminators responsible for the Petites Heures and
the Très Belles Heures were already inheritors of the Pucelle tradition. In both
works the pictorial programme integrates miniature, initial and bas-de-page. In the
Petites Heures this system marks such major divisions as the Hours of the Passion
and the Penitential Psalms, while the introduction to the Hours of the Virgin is
dramatically signalled as the heart of the book by the use of an architectural frame to
enclose the miniature of the Annunciation together with the opening words of the
text and an historiated initial of the Duke at prayer (Figure 72). This frame is
comprised of Gothic niches peopled with the twelve apostles, the prophet Jeremiah,
and an image of the Man of Sorrows flanked by the Virgin and Child and John the
Baptist. Placed under the Annunciation and the surmounting image of the Man of
Sorrows, the prophet announces the great theme of Salvation History. This encom¬
passes the foreshadowings of the Old Testament, the redemptive life and death of
Christ and the witness of the Apostolic Church. Such is the comprehensive nature of
the context established for the recitation of the Hours of the Virgin. The theme of
the prophets as a type or foreshadowing of apostolic leadership in the New Dispen¬
sation is presented in a variety of ways in works of art commissioned by the Duke
and it was an important element in contemporary Christian teaching.16

In the Très Belles Heures, the integration of miniature, initial and bas-de-page
into one consistent and informative unit, of substantial theological or Scriptural
complexity, dominates the visual organisation of the whole book (Figure 73). This
extensive programme was clearly planned in toto from the outset, and it was care¬
fully followed in the long-drawn out decoration of the work.

14 For the close association of the Dominicans with the French Royal House and for their involve¬
ment in book production in Paris, see R. Branner, Manuscript Painting in Paris during the Reign of
Saint Louis (Berkeley: 1977) and W.A. Hinnebusch O.P., The History of the Dominican Order vol. 1
(New York: 1966).

15 In addition to the Petites Heures and the Très Belles Heures, examples of this integrated system
appear in The Missal of St. Denis (Avril, Les Fastes du Gothique note 273), The Breviary of Charles V
(Avril note 287), and The Bible of Jean de Sy (Avril, note 280).