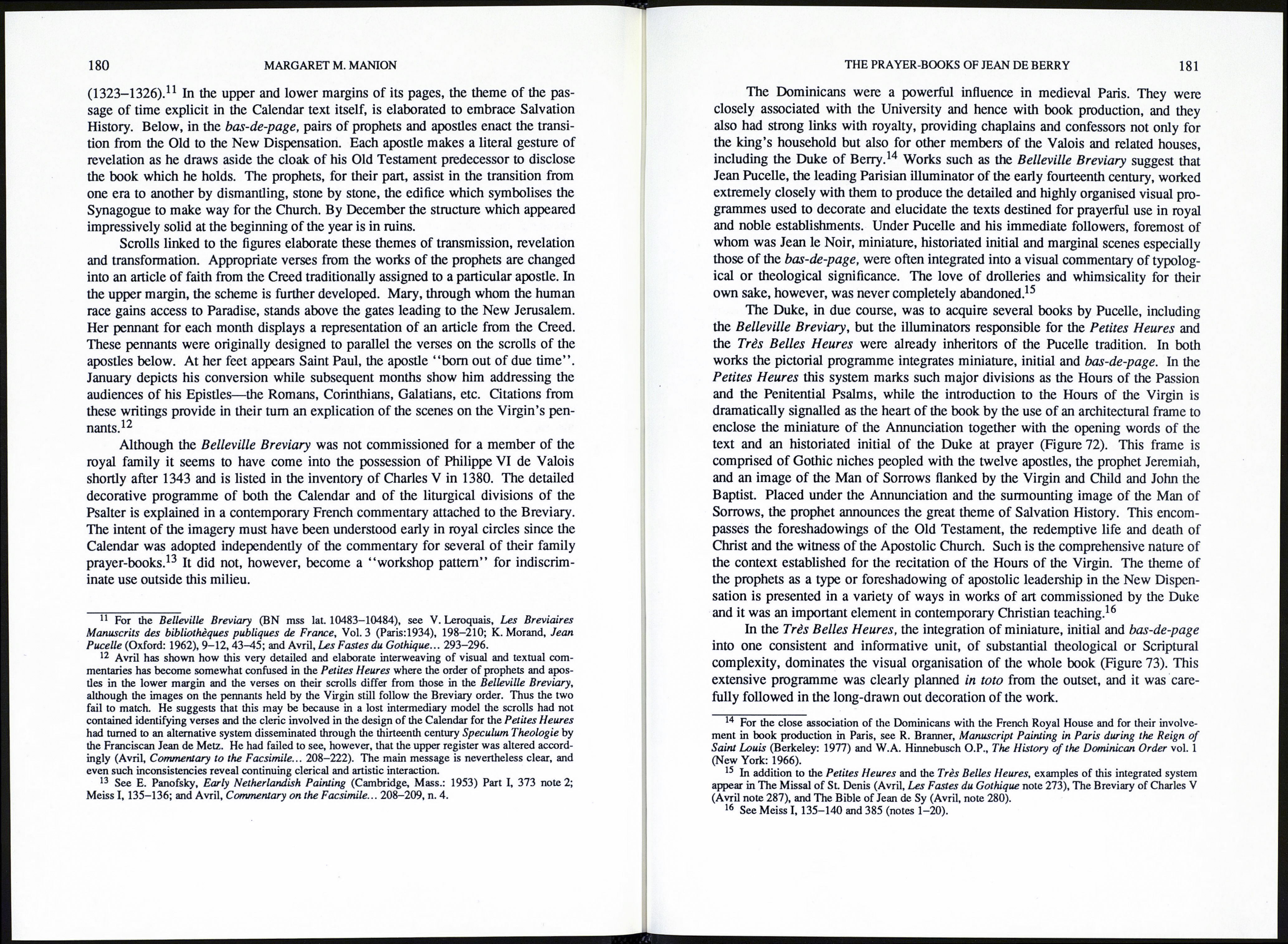 ateliers, or on the significance of the Duke as artistic patron and dedicated
bibliophile.3 Even more fundamental for an appreciation of these works, is the fact
that they were primarily designed for devotional use. As such they bear the marks of
long-established family customs. Not only do they elucidate the interaction between
the development of official liturgical practice and more personal religious expres¬
sion, but their artistic dynamic is dependent to a very large extent on the integration
of text and imagery, while the relationship between clerical adviser or text-compiler
and artist-illuminator was of critical importance in their production.

This is a large subject. Only a few facets of the rich material in the Duke’s
prayer-books are discussed here to demonstrate the value of studying such works
with reference to their devotional purpose.

Among the oldest of the known extant Books of Hours recorded in the Duke’s
inventories is the Petites Heures (215x145mm), now Paris, BN ms lat. 18014, which
seems to have been designed and written in the early 1370s. Its illumination was
begun at this time by Jean le Noir; but it was interrupted around 1375, perhaps by
the death of the artist, and completed in a second campaign under the direction of
Jacquemart d’Hesdin с. 1385-1390.4

In addition to the elements usually to be found in a Book of Hours—the Hours
of the Virgin, Penitential Psalms, Litany, Office of the Dead, etc.—the Petites
Heures contains a substantial group of more distinctive prayers and Offices, many of
which also occur in the Très Belles Heures, which was probably designed and writ¬
ten about the same time although its illumination spans some forty years.5 The
Duke’s inventory indicates that the model for these particular texts was available in a
Book of Hours that had belonged to King Jean le Bon, father of Jean and Philippe,
and from which the king had learnt to read as a child.6 Through it or another like it

5 The Master of the ‘Parement de Narbonne’ began the illumination of the Très Belles Heures de
Notre Dame de Jean de Berry (here called the Très Belles Heures), at the time the book was written,
and it was continued by the Baptism and Holy Ghost Masters c. 1404, after which the book was split
up and the completed section given by the Duke to the keeper of his inventory. Robinet d’Estampes
(BN ms n.a. lat. 3093). Two paintings were executed by the Limbourg Brothers c. 1412. The illumi¬
nation of the second section was not finished until c. 1422, by which time it had found its way to the
Dutch court. Flemish or Dutch artists carried out the decorative programme on what now goes by the
name The Turin-Milan Hours. One part of this second section was destroyed by fire in 1904. Despite
the extended and interrupted nature of the book’s decoration, the original integrated plan for text and il¬
lumination was adhered to throughout. See P. Durrieu, Les Heures de Turin (Paris: 1902; rev. ed. by A.
Chalelet, 1967); G. Hulin de Loo, Les Heures de Milan (Brussels:1911); P. Durrieu, Les Très Belles
Heures de Notre Dame du Duc de Berry (Paris: 1922). For more recent discussion of dates and attribu¬
tions, see also Meiss, I, 107-133; Avril, Les Fastes du Gothique..., 339-341; and the Commentary to
the Facsimile..., passim.

6 This book did not come into the Duke’s possession until 1407 when his nephew, Louis П d’Anjou,

gave it to him as a present, but it was probably well known to Jean de Berry from his childhood. See

the devotions practised by an earlier generation of the royal family were handed
down to their children.

The importance of fostering a regular life of prayer is explicitly stated in a
series of precepts entitled L’Estimeur du Monde, which occur in the Petites Heures
after the Calendar (fols. 8-15). Written in French, they comment on the Scriptural
text Non solo pane vivit homo, sed in omni verbo quod procedit de ore Dei (“Man
does not live by bread alone but on every word that proceeds from the mouth of
God” [Matt. 4: 4]). The author states that while these teachings are important for all
Christians they are specifically directed to the children of kings, princes and noble
lords. In this context he makes reference to the model Christian king Saint Louis,
whose mother ensured that he was instructed from early childhood by prudent men,
good clerics and wise religious; and the saint’s own Enseignements given before his
death to his eldest son follow on folios 15v-20v.7 L’Estimeur du Monde survives
only in the Petites Heures, but the description of Jean le Bon’s lost Hours shows that
it also appeared there.8 Both the precepts and their illumination are worth exploring
in detail as they establish the context for the prayers which they preface.

After a general introduction which emphasises the need to nourish the spiritual
and intellectual part of man, since it is this which distinguishes him from the beasts,
the precepts address the training of young princes and nobles in regular morning and
evening prayer, in daily attendance at Mass and in the recitation of the Hours. They
also state how rulers should conduct themselves in church. Recourse to prayer and
participation in the ceremonies and Offices of the Church are presented as a per¬
vasive and consistent part of a prince’s daily schedule.

The three miniatures which accompany the precepts indicate their Dominican
authorship. On folio 8 (Figure 69) a prefatory scene shows a friar in Dominican
habit directing the attention of the prince who kneels before him to the heavenly
zone above, where God is surrounded by music-making angels. The friar appears
again as teacher on folio 9V (Figure 70). Here, he counsels the prince to live by the
word of God, the soul’s true nourishment; he must not follow those who think only
of material food and who like Nebuchadnezzar are fit only to dwell with the beasts.9
The friar’s gestures contrast Christ, the bread of angels above, with Nebuchadnezzar,
naked except for his crown, who feeds with the beasts below. That these teachings
are directed both to the younger generation and to their parents is made clear in the
allusion in the text and the final illustration to the punishment meted out to the High
Priest Eli for neglecting to correct the godless behaviour of his sons Hophni and
Phineas (fols. llv-12).10

The same precise and somewhat recondite use of Scriptural exempla and typol¬
ogy appears also in the Calendar of the Petites Heures (Figure 71), long recognized
as deriving from that designed for the Belleville Breviary of Dominican Use