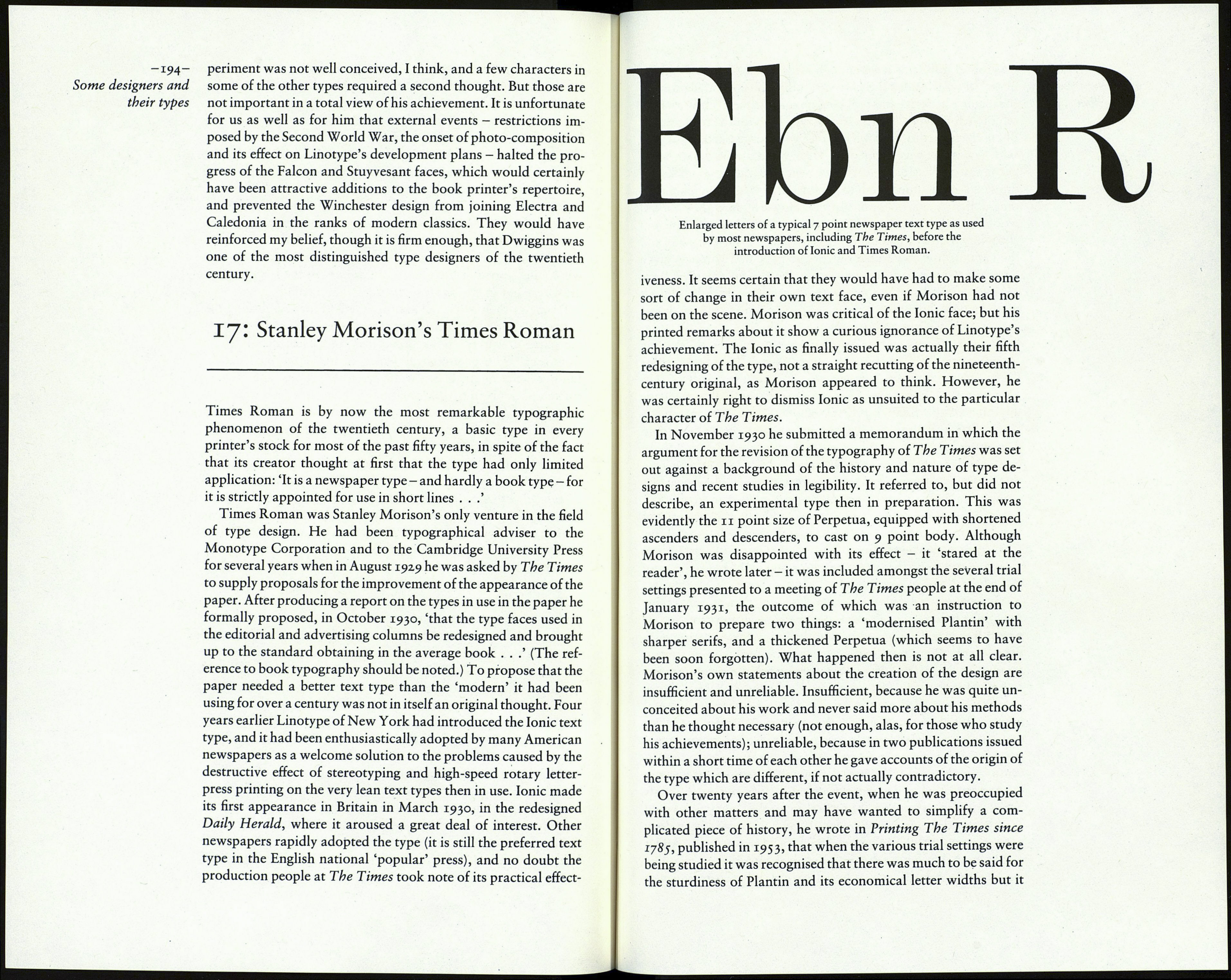 -192- several grounds, including the undesirable one of separating
Some designers and printed English from the printed forms of other major languages
their types which use the roman letter. And English itself is now such a rich
mixture of pickings from other tongues, Mediterranean, Teu¬
tonic and much else, that to propose to represent it by the use of
characters created by scribes working in religious communities in
Ireland and northern England over a thousand years ago makes
no sense at all. Time and space have only been spent on the
subject here because it was described in Postscripts without com¬
ment. But ignoring the uncial letters, there is real value to be had
from a study of the Winchester roman and italic in their orthodox
forms.

The roman was an old style somewhat reminiscent of Granjon.
Apart from a slightly awkward d, the design is not only faultless
but as good as anything Dwiggins ever did; indeed, I think it is
superior even to Electra and Caledonia. Other things being equal,
it would have been one of the finest text types of the twentieth
century. The thing that is not quite equal in quality is the italic, of
which only the lowercase was produced. The f suffered more
than was necessary from its inability to kern, and the v, w and y
have the obtrusive ingrowing stroke which had made its first
appearance in the Charter face.

Winchester made a limited public appearance in Dorothy
Abbe's Stencilled Ornament and Illustration (Hingham, 1979),
the text being set by hand from types cast in a single-type casting
machine from a surviving set of matrices (too few, perhaps, to be
used in the normal way in a Linotype machine). Unfortunately,
the fitting of the characters is much looser than in the original
version of 1946.

Dwiggins was thoroughly professional. For him, the drawing of
the alphabets of a new type was only the beginning of the work,
not the end of it. In 1937, when Linotype commissioned Rudolph
Ruzicka to design a book face (it was the admirable Fairfield),
Ruzicka asked Dwiggins how he set about the task of designing a
type. Dwiggins replied in a letter which he subsequently rewrote
for publication by the Harvard College Library in 1940. 'The way
I work at present [he was presumably referring to his work on
Caledonia] is to draw an alphabet 10 times 12 point size, with a
pen or brush, the letters carefully finished. I start with the
lowercase, and let its characters settle the style of the capitals.
Ten times 12 point is a convenient size to work; arid I have a
diminishing glass that reduces the letters to something like 12
point size when I put the drawing on the floor and squint at it
through the glass held belt high. This gives a rough idea of what
the reduction does to curves and things. Having got a start on
what I want by this means I turn the drawing over to G. [Griffith]
and he puts a few of the characters through — possibly lowercase

h and p. He makes his large pattern drawings (64 times 12 point), -193-
cuts, casts and proves the trial characters; and sends me his large The types
drawings, my 10 times drawings, & proofs on smooth and rough of W. A. Dwiggins
paper. By looking at all these for two or three days I get an idea of
how to go forward — or, if the result is a dud, how to start over
again. From the large pattern sheets I can see just how details
behave when they get down to size, and can change the weights of
serifs, thin lines, etc. etc. accordingly. Curves do all kinds of
queer things when reduced; and the way lines running together
make spots is a thing that will surprise you; but one or two tries
on these points give you the information you need. I am begin¬
ning to get the drift of it and to foresee from the large drawings
what will happen in the type. I can modify in the large outline
drawings, but so far I can't originate in that medium.'

Dwiggins then described another method for establishing the
character of a design. For the Falcon type he made stencils
for parts of letters, at 24 point size, and constructed letters
from them. Those letters were enlarged to the ten-inch size by
Linotype; the enlargements were sent to Dwiggins, and he then
cut templets, at that size, of common elements such as stems,
arches, loops and so on, with which he built up a further range of
characters (a similar method is used by some computer-aided
designers). Examples of Dwiggins's templets can be seen in
Dorothy Abbe's book. His letter to Ruzicka describes the next
stage. 'When G. and I have settled dimensions, etc., to our liking,
I go ahead with the alphabet on thin bond paper in pencil outline,
in the working drawing size . . . My drawing is free-hand (except
in such cases as the Falcon templets). I haven't any complaint to
make about the staff's French curves - they do a surprisingly
faithful job ... so far as I can observe from the final proof they
keep the original touch here too.'

Writing about Dwiggins's ability to design at the ten-inch scale
Jackson Burke, Griffith's successor, said, 'This technique is not
for the ordinary designer. It involves an ability to think in terms
of effects . . .'; and Ruzicka called it an 'unexampled tour de
force in type design'. That is putting it a little too high. Personal
experience has shown that given the opportunity to compare the
large letter drawings with proofs of the characters at actual type
size it is possible, after a. time, to develop fairly reliable judgement
as to what will be the final effect of a letter that is drawn many
times larger than life.

What Dwiggins did not explain was the amount of thought he
put into his type design work at its several stages. It must have
been considerable, because it can only have been from much
creative thought and experimental drawing that the quality of his
designs was derived. Naturally he had his limitations (as we all
have), though he may not have recognised them. The Hingham
newspaper type could not have succeeded. The Tippecanoe ex-