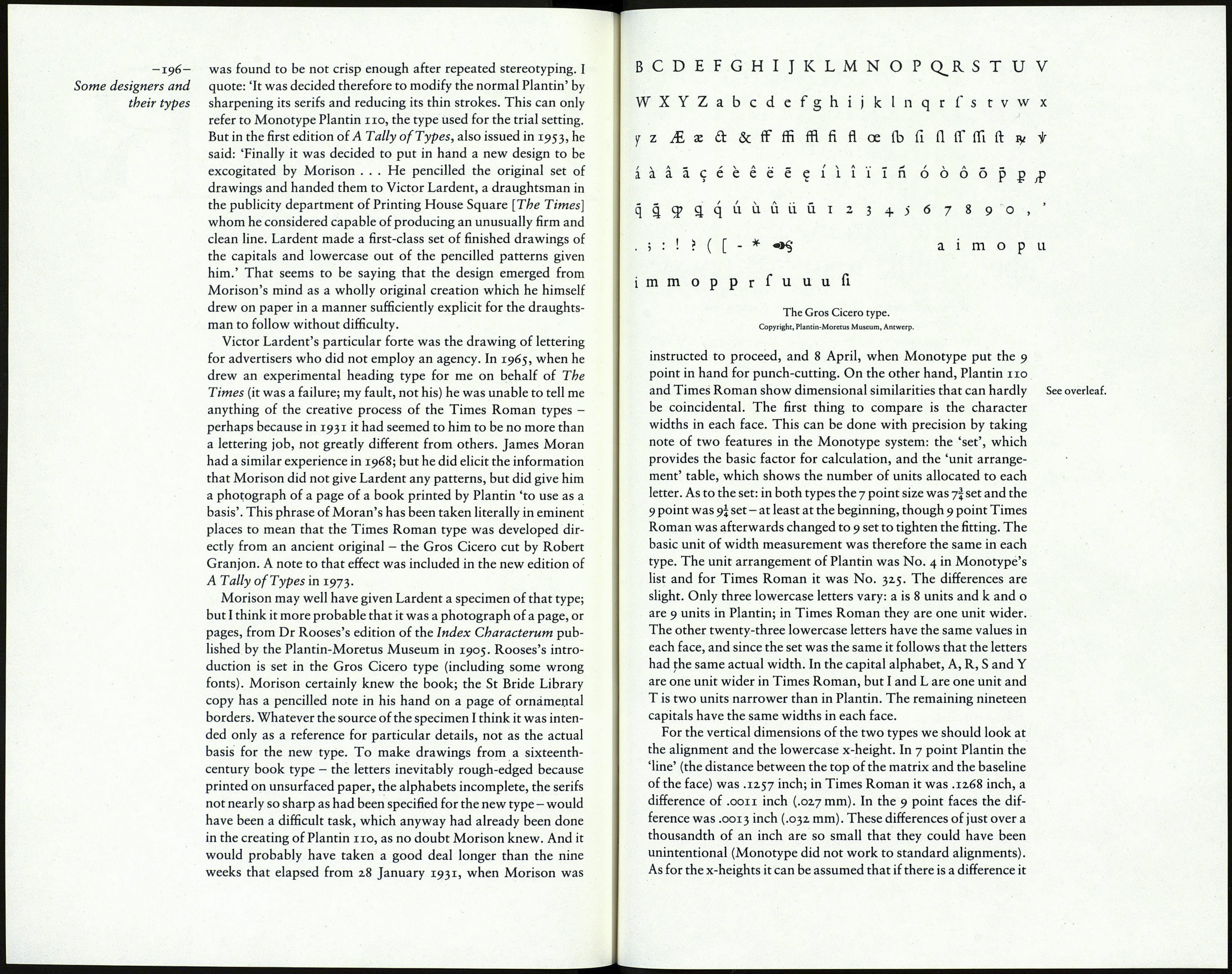 -194— périment was not well conceived, I think, and a few characters in
Some designers and some of the other types required a second thought. But those are
their types not important in a total view of his achievement. It is unfortunate
for us as well as for him that external events - restrictions im¬
posed by the Second World War, the onset of photo-composition
and its effect on Linotype's development plans - halted the pro¬
gress of the Falcon and Stuyvesant faces, which would certainly
have been attractive additions to the book printer's repertoire,
and prevented the Winchester design from joining Electra and
Caledonia in the ranks of modern classics. They would have
reinforced my belief, though it is firm enough, that Dwiggins was
one of the most distinguished type designers of the twentieth
century.

Times Roman is by now the most remarkable typographic
phenomenon of the twentieth century, a basic type in every
printer's stock for most of the past fifty years, in spite of the fact
that its creator thought at first that the type had only limited
application: 'It is a newspaper type - and hardly a book type - for
it is strictly appointed for use in short lines . . .'

Times Roman was Stanley Morison's only venture in the field
of type design. He had been typographical adviser to the
Monotype Corporation and to the Cambridge University Press
for several years when in August 1929 he was asked by The Times
to supply proposals for the improvement of the appearance of the
paper. After producing a report on the types in use in the paper he
formally proposed, in October 1930, 'that the type faces used in
the editorial and advertising columns be redesigned and brought
up to the standard obtaining in the average book . . .' (The ref¬
erence to book typography should be noted.) To propose that the
paper needed a better text type than the 'modern' it had been
using for over a century was not in itself an original thought. Four
years earlier Linotype of New York had introduced the Ionic text
type, and it had been enthusiastically adopted by many American
newspapers as a welcome solution to the problems caused by the
destructive effect of stereotyping and high-speed rotary letter¬
press printing on the very lean text types then in use. Ionic made
its first appearance in Britain in March 1930, in the redesigned
Daily Herald, where it aroused a great deal of interest. Other
newspapers rapidly adopted the type (it is still the preferred text
type in the English national 'popular' press), and no doubt the
production people at The Times took note of its practical effect-

by most newspapers, including The Times, before the

introduction of Ionic and Times Roman.

iveness. It seems certain that they would have had to make some
sort of change in their own text face, even if Morison had not
been on the scene. Morison was critical of the Ionic face; but his
printed remarks about it show a curious ignorance of Linotype's
achievement. The Ionic as finally issued was actually their fifth
redesigning of the type, not a straight recutting of the nineteenth-
century original, as Morison appeared to think. However, he
was certainly right to dismiss Ionic as unsuited to the particular
character of The Times.

In November 1930 he submitted a memorandum in which the
argument for the revision of the typography of The Times was set
out against a background of the history and nature of type de¬
signs and recent studies in legibility. It referred to, but did not
describe, an experimental type then in preparation. This was
evidently the 11 point size of Perpetua, equipped with shortened
ascenders and descenders, to cast on 9 point body. Although
Morison was disappointed with its effect - it 'stared at the
reader', he wrote later - it was included amongst the several trial
settings presented to a meeting of The Times people at the end of
January 1931, the outcome of which was an instruction to
Morison to prepare two things: a 'modernised Plantin' with
sharper serifs, and a thickened Perpetua (which seems to have
been soon forgotten). What happened then is not at all clear.
Morison's own statements about the creation of the design are
insufficient and unreliable. Insufficient, because he was quite un-
conceited about his work and never said more about his methods
than he thought necessary (not enough, alas, for those who study
his achievements); unreliable, because in two publications issued
within a short time of each other he gave accounts of the origin of
the type which are different, if not actually contradictory.

Over twenty years after the event, when he was preoccupied
with other matters and may have wanted to simplify a com¬
plicated piece of history, he wrote in Printing The Times since
178s, published in 1953, that when the various trial settings were
being studied it was recognised that there was much to be said for
the sturdiness of Plantin and its economical letter widths but it