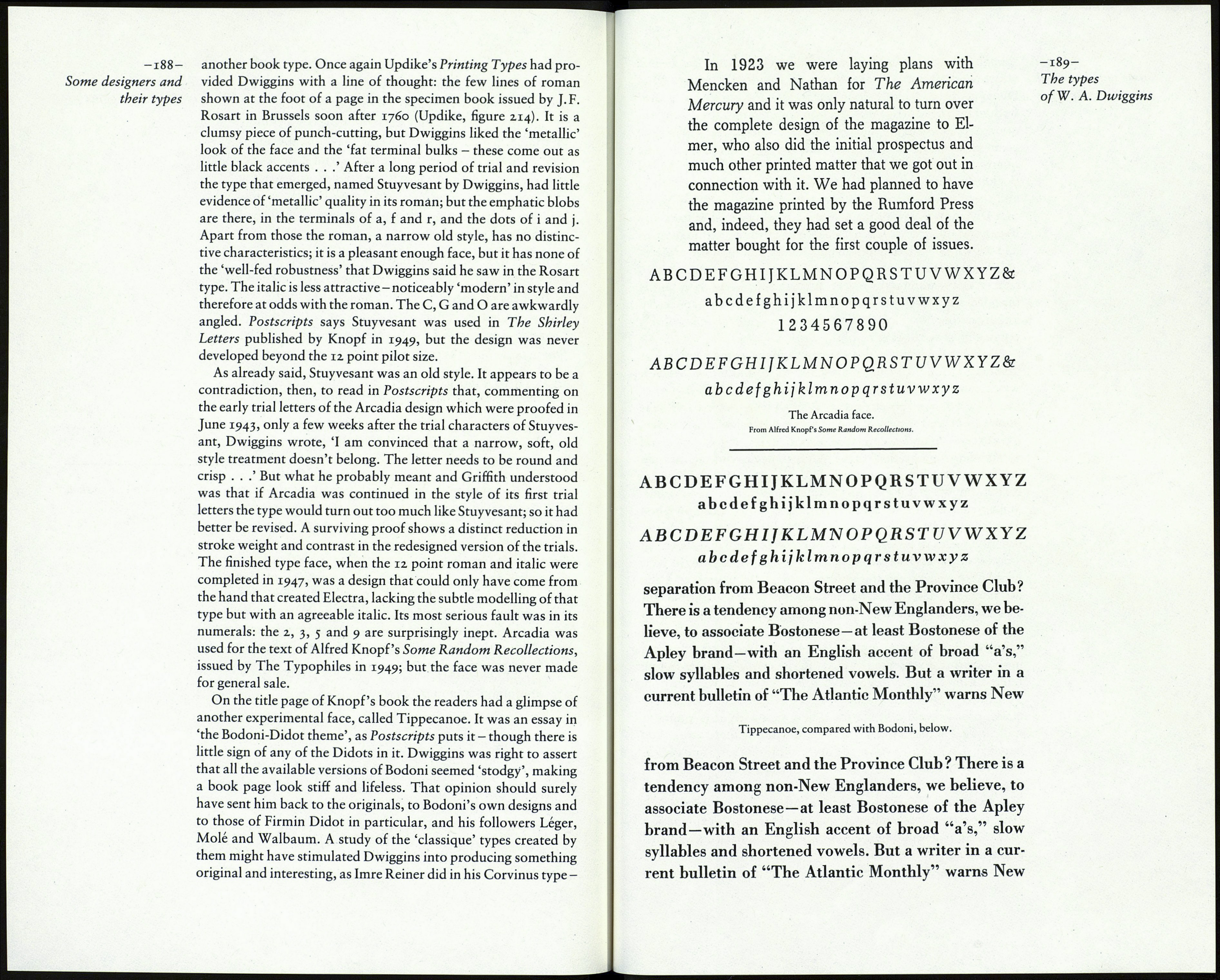 -186- by Geronimo Gil in Madrid about 1787. However, Dwiggins said
Some designers and in a footnote that though the Gil type was talked about it was not
their types condensed enough for the purpose, so he concentrated his atten¬
tion on a type used by Antonio de Sancha in 1774 (see Updike, vol
ii, figure 236). Perhaps Dwiggins was able to borrow a copy of the
original work mentioned by Updike, because the reproduction in
Printing Types is neither clear nor comprehensive. Progress on
the design, which came to be called Eldorado, proceeded a few
characters at a time through the war years until 1953, when it was
announced for sale. In a few letters, the a and g, for example, and
in the strong colour of the face, there is some resemblance to the
Spanish type; but the face is really Dwiggins's own. The roman
made a pleasant effect on a smooth paper, but on ordinary book
paper the soft edges of the letters - due, perhaps, to an incautious
liking for the effect of type printed on dampened hand-made
paper — may have caused some publishers to mutter darkly about
low-grade stereotyping or press work. The italic was wholly
Dwiggins's, and he indulged himself in some fancies: not only the
curly-topped T as in Baskerville's italic, but a crossed X and Z
and a Greek style Y - which was also present in the roman. There
was also a tailed G and a mannered Q. Pretty as all these were,
they may have had a limiting effect on the popularity of the type
for book work.

Except for Metroblack all of Dwiggins's designs were a long
time in development, and for most of the years of his association
with Griffith there were several experiments on hand, in the form
of proofs of trial characters which Dwiggins liked to brood over
at leisure. Falcon was one of a number of designs that took their
time. It began as an experimental cutting in 1939; but evidently it
disappointed the two men. In 1942 a fresh start was made, and
the face was eventually carried through to the completion of
seven sizes of roman with italic. It was an attractive old style
book type, the roman lowercase narrower than that of Electra
and Caledonia and its x-height moderate, which emphasised the
fact that the capitals were in fact a little too tall and obtrusive.
The italic lowercase was mildly calligraphic, much better than
Electra Cursive, except for the v, w and y, which had an inward-
turning flourish that probably looked charming on the drawing
but, to my eye, is irritating in print. For a short time in the 1950s
Falcon was available, on special order only; but it was withdrawn
when attention had to be concentrated on type face production
for photo-composition. Griffith would have been sad; he had
written to Dwiggins in 1942, 'I am determined to carry this
through to a successful conclusion, even if I have to re-cut it a
dozen times!'

Although Eldorado was the last of Dwiggins's types to be
made fully available to the Linotype user, it was by no means his
last design. Early in 1943 Linotype cut the first trial characters of

Paper . . Paper has more to do with making a com¬
fortable book than any other single thing. If a book is
printed on a satisfying paper it will be tolerable even
though the type-face and press-work are shockingly
inferior. On the other hand you may use the finest
type available, arrange it with taste, print it to perfec¬
tion—and still your book will be spoiled as a reading
implement if the one point of paper has been mis¬
handled. Appreciation of books begins with the ap¬
preciation of paper.

Arrived from China by caravan across remote fron¬
tiers, bales of a strange fabric consigned to merchants
in Arabia and eagerly awaited there—fibers of cellu¬
lose shredded in "water, shaken into a felt, and dried
flat and smooth so you could write on it. A remarkable
fabric, valuable to savants seeking to set down in script

meet a dwarf waving a fiery dart which burns up every¬
thing around it within twenty paces of the apple-tree from
which I must pluck an Apple. If I escape the flames and
get the Apple, I shall have to go in search of the Laughing
Flower, but to pluck this I must beguile a lion whose mane
is of living snakes. I shall wait till the lion sleeps (the
snakes are for lake, and on reaching the thither side a fight
will begin between me and the Black Man, whose weapon
is an iron ball that returns of itself to the master after every
throw. After that I shall enter the Valley of Delights to

Falcon roman and italic.
From a trial proof (the text
by Dwiggins himself).

Stuyvesant roman and italic.
Note the revision of
italic v and w.